A fashion designer who didn’t recognise her own mother for five months as she lay in a hospital bed with brain damage after being hit by a police car has opened up about her painful rehabilitation.

Caroline Breure was holidaying in Barcelona with her ex partner Johan when she was struck at a pedestrian crossing by a cop car with flashing lights but no siren on September 9, 2019.

The 35-year-old, who was born in Brazil but had been living in Sydney’s eastern suburbs, suffered debilitating head injuries when she was propelled 13 metres over the bitumen.

Despite spending four months in a coma and two years learning to walk and talk again, Ms Breure travelled to the Gold Coast by herself this week and has almost made a full recovery.

Pictured: Caroline Breure, who was hit by a police car while holidaying in Barcelona, Spain, in 2019 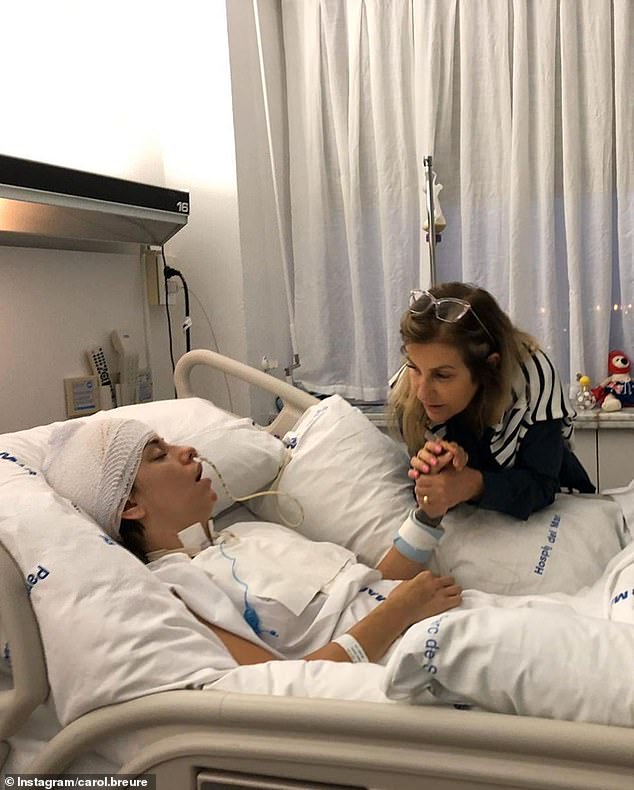 Pictured: Ms Breure in hospital with her mother Juceli, who flew to Spain to be by her side

‘I used to travel around every year,’ she wrote on Instagram.

‘Although I can’t travel on the world due to Covid, it was amazing to see my friends – especially the ones I haven’t seen for so long and who knew about my recovery.’

Ms Breure was in a Spanish hospital for seven months and was relocated to Brazil for five months, before she was finally moved to an Australian hospital in September 2020 – one year after the accident.

Her mother Juceli immediately flew from Brazil to be by her daughter’s side and did not leave throughout the intensive recovery process.

In a series of emotional Instagram posts, Juceli told Ms Breure: ‘You opened one eye after one month, then you started making signs with your right hand. You moved your legs a lot but you didn’t shake our hand when we asked.’ 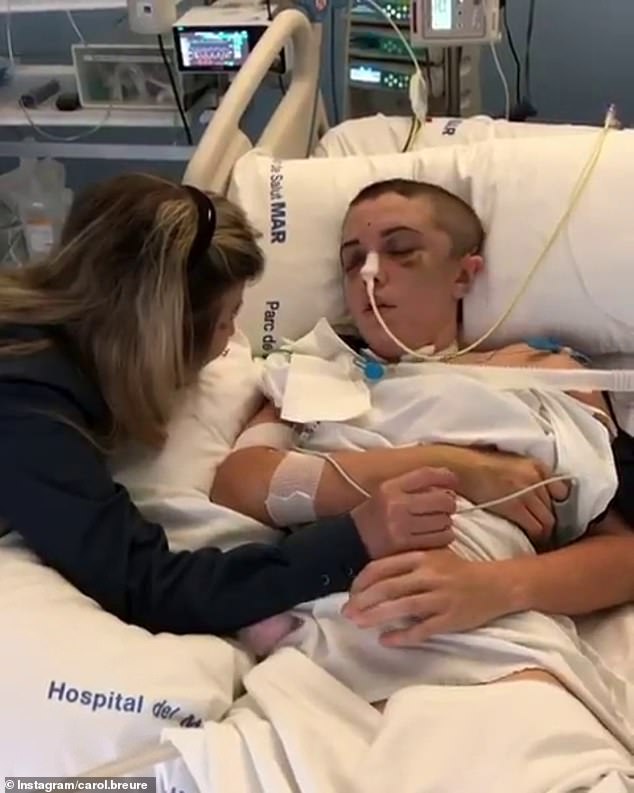 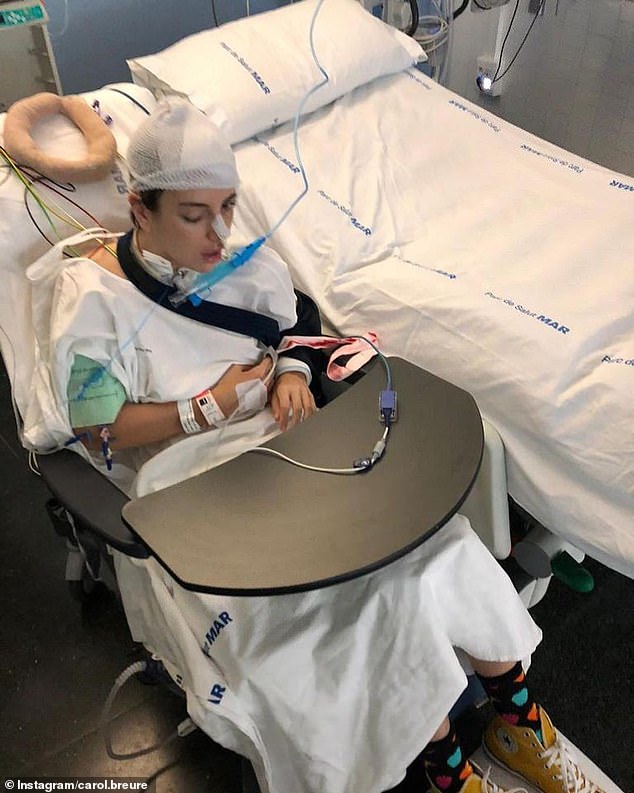 Pictured: Ms Breure during her recovery. She could only open one eye and had to learn to walk again

‘I don’t believe that you only started to recognize me as your mum at the end of January or February. I knew this because you treated me like a stranger you didn’t know.’

Doctors also gave Juceli the heartbreaking news that her daughter may be blind, wheelchair-bound, lose the ability to use her right arm, and that she might have a completely different personality.

‘I cried a lot,’ the mother-of-one wrote on social media. I was desperate without a floor.’

She told health experts, ‘you don’t know my Caroline. I’m sure Caroline will fight until she gets 100 per cent better’. 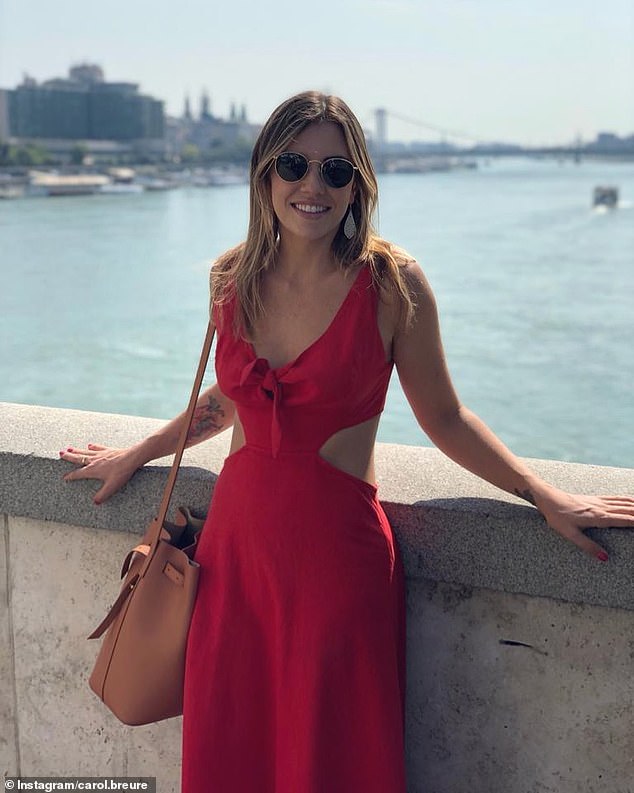 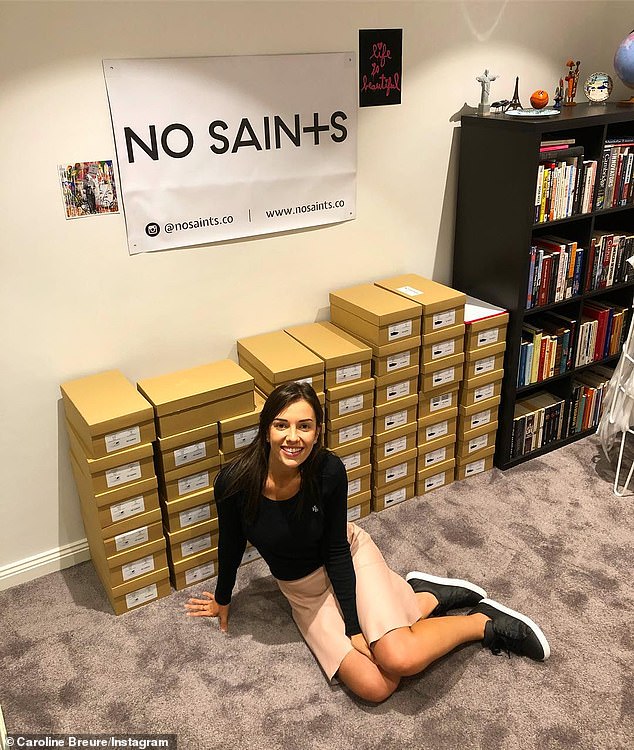 Ms Breure grew up in Brazil and moved to Australia five years ago. She launched No Saints with her ex partner Johan in 2018 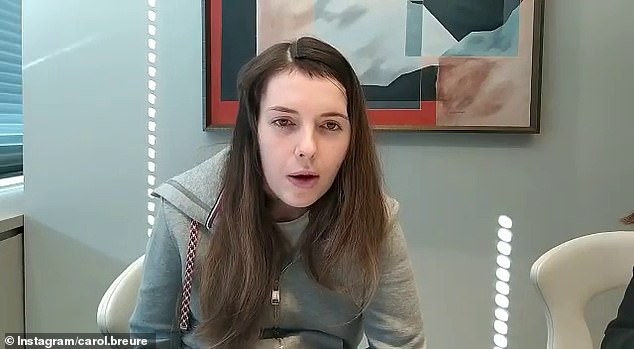 Pictured: Ms Breure trying to speak during her recovery in 2020. She would babble and make up words

After undergoing several surgeries, including having part of her skull removed to help reduce the swelling of her brain, Ms Breure was left with aphasia – which means she was unable to speak, read, write, and understand what others are saying.

When she did speak, she babbled like a baby and could not properly communicate with anyone.

The designer shared a series of photos on social media that show her smiling with family members throughout her recovery, but in the captions she explained she was unable to understand what anyone was saying during those times.

‘When I was still in Brazil with my mum and dad’s apartment, there was not much to do because I couldn’t understand anything on TV or in books – it didn’t matter if it was Portuguese or English,’ she wrote.

‘I thought: Why are all my friends in Australia and I’m in Brazil?’ 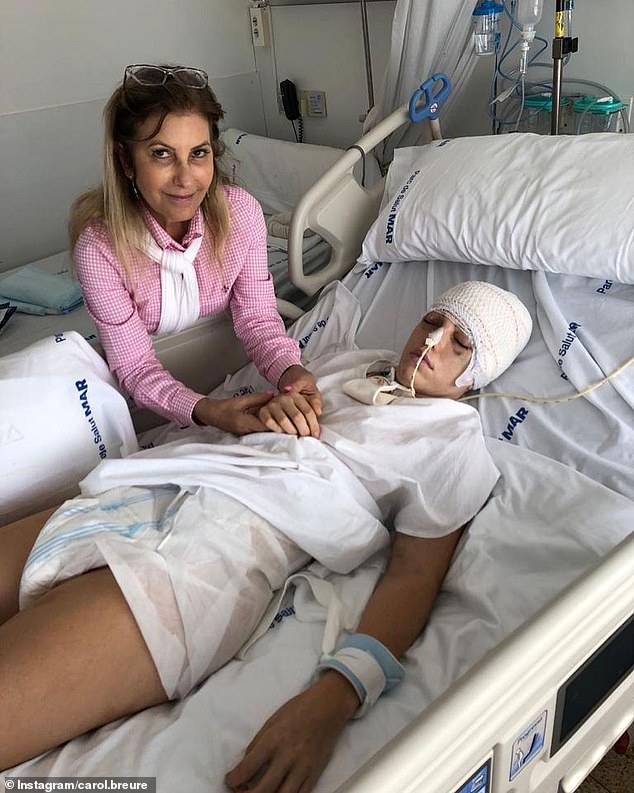 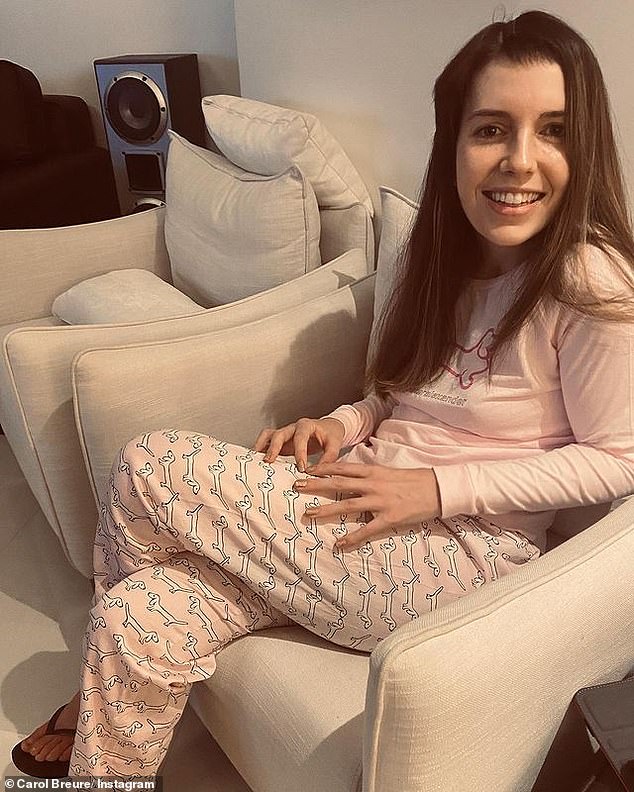 Ms Breure shared series of photos on social media that show her smiling throughout her recovery (pictured), but she explained she was unable to understand what anyone was saying during those times

It took her more than a year to comprehend her accident, and she didn’t know Covid-19 had swept across the world until late 2020.

The condition improved over time and she can now read, write and understand almost everything, but she still sometimes struggles to find the right words sometimes.

Ms Breure said her old speech therapist in Brazil follows her on Instagram and is impressed with her progress.

Following the accident, friends set up a Go Fund Me campaign to help pay for her recovery. 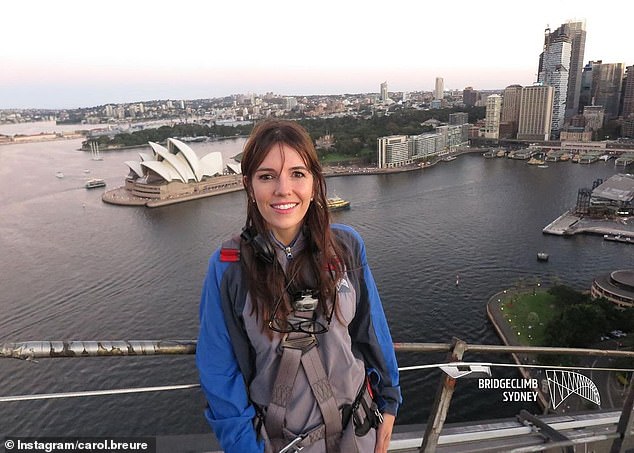 In April this year, Ms Breure and her former boyfriend Johan climbed the Sydney Harbour Bridge together 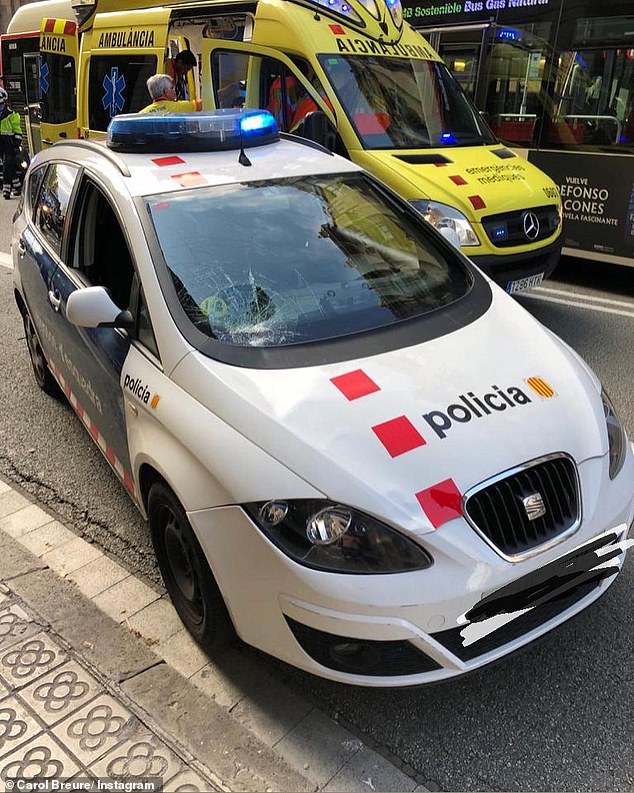 Pictured: The police car that hit Ms Breure and changed her life. She spent two years in recovery

‘All donations will help give Caroline a fighting chance to recover and lead a normal life, as well as provide her mother the financial support that she needs to provide care on a full time basis for her only child.’

Ms Breure grew up in Brazil, and moved to Australia seven years ago.

She met Johan in 2017, and quit her job a year later to launch her shoe company No Saints with him.

No Saints prides itself on ethically produced shoes, using faux leather products and workers in Portugal, where the company say their workers are paid fair wages.

While Ms Breure and Johan’s romantic relationship crumbled in the years following the accident, the pair are still good friends.

In April this year, they climbed the Sydney Harbour Bridge together.