Father, 43, notices a grape-sized cancerous lump on his neck while reading a GCSE biology textbook

A teenager saved her father’s life after asking him to help her study for her GCSE biology exam when the pair ended up detecting a cancerous lump on his neck.

Alice Jenkyn, now 17, had asked her father, Jonathan, to help her study for her exams in May last year.

When she struggled to remember where her lymph nodes – glands – were located, Mr Jenkyn, 43, showed her by pointing them out on his own neck.

But as he did so he noticed a grape-sized lump he’d never felt before.

He immediately made an appointment with his GP and within weeks was diagnosed with metastatic throat cancer in a tumour below his jaw.

The father-of-five, from Ipswich, Suffolk, was quickly put through intense chemotherapy and radiotherapy for six weeks before being given the all clear.

But doctors warned that if he hadn’t caught the lump as such an early stage, he probably wouldn’t have lived to see 2020.

Jonathan Jenkyn and his daughter, Alice, were using his neck to demonstrate where the glands are when they noticed one was swollen. It later turned out to be a cancer they had spotted

‘It was luck of the draw that we picked the lymphatic system to cover that evening, and I’m extremely glad that I helped her on that day with her schoolwork,’ said Mr Jenkyn.

‘I often help my kids with their revision and homework but this was really lucky.

‘Alice struggles with science which I did quite well in, but it was pure luck that we happened to be studying something that would lead to discovering the lump.

‘I was demonstrating for her where the lymph nodes are in a body and pointing to my own to show her, as I was showing her where to find them I just felt a grape sized lump in my neck that I hadn’t noticed before.

‘We had a brief discussion as to what it could be at the time and I explained that the lymph nodes can get inflamed for non-urgent reasons but I promised her I would get it checked out and its lucky I did.

‘She passed her Science GCSE too, so clearly the revision helped both her and I in many way, we’re very proud of her.’

Alice added: ‘I didn’t expect my revision to have such a huge effect on our lives, and I feel guilty about not noticing the lump myself but I’m so happy we found it.

‘It’s great that he’s better and back at home, it was really difficult to see him so ill and the seriousness really hit me hard when I found myself feeding my dad – but its nothing he hasn’t done for me in the past.

‘We’re just happy that he’s ok, and of course that I passed the science exam.’ 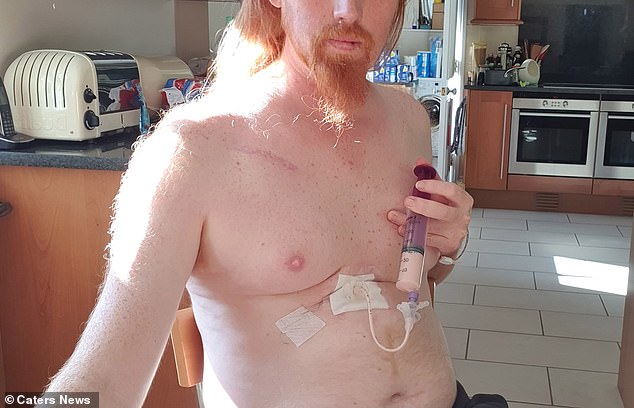 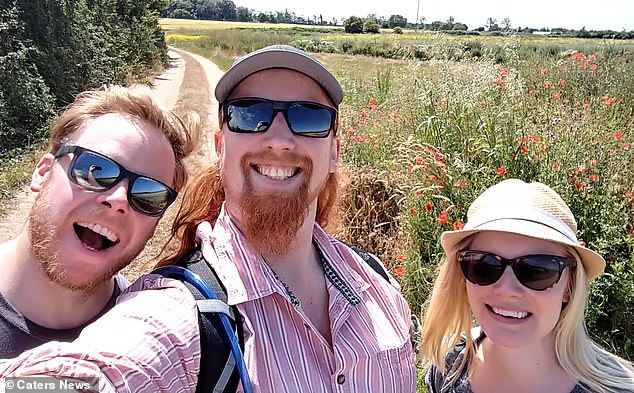 Mr Jenkyn, pictured with his brother Peter and wife Vicky, was told by doctors that he could have died if he hadn’t noticed the cancer in its early stages

Despite brushing off the lump as a bit of swelling, Mr Jenkyn made an appointment to see his GP, who told him to go back if it got any bigger.

The lump had grown within a week – prompting concerned doctors to order a biopsy and make the devastating diagnosis.

Mr Jenkyn was immediately put on intensive course of radiotherapy and chemotherapy throughout the summer.

And last week he was given the good news that he was cancer free.

He added: ‘It was really scary, but I was given a fairly clear route to getting better and tried to keep out of my head as much as possible.

‘I was told if I had not of spotted the lump I wouldn’t have seen the new year, it really is quite crazy that a bit of revision with my daughter became the reason I survived an illness as serious as cancer.

‘Ipswich hospitals radiotherapy team were incredible, I was treated like a prince from start to finish, I can’t thank them enough for everything they’ve done for me.’

He said: ‘I thought it was nothing, maybe just am inflamed lymph node but thought it would be best to get it checked out.

‘I certainly wasn’t expecting it to be cancer.’ 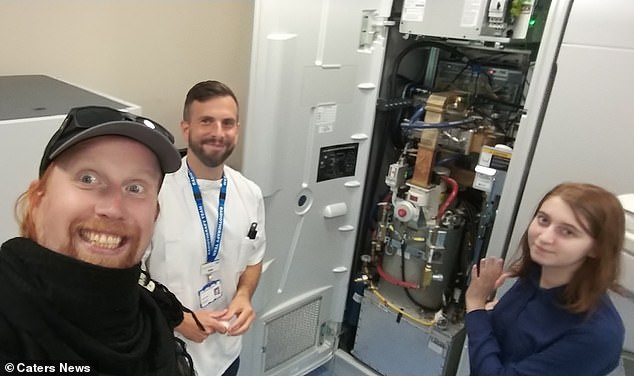 Mr Jenkyn, pictured with Alice during a radiotherapy session, said: ‘I thought it was nothing but thought it would be best to get it checked out. I certainly wasn’t expecting it to be cancer’

‘Don’t get me wrong, although I am better the whole experience has been unimaginably difficult, but my family stuck with me all the way through and I’m starting to feel normal again.’

After being told he was better, Mr Jenkyn has been fundraising and so far has raised over £2,000 which will be donated to the radiotherapy department at Ipswich hospital to make improvements for future patients.

He added: ‘I can’t believe how much has been raised but everyone has been amazing, we’ve raised an amazing amount already which continues to grow and will ultimately be given to the people who essentially saved my life.

‘I suppose the biggest lesson to take from this is to always help your kids with the GCSE revision.’