More than 100 visitors have reported sustaining injuries on the same water slide at Universal Orlando’s Volcano Bay that allegedly paralyzed a New York man last year, a lawsuit filed by the tourist has revealed.

James Bowen, 47, of New York filed a lawsuit against the Florida water park in October last year after he violently slammed his head in a shallow wading pool on the Punga Racers water slide in July 2019.

The father-of-three said the incident left him paralyzed. He said was left lying face-down in the water until his wife and a Universal employee rescued him, the suit says.

Now, new court documents recently released as part of the on-going suit have revealed that at least 115 other guests were injured on Punga Racers between 2017 and 2019, the Orlando Sentinel reported.

Some of the afflicted guests suffered minor scrapes and nose bleeds, but others reported more severe injuries, including concussions and whiplash. Two ride safety testers were also hurt, documents show.

James Bowen of New York filed a lawsuit against the Florida water park in October last year after he violently slammed his head in a shallow wading pool on the Punga Racers (above) water slide in July 2019.

Under Florida law, large theme parks are only required to report ride injuries to the state where a visitor has been hospitalized for 24 hours or more. Since Punga Racers opened in May 2017, Universal has only disclosed one person being seriously hurt, which is Bowen.

‘More than 1.5 million guests have experienced this ride, with Mr. Bowen’s injury being the single, reportable one,’ Universal spokesman Tom Schroder told the Sentinel in a statement.

‘That said, we take every injury seriously and have a safety-first culture that places the safety of our guests and team members above everything else. When there is an injury of any kind, we immediately begin an investigation and review.

‘Our process is rigorous and detailed and there are often many opinions as we arrive at a conclusion or work to resolve an issue,’ the statement continued. ‘We are confident in our process and in the safety of our rides.’

Bowen had been riding the Punga Racers Black Track 13 on July 11 last year when he reached the ‘run out section’ of the ride and collided head-first into a wave, causing his neck to snap-back violently.

Immediately, Bowen felt a numbness and ‘complete weakness to all extremities’, the suit says. He was reportedly conscious at the time and terrified that he may drown as he was completely unable to move.

‘He was paralyzed while riding a water slide at Universal’s Volcano Bay in a way that Universal could absolutely foresee because during testing for the ride before it opened up, a test rider was injured in the exact same way, and they decided to open the ride anyway,’ Bowen’s attorney David Buckner said during an April 28 court hearing, according to transcripts.

As part of the lawsuit, which is seeking $15,000 in punitive damages, internal messages from Universal raising concerns about the slide are disclosed, in addition to safety reports from its designer, ProSlide.

Two Universal spreadsheets are also included, documenting visitor injuries on the slide over a 13 month period, spanning between the May and October of 2017 and from the end of 2018 to July 2019. 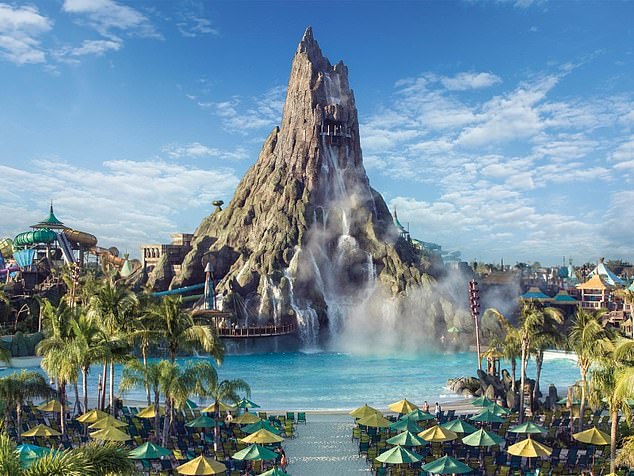 Under Florida law, large theme parks are only required to report ride injuries to the state where a visitor has been hospitalized for 24 hours or more. Since Punga Racers opened in May 2017, Universal has only reported one person being seriously hurt, which is Bowen 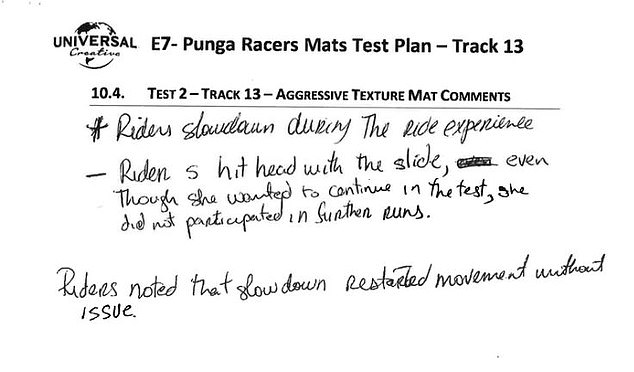 During a run of safety tests in October 2018, a female ride tester struck her head. ‘Even though she wanted to continue in the test, she did not [participate] in further runs,’ a Universal report discloses

As reported by the Sentinel, those documents were marked confidential and sealed by an Orange Circuit Court judge on Wednesday. They were previously accessible to the public via the court’s website, however.

‘As Universal works to reopen its parks by reassuring the public that the company takes safety seriously, these documents prove otherwise. And that is the real reason Universal is desperate to conceal them,’ Buckner wrote in a June 23 filing.

Punga Racers first opened in May 2017, with its first recorded guest injury occurring at 7:45pm that same day.

Filed by a female ride, the guest said she hurt her back when she ‘collided with a wall of water at the catch pool’.

The woman complained about feeling ‘a lot of pressure’ on her back, according to the documents observed by the Sentinel.

In total, 22 visitors were injured at Punga Racers from May 2017 to October 2017, according one of the spreadsheets. Eight of those complaints pertained to neck or back pain.

One person also suffered a concussion toward the end of the ride when a wave of water slammed into the mat he was riding on and struck him in the head.

By November the same year, Universal closed the slide to undergo a series of adjustments, with ProSlide extending the two outer lanes to help slow down the riders, according to a company report in the court file.

Emails shared between Universal and ProSlide disclosed as part of the filing show that Universal assistant director of mechanical engineering Ed Rawlings wrote he took ‘exception’ on testing documents that gave Punga passing marks when the ride had failed some safety tests.

During one of the testing cycles, a ride tester was injured when the mat bounced back into his face and snapped his head back. The severity of his injury was not disclosed, but he returned to work later the same day after being checked-out by first aid.

In a separate exchange of messages, two Universal employees with backgrounds in mechanical engineering appeared to voice doubt over the ride’s safety.

Writing that the ride was improving, the worker continued, ‘but I doubt [it’s] where we want to be. [I’m] not sure [I’m] the one to make the call though,’ adding that ‘I know ops was pushing to have it open today’.

During November 2017 testing cycle, a ride tester was injured when the mat bounced back into his face and snapped his head back

In October 2018, Universal did more safety testing looking at the riders’ weights and a different textured mat that was supposed to slow down the ride and help it move more smoothly at the end into the catch pool, the Sentinel reported.

During that run of tests, a female ride tester struck her head. ‘Even though she wanted to continue in the test, she did not [participate] in further runs,’ a Universal report discloses.

In the months that followed, a Universal spreadsheet indicated that 93 injuries were reported by guests from December 30, 2018, until July 11, 2019.

Once again, the injuries varied in severity. A 40-year-old man chipped his upper front teeth when he was struck in the face by the mat on New Year’s Eve 2018.

A 70-year-old man was hurt the following month after the mat fell from under him as he rode the slide, causing him to strike his head on the slide’s wall.

Bowen, meanwhile, of Wappingers Falls, underwent extensive therapy in the wake of his accident and was relearning how to walk short distances on crutches, according to his original filing last year .

None of the Punga riders hurt in 2017 were hospitalized, according to Universal’s first spreadsheet in court records.

It’s unclear how many people might have sought hospital treatment from December 30, 2018, to July 11, 2019, as that spreadsheet doesn’t specify, according to the Sentinel.

Most of the incidents were however rated as a three or a four under ‘ride severity’ – except for Bowen’s case, which was ranked as a 10.

The court documents don’t include any information on any ride injuries for the gaps in 2018, 2019 or for any recorded this year.

Punga Racers recently underwent a ‘lengthy refurbishment’, reopening this some as a body slide without mats. Riders are also now required to ride feet-first, rather than head-first.

Volcano Bay was reported to be the seventh busiest water park in the world last year, recording an estimated 1.8 million visits.