A father whose heart stopped five times on his birthday was rescued by his daughter who performed life-saving CPR despite having never done first aid before.

Gary Heeks, 57, had been celebrating this April with his eldest daughter, Rachael, 37, and wife, Val, 55, when he went into cardiac arrest.

Rachael, a tax senior, gave Mr Heeks CRP for 30 minutes while tears streamed down her face, instructed by the 999 call operator.

Paramedics arrived and father-of-two Mr Heeks was rushed to hospital, where doctors performed a critical five hour surgery to restart his heart into a normal rhythm and fit a temporary pacemaker.

Mr Heeks was in a coma on life support for two weeks and technically died for five minutes. Doctors advised the family to turn off his life support machines – but it wasn’t an option for his beloved wife.

A ‘miracle’ recovery meant the retired estate manager was on his feet a week later. He now takes every day as a blessing. 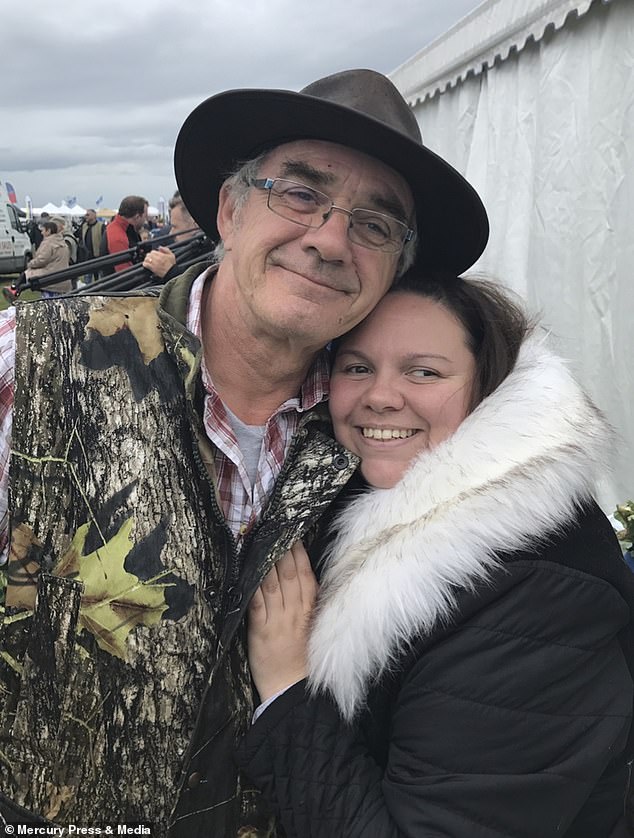 Daughter, Rachael, 37, gave Mr Heeks CRP for 30 minutes while tears streamed down her face. She had never performed first aid before and has been described as a hero 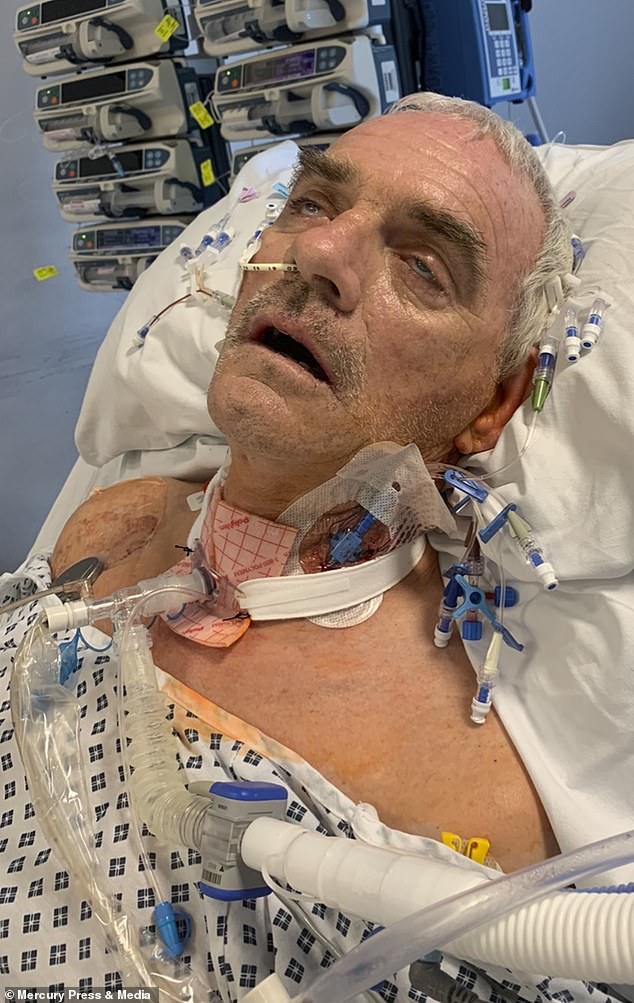 Mr Heeks, from Henley on Thames, Oxfordshire, was in a coma on life support for two weeks (pictured) and technically died for five minutes on the operating table

Mr Heeks, from Henley on Thames, Oxfordshire, said: ‘We had a birthday dinner and I just looked at Val and said “I don’t feel right at all”, and that’s the last thing I remember for two weeks.

‘I had the first cardiac arrest at home, I was technically dead on my birthday until Rachael re-started my heart by doing CPR

‘I was born on that day and I thought it would be my death day, but I survived.

‘I shook off the Grim Reaper, but I still think about the fact it all happened on my birthday, it’s just bizarre.

‘Rachael will always be my hero because if it wasn’t for her I wouldn’t be here, she did me proud and she learned a good life lesson that day too.’

Hero Rachael added:  ‘Many people tell me how I saved him but to me it’s not a heroic thing, it’s just something that you do for someone that you love.

‘I feel very lucky that I still have him here, we have been given more time together.’

A cardiac arrest is when there is an electrical disturbance in the heart which stops it from pumping blood around the body.

It is different to a heart attack – when blood flow to a part of the heart is blocked.

CPR is cruicial for saving someone’s life if they are having a cardiac arrest – there are more than 30,000 out of hospital cardiac arrests every year in the UK, and the survival rate is eight per cent. 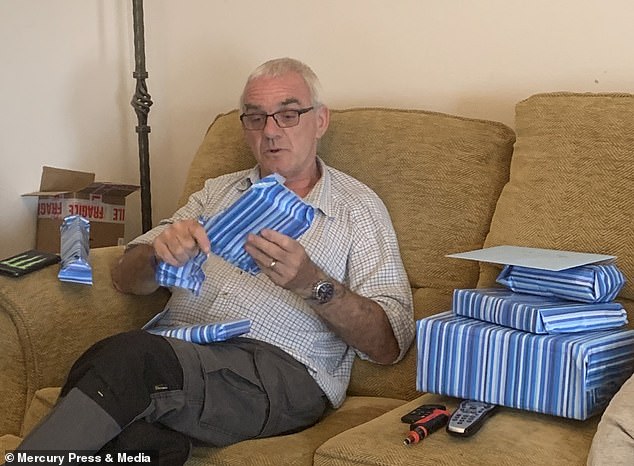 The family had had a ‘lovely day’ celebrating Mr Heeks’ birthday. He is pictured opening presents hours before the first cardiac arrest 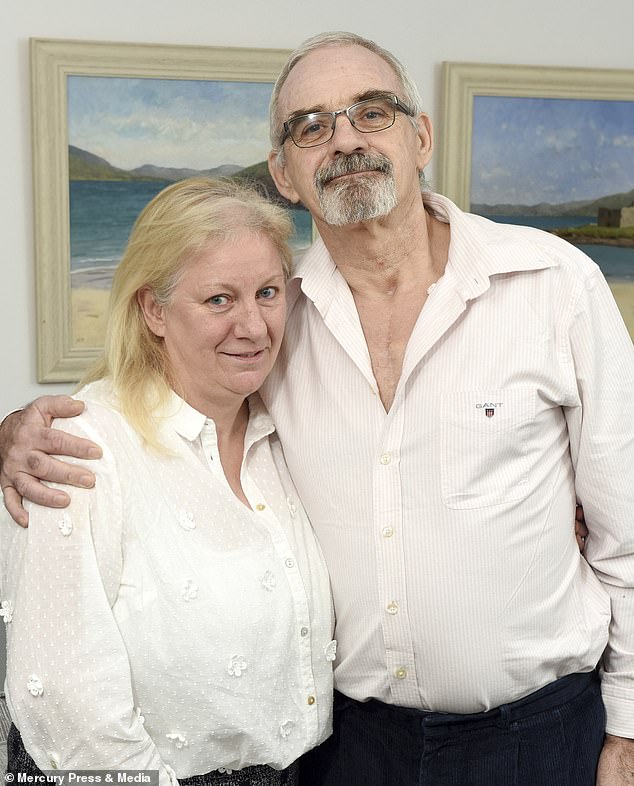 Doctors advised the family to turn off his life support machines – but it wasn’t an option for his beloved wife, Val, 55 (pictured)

On the morning of Mr Heeks’ birthday, he had suffered chest pains and felt very tired – signs of a cardiac arrest that may occur before.

Raheal said: ‘We’d had a lovely day, dad had a little sleep because he wasn’t feeling well but when he woke up he still didn’t feel right.

‘All of a sudden I could see the colour draining from his face, I knew something wasn’t right and told mum to call the ambulance.

‘Then he just stopped breathing.

‘As mum was on the phone to the operator we were told to get him on the floor and I started doing the CPR – I was doing it for nearly half an hour.

‘I was crying my eyes out the whole time I was doing it.

‘I’d never done first aid, the paramedics were telling me what to do. It was just horrific. There was no life in his body at all.’ 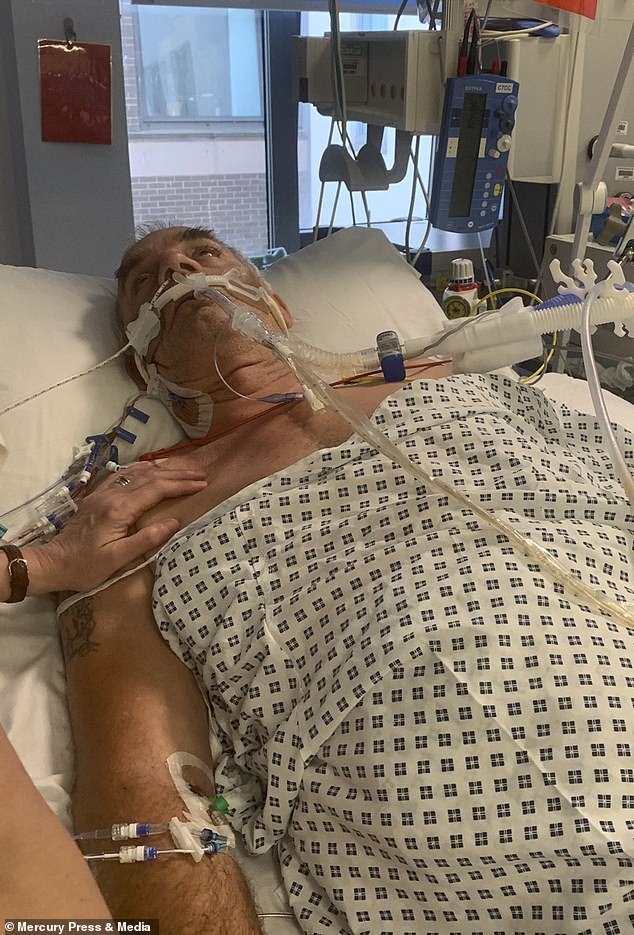 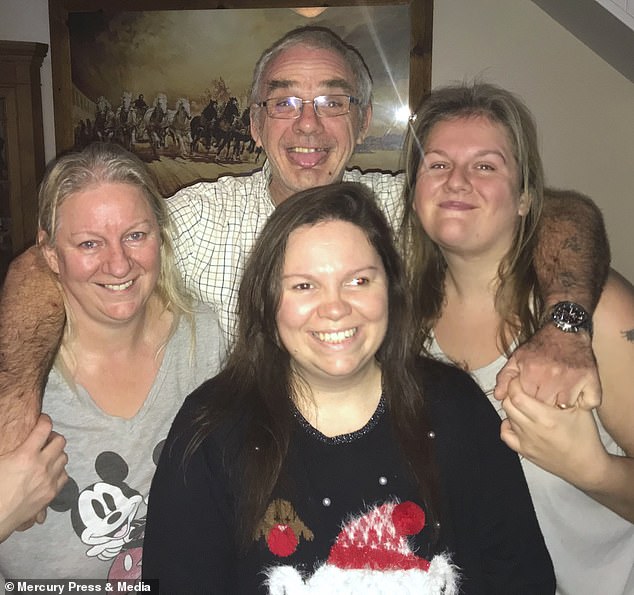 The family, including younger daugher Claire, 35, claim they were advised them to turn off Mr Heeks’ life support because his brain had been starved of oxygen

When he got to the hospital, Mr Heeks suffered another four cardiac arrests – and died on the operating table for five minutes while surgeons fought to bring him back.

WHAT IS A CARDIAC ARREST?

A cardiac arrest occurs when the heart suddenly stops pumping blood around the body, which is usually due to a problem with electrical signals in the organ.

This causes the brain to be starved of oxygen, which results in sufferers not breathing and losing consciousness.

Cardiac arrests are different to heart attacks, with the latter occurring when blood supply to the heart muscle is cut off due to a clot in one of the coronary arteries.

Drug overdose and losing a large amount of blood can also be to blame.

Giving an electric shock through the chest wall via a defibrillator can start the heart again.

In the meantime, CPR can keep oxygen circulating around the body.

During the cadiac arrests, Mr Heeks brain was starved of oxygen and doctors warned his family he may have brain damage.

The family claim they were advised them to turn off his life support. But, despite their doubts, Mrs Heeks insisted they keep the machines on.

Within a week after waking up Mr Heeks had learned to read, write, walk and talk again.

Rachael said: ‘In hospital, he had another four cardiac arrests at the hospital and they told us he had a heart of an 80-year old.

‘A couple of doctors turned around to us and said it would be best to let him go.

‘My mum just looked at my sister, Claire and I, and then back at the doctor and said as long as “I have got breath in my body you keep this man alive”.’

During his three-week stay in hospital Mr Heeks was kept alive by machines that helped him to breathe and his heart to beat.

He was given therapeutic hypothermia, which is when doctors wrap a patient in ice cold wraps in order to raise the chance they will wake up after cardiac arrest.

Lowering the body’s temperature is a tool for reducing brain damage, although it is not clear how it works. 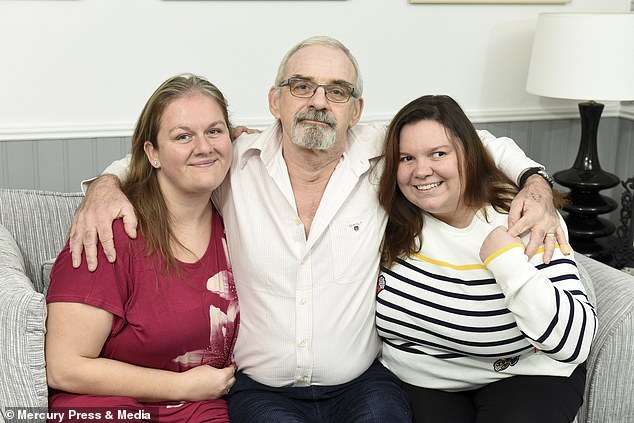 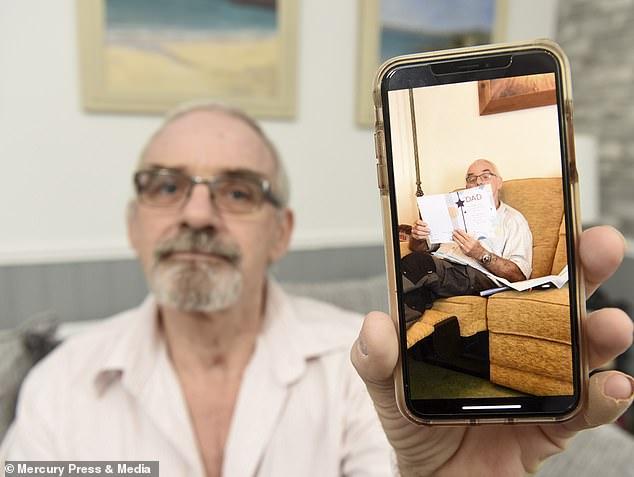 Mr Heeks, pictured holding an image of him opening cards on his birthday, said: ‘I was born on that day and I thought it would be my death day, but I survived’

Today Mr Heek’s heart is still only working at 18 per cent capacity and has a device fitted which shocks it into action when it stops producing a pulse.

But while he can’t do gardening and must take 14 tablets a day, he insists every day is a blessing.

He said: ‘In hospital, one of the doctors in the hospital said “he will be lucky if he makes his next birthday” – when I heard that I sat in the bed and had a bit of a breakdown, it really hit me.

‘But then I decided to be more positive and now I want to go back just to and prove the doctors wrong and show them I’m still here.

‘I feel very lucky to still be here.

‘It scared the hell out of me, and now I just take each day as it comes. Every day I get is a blessing.’

For Rachael, the ordeal has brought her even closer with her ‘one in a million’ dad.

She said: ‘He made a miracle recovery.

‘He had to learn to write, talk and walk again but he did it in such a quick amount of time.

A spokesman for Oxford University Hospitals NHS Foundation Trust said: ‘We’re delighted to hear that Gary has made such an incredible recovery, and wish him all the very best.’