The nation’s top infectious disease expert warned that the spread of the Indian ‘Delta’ coronavirus variant is causing cases to increase across the country.

In an appearance on CBS This Morning on Monday, Dr Anthony Fauci classified the variant, which accounts for more than half of all new infections, as ‘a real bad actor virus.’

He told host Gayle King that the speed at which the Delta variant is transmitting is very worrisome.

‘The concern is, first of all, the virus itself can transmit much more readily from person to person. We know that from experience in our country as well as in several other countries so you’re dealing with a real bad actor virus,’ he said.

Fauci, the director of the National Institute of Allergy and Infectious Diseases said – with only 48 percent of Americans fully vaccinated against COVID-19 – that a large segment of the population is now left vulnerable to infection from the variant.

‘Given the number of people in the country who are not vaccinated, that really is the concern because the vaccines we have available…do very well against the Delta variant, particularly protecting against severe disease leading to hospitalization,’ he added.

‘We’re concerned about those regions of the country, those states, those areas, those cities in which the level of vaccination is really quite low, hovering around 30 percent or so.’

It comes as the U.S. sees a rise in COVID-19 infection rates, recording 6,164 new cases on Sunday, a 30 percent increase from the 4,739 recorded last Sunday.

Last week, the country reported 135,802 new cases. That’s the fifth day in a row the weekly total has hit six figures and a 45 percent spike from seven days ago when 93,134 cases were recorded in a week.

What’s more, states such as Missouri and Arkansas – which have among the lowest vaccination rates in the country – are seeing the highest weekly case rates per capita as the Delta variant tears through their communities.

Dr Anthony Fauci, the nation’s top infectious disease expert, referred to the Indian ‘Delta’ Covid variant as a ‘really bad actor virus’ on CBS This Morning on Monday (above) 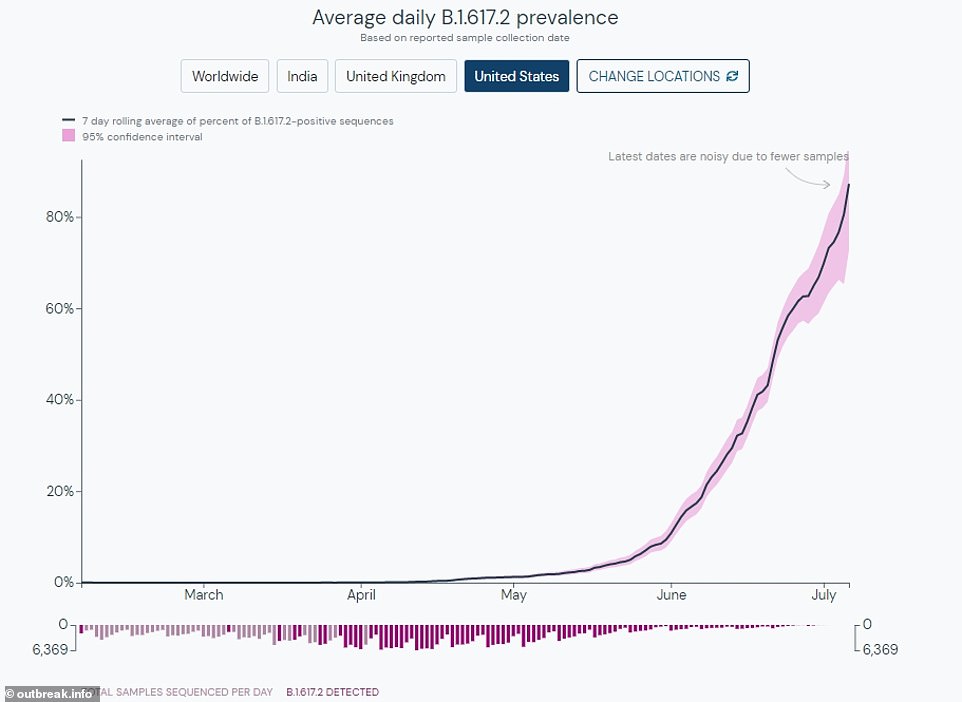 Fauci said the spread of the Delta variant, which makes up more than half of all cases (above), is worrisome because it is more infectious and therefore will continue to spread in communities with low vaccination rates 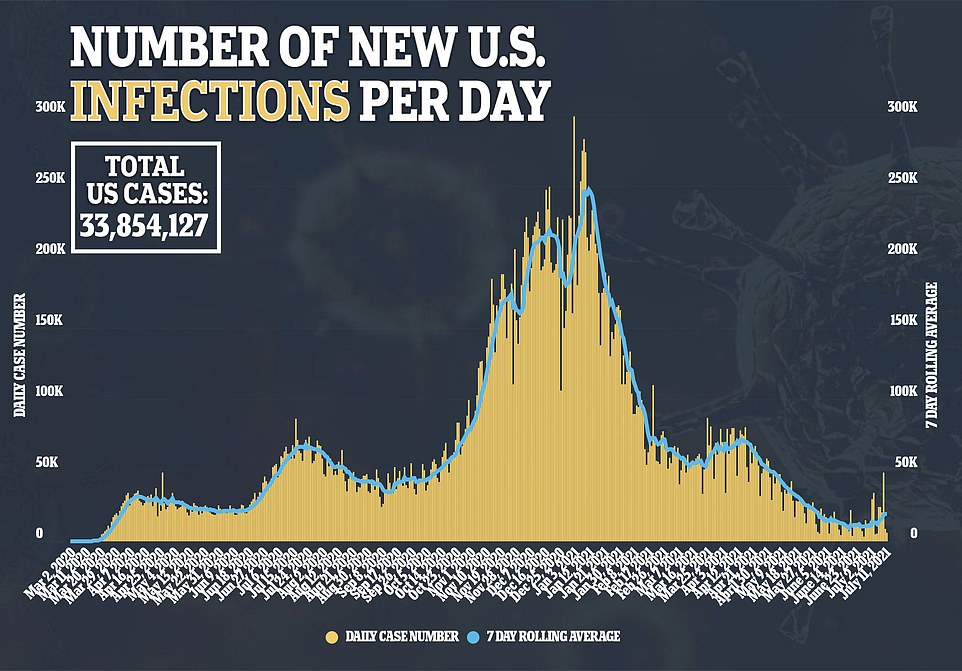 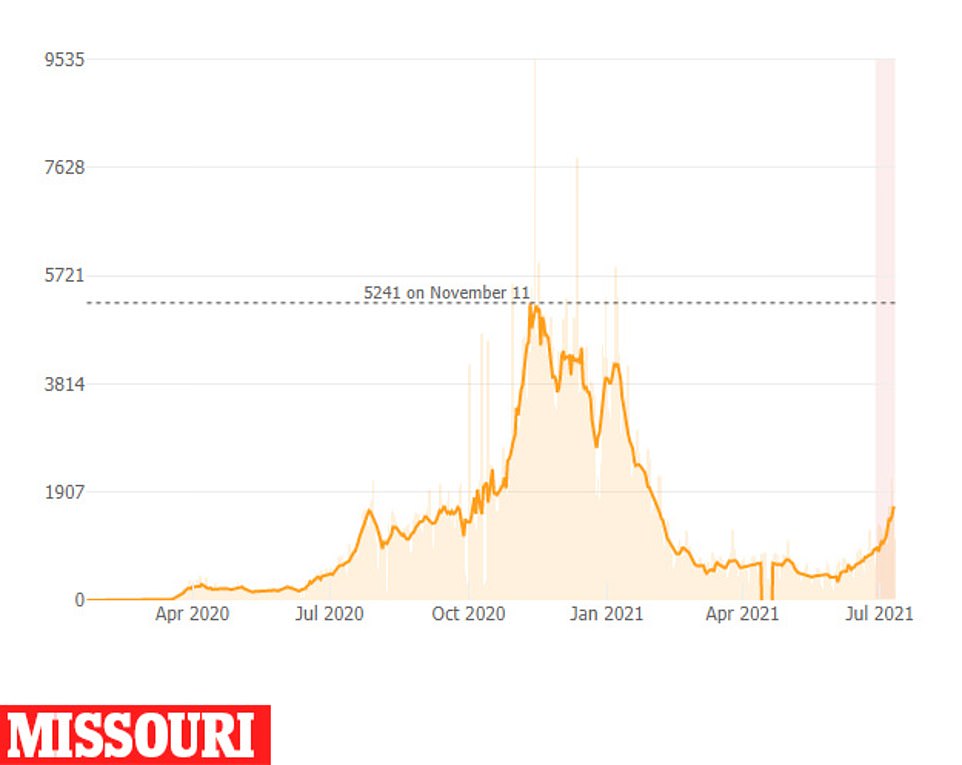 In Missouri, the current US epicenter, the seven-day average of cases has risen from 822 per day two weeks ago to 1,631, a jump of 98%

According to CDC data updated last week, the Delta variant, also known as B.1.617.2, makes up 51.7 percent of all new infections.

That’s up from the 26.1 percent of cases previously linked to the variant, meaning its prevalence has nearly doubled in two weeks.

The Delta variant has been detected in all 50 states and accounts for more than 80 percent of new infections in Midwestern states such as Iowa, Kansas and Missouri, where vaccination rates are lagging.

At least half states have been seeing COVID-19 cases increase as the variant spreads, a DailyMail.com analysis of Johns Hopkins data earlier last week found.

Missouri continues to be the country’s Delta epicenter with cases and hospitalizations continuing to soar.

New cases have risen from an average of 822 per day two weeks ago to 1,631 on Sunday, a jump of 98 percent, according to the analysis.

The Missouri Department of Health and Senior Services (MDHSS) reported on Sunday that the state is recording 142.1 cases per 100,000 residents, which is the highest in the country.

Additionally, the seven-day positivity rate sits at 12.3 percent, not as high as the record 23.1 percent recorded in November, but eight percentage points higher since the start of June,

Some of the biggest numbers of new cases per capita over the previous two weeks also came in states that border Missouri, such as Kansas.

The state reported its biggest surge in COVID-19 cases in more than three months as the Delta variant becomes a major public health concern.

Kansas health department data showed that the state had an average of 275 new COVID-19 cases a day for the seven days ending Friday, marking the highest seven-day average since March 26. 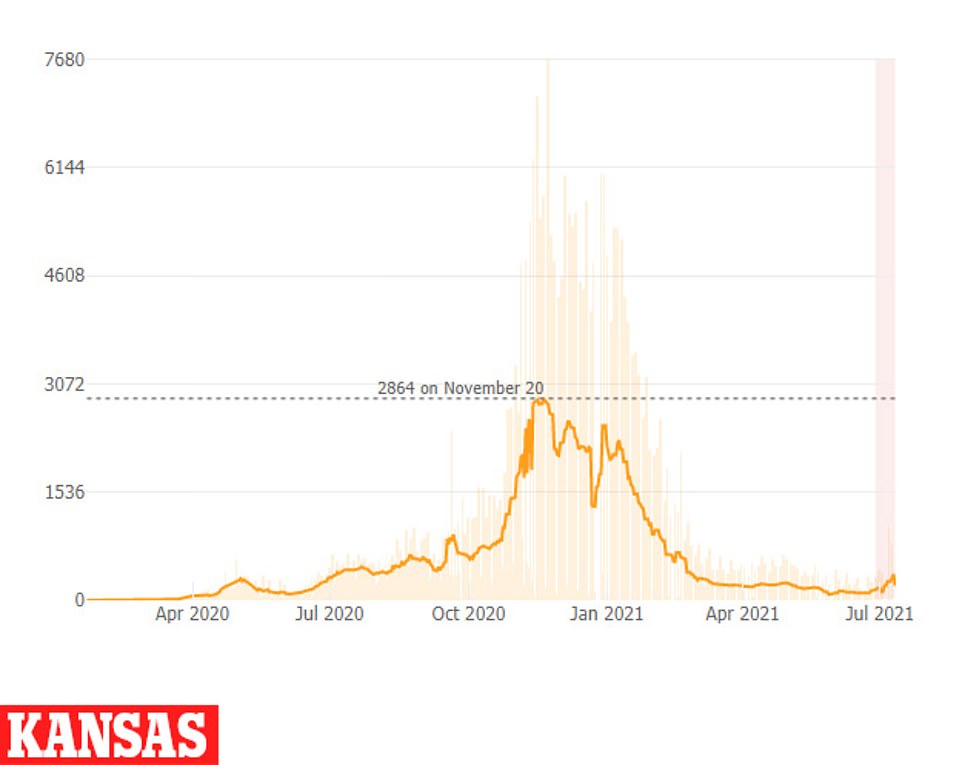 Kansas reported an average of 275 new COVID-19 cases a day for the seven days ending Friday, which is the highest seen since March 26 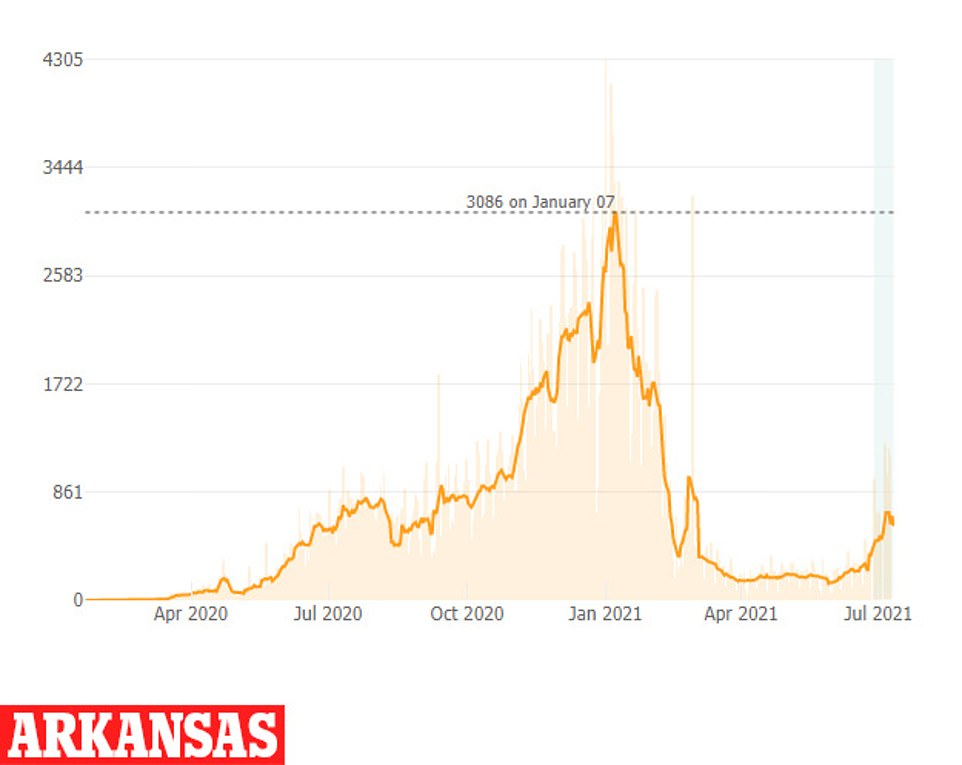 The number of new cases per day is still far below its peak in mid-to-late November, but it comes after local officials ended mask-wearing mandates and leaders of the Kansas Legislature ended a state of emergency for the pandemic.

Cherokee County has almost 20,000 residents, and the state reported 133 new confirmed or probable cases there during the past two weeks.

The top 20 counties for new cases per 1,000 residents included seven of the 10 counties bordering Missouri, according to an AP analysis.

Another four are in southeast Kansas – relatively close to the delta variant hotspot of southwest Missouri.

Meanwhile, just 42.6 percent of the state’s population are fully vaccinated, lagging behind the national average, according to CDC data.

‘We have offered assistance to local health departments and are sending added resources for testing and vaccination to the most affected areas,’ said Dr Lee Norman, the state health department’s top administrator.

‘We continue to advise that vaccination and mask wearing increase.’ 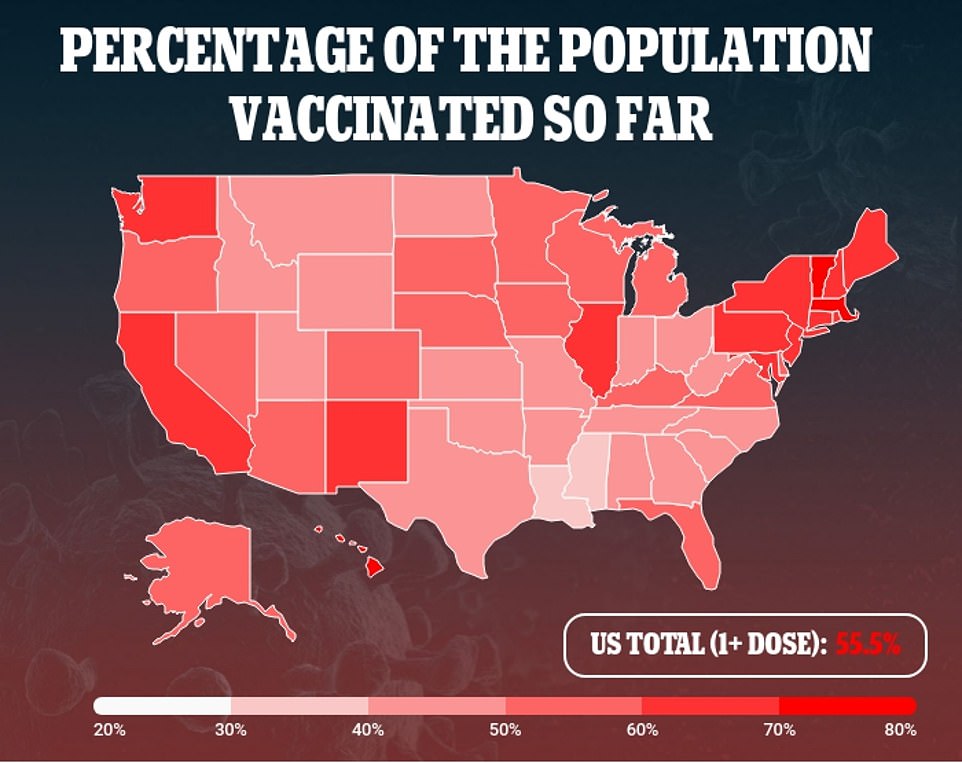 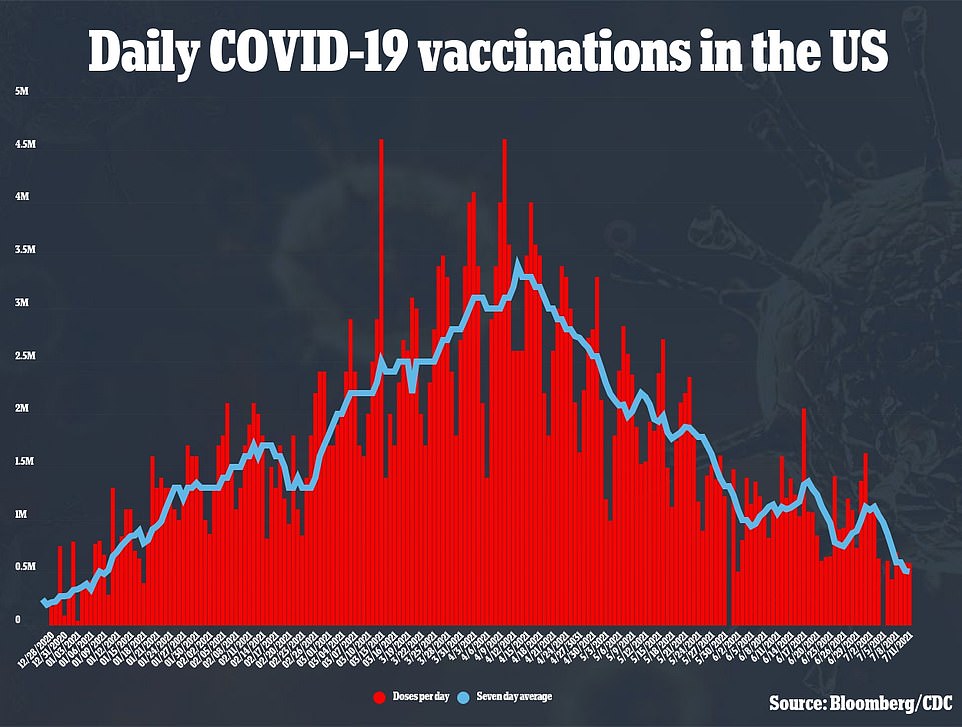 In nearby Arkansas, health officials reported more than 1,000 COVID-19 cases for the third straight day, greater than the 1,000 new infections reported Wednesday but less than the 1,200 reported on Thursday.

Data from Johns Hopkins show that new cases have risen 47 percent from an average of 402 reported per day to 591 per day.

The virus has been surging in Arkansas in recent weeks, fueled by the Delta variant and the state’s lagging vaccination rates.

Only 34.9 percent of residents are fully vaccinated, according to CDC data, with the state having the third-worst vaccination rate in the country behind Alabama and Mississippi, respectively.

‘We’re working very hard to go to that population through the employer, through trusted advisers, such as the clinics, making sure they have the information and overcoming the [vaccine] hesitancy or just the simply “we’re-putting-it-off” approach,’ Hutchinson told ABC’s This Week on Sunday. 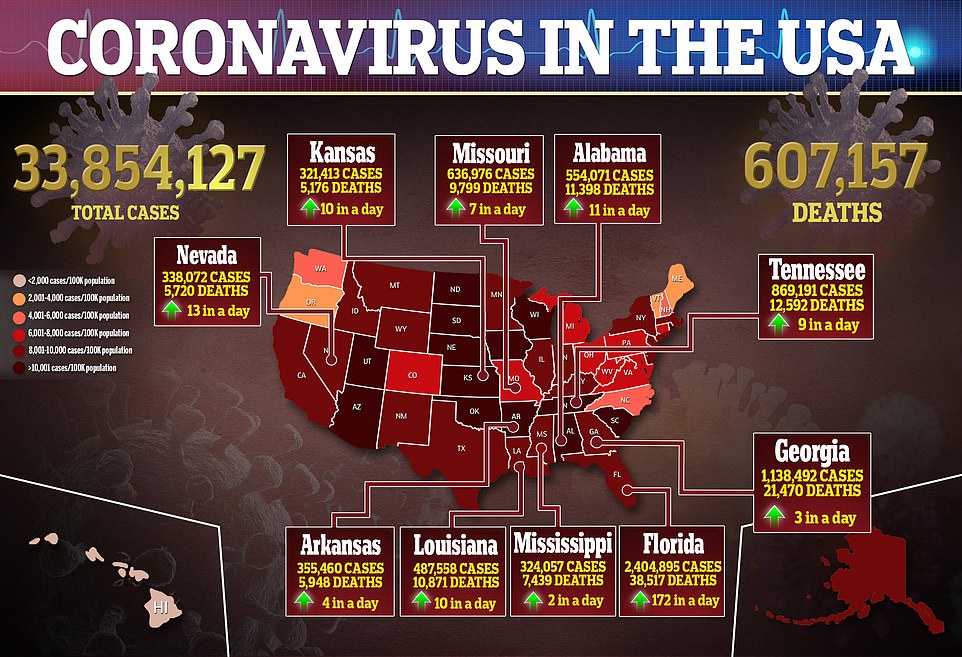