‘I wouldn’t park on your drive, don’t park on my land’: Fed-up land owner leaves polite notices on cars on his ground saying ‘if you cannot afford £1 then feel free to park elsewhere’

Parking problems on private land in Middlesbrough have forced its owner to leave polite notices on the windscreens of offending cars.

Up to 30 vehicles a day are being parked on the stretch of ground on Cargo Fleet Road owned by Keith Hussain who runs nearby business Sign Worx.

The land is privately owned and is not open for public parking, says Mr Hussain. 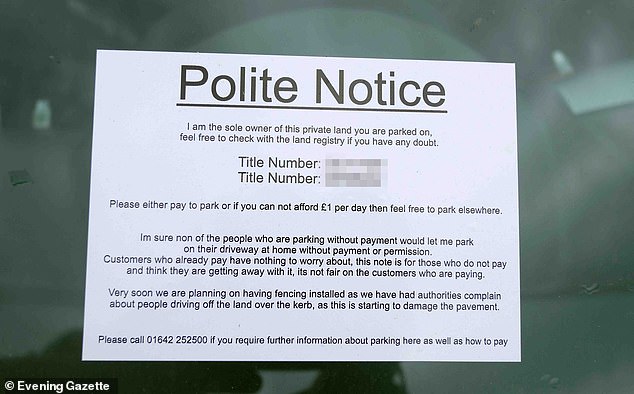 The landowner left a notice which said: ‘If you can not afford £1 per day then feel free to park elsewhere’

Some drivers pay to park there legitimately by prior arrangement but others park their cars for the day for free while heading in to the nearby town centre.

As a result, he says the pavement is being damaged where people drive off the land over the kerb.

He is now looking at installing fencing to try to alleviate the problem.

The notices were placed on the windscreens so he could remind drivers the land is privately owned – but the problem has persisted.

He said: ‘People are parking here during the day because they think it is ‘no man’s land.

‘I have even gone to the extreme of putting the land registry detail on the notices so they can see it is private land.

‘A few people have responded to it but the rest of them have not.’ 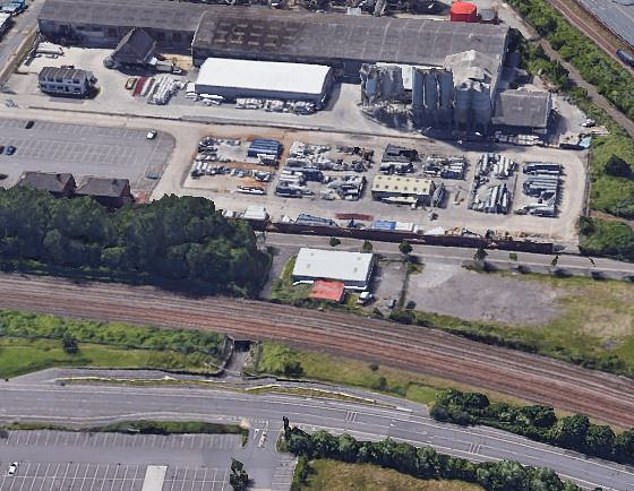 He also opens the stretch of ground to offer paid spaces to people looking for match day parking.

He said: ‘At the moment, we can’t even put the fences up because drivers are arriving at 6.30am or 7am and leaving their cars until 7pm.

‘People are just driving over the kerb and thinking it is OK to be on the land.’

A large parking notice is also displayed at the site warning people parking is prohibited unless authorised.

A few weeks ago, TeessideLive featured 18 pictures of problem parking around our area sent in by an irked reader.

Parking and traffic issues have also been the subject of hot debate in Stockton in recent weeks after problem locations were identified including rat runs, congestion and pedestrian safety.