In a sure sign of their closening relationship, Sarah Ferguson and Prince Andrew have appeared together today at the royal wedding of Lady Gabriella Windsor and Thomas Kingston.

The Duchess of York, 59, arrived at St George’s Chapel, Windsor this morning alongside her daughter Princess Beatrice and the 30-year-old’s new boyfriend Edoardo Mapelli Mozzi.

She was later seen standing next to her former husband Prince Andrew, as she talked to clergy before entering the chapel. It comes just months after the pair appeared ‘virtually inseparable’ during a family getaway to the Bahrain Grand Prix.

And comes amid reports of the Duke and Duchess’s ever-growing closeness, which saw her included in her first official Royal family photo in decades when their daughter Eugenie got married late last year.

The Duchess of York, 59, was seen standing next to her former husband Prince Andrew, as she talked to clergy before entering the chapel 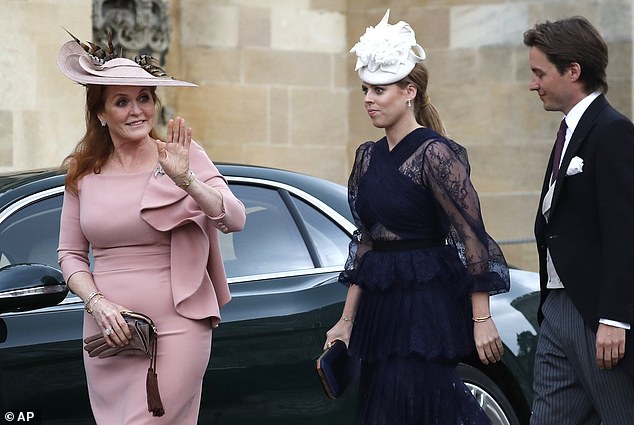 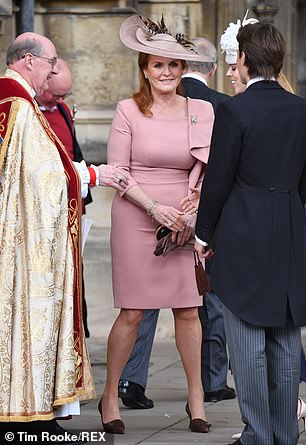 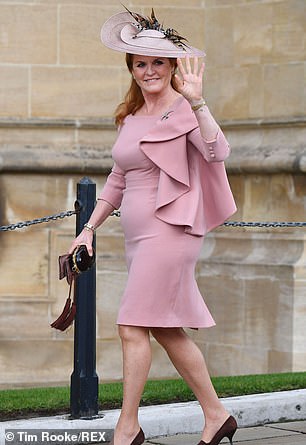 The Duchess of York was seen at the wedding alongside Princess Beatrice and her new boyfriend Edoardo Mapelli Mozzi. Edoardo seems to have earned the approval of Fergie spending an increasing amount of time with the family

The couple ‘amicably’ divorced in 1996 following ten years of marriage after the duchess was photographed having her feet kissed by her financial adviser, John Bryan, in the South of France.

But the pair have remained extremely close, sharing Andrew’s official residence, Royal Lodge at Windsor, and buying a luxury ski chalet in Verbier. But Fergie has denied there is anything more to their relationship than being friends.

In an interview with the Daily Mail earlier this year, Sarah said of her former husband: ‘We’re the happiest divorced couple in the world. We’re divorced to each other, not from each other.’

The pair was seen at the wedding alongside Princess Beatrice and her new boyfriend Edoardo Mapelli Mozzi. Edoardo seems to have earned the approval of Fergie spending an increasing amount of time with the family.

Rumours Princess Beatrice and Edoardo Mapelli Mozzi were dating first emerged late last year and they have since spent time together in New York and Kenya. 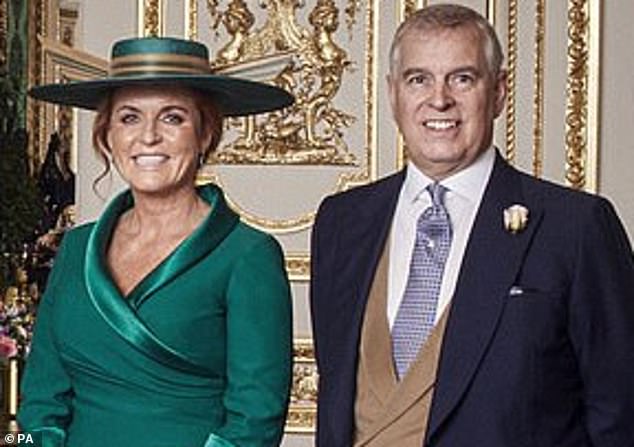 The Duke and Duchess of York, both 59, are pictured side by side in their daughter Eugenie’s official wedding photo in 2018 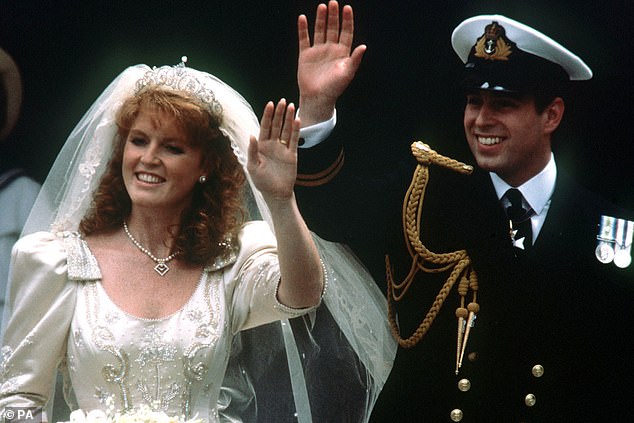 Sarah Ferguson waving to crowds after marrying Andrew as they leave Westminster Abbey, London after their wedding ceremony

All were present alongside a number of notable characters, at the wedding of Lady Gabriella Windsor and Thomas Kingston today.

The Queen led the royal family at the wedding and was joined by the Duke of Sussex, who left his baby son Archie at home to attend, and the Duke of Edinburgh, making a rare public appearance.

Pippa Middleton, sister of the Duchess of Cambridge and friend of the groom, was also among the guests at the ceremony. As was her brother and his girlfriend Alizee Thevenet, aged 30.

Other notable attendees included Princess Anne, the second child and only daughter of Queen Elizabeth II and Prince Philip, Duke of Edinburgh. She arrived alongside Prince Edward, Earl of Wessex.

Bride Lady Gabriella Windsor made her entrance in an elegant lace wedding gown by Italian designer Luisa Beccaria as she arrived at St George’s Chapel on her wedding day.

She entered the chapel at Windsor Castle to marry financier Thomas Kingston after stepping from a claret-coloured vintage car, accompanied by her father, Prince Michael of Kent. 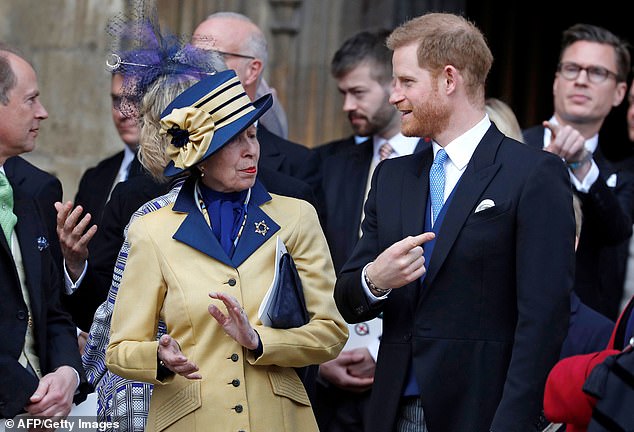 Other notable attendees included Princess Anne, the second child and only daughter of Queen Elizabeth II and Prince Philip, Duke of Edinburgh 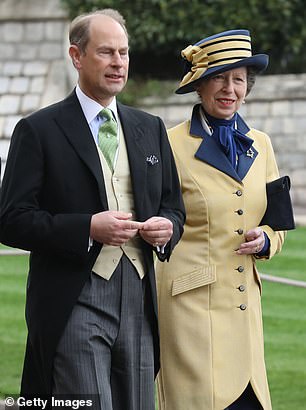 Princess Anne arrived at the wedding alongside Prince Edward, Earl of Wessex (pictured together). The pair strolled next to one another to the entrance of the chapel 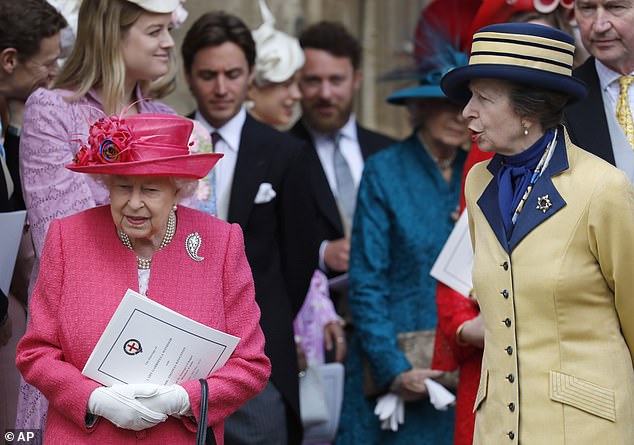 Princess Anne talks to her mother, the Queen following the wedding of Lady Gabriella Windsor and Thomas Kingston today

Known as Ella, the bride had a creamy ivory Ella rose in her bouquet alongside myrtle, a tradition in many royal bridal flower arrangements. The bridesmaids and pageboys wore outfits by the same designer.

Isabella and Maud Windsor – Lady Gabriella’s nieces – and the other bridesmaids wore cream dresses with blush underlays and sashes, with flower rings in their hair in a similar style to the bouquet.

Maud, the eldest daughter of Lord Frederick Windsor and Peep Show actress Sophie Winkleman, was part of the bridal party at Princess Eugenie and Jack Brooksbank’s wedding in October.

Pageboys wore cream shirts and knickerbockers for the midday ceremony conducted by Dean of Windsor the Right Rev David Conner.

Mr Kingston arrived at the chapel on foot with his best man, closely followed by the mother of the bride, in a lilac gown and embroidered overcoat, who was accompanied by Lady Gabriella’s brother.

It is the third royal wedding in the 15th-century venue in less than a year following the star-studded nuptials of the Duke and Duchess of Sussex last May and Princess Eugenie and Jack Brooksbank in October.