It was revealed last week that she is newly single after dating Jack Padgett for six months.

And Ferne McCann displayed her toned figure in a neon pink and orange bikini on Instagram while sunbathing at her home in Essex on Sunday.

Wow: Ferne McCann displayed her toned figure in a neon pink and orange bikini on Instagram while sunbathing at her home in Essex on Sunday

Ferne looked stunning in the snap which she shared with her 2.6 million Instagram followers.

She styled her blonde locks into a sweptback hairdo and her glam makeup enhanced her natural beauty.

In the caption she wrote: ‘This was just a chapter baby girl….keep reading.’ 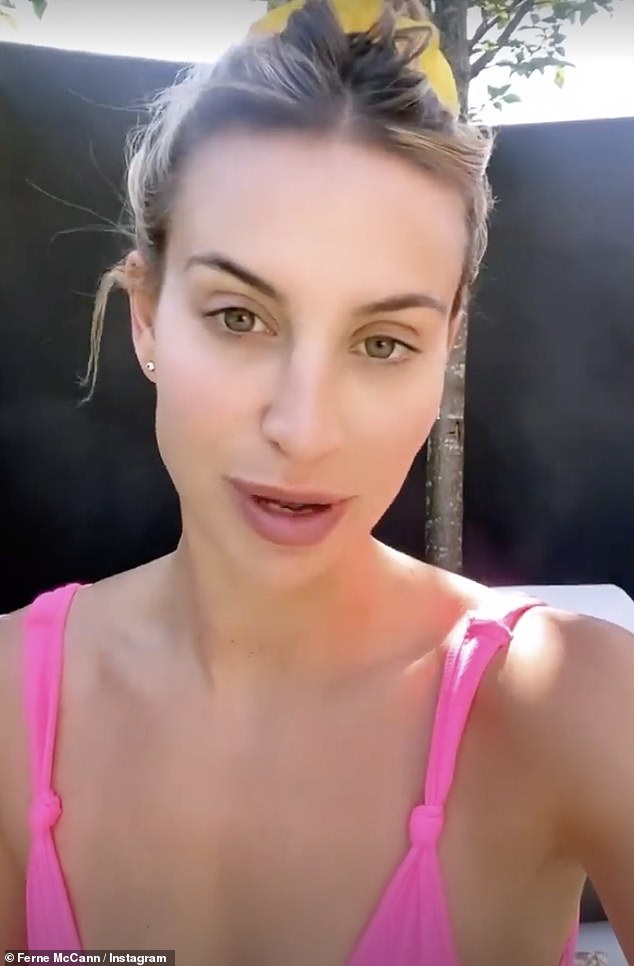 Sun: The reality star also took to her Instagram Stories to say how grateful she is for the beautiful sunshine after heading to a friend’s baby shower 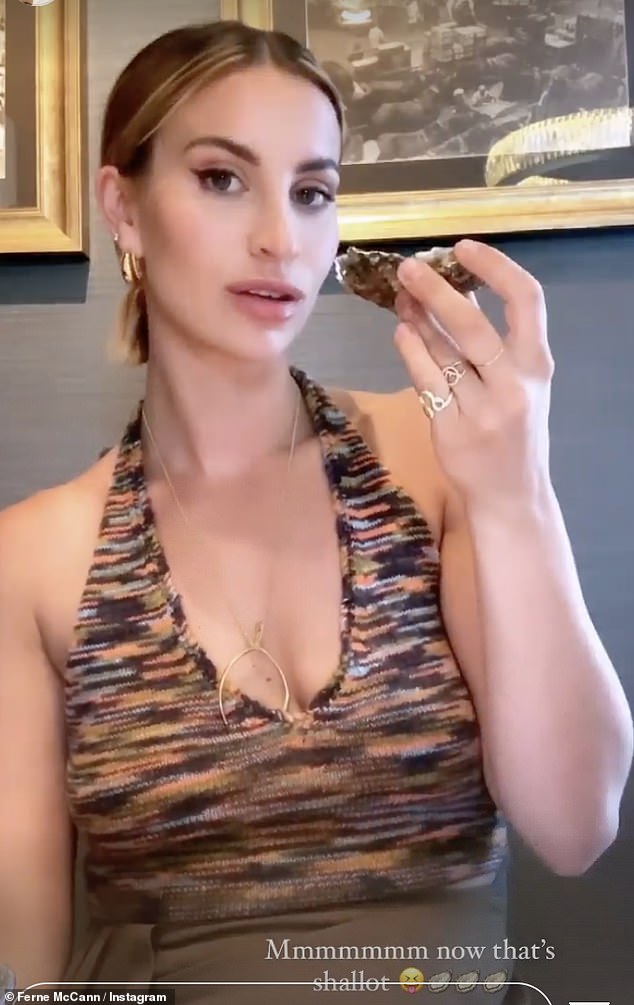 Delicious! After a quick outfit change Ferne headed to her friend’s celebration, where she tucked into a plate of oysters

The reality star also took to her Instagram stories to say how grateful she is for the nice weather.

After a quick outfit change the mum-of-one headed to a friends baby shower and enjoyed oysters and wine.

Billie and Sam Faiers also attended and the reality stars filmed themselves dancing and enjoying their evening.

Ferne wore a kaki mini skirt and a plunging brown and orange top, she pulled her hair back into a chic bun. 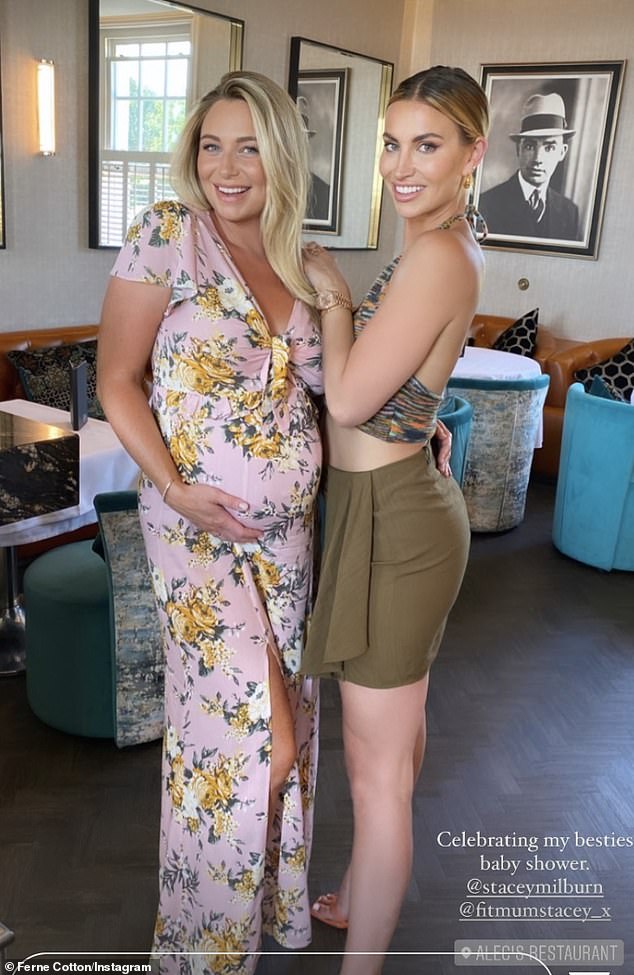 Gorgeous: Ferne wore a khaki mini skirt and a plunging brown and orange top as she posed for a beaming snap with her expectant friend 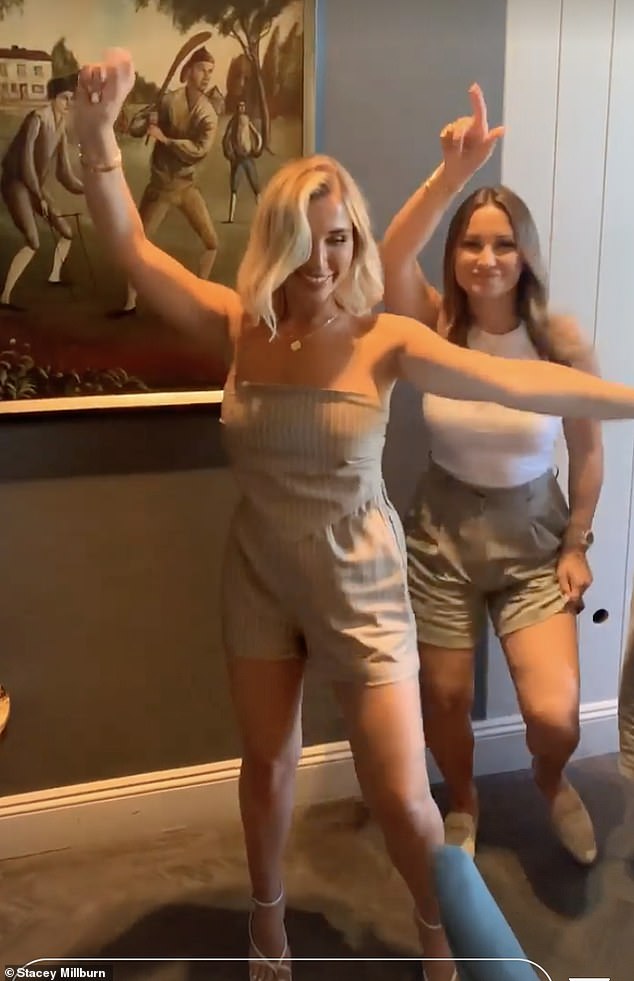 Work it! Billie and Sam Faiers were also in attendance and the reality stars filmed themselves dancing and enjoying their evening

Ferne’s night out comes after it was revealed last week that she had split from Jack with a source saying they’re ‘on different paths’ and that the end of lockdown made it ‘clear’ their lifestyles didn’t match up.

The reality star had previously called Jack ‘The One’ and they had moved in together during the pandemic.

A source close to Jack & Ferne confirmed the break up to MailOnline and said it was clear when lockdown started to lift their work and lifestyles were just too different.

They said: ‘Ferne’s an early bird up first thing for work and Jack’s events are all night time. They got on great but it’s hard to make things work when they were like passing ships.’ 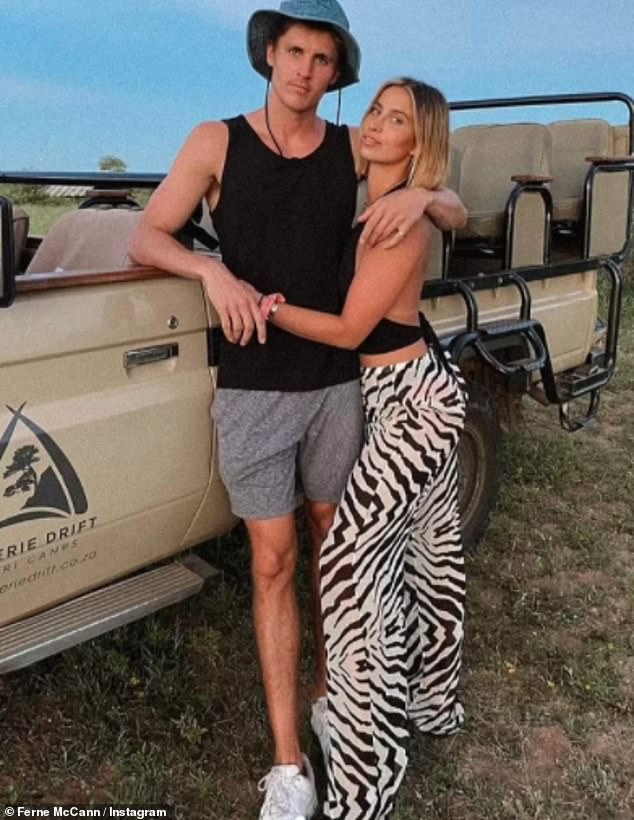 ‘Right guy, wrong time’: Ferne’s night out comes after it was revealed last week that she had split from boyfriend Jack Padgett (pictured during their Safari trip in December)

While a source also told The Sun: ‘Ferne said it was a case of ‘right guy wrong time’. It was clear to all of us that they were both on different paths.

‘She’s sad but she’s realistic about the situation… She has no regrets. They both got on great and had a lot of fun, but you need more than that in a relationship.’

Ferne last shared a loved-up snap with Jack to Instagram last month and the pair had moved in together during lockdown.

They had been spotted passionately kissing during a trip to South Africa and later made their romance official in January, telling MailOnline at the time that she was ‘really excited’ about the relationship.

While in March, the former TOWIE star revealed she cannot stop saying ‘I love you’ to the hunk.

Speaking to The Sun, she admitted that Jack has ‘changed her life’, saying: ‘I feel like he really is The One. I’m in that love bubble and I don’t think that’s going to change. He’s honestly changed my life and that’s it now. I’m so grateful.’

Ferne, who is mother to daughter Sunday went public with the model in late December after first meeting five years ago in Marbella. 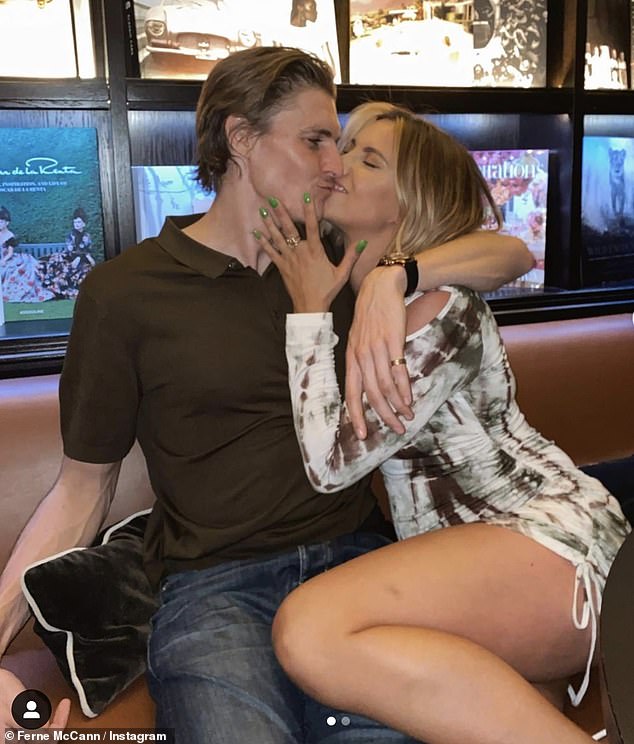 Called it quits: While a source also told The Sun : ‘Ferne said it was a case of ‘right guy wrong time’. It was clear to all of us that they were both on different paths.’ (pictured in happier times)

And she admitted moving in together so quickly has ‘fast-forwarded’ her romance with her ‘calm and kind’ beau.

Speaking in a recent interview with MailOnline, the mother-of-one explained while she initially found the prospect of letting a new man into her life ‘daunting’, she is confident she has found the ‘right person’ in longtime friend Jack.

She said: ‘It’s a really healthy honest relationship. It’s an adult relationship and I’m very happy. He’s nice, calm and balanced, and fun. I love him. I did actually say ‘I love you’ first.’

She added: ‘I knew he loved me but he wasn’t going to be the one to say it.’

While she shares Sunday with her incarcerated ex-boyfriend Arthur Collins, who is serving over 20 years in jail for an acid attack, babies are not on the cards yet.

She went on: ‘It’s too soon for all that, and I don’t want to scare him off – but I have discussed baby names with him. But we’re not planning for a baby yet. I just want to enjoy life with him first for a few more years to have fun with him.’

Ferne told MailOnline in October last year she had been using celebrity-dating app Raya to meet her next partner – after turning 30 months earlier and asking herself: ‘Am I going to be single forever?’

She said at the time: ‘Turning 30… I had that whole moment where I’m still single… as a female, when you’re single at 30 you really start to question yourself and you think “Am I ever going to find anyone?” This isn’t what I planned.’ 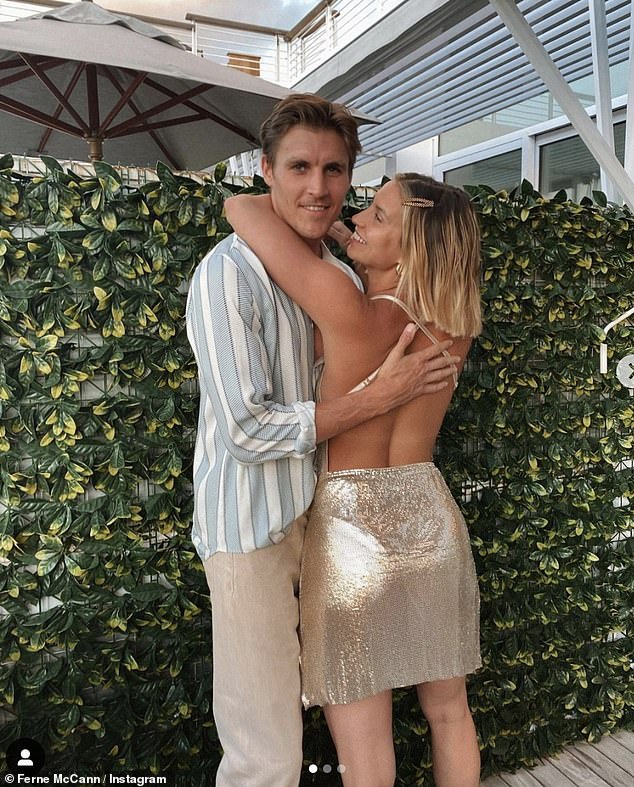 Old flames: Ferne and Jack first met five years ago in Marbella and moved in together during the UK lockdown (pictured together in a snap shared in February)