Jury selection in what is believed to be the first virtual jury trial in the US briefly ground to a halt on Monday when a prospective juror in Texas took a call in the middle of the proceedings and sauntered off the screen.

The mishap took place as lawyers in an insurance dispute in Collin County District Court were picking a jury to hear the case by Zoom videoconference.

More than two dozen potential jurors logged in by smartphone, laptop and tablet for jury selection, which was streamed live on YouTube, with Judge Emily Miskel occasionally providing tech advice on how to best use their devices. 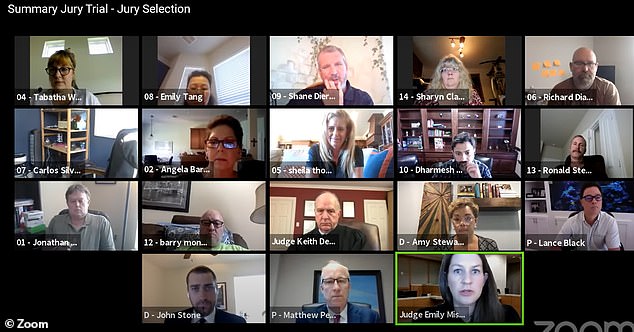 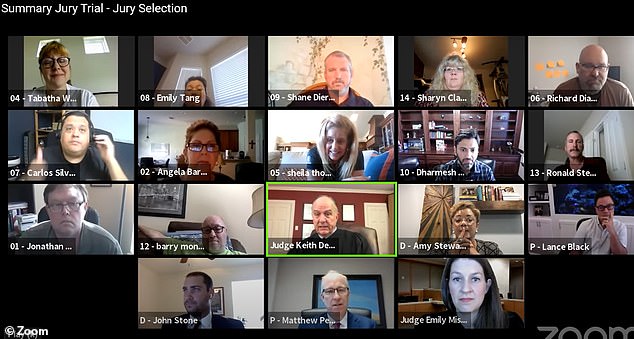 The juror finally came back after seven minutes, earning himself an admonishment from Judge Dean

Miskel created three ‘breakout rooms’ – two for jurors and one for the judge and lawyers representing both sides.

After conferring with the plaintiff and defense attorneys, Miskel returned to one of the virtual jury rooms, only to find that a juror had left.

Video showed him taking a call at his desk, then getting up and walking away from the screen, leaving the headphones he was using to communicate with the judge still plugged into his computer.

As minutes ticked by, Miskel and the judge presiding over the case repeatedly called for the missing juror to return, but he continued talking on the phone in the background, seemingly oblivious to the delay he was causing.

‘We have new challenges with remote service, but there are challenges when people come to the courthouse too,’ Miskel reassured the other jurors cooling their heels on Zoom.

Judge Keith Dean then chimed in, saying: ‘actually, this happens at the courthouse also. you gotta go find someone out in the hall talking on the phone.’

After more time passed with no sign from the juror, Judge Dean quipped: ‘usually at this point, I’m sending the bailiff to tap them on the shoulder.’

When the unaware juror finally returned after about seven minutes, the judge lightly admonished him for making everyone wait for him, although he prefaced his rebuke by reassuring him that he was ‘not yelling’ at him.

Despite his faux pas, the juror ended up being selected for the jury panel. 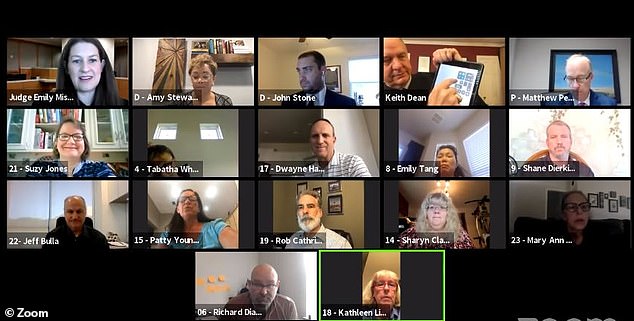 Groundbreaking: Official in Collin County District Court in Texas on Monday picked a jury to hear an insurance dispute case by videoconference 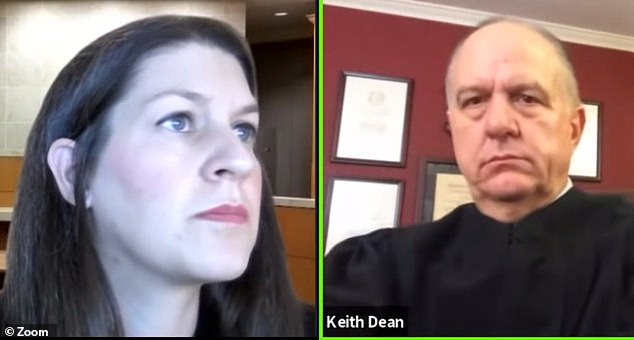 The presiding judge also noted that there will be times when jurors will be required to be alone in the room to maintain privacy.

The one-day trial is a so-called summary jury trial, in which jurors hear a condensed version of a case and deliver a non-binding verdict.

In the course of the proceedings, Judge Miskel asked the lawyers if they wanted her to separate the 26 would-be jurors into two groups to make it easier for them to see each one.

‘Yeah, your honor, I think it would be easier,’ said plaintiff’s lawyer Matthew Pearson. ‘it looks like when we’re looking at all of them it’s like the Brady Bunch on steroids, so splitting them in half may be the better thing to do.’

In the end, 12 jurors were selected for the panel and the other 14 were told they were ‘free to go about your day.’

The parties, having seen how their case could fare before a jury in a full-blown trial, will sit down for mediation and try to negotiate a settlement on Tuesday. 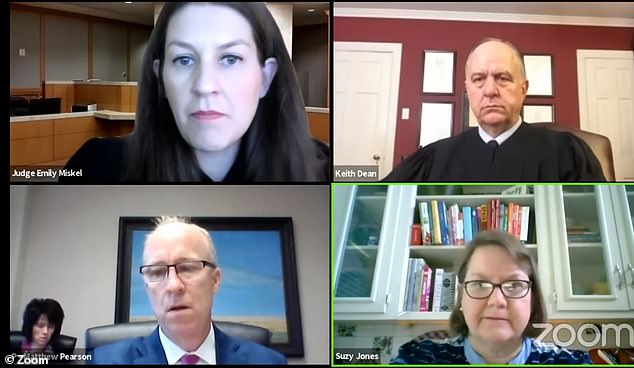 More than two dozen prospective jurors logged in by smartphone, laptop and tablet for jury selection, with Judge Dean reminding them they should act as if they’re in court 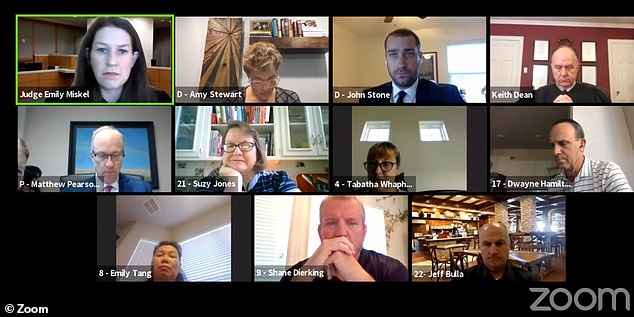 The one-day trial is a so-called summary jury trial, in which jurors hear a condensed version of a case and deliver a non-binding verdict

Officials say the abbreviated format and non-binding verdict make it ideal to test the viability of holding jury trials remotely, as they grapple with the more daunting challenge of how to conduct them safely in person during the pandemic.

‘You can’t drag people down to the courthouse and make them sit together for days at a time,’ Texas Supreme Court Chief Justice Nathan Hecht said in an interview. ‘It’s just too dangerous.’

Courts throughout the country have since March curtailed operations and limited in-person court hearings as states adopted stay-at-home orders and ordered businesses closed to slow the spread of the coronavirus.

In 39 states and the District of Columbia, court systems on a statewide basis directed or encouraged judges to conduct hearings remotely by phone or videoconference, according to the National Center for State Courts. But jury trials came to a halt. 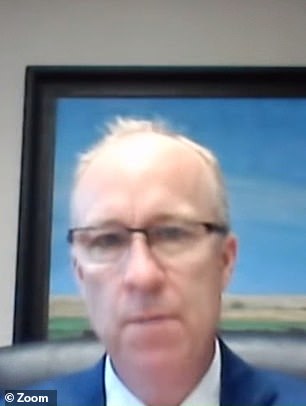 Plaintiff’s lawyer Micheal Pearson at one point asked for the jurors to be separated into two groups because seeing them all at once was like ‘Brady Bunch on steroids,’ he quipped

Monday’s case, a lawsuit accusing the insurer State Farm of failing to honor its obligations to cover property damage to a building caused by a 2017 hailstorm, was originally set to go to trial in McKinney, Texas, in March.

Even as courts in many states draw up plans to resume operations, judges and court officials have questioned how to safely conduct in-person trial proceedings.

Ideas include spreading jurors out in a courtroom and requiring them and lawyers to wear masks. Even with these precautions, it is not clear how hundreds of people can be asked to show up for jury duty in cramped courthouses.

‘It’s just imponderable,’ Hecht said. “There are hundreds of people over the country studying how do we get back to jury trials.’

The Indiana Supreme Court said last week that once jury trials resume in the state, parties in civil cases can agree to conduct them remotely. And in Arizona, the state’s top court has said it will allow jurors to be selected remotely.

The moves come as courts face a growing backlog of cases. In 2019, Texas held an average of 186 jury trials per week, said David Slayton, the Texas Office of Court Administration’s administrative director.

Whether virtual trials will be successful remains to be seen.

Judge Miskel, whose courthouse is overseeing Monday’s trial, said the case could illuminate whether a ‘hybrid approach’ is possible, in which jury selection is virtual and the remainder of the trial is conducted in person.

Slayton acknowledged that holding trials remotely presents challenges, including making sure jurors remain attentive and do not conduct research online. But those issues also exist with in-person trials and can be easily dealt with by a warning from the judge, he said.

‘Obviously it’s on video, so the judge can tell if jurors are washing dishes or doing something else,’ Slayton said.