Mortgage rates for buyers with 5 and 10 per cent deposits are dropping at the highest rate of any home loan type, as first-time buyers flock back to the market post-stamp duty holiday.

Typical two-year fixed rates on 10 per cent deposit mortgages, which are commonly used by first-time buyers, dropped by 0.29 percentage points to 2.56 per cent in the last month alone.

Meanwhile, two-year fixes on 5 per cent products saw an average reduction of 0.25 percentage points to 3.32 per cent in the same period, according to the latest figures from financial information service Moneyfacts.

The monthly drop was bigger than that seen on 40 per cent deposit mortgages, where rates have dropped dramatically in recent months and are currently plumbing depths of less than 0.8 per cent in some cases.

These falls bring the rates on low-deposit mortgages very close to pre-pandemic levels.

The very lowest rates available are even cheaper, at 1.79 per cent and 2.67 per cent – though these come with hefty arrangement fees which could make them more expensive overall.

‘We keep expecting things to slow down with the continual reduction of rates, and so far that hasn’t happened, we’ve just seen rates continue to fall.’

However, those seeking to get on the property ladder may have limited time to act on these attractive deals.

Mortgage rates are likely to go up if the Bank of England’s base rate increases – an event that is now tipped to happen as early as the end of this year.

‘With inflation increasing, we could see interest rates starting to rise – particularly if the Bank of England base rate goes up,’ says Katie Brain, banking expert at financial information service Defaqto.

She added that cost of living increases could also make it more challenging for first-time buyers to pass lenders’ affordability checks.

These are the calculations that lenders carry out based on potential home buyers’ salaries and outgoings.

‘First time buyers’ affordability could also be squeezed if the cost of living goes up,’ Brain added.

The current falls in rates represent a significant improvement in the mortgage market prospects for first-time buyers, who saw 5 and 10 per cent deposit products pulled from the market during the first national lockdown in 2020.

When they did gradually return, rates had been pushed up much higher than before to reflect lenders’ new caution.

‘While the average fixed rate on high loan-to-value mortgages saw the most dramatic cuts last month, when you look at the best buys in these tiers, there is not that much difference between what is on offer now compared to pre-Covid, says Mark Harris, chief executive of mortgage broker SPF Private Clients.

‘It goes to show just how high rates shot up during the pandemic for those with small deposits as lenders viewed these borrowers as being higher risk.’

As of this month, the average two-year fixed rate on a 5 per cent deposit mortgage has come down by almost 1.5 percentage points in a year, from 4.74 per cent in October 2020 to 3.32 per cent today, according to Moneyfacts.

The typical 10 per cent two-year fixed rate is now nearly 1 percentage point lower, having come down from 3.64 per cent to 2.56 per cent – though product availability was strictly limited a year ago as lenders recovered from lockdown.

However, instead of looking for the lowest possible rate, buyers should also consider the impact of any arrangement fees.

By adding up any fees along with their monthly payments, they can work out the total annual cost of their mortgage. They may find it is cheaper to take a higher rate with a lower, or no, fee – as shown in the example below.

You can do this for your own house purchase using the This is Money mortgage calculator.

First-time buyers flooding back to market

A combination of lower rates, lockdown savings and a calmer market is attracting first-time buyers to the property market in increasing numbers.

According to Experian, daily mortgage applications among borrowers in their 30s were up 14 per cent in September 2021 compared to the previous month, while applications from those in their 20s increased 9 per cent.

Average daily mortgage applications up 20 per cent for those in their 30s when comparing September 2021 with September 2020.

The stamp duty holiday which was in place from July 2020 until the end of September 2021 saw home movers rush to complete purchases, driving up house prices by up to 10 per cent or £25,000 in the process. 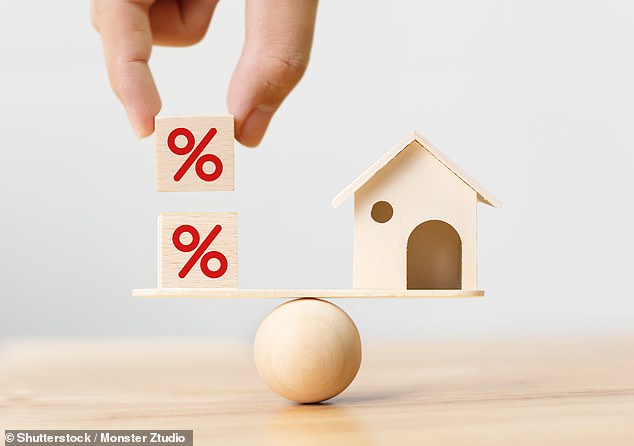 Mortgage rates for borrowers with 10% deposits are now as low as 1.67 per cent

But this had less of an impact on first-time buyers, as they do not pay the tax on purchases under £300,000.

Now, some of them armed with savings they built up in lockdown, they are returning to the housing market.

‘Many have been using their lockdown savings to help secure their perfect home, with over a third of people in their 20s (36 per cent) saying in our survey that the pandemic had helped them save for a deposit, rising to 41 per cent of those in their 30s.’

Should first-time buyers fix for five years in face of base rate rise?

While the rates are higher than two-year fixes, taking a five-year fix could allow a buyer to lock in a favourable rate now, and shield them against a potential rise in the Bank of England’s base rate – which would cause mortgage interest rates to rise – for longer.

An increase in the base rate, currently at 0.1 per cent, is being predicted as early as December.

While it is likely to only rise by a small margin at that point, it could well rise further in the next five years, and is unlikely to be as low as 0.1 per cent again for some time.

‘The general consensus seems to be that the Bank of England is likely to incrementally increase the base rate to measure its impact on demand in the economy,’ says Gerard Boon, mortgage broker at Boon Brokers.

‘If this is true, we are likely to see incremental increases in mortgage interest rates over upcoming years but hopefully no sharp increases.’

However, a buyer taking a five-year fix must consider whether they might want to move home within those five years, as not all mortgages can be transferred or ‘ported’ to a different property and there will be fees for exiting the deal early.

Defaqto’s Katie Brain added: ‘It could be a good time to look at a 5 year fixed rate, as the difference between a two-year fix and a five-year fix is only around 0.1 per cent on a 5 per cent deposit mortgage in some cases – though there is more of a gap for 10 per cent deposit products.

‘However, it does depend on the individual’s circumstances as early repayment charges will typically apply for the five-year period.’