The dolphins being stolen to ORDER: Horrific footage shows fishermen in Japan’s ‘killing cove’ hauling bleeding animals from sea to sell for £190,000 to tourist resorts or for their MEAT

This is the horrifying moment dolphins are mercilessly snatched from the wild in Japan to entertain tourists.

Heartbreaking footage filmed in Taiji, known as the ‘killing cove’, shows fishermen hauling a net with dolphins onto a boat as the mammals fight to escape.

A second clip shows divers wrestling with a dolphin in the cove while it smashes its tail against the water in distress.

Fishermen in Taiji cove, Japan, haul a net full of dolphins onto the boat as divers assist below 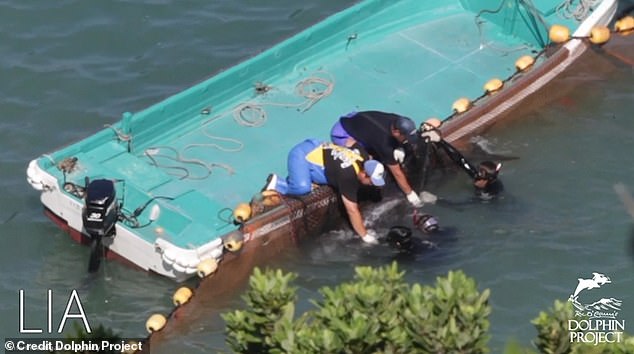 The video, filmed by Dolphin Project campaigners, also shows the sea stained with blood as the mammal is battered against the razor-sharp rocks.

Travel giant TUI are believed to be the only British travel giant to offer a ‘dolphin experience’ holiday package. 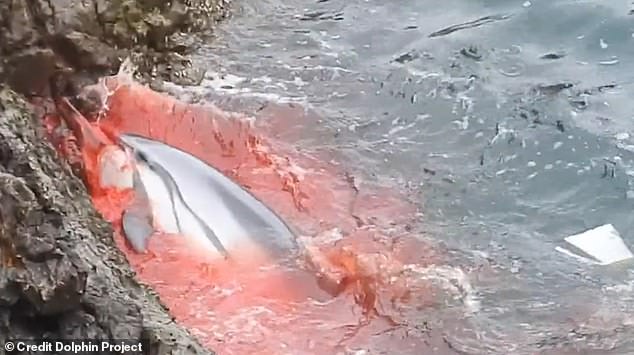 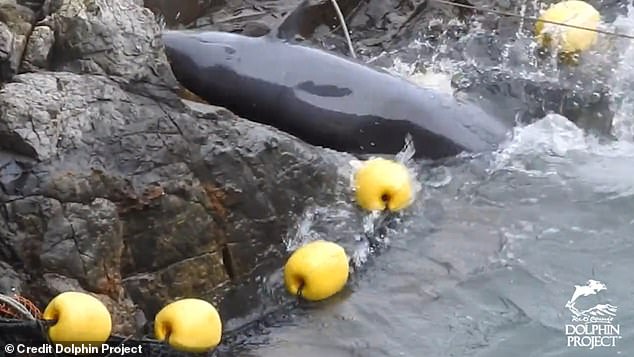 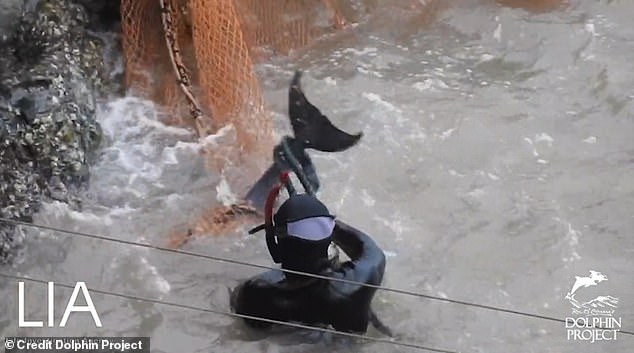 A diver wrestles with a dolphin as it tries to escape a net. If a dolphin is ‘lucky’ it is sold by fishermen to ‘brokers’ and can fetch up to £190,000 once it is trained

The campaigners are calling on the company to follow the likes of AirBnB, Virgin Holidays and STA Travel in axing links with resorts which keep dolphins for entertainment.

TUI plugs the £130-a-night Atlantis Sanya resort in China which features a water park for guests to ‘meet and interact’ with dolphins while photographers capture the ‘unforgettable moment’.

However TUI has pledged that it only endorses venues that are in line with global welfare standards. 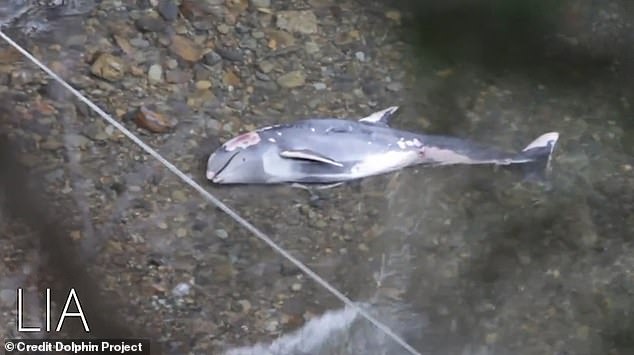 Dolphins are driven to the shore by hunters lowering steel poles into the water and hitting them with hammers. Pictured: A dolphin washed up onto the shore

It is estimated 2,000 mammals will be caught in the cove this season with many immediately slaughtered and sold for meat.

However if a dolphin is ‘lucky’ it is sold by fishermen to ‘brokers’ and can fetch up to £190,000 once it is trained.

Campaign manager of The Dolphin Project, Tim Burns, said holidaymakers have an image that the dolphins are ‘gently picked’ from the coast.

‘Tourists are largely unaware how many creatures have died so they can swim with that one ­dolphin they meet,’ Mr Burns told the Daily Mirror. 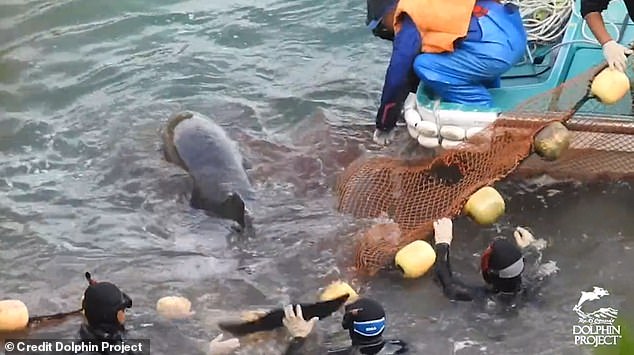 He added that the campaign group estimates that for every 1,000 sea mammals captured, around 200 go into captivity with the rest sold for meat.

Dolphins are driven to the shore by hunters lowering steel poles into the water and hitting them with hammers.

This causes the mammals to swim to sore to escape the noise where they are trapped by nets.

However the dolphins that are not wanted for training are killed with a metal spike through their neck.

The trade is legal in Japan under their fishing laws and has been going since 1960.

TUI also promotes Dolphin Discovery, which offers swim with dolphin programmes in central America and the US as well as SeaWorld.

However both companies deny buying dolphins from Taiji hunts.

A TUI spokesman said: ‘We are committed to working only with ­venues that agree to uphold the Global Welfare Guidance for Animals in Tourism as ­formulated by the Association of British Travel Agents.

TUI added how they are in discussions with the venues to further improve animal welfare and tackle issues.

Group owner of Dolphin Discovery said the company would never participate in the Taii event.