A Carnival Cruise Line ship has failed a sanitation inspection after receiving its worst-ever score.

Inspectors found that Carnival Fantasy had brown water discharging from a pipe in the medical centre and bagels and sliced bread at a salad bar ‘with not less than 15 flies on them’.

Carnival Cruise Line’s Carnival Fantasy ship. It failed its latest sanitation inspection, which was carried out by the U.S. government’s Centers for Disease Control

Twice a year the U.S. government’s Centers for Disease Control (CDC) carries out unannounced hygiene reviews on ships that enter American ports as part of its vessel sanitation program.

The Carnival Fantasy inspection was carried out as part of this program.

When inspectors visited Alabama-based Carnival Fantasy in July, they found a string of sanitation violations in addition to the issues in the medical centre and salad bar.

The CDC report says that when one crew member on the ship came down with symptoms of acute gastroenteritis in late June, follow-up interviews to check the worker’s close contacts for symptoms ‘were not conducted in accordance with correct procedure’.

The report also states that the ship did not have an up-to-date ‘fecal and vomit accident response procedure’ in a plan presented to the inspector.

Other violations included containers of herbs in a kitchen labelled incorrectly, knives stored in warm, soiled water at a lunchtime dessert station and sneeze guards not fitted to several self-service food stations. 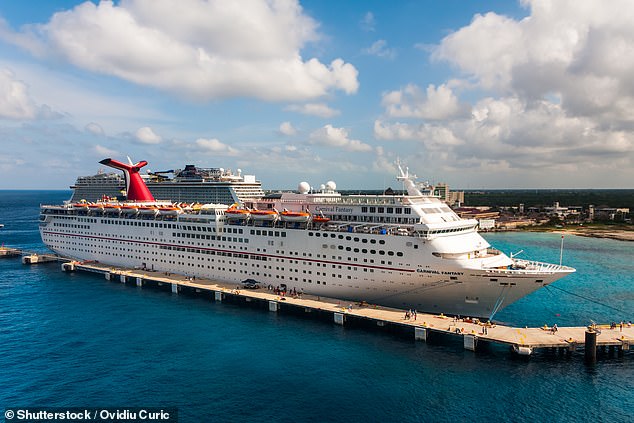 Carnival Fantasy received just 77 marks out of 100 during its sanitation review – its lowest score before that was 78 in 1990. Ships must score 86 or above to pass

Royal Caribbean’s Majesty of the Seas scored 82 and was criticised after inspectors found leaking water from a coffee machine and incorrectly labelled food, among other violations.

A spokesperson for Carnival Cruise Line said: ‘The results for Fantasy are not reflective of our robust standards and dedicated commitment to our guests’ health and safety.

‘We have already taken corrective action, added additional staff and asked United States Public Health Service (USPH) for a re-inspection as soon as possible, with every expectation that we will exceed USPH standards.’

A Royal Caribbean spokesperson said: ‘We are in support of the Vessel Sanitation Program.

‘Our shipboard teams are focused on providing high health standards for our guests and are always aiming for a score of 100 per cent.’