New airport statistics have revealed the boom in air travel in the UK today after hundreds of commercial flights took to the skies as jetsetters set off on their ‘amber holidays’.

Live tracking data recorded more than 120 flights today from the UK to Greece, Italy, Spain and France – four of the country’s most popular amber holiday destinations.

Flight Radar data from Heathrow, Gatwick, Birmingham and Manchester airports showed most tourists were flying to Spain, with 50 flights today alone, followed by 32 to Greece, 29 to France and 10 heading to Italy.

But the number of commercial flights taking off today, 76,000, remains considerably higher than figures from last year, when the number of planes in the skies dipped below 30,000.

Globally, flights were down just 10 per cent in March 2021 compared to same month figures from two years ago, according to Flight Radar.

But Environment Secretary George Eustice caused further confusion over foreign holidays today after saying Britons could go to an ‘amber list’ country to see their friends and relatives – in direct contrast to the advice of the Prime Minister. 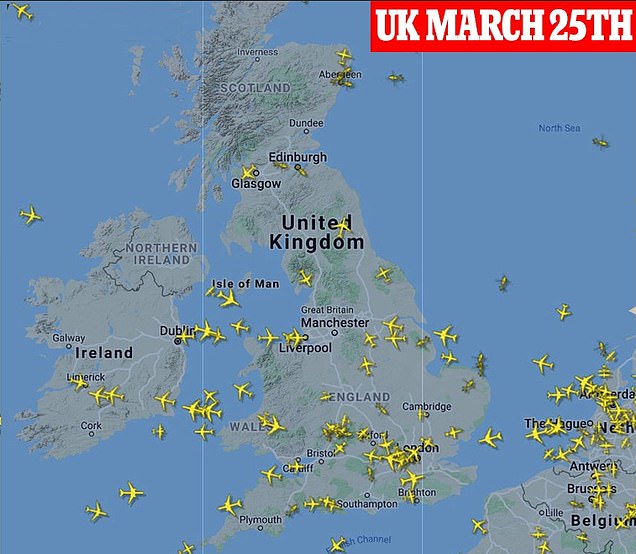 The cheapest return from London to a European destination is shown.

The prices were checked on Skyscanner for flying out in ten days’ time and returning a week later.

At London Heathrow Airport, there were 65 flights to the four most popular ‘amber’ holiday destinations.

In the Midlands, 21 flights took off from Birmingham Airport to the European hospots, while at London Gatwick, there were 19 respectively.

Finally, at Manchester Airport, there were 16 flights in total today.

Most tourists were heading to Spain with 50 flights, and the second most popular destination was Greece, with 32 trips from the UK today.

These were followed by France, 29, and Italy, 10 as Brits raced to enjoy some of the last Spring sunshine in European hot spots.

Tracking data from Flight Radar show the levels of air travel are remaining slightly lower than pre-pandemic levels, with 2021 seeing around 35,000 fewer commercial flights than in 2019.

Promisingly for the airlines and jetsetters, these statistics are significantly higher than 2020 – where just 36,000 commercial journeys took place according to the real time flight tracker map.

The new figures come as the cost of flights to amber list countries have plummeted since the Government’s announcement of which countries would be designated green, amber and red.

Airlines are hoping for a further surge of UK tourists if ‘amber’ countries are upgraded to the green list when it is first reviewed on June 7 and then on June 28.

And return flights for a four-day trip to Madrid from London will cost just £18 next month, while Rome is £22 and Athens is £26 – all with Ryanair from London Stansted.

These prices are significantly down on what is available this week – with returns to Rome at £204, Madrid at £155 and Athens at £238, according to Google Flights.

The prices for Paris are yet not dropping to such low levels, with most returns in June around the £90 mark – and only three days below £70, with the cheapest at £56.

Passengers returning from amber list countries must stay at home for ten days and take a PCR test on days two and eight – as well as a lateral flow test before the return flight.

They can also pay for ‘Test to Release’ on day five to end self-isolation early.

Boris Johnson today brutally slapped down one of his senior ministers after he insisted Britons can go to an ‘amber list’ country to see their friends and relatives.

The PM stressed that the medium-risk category in the government’s traffic light system was not for ‘holidays’ after George Eustice sparked more confusion about the rules.

Passengers have been heading to amber list countries since the travel ban was eased and swingeing fines for non-essential travel were axed.

There were 120 flights to such destinations from Heathrow yesterday – compared with just 19 to green, quarantine-free countries.

At London Gatwick it was 31 and six respectively, despite Downing Street saying people should not be travelling to any places on the amber list unless it is essential.

Meanwhile, the cost of flights to Spain, France, Italy and Greece have fallen to as little as £18 return. 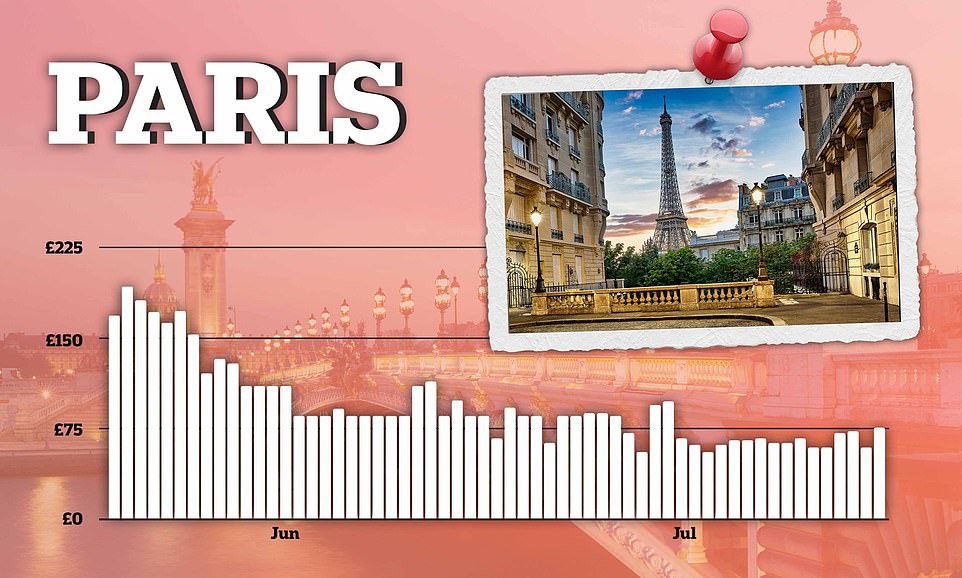 PARIS: Flights from London to the French capital will not fall below £87 mark until mid-June 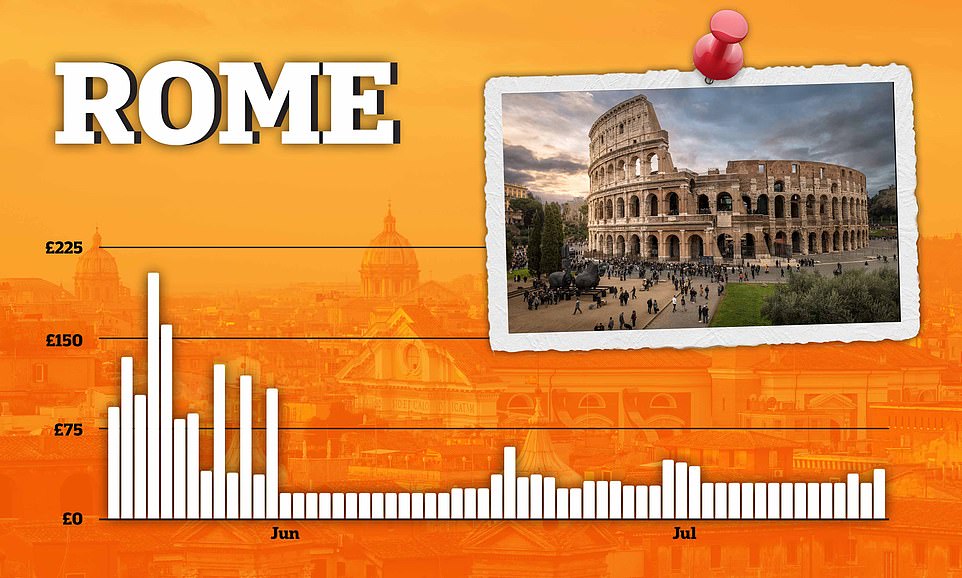 ROME: Return flights for a four-day trip to Rome from London will cost just £22 next month 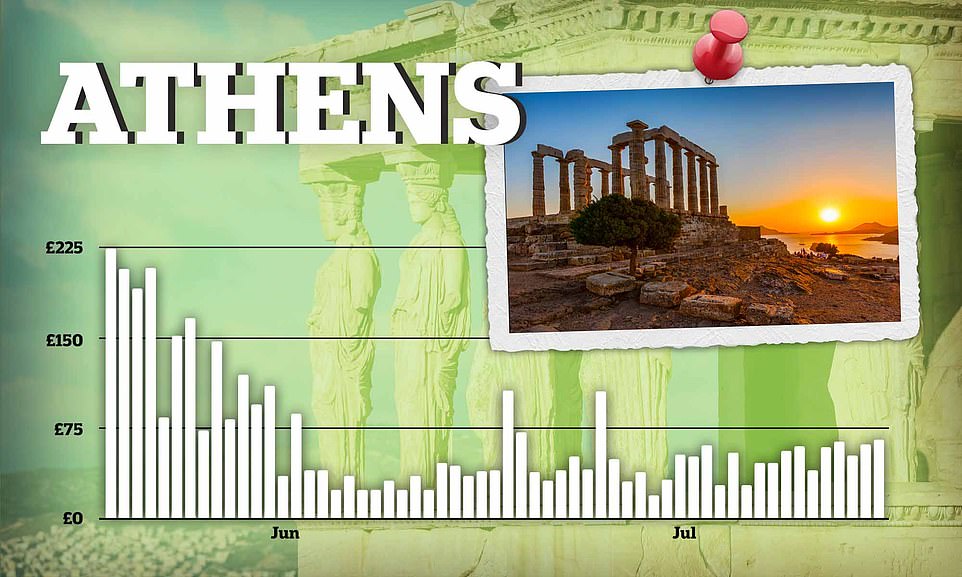 ATHENS: Those hoping to visit Greece can get a bargain if they travel on selected dates in June 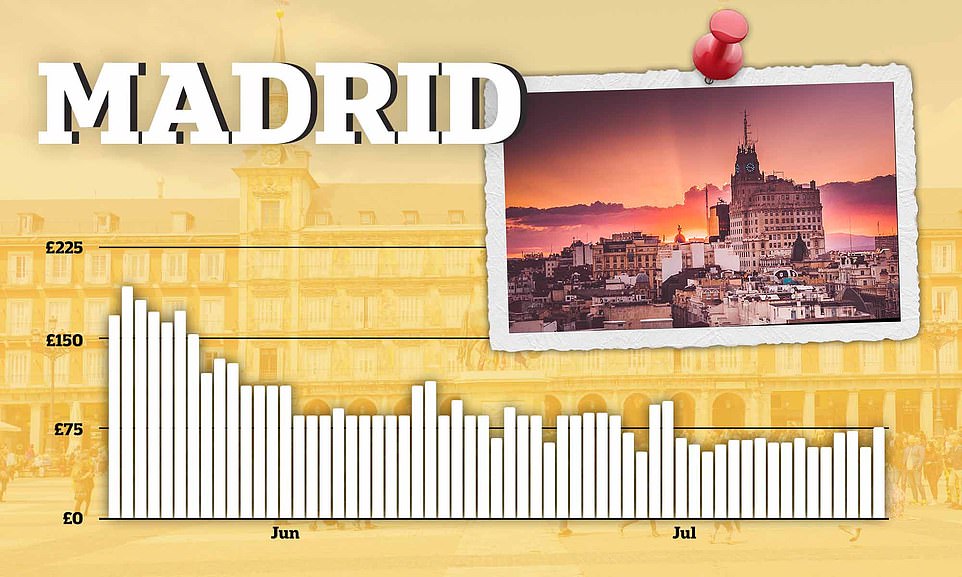 MADRID: A return to the Spanish city will be just £18 next month and only rises slightly in July

But Environment Secretary Mr Eustice told BBC Radio 4’s Today programme this morning: ‘The reason we have the amber list is there will be reasons why people feel they need to travel – either to visit family or indeed to visit friends.

However, on a visit to a vaccination centre in London later the PM moved to stamp out that idea that visiting friends is a good enough reason.

Mr Johnson said of the ‘amber’ list: ‘It is not somewhere you should be going on holiday, let me be very clear about that.’

He said: ‘If people do go to an amber list country – if they absolutely have to for some pressing family or urgent business reason – if they have to go to an amber list country, then please bear in mind that you will have to self isolate, you will have to take tests and do a passenger locator form and all the rest of it but you’ll also have to self isolate for 10 days when you get back and that period of self-isolation, that period of quarantine, will be enforced with fines of up to £10,000.

‘So I think it’s important for people to understand what an amber list country is.’

It comes as a change to the NHS app has allowed people to prove whether they have had the Covid jab – effectively making it a vaccine passport. 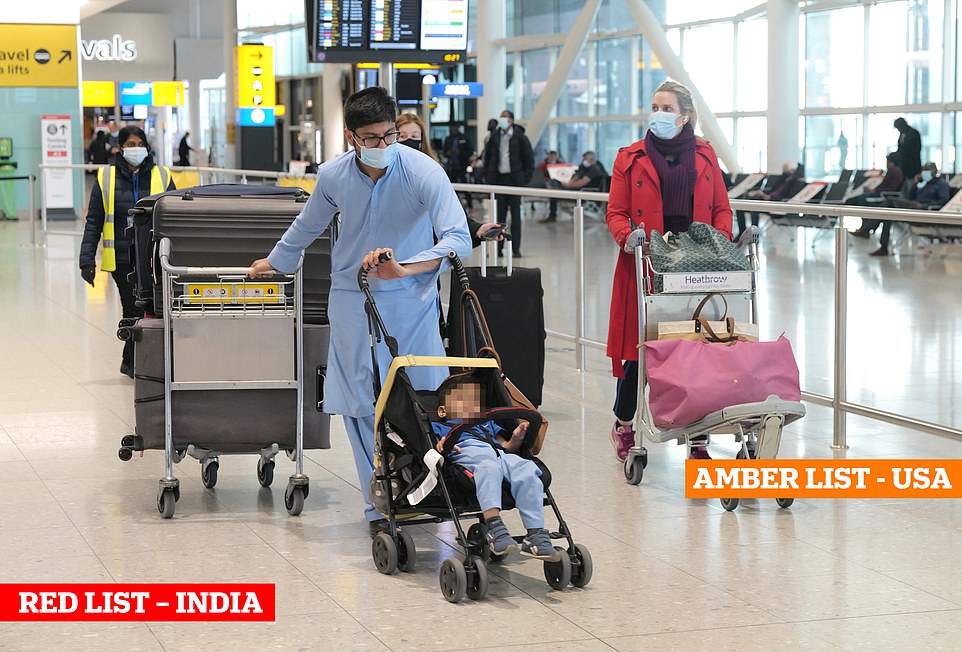 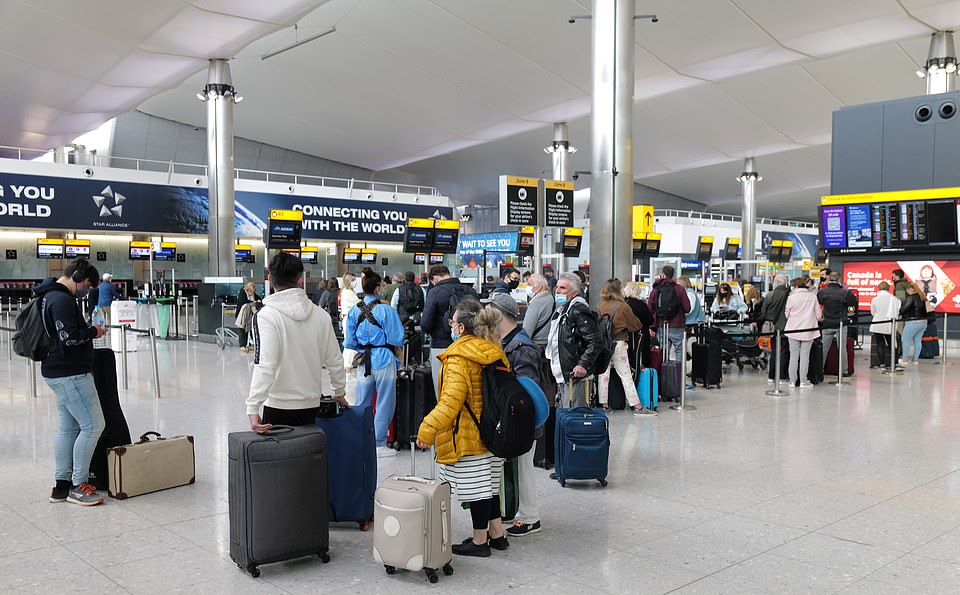 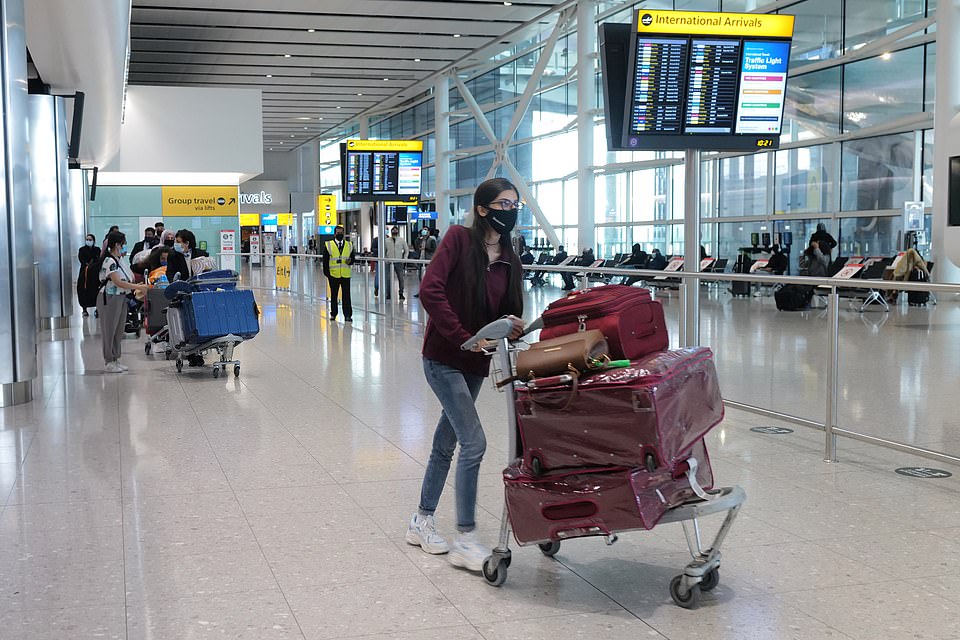 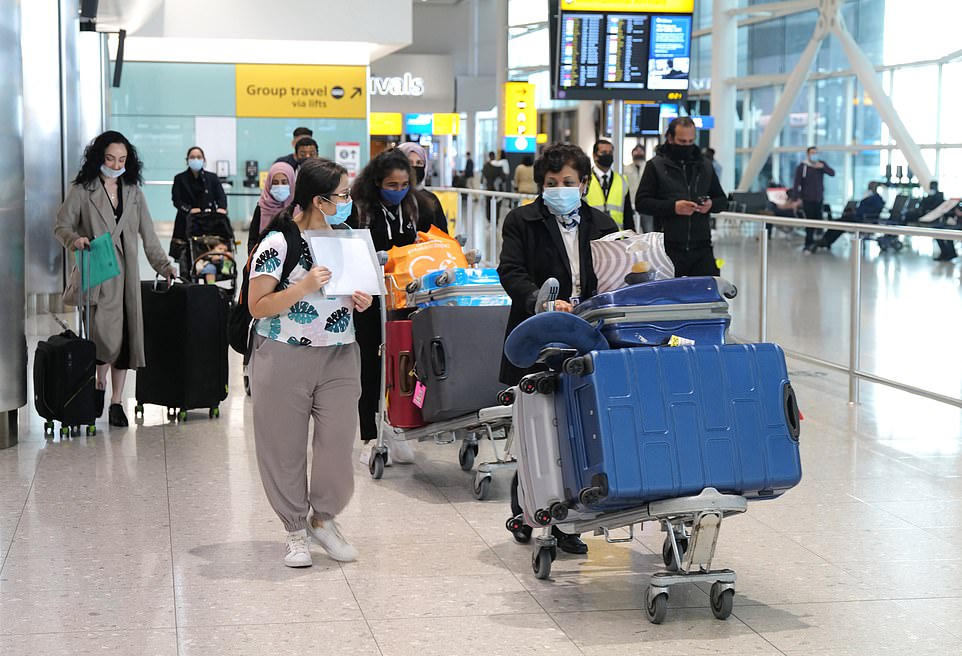 Tourism and airline chiefs have been left exasperated as the Government’s mixed messaging on holidays overshadowed the resumption of foreign travel.

As the ban on non-essential travel was lifted, Downing Street doubled down and insisted people should only be holidaying in the 12 countries on the green list.

MPs have also faced fresh calls to tighten up procedures for incoming passengers, as fears that UK airports could become ‘super spreader’ sites continues to grow. 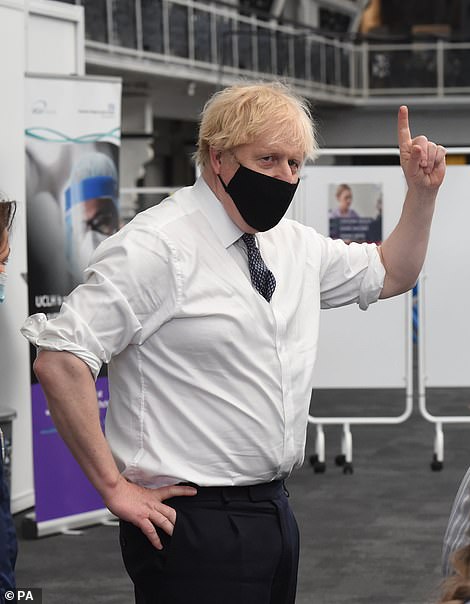 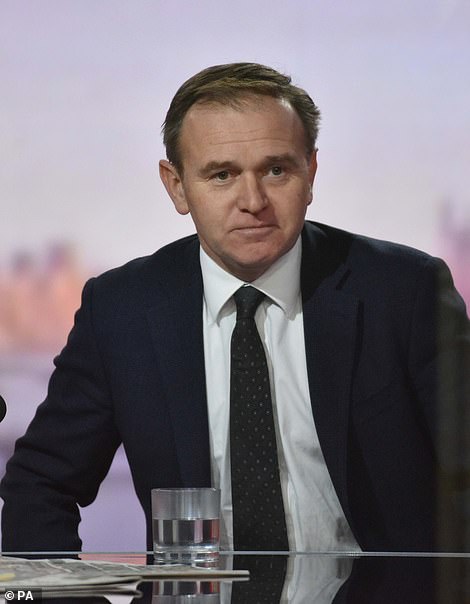 Those arriving at London Heathrow Airport faced queues of up to three hours today as calls mounted to ensure arrivals from ‘red list’ countries such as India were separated from those coming in from other nations.

All arrivals are currently going into the same queues at the border, which has raised concerns over social distancing and people from amber or green list countries coming into contact with those from red list nations.

Downing Street has insisted that it is down to airports to make sure border queues happen in a Covid-secure way, and that the Government is ‘doing everything possible to make this process as efficient as possible’.

BY VIVEK CHAUDHARY IN ALBUFEIRA FOR MAILONLINE

British tourists wallowed in glorious sunshine and temperatures of 82F (28C) as many admitted that they were enjoying soaking up the rays and having the beach virtually all to themselves.

Thousands of Brits flocked to the Algarve yesterday, after Portugal allowed non-essential travel, but many preferred to kick off the first full day of their break lounging by hotel pools or enjoying a drink rather than flock to the region’s picture postcard beaches.

Patrick Ryan, 40, from Ruislip, West London, sat beside the beach in Albufeira, normally one of the most popular destinations for British tourists.

He said: ‘I was expecting it to be a lot busier but it’s actually lovely to see the beach not too busy. It feels as if I’ve got it all to myself and I’m loving just sitting in the sun and getting some Vitamin D.

‘My flight from Stansted Airport on Monday was very busy but I think most Brits are probably nursing hangovers and haven’t been able to get to the beach yet.

‘I really needed to get away because it’s been a difficult year and I’ve been on furlough, so I just want to sit in the sun for the whole week.’

One couple from Essex were fast asleep on the beach having flown in on Tuesday morning from Stanstead.

Rachel, who did not want to give her full name, said: ‘Just look at how pale I am. I needed to get away from the rain and into the sun. I’m going to lie on the beach for the whole week that I’m here.’ 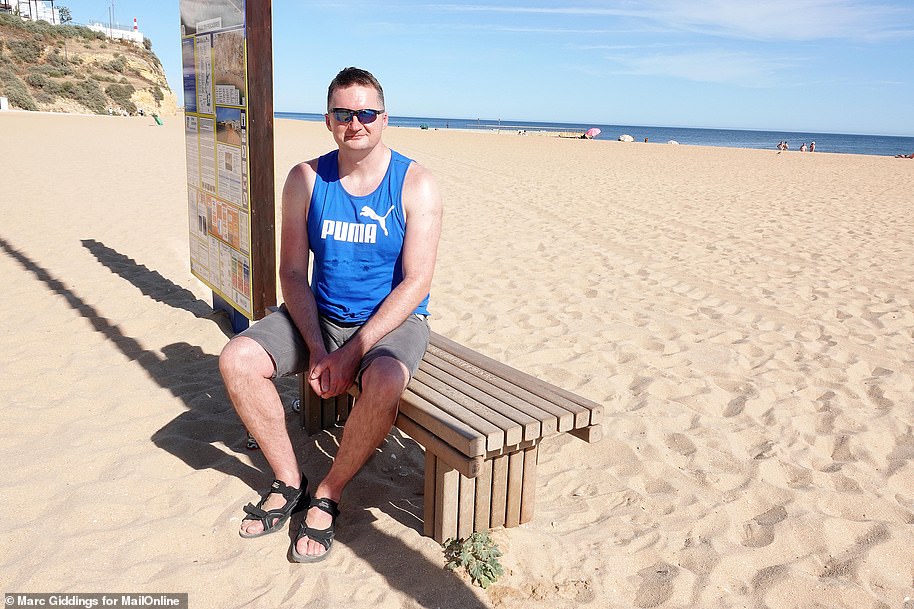 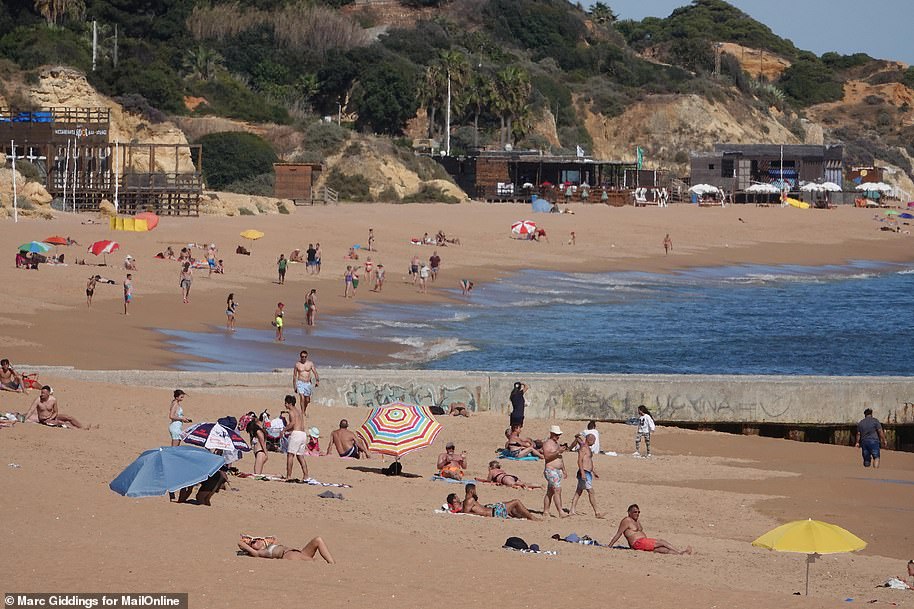 Susan Jones, 64, and her two friends, Paul Walker, 45, and Jennifer Wallace, 61, kicked off their holiday with a few drinks outside Tunes bar, a popular British haunt.

Mr Walker said: ‘We’ll eventually get to the beach, but I had to have a beer first. That’s the way I like to start my day when I’m on holiday.’

Ms Wallace, who is works behind the bar said: ‘We only opened up last week in time for the arrival of the Brits. I’m a bit surprised that it’s not busier but I’m sure that things will pick up.

‘Financially, the past year has been a disaster and we can’t wait for British tourists to return in full numbers. They love coming here for the traditional pub atmosphere and have a knees up to British music.’

Businesses in Albufeira have been closed for much of the past year and only re-opened last week in anticipation of a return of British tourists.

Rachel (pictured left) from Essex, said in Albufeira today: ‘I’m going to lie on the beach for the whole week that I’m here’

Jose Dominguez, 74 who runs Diona, a beachwear shop said: ‘Financially, I’ve really struggled and haven’t made any money over the past year. Most of my customers are from the UK and because of the pandemic, they’ve not been able to come.

‘I’m delighted that they’re now allowed to travel here but my worry is that it’s going to take a long time for businesses like mine to recover.

‘I must admit that I thought it was going to be a lot busier and my worry is that even when tourists do return, they’re not going to have as much money to spend.’