Dozens of swimmers stepped in to try and rescue at least one swimmer who was trapped in the strong rip tides that hit Panama City Beach on the weekend and left a man dead.

Forming a human chain, people stood strong in the water to try and get to at least one swimmer who had become overwhelmed by the current.

According to an onlooker known as Brian, a man and a woman were both rescued and a Sheriff’s officer said the man had a ‘bellyful of saltwater’ and would be ‘sick for a while.’

Some 38 rescues were made over the weekend since storm Barry hit the Louisiana coast. One 67-year-old man was found dead

The strong currents were caused by the devastating storm Barry that hit the Louisiana coast and made landfall in Intracoastal City, near New Orleans, on Saturday.

And the rip tide was still strong yesterday morning and despite double red flags flying, the human chain formed to try and help struggling swimmers.

Panama City Beach Fire Rescue had warned people to stay out of the water after they received numerous calls to help swimmers in distress.

Officials wrote on Facebook to discourage vigilante rescuers by saying: ‘Please avoid getting in the water. The decision to ignore the warnings has impacts far beyond the swimmer that becomes distressed.’ 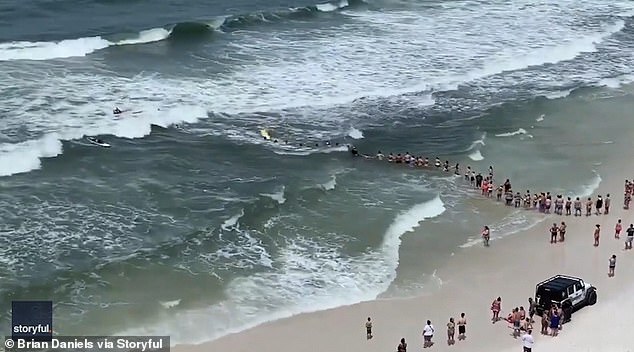 Footage of the incident was posted on Twitter and showed dozens of people lined up holding hands to try and support each other while they attempted to save a distressed swimmer.

Other footage then showed a lifeguard struggling to get to two stranded swimmers who were being pummeled by huge waves coming from all directions.

Some 38 rescues have been made since Barry hit, and one 67-year-old man died after becoming trapped in the tide.