John McCarthy, 31, from Gainesville, Florida, was arrested after he ‘threatened to drown kids and kill adults’ at his son’s school

A father has been arrested after he ‘threatened to drown kids and kill adults’ at his bullied son’s school.

John McCarthy, 31, told Westwood Middle School in Florida he would ‘rain hell on them’ if they didn’t address his son’s treatment by other students within 24 hours.

McCarthy denied making the death threat to school authorities but did admit posting on Facebook after a third alleged incident, reports the Gainesville Sun.

In the post written on Thursday, which has been deleted but was shared in an online petition, he claimed his son was ‘cornered’ by a group of children while in the pool during gym class.

He said they: ‘Splashed him and assaulted to the point of busting a blood vessel in his eye, giving him a black eye and almost drowning him.’

McCarthy claimed that when his son, whose name is not known, told the PE coach the response was to ‘stay away from them’.

The angry father then said that his son was ‘called into the dean’s office the next day and made to APOLOGIZE to the kids SO THAT THEY DO NOT JUMP HIM!’ 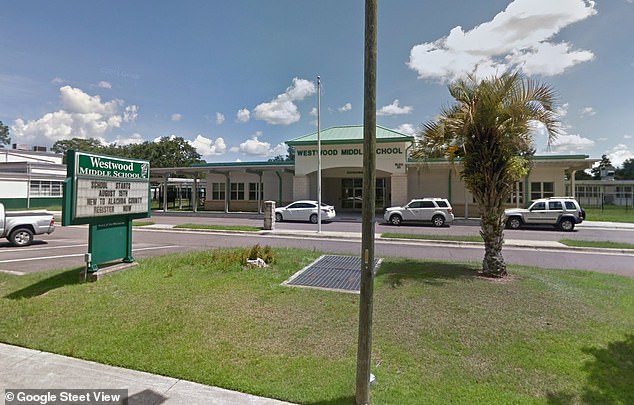 The angry father wrote in a Facebook post that he would ‘rain hell’ on Westwood Middle School in Florida, pictured, if they didn’t address his son’s treatment by other students within 24 hours

He said: ‘I’m not one of those soft ass parents, I will go to jail or the grave before I sit by and let this happen.’

A photograph of a young boy, thought to be McCarthy’s son, was also shared with the Facebook post and again with a petition created in support of the father.

In the lengthy post McCarthy also said that he was aware his own son was ‘no star student’ and that he wasn’t a ‘delusional parent’.

He said he holds school staff ‘personally responsible for my sons well being’ and that if his son was hurt that was their ‘fault’.

The father then explained how he had been removed from campus on Thursday for using his words ‘like a big boy’.

He said: ‘They felt the campus was not safe while I was there, so I removed my son from the campus because I feel he is no longer safe without me there.

‘I told the principal in front of everyone, “maybe if you kicked kids of campus for physical violence they way you kick a parent off campus for using his words, then you wouldn’t have these issues anymore”.

‘Funny thing is, I can probably be arrested for this post, but these people can still roam around campus intimidating my son. NOT ON MY WATCH!’

She said this this was ‘one of those situations where people do not have the facts, and they are unfortunately jumping to conclusions.’

A woman called Alaina Johnson set up a petition called ‘stop the BULLYING!’ after McCarthy was arrested, which has now had almost 6,000 signatures.

She wrote: ‘John McCarthy was arrested for standing up to Westwood Middle School for the harassment & bullying of his son.

‘Anyone who doesn’t agree with his arrest and feels that the school and school board needs to do more for his son NEEDS to sign this. Oh and his charge should be DROPPED.’