Christianity is on the verge of EXTINCTION in its birthplace the Middle East and Christians are living in fear, warns Foreign Secretary Jeremy Hunt who says Britain ‘can and must do more’

Foreign Secretary Jeremy Hunt has ordered a review into the plight of persecutd Christians around the world and how much help they get from Britain, saying ‘we can and must do more’.

The independent global review will look at the UK’s efforts to help some of the 215 million Christians worldwide the Foreign Office says faced discrimination and violence last year.

It follows what officials said was a ‘dramatic rise in violence’ against followers of the religion, with an average of 250 killed each month.

The review will be led by the Bishop of Truro, the Rt Reverend Philip Mounstephen, and report back around Easter.

The review should ‘consider some tough questions and offer ambitious policy recommendations’ that would allow the UK to offer the same backing to Christians as it does to groups like the Kurdish Yezidis who faced extermination by Islamic State, the FCO said.

Mr Hunt said: ‘Britain has long championed international religious freedom and the Prime Minister underlined our global leadership on this issue when she appointed my excellent colleague Lord Ahmad as her Special Envoy on Freedom of Religion or belief.

‘Today I have asked the Bishop of Truro to look at how the British Government can better respond to the plight of persecuted Christians around the world. 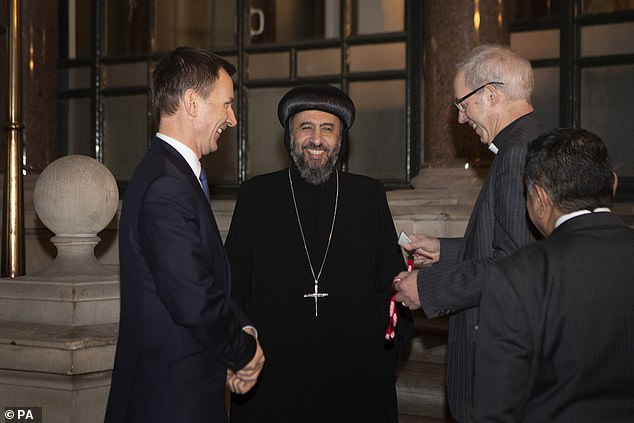 Foreign Secretary Jeremy Hunt (left), The Archbishop of Canterbury Justin Welby (right) with Archbishop Angaelos of the Coptic Orthodox Church of Britain (centre) at the meeting

The intervention comes after a large-scale outcry over the treatment of Asia Bini, a Christian woman who faced threats to her life after being acquitted of blasphemy in Pakistan.

Ms Bibi was held for eight years under a death sentence for supposed blasphemy after she drank from the same well as Muslim colleagues.

Her conviction was reversed by Pakistan’s supreme court earlier this year.

Large crowds took to the streets to protest against the court’s decision and the Government was accused of not doing enough to help her.

The review will have three aims:

– Mapping the persecution of Christians in ‘key countries’ in the Middle East, Africa and Asia.

– Provide an ‘objective analysis’ of the level of UK governmental support on offer, and

– Provide recommendations for a ‘cohesive and comprehensive policy response’.

Bishop Philip said that the plight of persecuted Christians is ‘an issue close to my heart’.

He said: ‘Part of the Christmas story tells how Jesus was himself the victim of persecution so it seems particularly timely to launch this review at this season.

‘I’ll be taking an objective look at how the British Government can better respond to the pressing plight of persecuted Christians around the world.’