Following two painful bouts of endometriosis, one heartbreaking infertility diagnosis, and a lengthy legal battle with her past employer, a former Fox News reporter is now five months pregnant and due to deliver a baby boy in August.

Diana Falzone, 35, achieved pregnancy through in vitro fertilization (IVF) in November, after the unexpected return of the disease that prompted her gender and disability discrimination claim against Fox News Network, which she settled earlier this month.

Falzone had sued Fox in May 2017 for allegedly demoting her position and taking her off the air, after she published an article on the company website in January 2017 detailing her first bout with endometriosis, and her resulting infertility.

Falzone spoke with DailyMail.com about the past two years, her continued desire to raise awareness about endometriosis, and what she has coming up next, aside from meeting her future son.

Endometriosis is a painful disorder in which tissue that normally lines the inside of a woman’s uterus — the endometrium — grows outside of the uterus, which can lead to infertility issues.

It affects an estimated 176 million women worldwide, according to endometriosis.org.

Falzone is one of those women, and she’s committed to continuing to share her story of battling, and ultimately triumphing over the disease, in the hopes of helping other women.

‘Unfortunately, there are many who suffer in silence [from endometriosis],’ Falzone wrote in the opinion piece that prompted her lawsuit against Fox.

‘It’s important that women support each other, and help advocate for one another. I shared my story with the hope that it could help just one person.’

‘I had heard of endometriosis but was not aware of how much of an impact it could have on one’s body, let alone possible infertility,’ she told DailyMail.com, at the time of the op-ed’s publishing.

Those sentiments still ring true for the journalist, as she’s now working on a book to raise awareness about endometriosis, and provide a resource for those supporting women who are diagnosed with the disease.

‘It was a really intense journey,’ Falzone said, describing the emotional toll of everything that she’s been through.

‘For any woman with any kind of reproductive health disease, or who has infertility and is going through IVF, it is such a challenge on a physical level,’ she said.

‘And you’re emotionally just scared because you don’t know what’s going to happen, so you’re holding your breath the whole time.’ 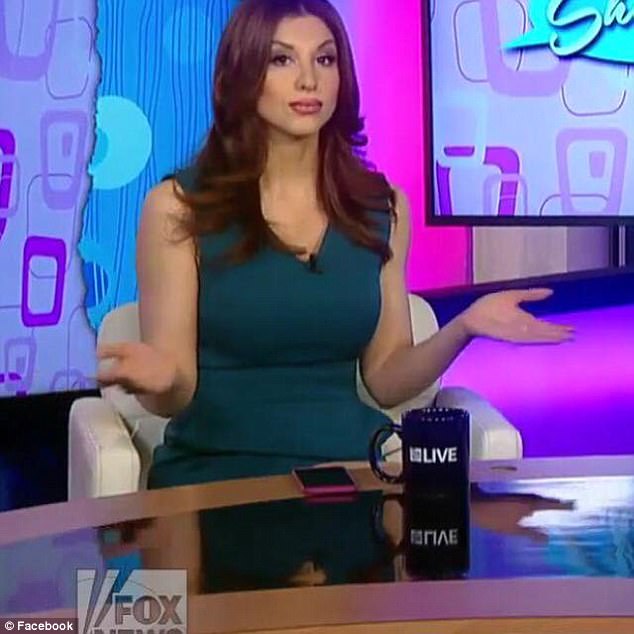 Fox411 host Diana Falzone filed a lawsuit in New York on May 2017 alleging that Fox, a unit of Twenty-First Century Fox Inc, discriminated against her on the basis of sex and disability

For Falzone, even though she has always been career-focused, she’s also always considered family her top priority.

Her plan was to be married by 34, and start her family by 36, ‘but endometriosis had another plan,’ she said.

In February 2016, she first learned she had endometriosis after excruciating pain landed her in the hospital for emergency surgery, she told DailyMail.com. That’s when she was diagnosed with infertility, as well.

Infertility doesn’t necessarily mean a woman can’t get pregnant, but it does mean that woman has a very low egg reserve, which makes naturally getting pregnant extremely difficult, without some extra help from science.

‘So on top of having to undergo a three-and-half hour surgery to remove the endometrial lesions from my organs I had to put a plan together with my doctors of how I was going to preserve my fertility,’ Falzone said.

Part of her plan involved freezing her eggs that Fall. She went through two rounds of egg retrieval, and by October 2016 she had seven eggs on ice.

Falzone said she felt OK about that, especially because her doctors had told her there was little chance of her endometriosis coming back.

A few months later, she shared her story on the Fox News website, under the headline, ‘Women Should Never Suffer in Silence,’ which she said was written by one of her editors.

She was first persuaded to share her story by the manager of her doctor’s office who urged her to speak out to help women who may be suffering in silence, alone.

But when she did, she was taken off the air, which she would later claim was due to her pre-approved decision to share her story. 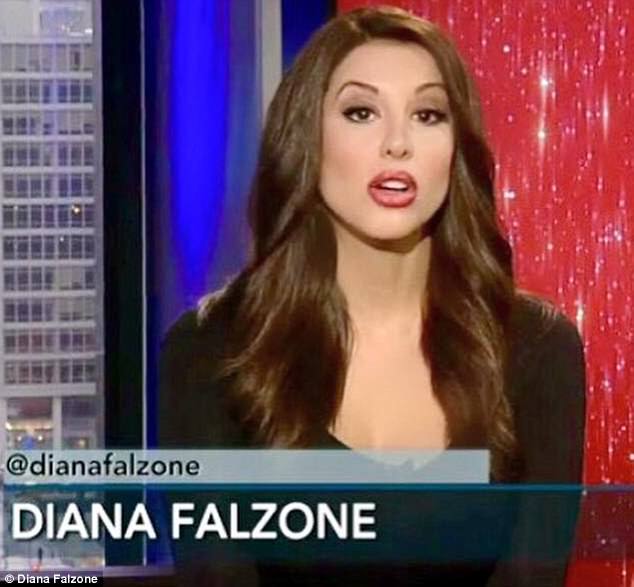 It was just a few months after that in May 2017 when she finally had enough, and filed her lawsuit for discrimination against Fox. That’s also when she started getting what she called ‘foreshadowing pain.’

‘It is so intense and debilitating and different than any other pain you’ve had, that you know its endometriosis, and you know it’s back,’ she said.

And it came back with a vengeance.

In June 2017, Falzone underwent a four-hour surgery to remove the uterine lining that was taking over her body.

‘The legions were everywhere,’ she said. ‘They were on my bladder, my uterus was fuzed to my abdomen, my ovaries were fuzed.’

‘My entire appendix was diseased by the endometriosis,  that’s why I was getting such terrible pain. They removed that.’

And this time, her doctors  told her another attack was not only possible, but likely. 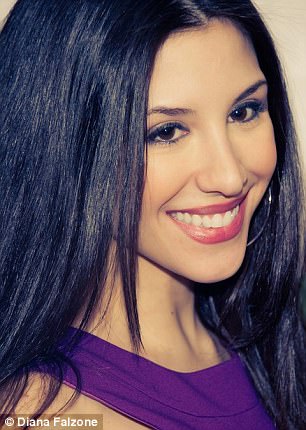 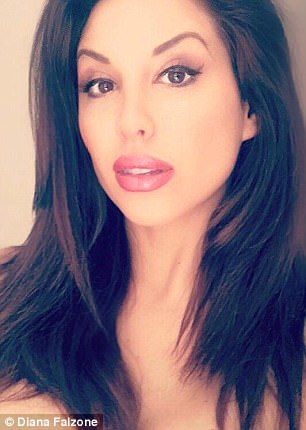 Falzone’s discrimination lawsuit against Fox, which claimed she was demoted and taken off the air for being a woman and writing about the medical condition that left her infertile, was one of several high profile claims against the company in the past year

So, after conferring with her reproductive immunologist and surgeons, Falzone agreed to begin the process as soon as her body was healed enough. She retrieved more eggs in September, and this time made embryos.

Then, on November 22, the day before Thanksgiving, Falzone went to see her doctor to have an embryo transfer.

The embryo implanted, and 10 days later her blood test revealed she was successfully pregnant, with what she’d later find out will be a baby boy.

But she wasn’t out of the woods yet. Endometriosis is like a auto immune disorder, so her body could have attacked the cells growing inside of her.

Thankfully, she was monitored closely, that hasn’t happened, and all of her troubles with her former employer are behind her.

Falzone’s discrimination lawsuit against Fox, which claimed she was demoted and taken off the air for being a woman and writing about the medical condition that left her infertile, was one of several high profile claims against the company in the past year.

The lawsuit was filed just as she was diagnosed with a returning case of the disease, and on the same day that Fox News co-President Bill Shine’s resigned, who wasn’t accused of sexual harassment but was named in lawsuits for allegedly covering up such behavior.

Falzone was represented by Nancy Smith and Martin Hyman, the same attorneys who filed Gretchen Carlson’s sexual harassment lawsuit in 2016 against Roger Ailes.

While the terms of Falzone’s settlement with Fox have not been disclosed, her legal representation helped Carlson secure a $20 million settlement, which ultimately led to the resignation of Ailes.

Her lawsuit was discontinued on March 16, one week after her last day with the network in New York City.

Falzone is currently reviving a previous project, a comic book she co-created with Geoff Skinner for pre-teens and teens called Hot Mess, that aims to help youth prepare for the tough parts of their high school years.

She’ll also appear in the upcoming season of Reelz Network’s Collision Course as an entertainment reporter and commentator, out this Spring. 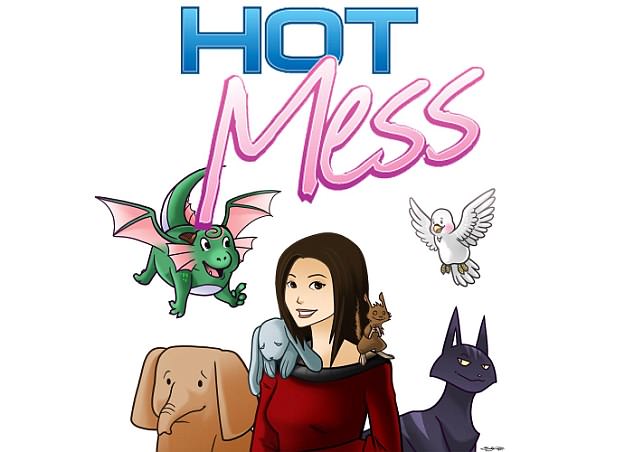 Falzone is currently reviving a previous project, a comic book she co-created with Geoff Skinner for pre-teens and teens called Hot Mess , that aims to help youth prepare for the tough parts of their high school years

Endometriosis is painful disorder in which tissue that normally lines the inside of your uterus — the endometrium — grows outside your uterus.

Endometriosis most commonly involves your ovaries, fallopian tubes and the tissue lining your pelvis. Rarely, endometrial tissue may spread beyond pelvic organs.

With endometriosis, displaced endometrial tissue continues to act as it normally would — it thickens, breaks down and bleeds with each menstrual cycle. However, because this displaced tissue has no way to exit your body, it becomes trapped.

When endometriosis involves the ovaries, cysts called endometriomas may form. Surrounding tissue can become irritated, eventually developing scar tissue and adhesions — abnormal bands of fibrous tissue that can cause pelvic tissues and organs to stick to each other.

Endometriosis can cause pain — sometimes severe — especially during your period. Fertility problems also may develop.

There is no cure, but symptoms can be managed by painkillers, hormone medication and removal of the endometriosis tissue.