French aid worker, 75, is released by her Al-Qaeda captors and will be welcomed home by Macron

Petronin was released along with a top Malian politician and two Italian hostages late Thursday.

The last French citizen known to have been held hostage anywhere in the world since her abduction in 2016, a white-robed Petronin was embraced by her son as she touched down in Mali’s capital, Bamako.

A plane bringing her to France left Mali on Friday morning and was expected to touch down at 12.30 pm (1030 GMT) at Villacoublay south of Paris, where she will be met by Macron, the presidency said.

The president spoke of ‘immense relief’ at the septugenarian’s release.

French ex-hostage Sophie Petronin, who was released and flew to Bamako, Mali is seen with her son Sebastien Chadaud Petronin during a press conference in Bamako this morning 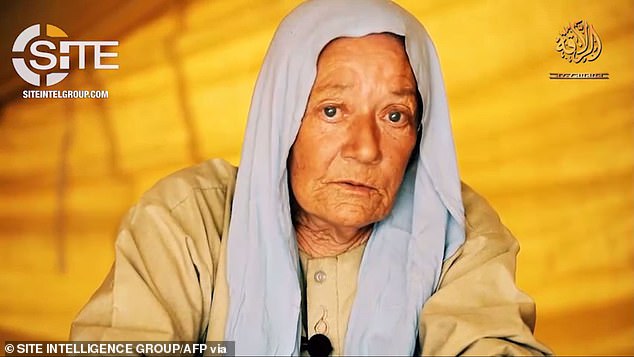 In this video grab made on June 13, 2018 from an undated and unlocated video provided by the SITE Intelligence Group shows 75 years-old Frenchwoman Sophie Petronin, a hostage held by Al-Qaeda’s Mali branch after she was kidnapped in Gao, Northern Mali 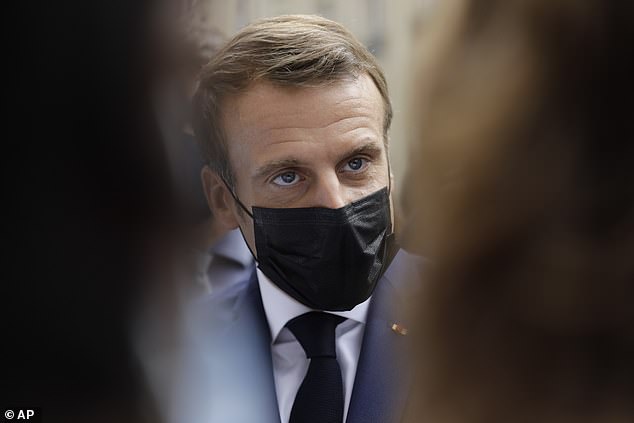 In this file photo from 6 October, French President Emmanuel Macron talks in Paris. Macron is due to meet Petronin in Villacoublay, south of Paris later this morning

Malian politician Soumaila Cisse, a three-time presidential candidate and former opposition leader, was also hugged by loved ones and greeted by cheering crowds on his way home.

‘It was a difficult period, but it has been overcome,’ the 70-year-old Cisse, also in white robes, told AFP.

Italian priest Pier Luigi Maccalli, who was abducted in neighbouring Niger in 2018, and Nicola Chiacchio, who went missing last year while on a solo bicycle trip, were also freed.

Mali’s government has not revealed the circumstances of the releases, which followed talks with hostage-takers.

Malian authorities freed more than 100 prisoners over the weekend, sparking speculation of a swap for Petronin and Cisse.

After first emerging in northern Mali in 2012, a brutal jihadist insurgency has spread to the centre of the country as well as Burkina Faso and Niger.

Thousands of soldiers and civilians have died in the conflict and hundreds of thousands have been displaced. Kidnappings are common. 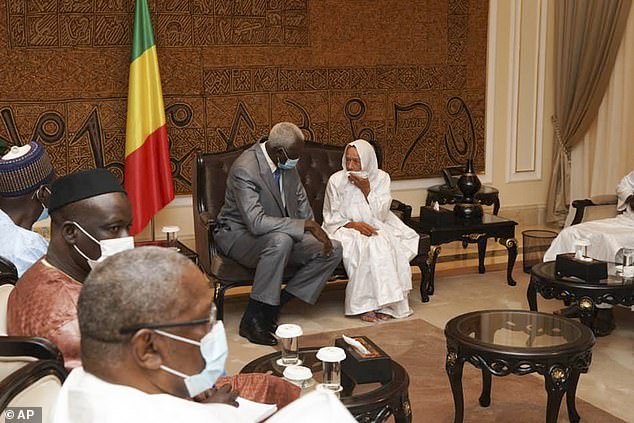 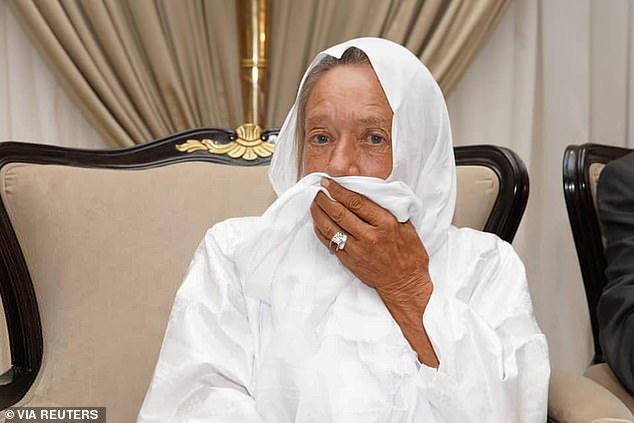 French aid worker Sophie Petronin, who was freed from captivity in the hands of Islamist insurgents along with a Malian politician and two Italians, is pictured at the Presidential Palace in Bamako, Mali this morning

A frail-looking Petronin, who is known as ‘Mama Sophie’ and dedicated years of her life to a charity for malnourished children, was twirled around by her son, Sebastien Chadaud, as she arrived in Bamako.

Footage shared on social media showed the mother and son with their foreheads pressed together, as Petronin told him: ‘You were there by my side telling me, hang in there.’

In an unexpected development, the prime minister’s office announced Thursday that two Italian nationals had also been freed.

Petronin was abducted by gunmen on December 24, 2016, in the northern city of Gao, where she did her charitable work.

Cisse was kidnapped on March 25 while campaigning in his home region of Niafounke, central Mali, ahead of parliamentary elections.

Speaking to reporters, Petronin thanked the Malian and French governments for their help. 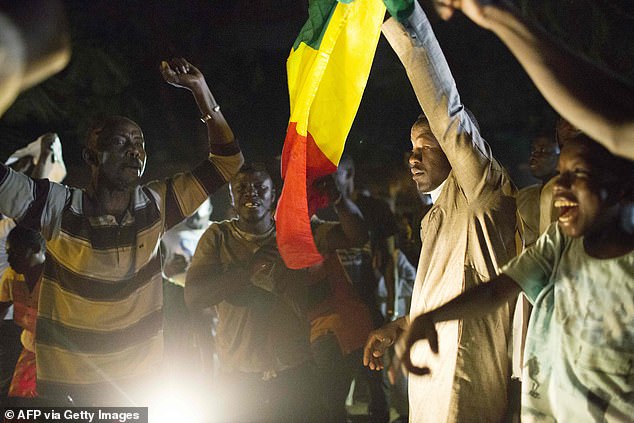 Supporters of Malian politician Soumaila Cisse celebrate in front of his house in Bamako, Mali last night, after hearing the news that he landed at the Bamako airport after having been freed from captivity

‘For Mali, I will pray and implore the blessing and the mercy of Allah, because I am a Muslim,’ she said.

‘You say Sophie, but it’s Mariam, you have before you,’ she added.

Petronin appeared in good spirits despite concerns about her health after a 2018 hostage video showed her looking emaciated.

The footage triggered alarm among her family members, who pressured Macron to negotiate with her captors.

France’s president had said several times that his services were working ‘tirelessly’ for Petronin’s release.

‘To her family, to her loved ones, I send a message of sympathy,’ Macron tweeted on Thursday, adding: ‘The fight against terrorism in the Sahel continues’.

Mali’s former colonial power France has 5,100 soldiers deployed across the Sahel as part of its anti-jihadist Operation Barkhane.

One of the hostage negotiators, who requested anonymity, told AFP the talks remained difficult to the end.

The intermediary said releasing prisoners had been unavoidable. ‘Yes, terrorists were released,’ he said. ‘We had to obtain the release.’

The office of Mali’s prime minister said the four hostages had been held by the Group to Support Islam and Muslims.

The alliance comprises jihadist groups aligned to al-Qaeda, and has claimed responsibility for some of the biggest attacks in the Sahel.

The prisoner release came with an interim government due to govern Mali for 18 months before staging elections after a military junta overthrew president Ibrahim Boubacar Keita in August.

The kidnapping of former opposition leader Cisse was one of the factors that fuelled popular protests leading to Keita’s ouster over his perceived inability to crush the Islamist insurgency.

Several hostages remain detained by militant groups in the Sahel.