A frontline Covid worker had his long-awaited Bali holiday ruined after Jetstar lost his bag full of scuba gear worth $3,000.

Malcom’s wife Toni planned the surprise Indonesian scuba diving holiday for her husband’s 60th birthday after he spent two years working on the frontline during Covid-19.

The pair flew to Bali from Melbourne via Darwin despite long delays and multiple flight cancellations.

However, after arriving in Bali they discovered that Jetstar had lost one of their checked-in bags which was carrying $3,000 worth of scuba gear.

Malcom labelled the whole experience as ‘awful’ and said he was told Jetstar was unable to locate his bag.

‘It has been awful, actually,’ Malcom told the Today show on Thursday.

‘In the check-in we had three bags checked and only two arrived from Darwin.

‘Sadly, it was a celebratory holiday to go scuba diving in Indonesia, which is a fantastic place to dive, but they’ve (Jetstar) lost my dive gear.

‘The sad thing about it is that Jetstar cannot give us any idea as to where the bag is, they scanned it in and the problem with that is they just can’t even tell us where it is now.’

Malcom’s wife Toni claims the airline told her they have ‘no record’ of scanning the luggage.

Toni and Malcom (pictured) have had their long-awaited Bali holiday ruined after Jetstar lost their checked-in bag carrying $3,000 worth of scuba equipment

Toni said she had been planning the holiday for a long time.

‘I’m really disappointed for Mal,’ Toni said. ‘I think he was a fish in a previous life as he needs to be on or under the water and this was a holiday that he really needed.

‘He was frontline services during Covid in the past two years. This is a holiday I have been planning for a long time.

‘It included a lot of surprises for him. This wasn’t one that I planned.’

Both Malcom and Toni are waiting to hear from Jetstar, despite being told they would be contacted within 24 hours via email after reporting their lost bag.

The pair called Jetstar three times but feel as though the airline doesn’t care or understand their concern, labelling their treatment as ‘disgraceful’.

‘Nothing. No emails, no phone calls, no texts, no nothing,’ Toni said.

‘No acknowledgement whatsoever, at all, and we’ve spent hours trying to get through to them.’

Jetstar told Daily Mail Australia it ‘sincerely apologises’ for disrupting Malcom and Toni’s journey and are doing everything to locate their missing bag.

‘This is obviously not the experience we want for our customers and we sincerely apologise to Malcolm and Toni for the disruptions to their journey,’ Jetstar said in a statement.

‘Our customer team is working hard to locate the missing bag and will reach out to Malcolm and Toni to discuss what further support we can provide.’

The airline vowed it is doing everything it can to overcome recent operational challenges including hiring more staff, adding special services to support during disruptions and creating a buffer between flights.

‘We thank our customers for their understanding and patience as we continue working to improve our operations,’ Jetstar said. 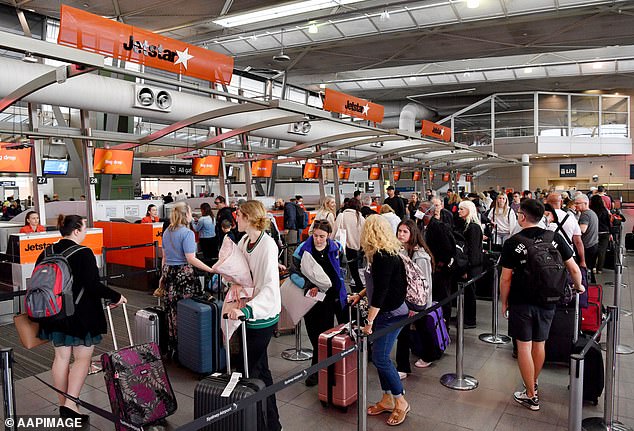 Toni claimed Jetstar (pictured, queues at Jetstar departure terminal in Sydney Airport) told the couple they have ‘no record’ of the luggage and said they had not heard from the airline despite being told they would be contacted within 24 hours with an update

It comes after the airline cancelled further flights just days after issuing an apology to customers over ongoing flight disruptions.

On Wednesday passengers were told their flight from Honolulu to Melbourne had been dumped 24 hours before its scheduled take-off.

Travellers were told about the cancellation prior to arriving at the airport and were issued $300 vouchers for accommodation while they worked ‘around the clock’ to replace a damaged windscreen on one of their aircrafts.

‘We understand how frustrating and inconvenient disruptions are and we sincerely apologise to customers impacted by this unavoidable change,’ a Jetstar statement read.

Two days earlier the airline promised travellers that flight disruptions would be a thing of the past.

Jetstar chief operating officer Matthew Franzi told 9News on Monday that ‘bad luck’ was primarily to blame for the disruptions and acknowledged the budget airline had ‘not delivered to the customer expectations’.