Employing one of his fairly limited repertoire of impressions, Gareth Southgate reflected on the potential success of English clubs in the Champions League and how it could dent his chances of winning the Nations League.

‘As an Aussie coach I know says, “Good luck with that, mate”,’ he said. His audience mistakenly assumed it was Eddie Jones, when in fact it was Alastair Clarkson of Aussie Rules fame.

However England’s manager is nevertheless watching some of the more prominent members of his squad pursue club football’s greatest prize while wondering when he might get them for the national team’s best chance of lifting a trophy since 1966. 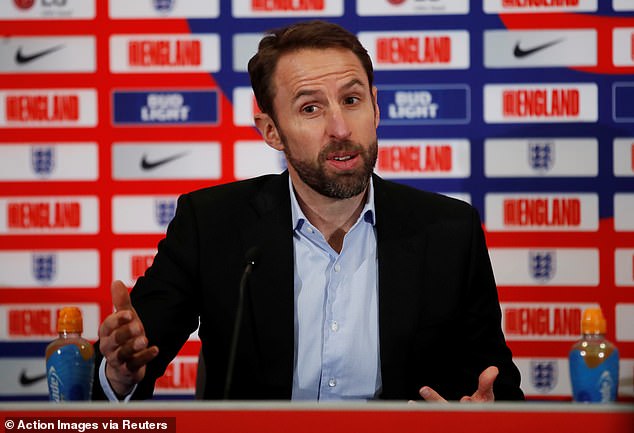 ‘It could be a mess,’ Southgate conceded at St George’s Park on Wednesday after announcing his squad for the Euro 2020 qualifiers against the Czech Republic and Montenegro.

‘Let’s say two of our teams made it to the Champions League final. We wouldn’t see them, at best, until the Monday before we play on the Thursday.

‘We’ve reached a semi-final, qualified six months ago for what is a great opportunity to win something, then you don’t get the team together.

‘With the emotion of that game (the Champions League final), can those players even realistically play on the Thursday night for us?

‘Our preparation will be here (at St George’s Park), broken up with breaks at home to give players the space that they would all need to psychologically switch off, and we’d have to look at Champions League final players when we get to it.’

With the plan to head to Portugal the day before that semi-final against Holland in Guimaraes on June 6, two training sessions at the national football centre is not exactly ideal.

However Southgate can at least plan in the knowledge that perhaps the most exciting selection he made on Wednesday will not be affected by events in Madrid on June 1.

Declan Rice was in the squad as expected and, while Southgate is clearly reluctant to build up the 20-year-old too much, his ability to perform that midfield holding role with more flair and dynamism than the obvious alternatives could represent genuine progress for England.

On Wednesday Southgate felt it more necessary to defend Rice against the backlash that followed his decision to switch allegiance from the Republic of Ireland to England, not least in the face of criticism from former internationals working in the media.

Andy Townsend and Kevin Kilbane were among the more vocal, while Alan Shearer spoke against the rules that allow such a transfer even if he wished the London-born West Ham player well.

‘It’s easy to be vocal when you haven’t walked in those shoes,’ said Southgate. ‘I think he spoke really eloquently about being somebody of dual heritage and what that means.

‘For me, it was easy — I could only play for England, and for lots of people who have commented it was the same.

‘There are others who have commented despite the fact that they didn’t play for the country of their birth, so they’ve benefited from some of the rules that are there, too.

‘Fundamentally, he’s a boy who was born in London and educated at an English academy. So, I don’t think there’s too much that he needs to defend, but I understand the fact that there was a senior cap with Ireland, so that was always going to make it more complicated.

‘I don’t know what the percentages would be, but high percentages of players could have played for a number of countries, so the world is changing.’ 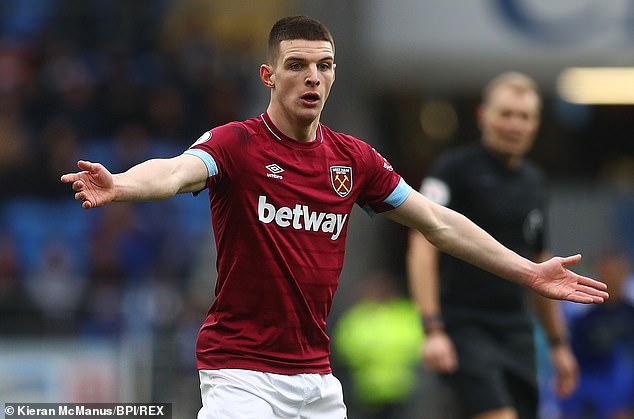 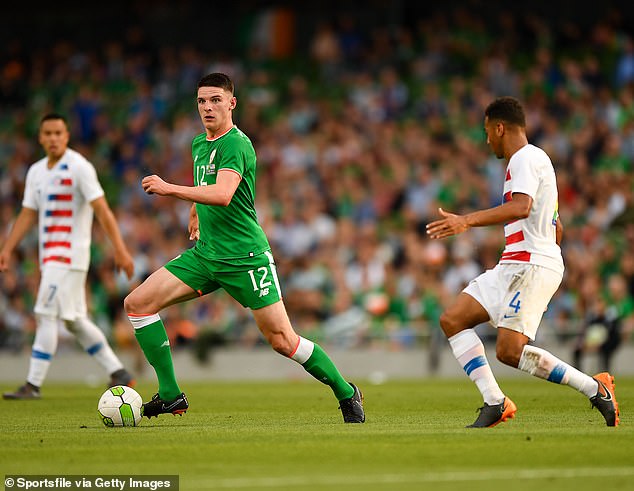 Southgate clearly likes Rice. ‘What we’ve seen throughout has been an impressive character, a young man who shows tremendous leadership and responsibility,’ he said.

‘Those sorts of personalities, of which we have quite a few in our squad, tend to go and achieve a lot more than others might. And we’ve also seen increasing technical and tactical awareness in that midfield position because his breakthrough into the team was as a centre back.

‘He’s very comfortable on the ball and has really good awareness of the position he’s playing at the moment. I think he’s been fundamental to the balance of West Ham’s team and how they’ve wanted to play.’

Rice’s progress is also, in Southgate’s opinion, a positive message for young players who suffer rejection.

‘Chelsea released him at 15, I think,’ he said. ‘So for kids who are rejected in life, it doesn’t need to be the end for you.’