Gas prices have jumped by 10 cents since Harvey hit

The average price at the pump nationwide averaged $2.45 per gallon on Thursday — that’s 10 cents higher than a week ago and a nickel increase since Wednesday.

In Texas, where Harvey caused massive flooding, the price per gallon was $2.26 which is 12 cents higher when the hurricane threatened Texas last week.

Dallas had the most expensive gasoline in the Lone Star State at an average $2.37 per gallon, sending drivers in a panic to fill up tanks while stations still carried fuel.

The city saw a flux of drivers rushing to the pumps, causing long lines, stations to run out of gas and some locations to withhold fuel due to the demand surge.

The national average for a gallon of gas has increased 10 cents and is $2.45 as of Thursday. The surges are in response to the flooding caused in Texas by Harvey. Pictured: Long lines of drivers waiting to get gas in Lewisville, Texas, on Thursday

Harvey made landfall in South Texas last Friday, leading to coastal flooding and swamping of much of Houston.

Experts forecast that the price will continue to rise another 5 cents, due to Texas shutting down several oil refineries because of massive flooding in the state.

States in the southeast also saw a steep hike, increasing by 17 cents in Georgia and by 20 cents in South Carolina.

Tom Kloza, chief oil analyst for the Oil Price Information Service, said to CNN: ‘There’s a worry now that most of the Texas refineries could be compromised for weeks rather than days.’

And price hikes could be the least of people’s worries, as the Dallas-Fort Worth area rushed to their pumps to find lines and some stations out of fuel just ahead of the Labor Day weekend, reported the Dallas Morning News. 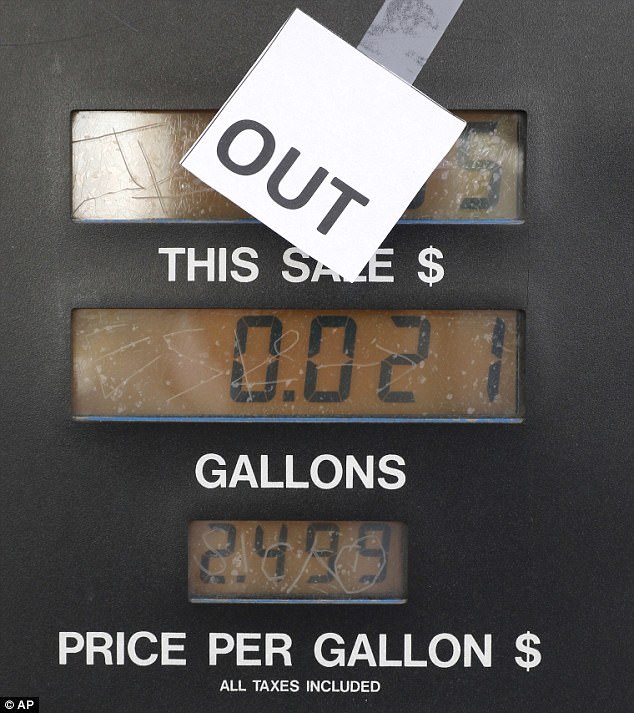 Dallas had the most expensive gasoline in the Lone Star State as of Thursday at an average $2.37 per gallon, sending drivers in a panic to fill up tanks while stations still carried fuel

Prices in North Texas have already reached over $3 a gallon, with one downtown Dallas pump advertising for $3.97 a gallon, according to the Associated Press.

One gas station Chain, QuikTrip with 135 stations in the Metroplex, said the company is keeping about half of its locations without gas.

Spokesman Mike Thornbrugh said: ‘QuikTrip is going to designate certain stores in all quadrants of the Metroplex and make sure those particular stores will have gasoline.

‘We have been through this in the southeast Atlantic area. If we tried to keep every store full of gasoline, we’d have outages everywhere. Nobody knows the extent of the damage to the pipelines and refineries. They’re under water.’

At least two major pipelines – one that ships gasoline across the southern United States and up to New York, and another that flows north to Chicago – have been slowed or stopped because of flooding and damage.

Hurricane Harvey forced the shutdown of at least eight Texas refineries, according to the American Automobile Association and officials hoped to resume normal flow by Sunday.