One would think that Oprah Winfrey’s best friend — an uber-successful journalist and TV personality in her own right — could pull a few strings and get just about whatever she wants, when she wants it.

But Gayle King revealed on Monday that she tried fifteen different Popeyes locations in search of the chain’s new fried chicken sandwich, and she still left empty-handed.

The 64-year-old CBS This Morning host wrote on Instagram that she and her nephew Cameron Harrison, an Associate Producer at Good Morning America, attempted to visit more than a dozen restaurants in a futile search for the incredibly popular dish.

Before shot: Gayle King revealed on Monday that she had to go to fifteen different Popeyes locations in search of the chain’s new fried chicken sandwich, and she still left empty-handed 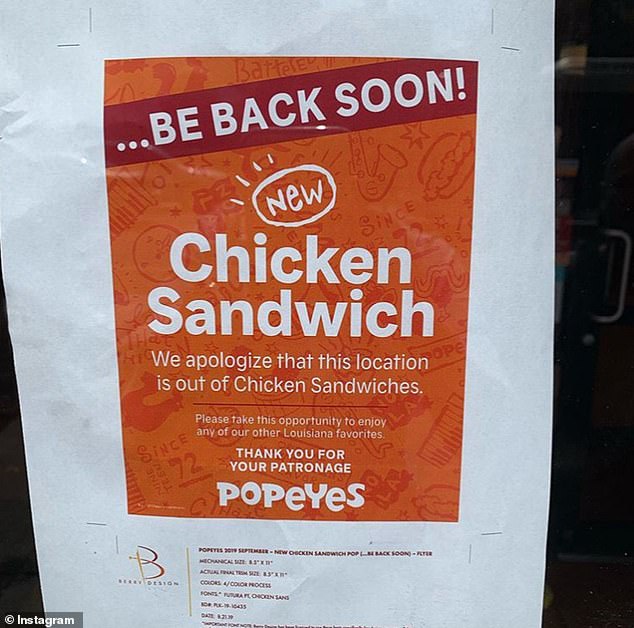 Sad: She shared a photo of a sign posted on the door of a Popeyes proclaiming that the location had sold out of the sandwich 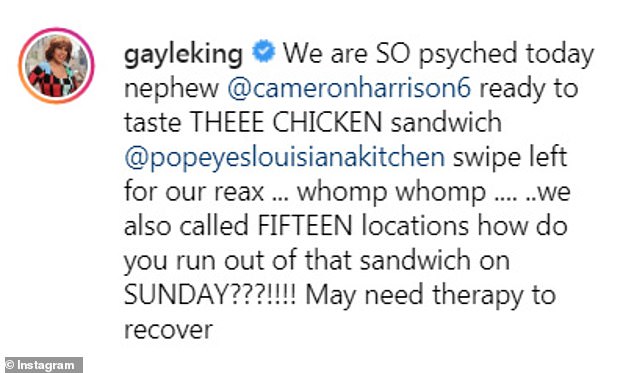 ‘We also called FIFTEEN locations how do you run out of that sandwich on SUNDAY???!!!! May need therapy to recover,’ she said

Popeyes debuted its first-ever chicken sandwich earlier this month to much fanfare — but the chain seems to have underestimated the demand for its latest menu addition.

Stores across the US have been selling out of the sandwich, posting signs for disappointed customers who have taken to social media to complain.

Gayle is one of them. On Monday, she shared a photo of herself with her nephew Cameron outside a Popeyes, both with wide smiles on their faces — presumably before they got the bad news.

‘We are SO psyched today nephew @cameronharrison6 ready to taste THEEE CHICKEN sandwich @popeyeslouisianakitchen,’ she wrote. 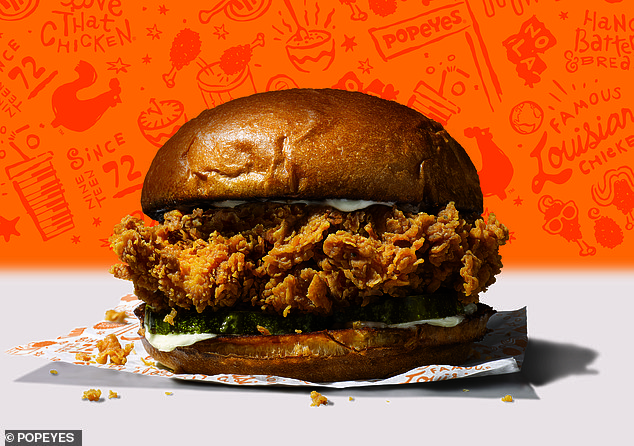 Too popular: Stores across the US have been selling out of the sandwich since it debuted

‘Whomp whomp,’ she added, also posting a picture of a sign posted outside proclaiming a store to be sold out.

‘We also called FIFTEEN locations how do you run out of that sandwich on SUNDAY???!!!! May need therapy to recover.’

Later, she talked about the quest on CBS This Morning, saying: ‘I swear to you, I’m gonna find that darn chicken sandwich today.’

It seems surprising that Gayle couldn’t have had them delivered by someone who works for the company, though it seems the star chose not to use her connections to jump the line.

After her post and talk on TV, though, it’s certainly possible that Popeyes is rushing to get sandwiches over to her as soon as possible.

But it’s not the first time down-to-earth Gayle hasn’t used her power or connections to score a better deal. 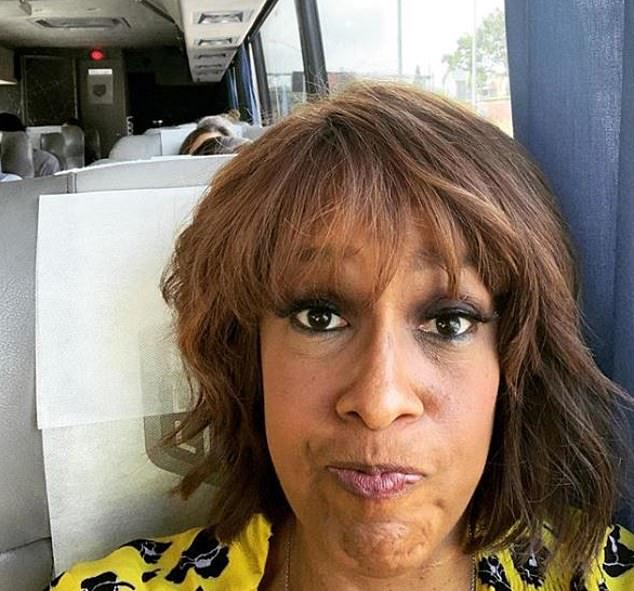 Frustrated: Earlier this summer, Gayle documented her journey from New York City to the Hamptons on Instagram, starting with a photo of herself on the hot bus

Hellish: The CBS This Morning anchor revealed in her caption that they were stuck in traffic in 80-degree heat without air conditioning

Earlier this summer, Gayle — who earns $11 million a year from CBS — complained about getting stuck in traffic while taking a bus out to the Hamptons.

The CBS This Morning anchor, who has enjoyed many lavish vacations with Oprah over the years, took to Instagram in early July to bemoan her uncomfortable journey from New York City to the popular weekend destination, lamenting the lack of AC and the ‘bumper to bumper traffic’ while sharing a sweaty selfie.

‘On the BUS heading to the Hamptons temperature in the high 80’s and bumper to bumper traffic & we have NO air … I’m now wondering if I’m a bus person. Driver and fellow sweating humans all very nice… FUN!’ she captioned the image.

Ironically, unlike many other patrons who regularly use the bus, it was likely well within Gayle’s spending power to opt for a much speedier and more luxurious form of transportation to the Hamptons, such as a pay-per-journey helicopter from the city.

Blade, a company that offers helicopter services to and from New York, has trips from Manhattan to the Hamptons, with tickets ranging from $495 to $694 per person. 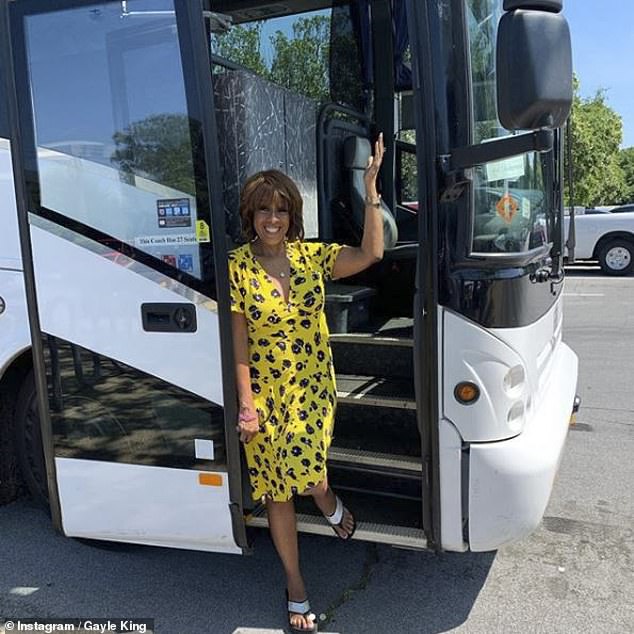 All smiles: In a follow-up post, Gayle shared they were able to switch buses after two and a half hours and finally had air conditioning 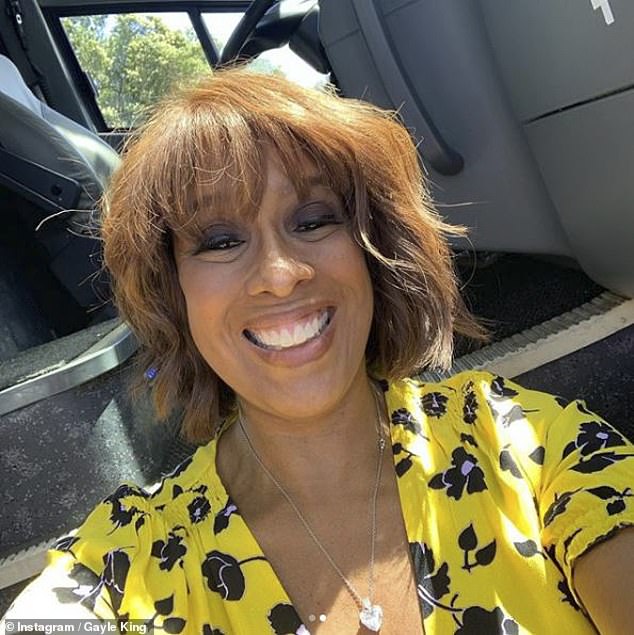 Hamptons style: The journalist looked reading for summer in a yellow dress with navy flowers 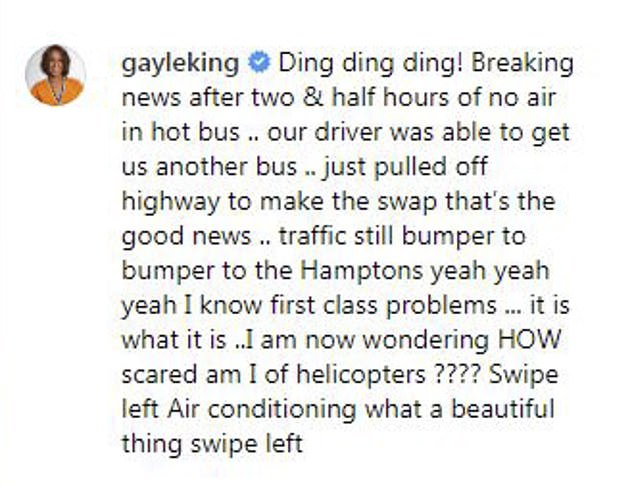 She gets it: In her caption, she admitted that she knew her issues were ‘first class problems’

Even a few hundred dollars is a relatively paltry sum when compared with the $11 million-a-year that Gayle is believed to earn, after more than doubling her contract at CBS when it was renegotiated earlier this year.

Alternatively, a cab from New York City to Southampton is estimated to cost around $300, while an Uber would likely be around $250.

Meanwhile, a one-way ticket on the Hamptons Jitney — which is the main bus service that operates between New York City and the Hamptons — costs between $23 and $35, depending on the route and whether it is pre-booked.

As Gayle demonstrated, however, the bus isn’t always the most comfortable way to travel, nor is it the quickest.

However, her decision to choose a more penny-pinching means of transportation gave one friend the chance to poke a bit of fun at the CBS star.

Gayle’s former assistant Arianna Davis, who is now the digital director of OprahMag.com, couldn’t resist commenting that her boss has sworn off the bus before. 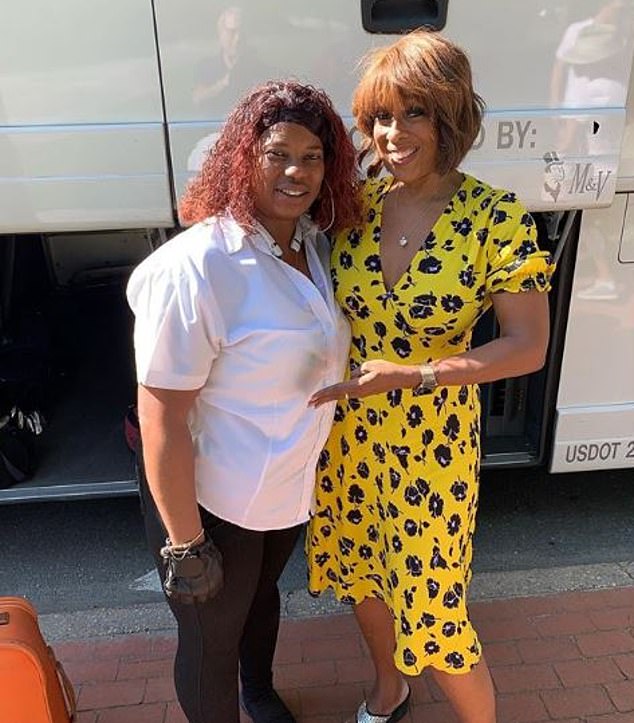 Arrival: The final image from her journey shows her posing with her bus driver Desiree at their destination

‘I distinctly remember you telling me when I was your assistant you’d never get on a bus to the Hampton’s again… guess you forgot,’ she joked.

In her follow-up post, Gayle shared photos of herself posing in the doorway of a bus, revealing they were able to switch vehicles and finally had air conditioning.

Although she was clearly hot in the steamy bus, the journalist looked reading for summer in a sunny yellow dress with navy blue flowers and sparkly flip flops.

‘Ding ding ding! Breaking news after two & half hours of no air in hot bus … our driver was able to get us another bus … just pulled off highway to make the swap that’s the good news … traffic still bumper to bumper to the Hamptons yeah yeah yeah I know first class problems … it is what it is ..I am now wondering HOW scared am I of helicopters?’ she wrote.

The final image from her journey shows her posing with her bus driver, explaining the roughly two-and-a-half-hour trip took almost double the time.