Generation Game contestants will have to wear SAFETY GOGGLES

Contestants on the revamped Generation Game will have to wear safety goggles during the spinning plates challenge.

Health and safety experts called in to consult on the show said families would have to wear the goggles to prevent the BBC from being sued if they are injured.

The show, which first aired in 1971, is due to return tonight with former Great British Bake Off hosts Mel Giedroyc and Sue Perkins as presenters.

Crew working on the show told the Express that they thought the contestants were being treated like children.

Contestants on the revamped Generation Game will have to wear safety goggles during the spinning plates challenge because BBC bosses were worried families might sue (pictured: Andrew Van Buren, Sue Perkins, and Mel Giedroyc)

One said: ‘Its hardly the most dangerous stunt on telly. How many people wear safety goggles at Greek weddings where they smash all the plates? It’s just health and safety madness.’

Jim Davidson replaced him and was the host during the 1990s when plate-spinning expert Andrew Van Buren introduced teams to spinning plates on rods.

Mr Davidson criticised the new hosts of the much-loved TV show as being ‘not right’ for the progamme which used to draw audiences of 25million.

He said: ‘They’re not right, they won’t know how to ad-lib. They’re not there to teach them how to bake a f***ing cake.

‘I don’t know these women, I’ve never heard of them but you need someone that’s going to be able to ad-lib and drive the show along.’ 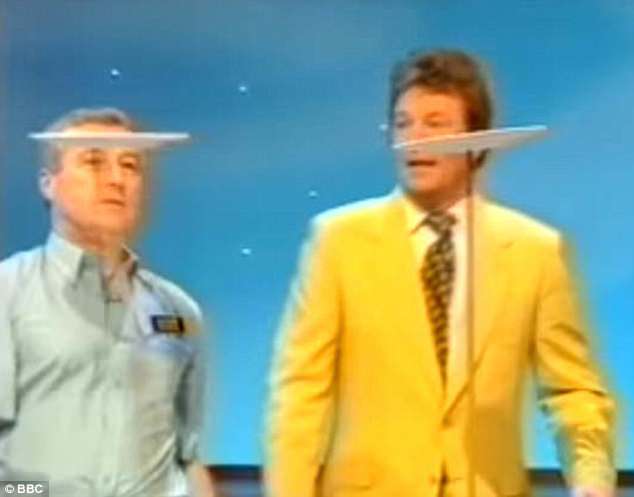 Crew members on the show have said: ‘It’s just health and safety madness’ (pictured: former host Jim Davidson during a plate spinning challenge in the 1990s)