Caravans were stuck in a huge jam on the M5 this morning as more than 10 million motorists hit the road today and England’s beauty spots are braced for a huge influx of tourists after lockdown travel restrictions were eased.

The M5 in Exeter was swamped with camper vans heading to the coast as tourists made their weekend getaway on what has been dubbed ‘Super Saturday’.

Traffic was also underway on the M25 in Kent as hotels, restaurants and pubs re-open with people being able to stay overnight or longer in England.

There were multiple reports of accidents on the M5 involving holiday traffic, with the Exeter-based HART ambulance team seen heading southbound towards Junction 31.

Approximately 6.5million Britons are planning overnight stays with friends or family, with around two million driving to campsites, another 680,000 heading to caravan sites and a further million to stay in hotels and B&Bs, according to research from the RAC.

It comes as booking websites report an increase in traffic, with Booking.com seeing a ‘spike’ in searches for domestic properties and Virgin Experience Days having a 65 per cent month-on-month rise in visits to its ‘Short Breaks’ category.

But most will drive to destinations of no more than two hours away from their home, an average of 110 miles, according to research from car sharing club Zipcar UK.

The M5 Exeter was swamped with camper vans and caravans heading to the coast at Junction 30 this morning, as tourists made their weekend getaway on what has been dubbed ‘Super Saturday’ 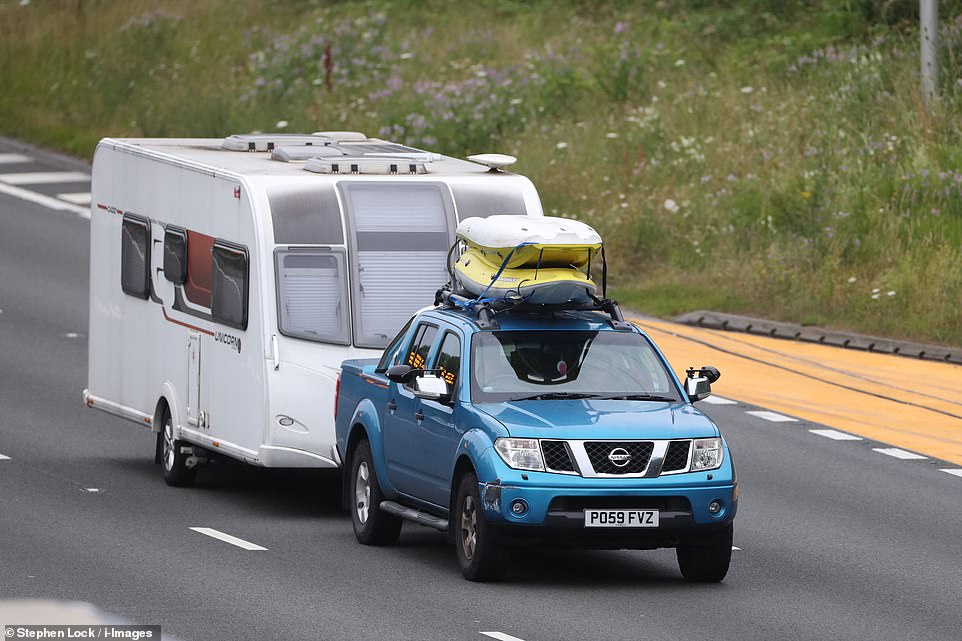 Traffic on the M25 motorway in Kent early this morning as hotels, restaurants and hotels re-open with people being able to stay overnight or longer in England as part of the next stage of the coronavirus lockdown easing 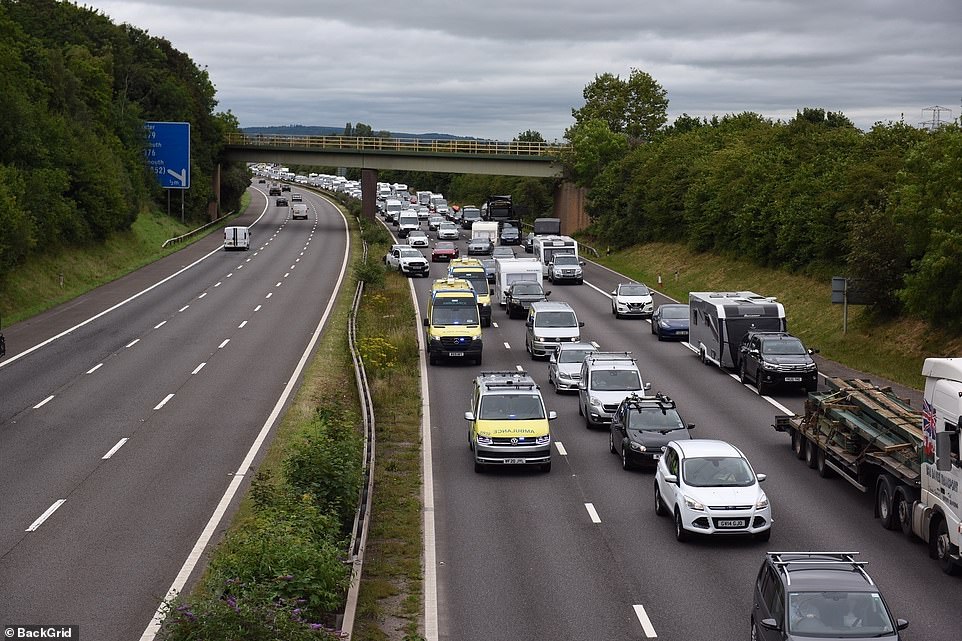 There were also multiple reports of accidents on the M5 involving holiday traffic, with the Exeter-based HART ambulance team seen heading southbound towards Junction 31

James Taylor, General Manager at Zipcar said: ‘Since the most stringent lockdown restrictions eased from 1st June, we’ve already seen a 36% increase in reservations for our Roundtrip service.

‘The British public are clearly keen to get on the road and domestic travel will play a vital part in boosting the economy.’

Plymouth and the Isle of Wight are set to be two of the UK’s big winners from the boom in staycations amid the coronavirus pandemic, while visits from foreign travellers continue to dry up.

New research from Colliers International has revealed that the hotel sector in Plymouth is expected to recover at a faster rate than any other in the UK as holidaymakers flock to the South West.

But it said that some traditional tourist hotspots, such as London, will be hard hit by the dearth of visitors from abroad due to travel restrictions.

Colliers’ inaugural Covid-19 Recovery Hotels Index also said that a strong rebound in domestic tourism was particularly likely to help the economy of the Isle of Wight. 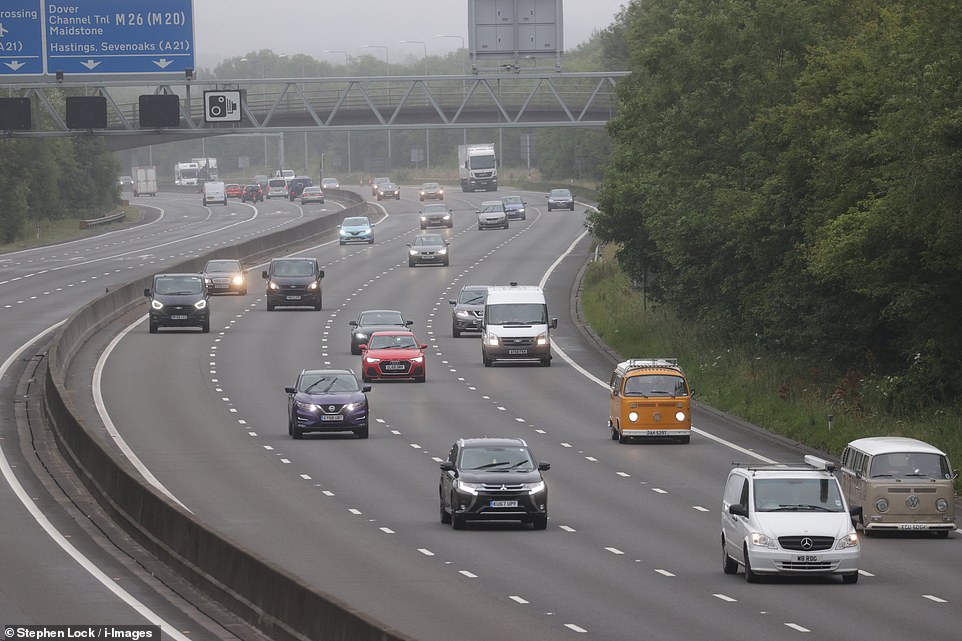 Traffic on the M25 motorway in Kent this morning as ‘Super Saturday’ gets underway, with booking websites reporting an increase in traffic as holidaymakers looking to make their getaway within the UK 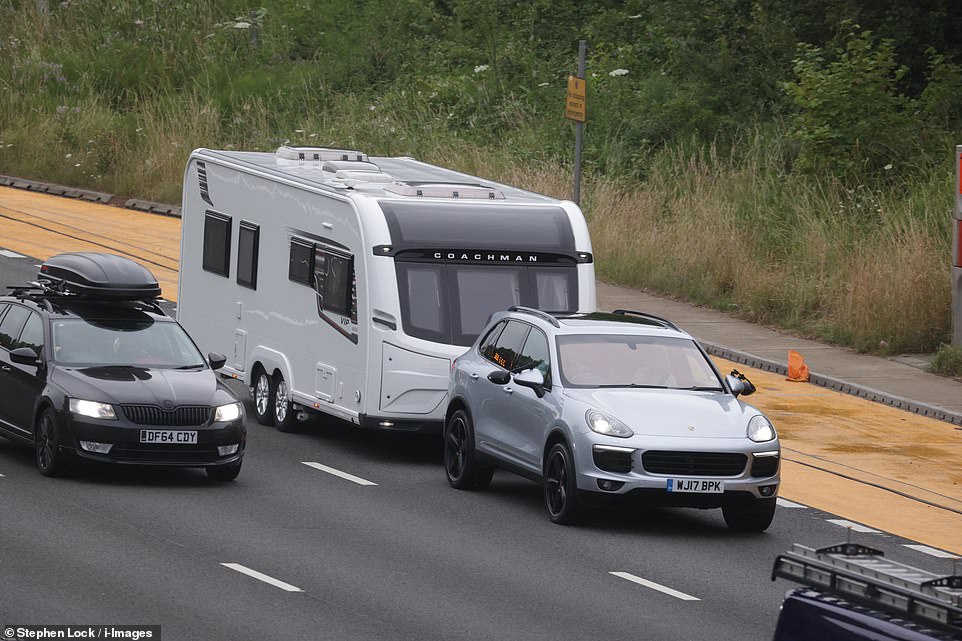 Traffic on the M25 motorway in Kent with one car pictured towing a camper van. Approximately 6.5million Britons are planning overnight stays with friends or family, with around two million driving to campsites

Exeter, Norwich, Blackpool and Cornwall are also expected to recover more quickly, according to experts at the commercial real estate specialists.

Marc Finney, head of hotels and resort consulting at Colliers, believes that UK leisure destinations are less likely to feel a large impact from dwindling overseas visitors and large events.

‘So good news in the short-term for traditional British seaside resorts such as Blackpool and Bournemouth, national park locations and Devon and Cornwall,’ he said.

‘This said, some of these markets within the top 10 have traditionally been very small – so even though they appear top of the list, the uptick will be small in absolute terms.’

The research said that Plymouth topped the index as 86 per cent of its visitors are domestic tourists, while it also believes its large proportion of budget hotels will make it more resilient to the financial impact of the current crisis. 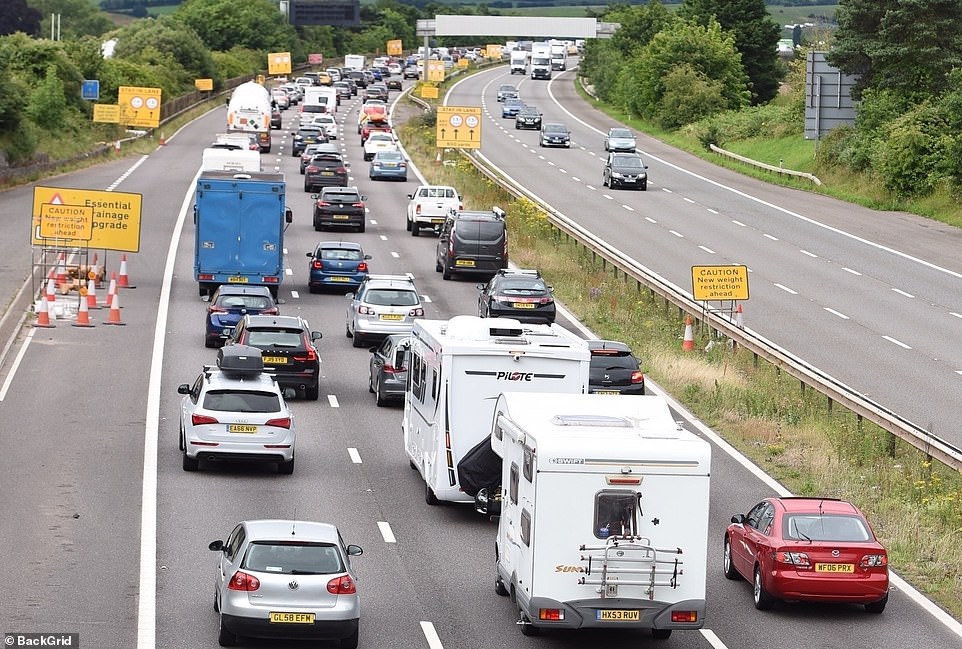 The M5 in Exeter, which was swamped with camper vans and caravans heading to the coast this morning as tourists getaway as hotels, restaurants and pubs re-open with people being able to stay overnight or longer in England 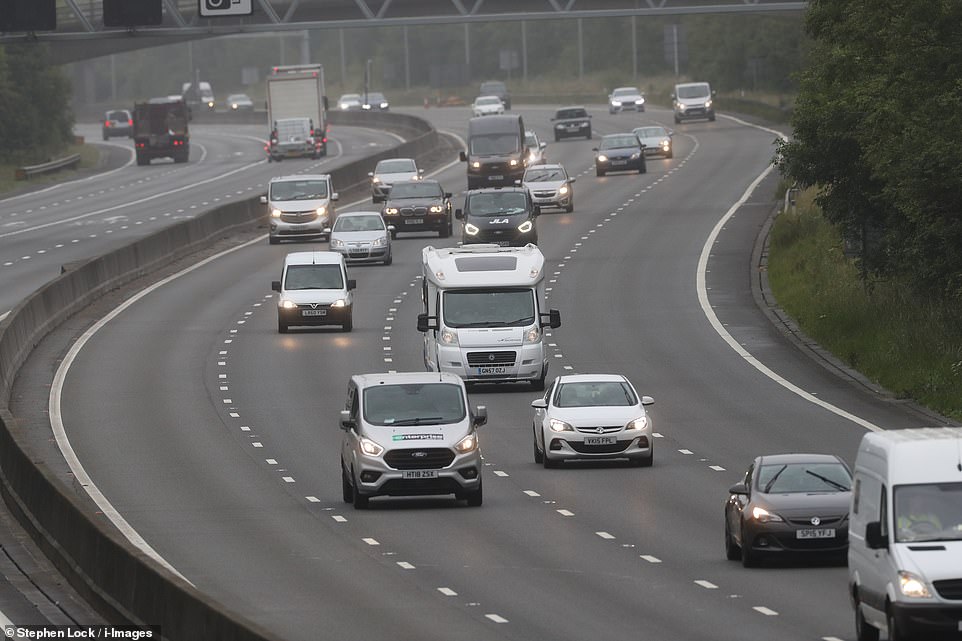 Traffic on the M25 motorway in Kent as ‘Super Saturday’ gets underway. It comes as booking websites report an increase in traffic, with Booking.com seeing a ‘spike’ in searches for domestic properties

Visit Cornwall chief executive Malcolm Bell warned people to book ahead as bookings rise ‘across the board’ for the region, with web traffic for the site increasing by 20 per cent from the same time last year.

Meanwhile, the Isle of Wight is also expected to benefit from a significant number of UK tourists, with domestic tourists visiting the area for leisure typically representing around 90 per cent of visits.

Mr Finney also said that hotels which focus on their rooms could outperform sites which typically secure more revenue through other services, such as gyms and spas.

He added: ‘This is due to social distancing protocols which will inevitably limit the use of public areas and ancillary facilities in the short-term, including restaurants, bars, meetings spaces and spa amenities.’

Meanwhile, typical tourist hotspots London, Oxford and Cambridge take the three bottom spots in the ranking of 35 destinations, as they look set to miss out on their normal level of foreign tourists.

Colliers also stressed that the cancellation of major events, such as Wimbledon, as well as vast numbers of conferences and exhibitions, would particularly impact the capital’s hotel sector.