Billionaire oil tycoon J Paul Getty’s grandson has withdrawn plans to put up 6-ft fencing and electronic gates along a cherished public footpath near his home.

But his plans faced opposition from councils, charities, the public, and campaign groups – including Britain’s oldest national conservation body.

They argued the plans would make ‘the whole area appear private, threatening and urban’, spoil the view and force people to walk in single file.

John Paul Getty’s grandson Tara Getty, 50, has withdrawn plans to divert the bridleway that runs by his house, pictured from the public footpath, in the Chilterns 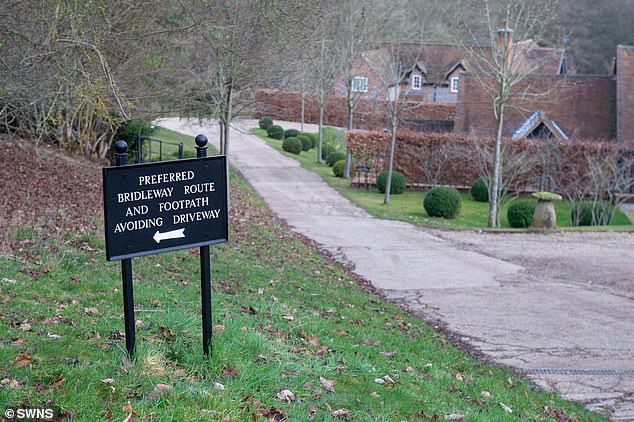 Signs, pictured, in the area ask visitors to use a preferred route that arcs away from his house

Agents for Mr Getty, an ecological conservationist and company director, withdrew the plans before they could be approved or rejected by Wycombe District Council.

Mr Getty’s grandfather was once the richest man in the world. He was held at ransom over Tara’s half-brother, who was kidnapped in Rome in 1973 and had his ear cut off.

Kate Ashbrook, general secretary of the Open Spaces Society, said: ‘We are delighted that Mr Getty has withdrawn his obnoxious application. 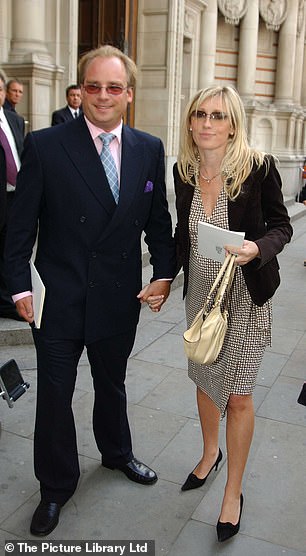 Tara Getty, pictured with his wife, withdrawn plans to put up 6-ft fencing and electronic gates at his Buckinghamshire estate

‘This is a beautiful, quiet valley in an area of immense beauty, and the fencing with electronically-controlled gates would make the whole area appear private, threatening and urban.

‘Erecting deer fencing would be an eyesore especially for users of the bridleway which is an attractive and open route with a wide path.

‘Already the owner has erected discouraging notices about CCTV but the fencing would make this situation worse.’

Currently walkers, cyclists and horse riders can freely use the right of way, which crosses his driveway in Ibstone.

But there are signs warning there are CCTV cameras, and asking visitors to use a ‘preferred route’ – a longer path that arcs away from his house.

Mr Getty submitted plans to the council in November asking for permission to very slightly divert the path at two points and put up deer-proof fencing.

It is understood the metal fencing would only be installed on small sections of the footpath, which would still be a public right of way.

Objectors said it would narrow the path, make it look private, and make users go along parts of the path in single file, according to council documents. 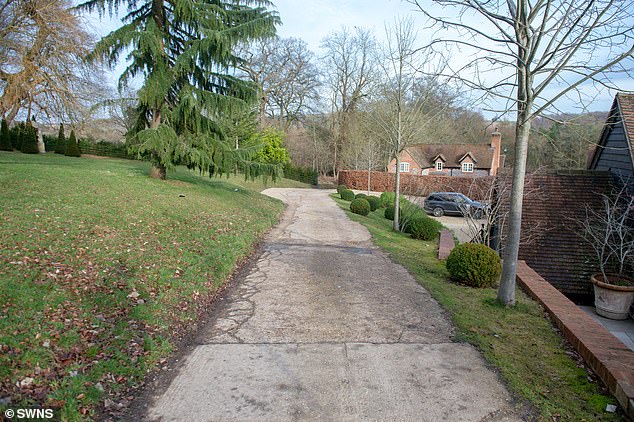 The path, pictured, runs very close to the house and campaigners said putting up metal fencing would narrow the way and make users go along parts of the path in single file

In his objection, Johnathan Clark, strategic access officer at Buckinghamshire County Council said: ‘Having seen the bridleway route, I am of the opinion that such gates would be a net loss in public amenity as walkers, cyclists, and horseriders, travelling in pairs would be forced to align in single file twice within a short distance, which is inconvenient.

‘In addition, it would add to the impression that the area is private, discouraging public use and further encouraging use of the alternative route already deemed inconvenient.’

Dr Lucy Murfett from the Chilterns Conservation Board, added: ‘Two sets of electric gates and high fencing will impact on the enjoyment of the walk through Ibstone.

‘As well as visitors to the area, it will impact on the use by local communities for walking and enjoyment outdoors, especially as it is near to the village primary school. 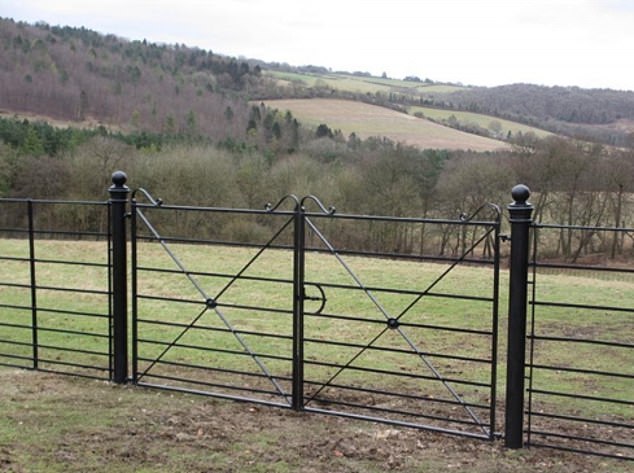 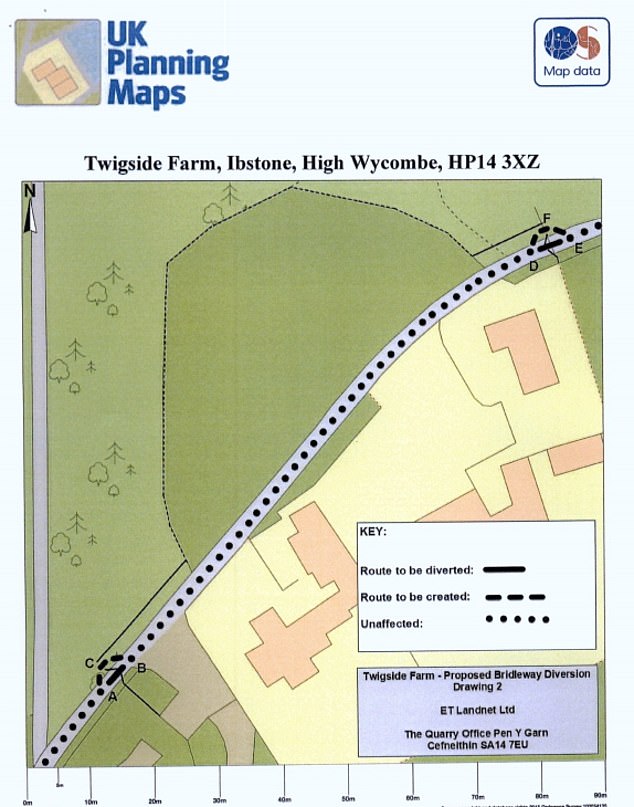 ‘We do not welcome high fencing through woodland and beautiful valleys, since it blocks views and stops wildlife moving in a natural way through the landscape.

‘Security fencing and gates designed like this are visually intrusive and urbanising features. They make areas feel exclusive, and the public feel excluded.’

It is believed that in past planning applications Mr Getty’s representatives had complained about how closely the route runs to the farm, with one person reportedly even being able to see into the living room and watch TV.

It was said that some people had stopped to take photographs of the properties at Twigside Farm which include a gym and games room, reports the Telegraph.

According to the planning portal, the application was withdrawn on Wednesday January 16.

A planning representative for Mr Getty said he had been instructed by the family not to comment on the reasons for the withdrawal of the application. He said no new application would be submitted. 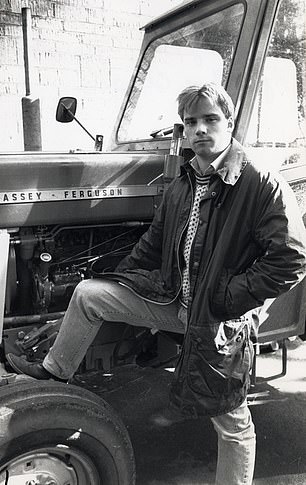 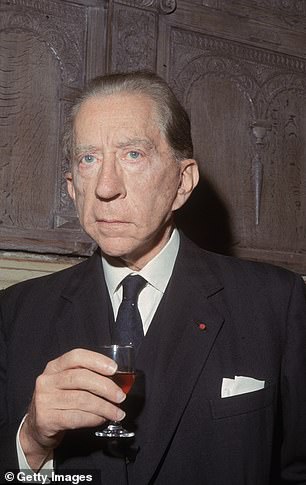 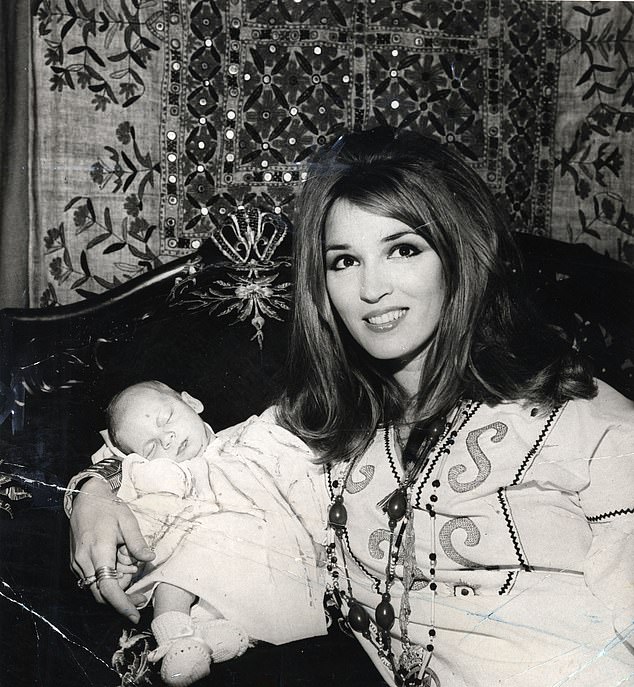 His mother Talitha died of a heroin overdose in July 1971 and his father Paul moved to London, where he made philanthropic donations to British institutions, reports Tatler.

In 2001 the Telegraph reported that Tara Getty and his wife Jessica had welcomed a baby boy called Orlando Willem Pol, named partly after Talitha whose maiden name was Pol.