Girl, 11, has a 5mm bead removed from her ear that was there for 9 YEARS

Doctors have pulled out a tiny bead from an 11-year-old’s ear – after they dismissed it as wax for nine years.

The girl, whose name is unknown, had repeatedly shown signs of discomfort and tinnitus since she was two.

But each time her mother took her to the doctors they claimed her symptoms were due to a build-up of ear wax, or cerumen.

It was only when the girl was on holiday in Bali, known as the ‘Island of Gods’, that the 5mm bead was spotted by Indonesian specialists.

Her mother sought medical advice during the trip – a 16-hour plane journey from Britain – after she showed signs of tonsillitis.

A full ear, nose and throat examination revealed a ‘wax-coloured bead’ was in her auditory canal.

The girl had the object removed at Brighton and Sussex University Hospitals NHS Trust when she returned to Britain.

Doctors wrote in the BMJ Case Reports: ‘On reflection, the child’s mother recalled witnessing the child placing the bead in her ear at the age of 2.’

‘She had seen multiple primary care doctors and repeatedly been diagnosed with unilaterally impacted wax,’ the experts added.

The tale, published in the prestigious medical journal, has led to warnings that the girl was lucky to escape without any harm. 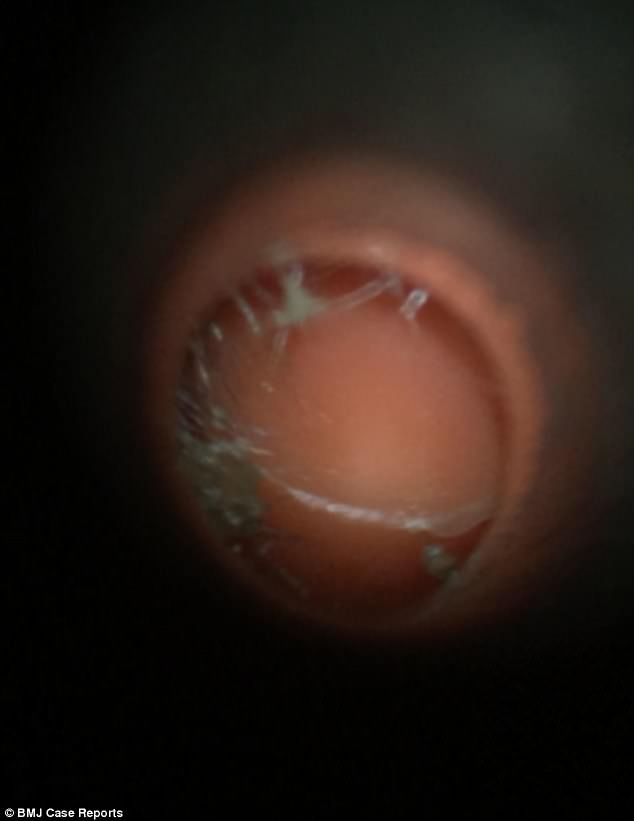 The girl, whose name is unknown, had repeatedly shown signs of discomfort and tinnitus since she was two (pictured: the bead in her ear, which doctors thought was wax)

Earwax usually falls out on its own, however, in some cases it can become blocked.

It cannot be prevented as the wax is there to protect ears from dirt and germs.

Using ear drops softens wax, which helps it to fall out and prevents blockages.

You are more likely to suffer if:

These usually improve when the wax is removed, which occurs via using drops, or having the wax flushed or sucked out at a GP surgery.

Medics, led by Dr Thomas Geyton, wrote: ‘Fortunately, due to the inert nature of this foreign body no lasting damage was caused.

‘Organic foreign bodies may cause significant inflammation through activation of the immune system.

‘A button battery in the ear canal may cause permanent damage through electrolysis and hydroxide formation.’

The new case comes after health officials declared in November that cotton buds should not be used to clean ears.

Inserting a bud could damage the ear and push wax further down, according to the National Institute for Health and Care Excellence.

The draft guidance also said ear syringing, in which a metal syringe is used to pump water manually into the ear to clear out wax, is potentially harmful.

Committee members agreed that buds may be a ‘hazard’ that can cause infections or push wax further into the ear canal.

The guideline said the ear canal is ‘self-cleaning’, with excess wax falling out on its own, and that the entrance to the ears can be cleaned with a damp flannel.