A 15-year-old girl who was wounded in a Texas high school shooting on Monday is said to be ‘in good spirits,’ and her 16-year-old classmate suspected of opening fire on the teen after a string of prior violent incidents at school has been charged as a juvenile with aggravated assault.

School District superintendent Lee Joffre told reporters outside Italy High School on Tuesday that he visited the girl at Parkland Memorial Hospital in Dallas, where she read him a poem and cracked jokes.

‘It is an amazing demonstration of her strength that she was able to survive this,’ he said of the girl, whom family members have identified as Noelle ‘Cricket’ Jones.’ 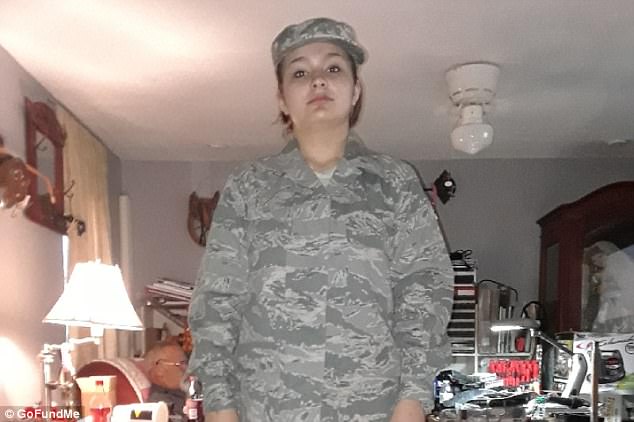 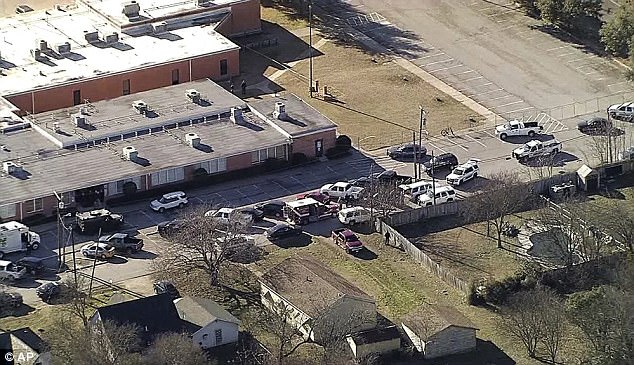 The teenage boy who was arrested not long after the shooting in the cafeteria at Italy High School shortly before 8am on Monday was meanwhile charged with two counts of aggravated assault with a deadly weapon, the Ellis County district attorney’s office announced Tuesday.

A preliminary hearing in juvenile court is scheduled for Wednesday. He was being held at a juvenile detention center.

Police have not released the suspect’s name and Italy police Chief Michael Taylor did not respond to a request for comment.

According to the description of a GoFundMe campaign launched on behalf of the victim’s family to help them with her medical expenses, the 15-year-old has had one bullet removed from her abdomen, along with ‘a foot of unrepairable small intestine,’ and she still has another bullet lodged in her neck.

The campaign, which has drawn under $8,500 in donations, also says that Noelle will have to undergo multiple surgeries, followed by an extended period of physical rehabilitation.

‘This is every parent’s worst nightmare, and we feel the Jones’ family should not have to worry about the financial burden of this horrendous situation,especially [sic] since they are self employed small business owners,’ the page reads. 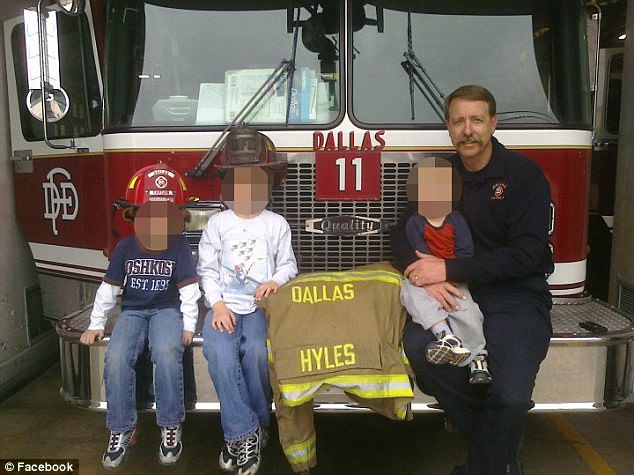 Off-duty Dallas Fire-Rescue Capt Charles Hyles has been credited with helping save Noelle’s life in the harrowing minutes after the shooting.

Hyles recounted to NBC5 that as he was trying to pinpoint the sites of Noelle’s injuries, the 15-year-old girl begged him, ‘I don’t want to die. Don’t let me die.’

The veteran firefighter, who has three children of his own, described Jones as ‘the strongest little girl I’ve ever met.’

He added, ‘Twenty-nine years of doing this, and of all the patients, she might have been the toughest.’

He carried Jones into the helicopter, planted a kiss on her head and assured her that he would meet her at the hospital in Dallas.

When Hyles later came by to check on Jones in the hospital, she broke down in tears, telling him, ‘You didn’t let me die.’

Noelle’s father, TJ Jones, spoke to the station WFAA on Tuesday, saying that his daughter is new to Italy High School and is a member of the ROTC. Monday would have been her first drill with Civil Air Patrol and she was excited to wear her uniform to school.

Jones, who works as a locksmith, also said that the 16-year-old suspect had been to his home several times and he did not notice anything amiss about him.

But according to other members of the Italy community, the teenage boy had a known history of violent behavior towards his classmates.

Cassie Shook, a 17-year-old junior at the school, earlier told The Associated Press that she was driving up to the cafeteria Monday when she saw ‘the doors fly open and everyone screaming and running out of the building.’ She said she was angry when she learned who the suspect was because she had complained about him at least twice to school officials, including to a vice principal. 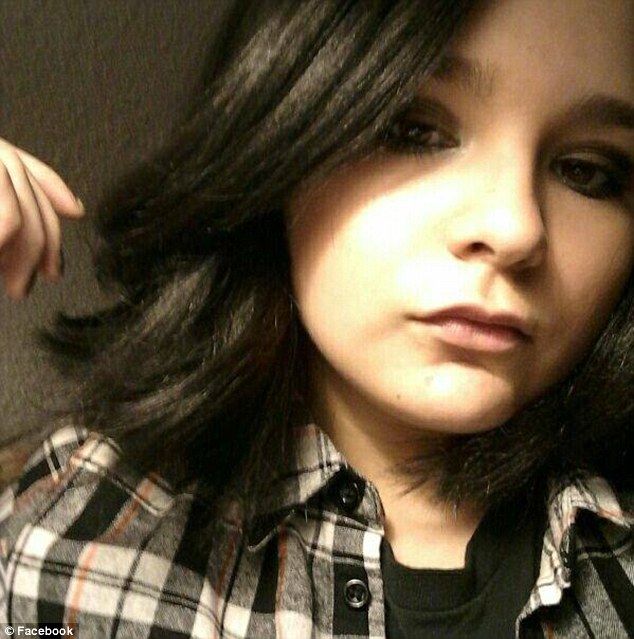 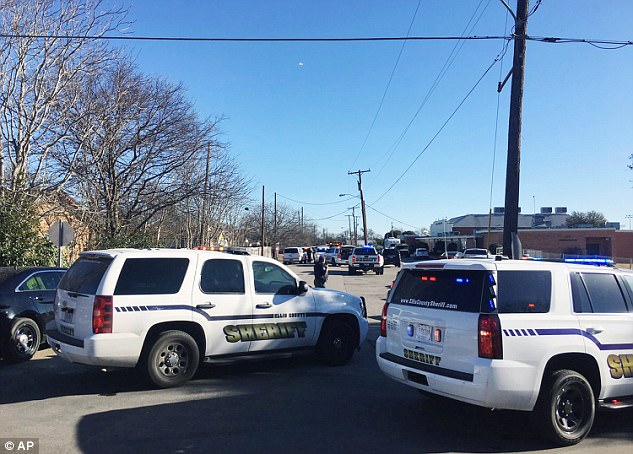 ‘This could have been avoidable,’ she said. ‘There were so many signs.’

Shook said when she and the boy were in eighth grade, the teen made a ‘hit list’ that included her name on it.

Then last year, the suspect picked up a computer and hurled it against a wall, prompting his temporary removal from the school.

Tina Haight, whose daughter attends the school, told KDFW-TV in Dallas that she had complained to school administrators after the same boy threw scissors at her daughter in anger.

Joffre said Tuesday that he couldn’t comment on disciplinary actions involving students, but that the school district adheres to regulations established by the Texas Education Agency.

‘I have confidence that our administration always addresses the Texas education code appropriately,’ he said. 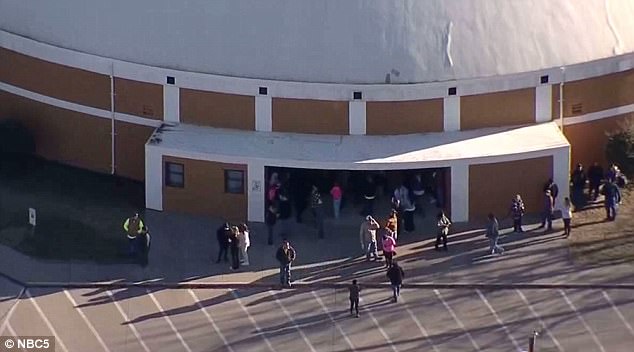 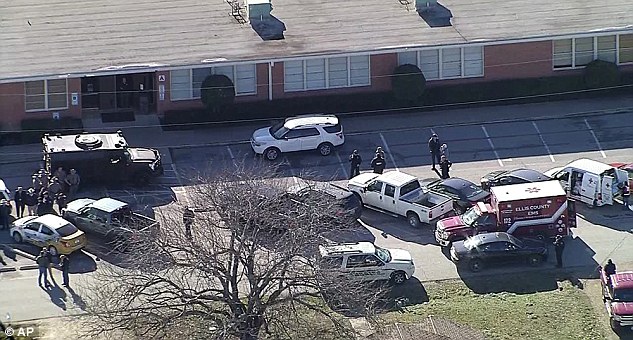 Shook said Noelle Jones had briefly dated the suspect, but the girl’s dad told WFAA as far as he knows, the two were just friends.

Ellis County sheriff’s Sgt. Joe Fitzgerald said authorities would inquire about any dating history involving the two as part of the investigation.

Fitzgerald said officials know where the suspect obtained the .380 semi-automatic handgun used in the shooting but he declined to publicly reveal that information.

Agents with the federal Bureau of Alcohol, Tobacco, Firearms and Explosives searched the school for weapons and explosive devices before students arrived Tuesday. Joffre said law enforcement officers would be on campus through the day.

‘It was an extra assurance for us to be ready for our students today,’ he said.