Girl with DIPG brain tumour is one of longest UK survivors

A schoolgirl with an incurable brain tumour whose family moved to Mexico to spend £350,000 on alternative treatment they found online has become one of the longest-surviving UK cases ever known.

Her family from Woodford Green, Essex, was left devastated in January when NHS and private doctors in London told them her tumour had spread and there was nothing more they could do.

Desperate to save their ‘bundle of joy’, her parents Scott and Yang scoured the Internet for alternatives – and eventually decided to risk it all on one pioneering treatment centre in Monterrey, Mexico. 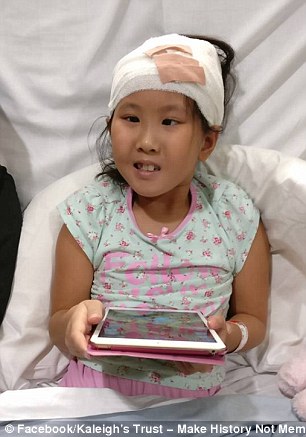 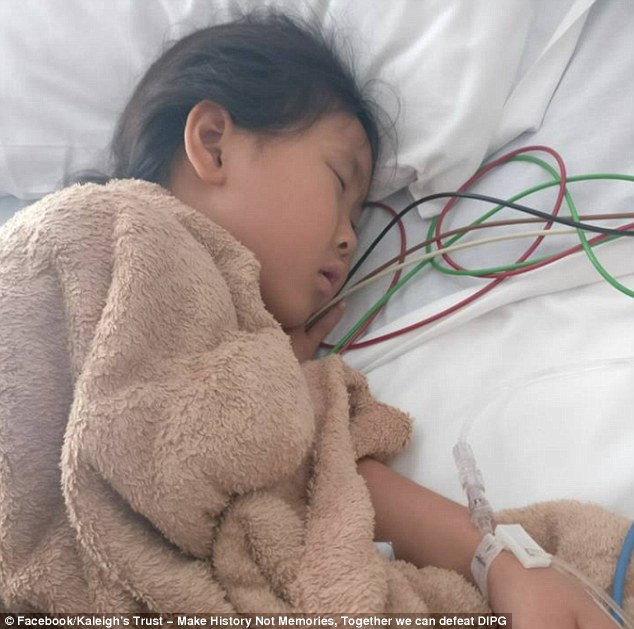 After UK doctors said there was no more they could do, her parents Scott and Yang scoured the internet for alternatives, deciding to risk it all on one they found in Monterrey, Mexico . Kaleigh is pictured during one of her rounds of treatment at the Hospitales Angeles

Despite knowing ‘very little about it’ they dropped everything and jetted off, with Kaleigh’s mobility and vision already deteriorating fast.

But almost a year later she is still fighting and her father still crowdfunding for the £350,000 the experimental drugs will eventually cost.

Mr Lau, 41, told MailOnline: ‘When we first went I was very skeptical. But as a father I had to take that risk and keep that hope.

What is Diffuse Intrinsic Pontine Glioma?

It affects between 20 and 30 children every year in the UK, who survive less than a year on average after diagnosis.

The tumour tends to grow quickly and is more likely to spread to other parts of the brain or spinal cord.

DIPGs originate in an area of the brain, and more specifically the brainstem, called the pons.

The pons is an area deep within the lower part of the brain which is responsible for a number of critical bodily functions, such as breathing, sleeping and blood pressure.

Standard treatment involves palliative radiotherapy, but surgery is rarely an option because of its position in the brain.

‘If it was a scam it was a scam, but we had to do something. If we didn’t like what we heard when we got there we could just turn around and come home again.

‘But the doctors there are fantastic – the NHS would have given up on her ages ago, but they won’t turn away, they’re not afraid to keep trying.

‘Put bluntly, the assumption is ‘this child is going to die’ so their attitude is, as long as its ethical, why not think outside the box if there’s a hope of saving them.’

Just a week after flying out to the Hospitales Angeles in Monterrey for the first round of intra-arterial and immunotherapy, Kaleigh started to show signs of improvement.

Mr Lau added: ‘It was about seven days after the first treatment when the power in her left hand was returning and her walking was getting better.

‘Then it was the hopping and the monkey bars – truly a miracle.’

Following a three-month stay in April, the Laus have made five further trips to Mexico, with Kaleigh currently on her 11th round of treatment.

Travelling back and forth every four to six weeks, which they plan to continue doing throughout 2018, will eventually have cost them £350,000, and is taking a financial and emotional toll.

Tireless fundraising and celebrity endorsements, including ones from J K Rowling, Simon Cowell, Olly Murs and Jeremy Corbyn, have seen them raise £221,000 so far. 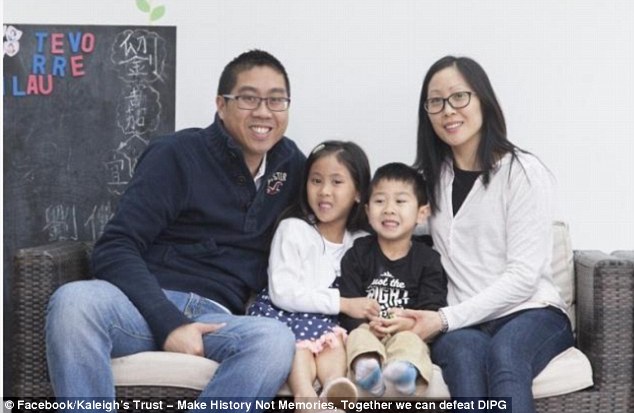 Despite knowing ‘very little about it’ Scott (left), Kaleigh (second left, pictured before her illness, Carson, five, and Yang (right) dropped everything and jetted off, with Kaleigh’s mobility and vision already deteriorating fast 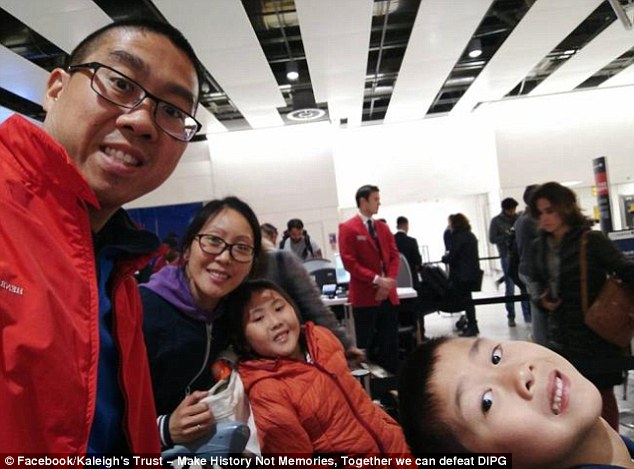 Travelling back and forth every four to six weeks, which they plan to continue doing throughout 2018, will eventually have cost the family (pictured) £350,000, and is taking a financial and emotional toll 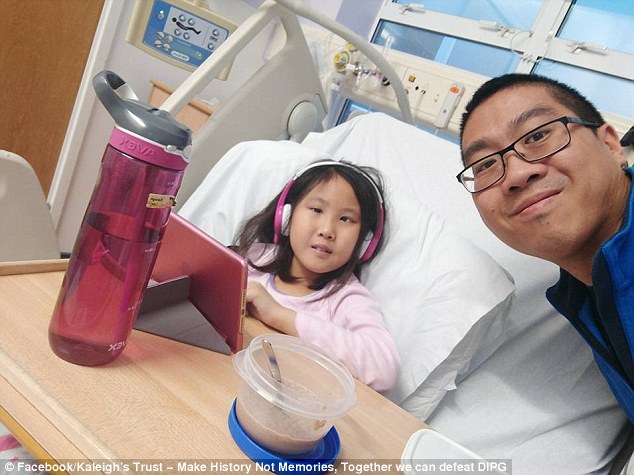 Little Kaleigh is pictured with her father Scott, 41, who has been tirelessly fundraising for her alternative treatment

But her father, a construction manager, has been forced to stay in the UK while the rest of the family go back to Mexico so he can work and promote more crowdfunding.

Also, although the tumour in the pons area of the youngster’s brain has reduced with the experimental drugs, swelling in the cerebellum is now causing problems – which could prove just as deadly.

Mr Lau said: ‘Until September things were going really well, the tumour had reduced and she’d pretty much returned to being a normal child.

‘But because Kaleigh is on the front line, this is unknown territory for the doctors.

‘Now DIPG patients like her are living longer, there are more issues cropping up along the way.

‘The problem we’ve got now is just as life-threatening. The swelling is putting pressure on her nerves, which has put her in a wheelchair

‘You keep thinking ahead and asking yourself, ‘will she still be here?’ 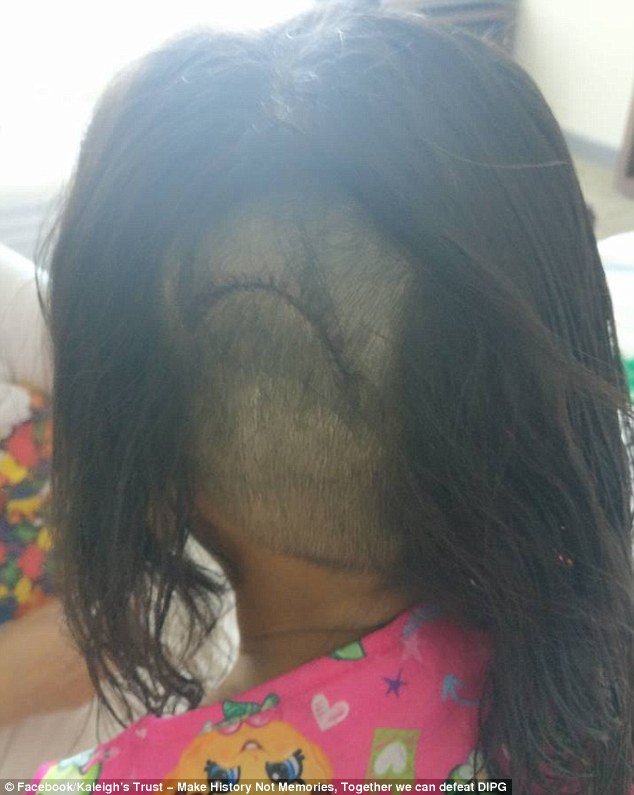 Kaleigh had to have had her head shaved after she had an operation at Great Ormond Street Hospital in London earlier this year. The procedure is intended to relieve pressure of excess fluid on her brain 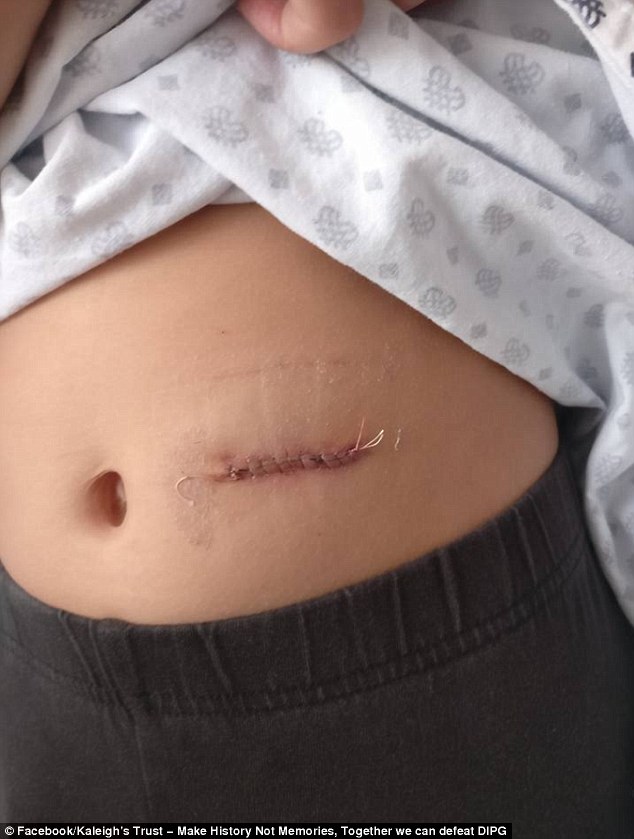 Physical and emotional scars: The Woodford Green youngster has had to undergo all sorts of procedures as part of her treatment both in Mexico and back home in the UK

The father-of-two feared he could have lost his daughter on one terrifying return flight from Mexico in September.

Despite doctors giving them the green light, the altitude during the eight-hour flight from the US to London proved too much for little Kaleigh, who started complaining of a headache.

Experts had warned this could mean the worst, leaving Mr Lau no option but to give her some medication and hope for the best.

He said: ‘I was in bits, I thought I might lose her.

‘I gave her steroids to stop any more swelling, but at that point all I could do was just pray and watch the seconds go by.

‘You don’t realise until you’re in the situation we’re in how serious this is.’

Thankfully they touched down safely, but faced more problems when Great Ormond Street Hospital delayed an operation to reduce excess fluid in Kaleigh’s brain because they had no beds. 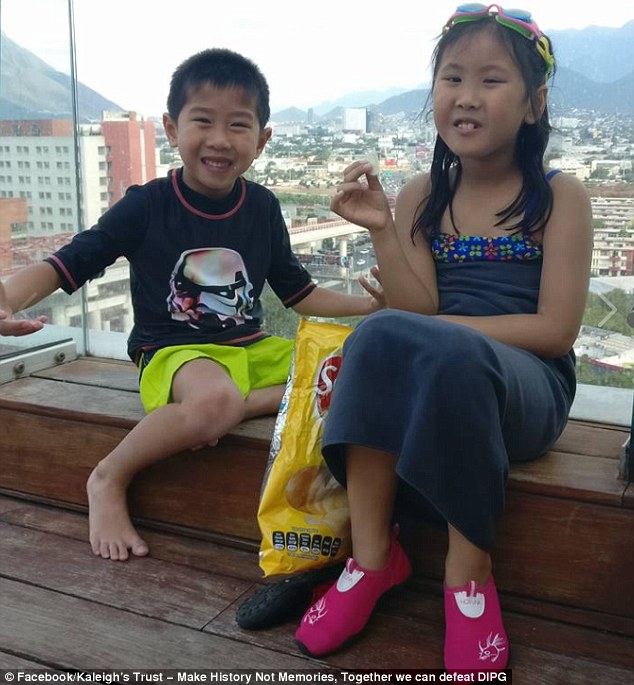 Kaleigh (right) is pictured with her little brother Carson (left), five, who has accompanied her on several of the family’s trips to Mexico. They are pictured enjoying the hotel pool 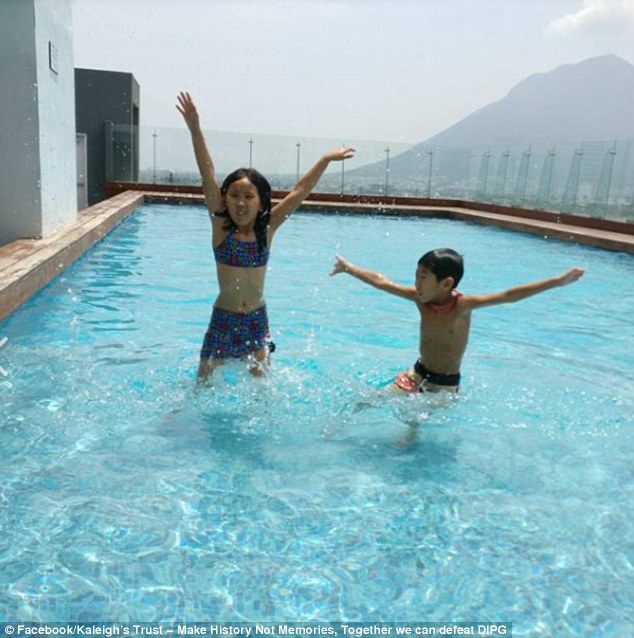 Just a few days after her first round of intra-arterial and immunotherapy in Mexico, Kaleigh went from slurred speech and limited mobility to splashing around in the pool (pictured) 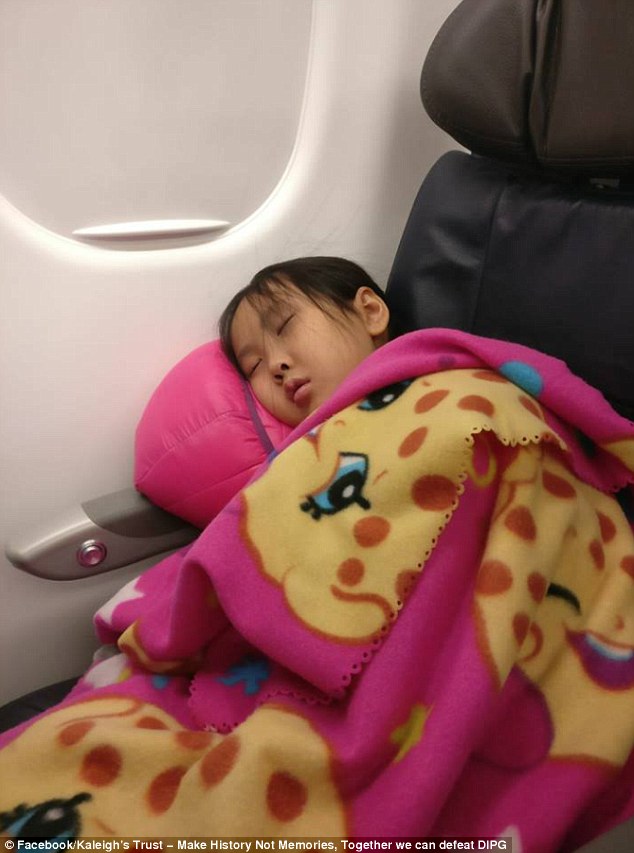 After an agonising wait, they had just enough time after the procedure to prepare for her October stint in Mexico.

And it’s not just Kaleigh her parents have to worry about – they are terrified she might loose one of her DIPG friends at the clinic too.

Mr Lau said: ‘All the parents keep in touch and it’s very tough when you hear someone else’s child has passed away.

‘Kaleigh hasn’t lost any of her close friends – I don’t know how we’d deal with that.

‘She knows she has a lump in her head but that’s it.

‘She still talks about her next birthday and what she’s going to do when she’s older and has her own kids.

‘I don’t know what we’d tell her if one of her friends died.’ 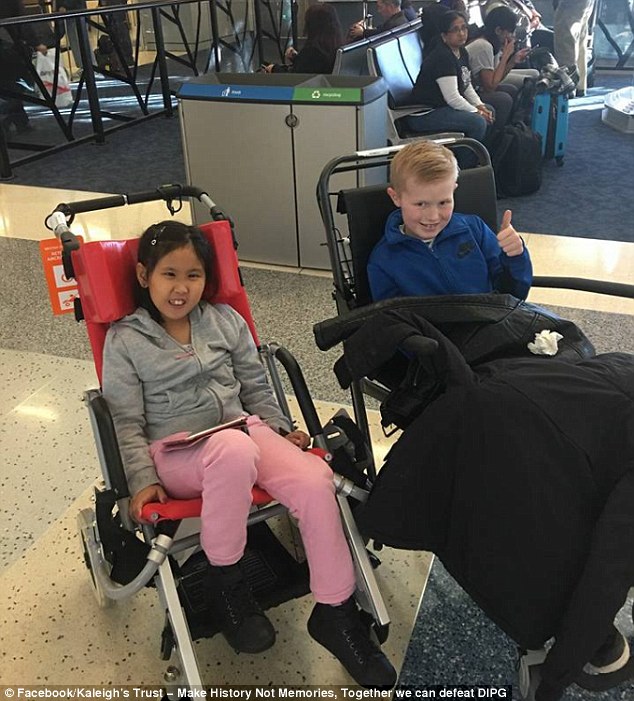 And it’s not just Kaleigh her parents have to worry about – they are terrified she might loose one of her DIPG friends at the clinic too. She is pictured with another DIPG patient, Luke

After one of the children at the clinic died this month, they wrote: ‘After the very recent loss of the beautiful Hadley whom we were fortunate enough to meet on several occasions on days out and hospital trips, it made me even more emotional to see the Lau girls return to UK soil safely.

‘This is a rollercoaster ride, but for Hadley there is no more pain. RIP baby girl, fly high and protect your family from above. You will never be forgotten.

‘I’m still lost for words and shocked of your loss.’

Speaking of the Lau’s emotional battle against their daughter’s rare condition, Sarah Lindsell, chief executive of The Brain Tumour Charity, said: ‘It is impossible for most of us to imagine what you go through when you are told there is no hope for your child. 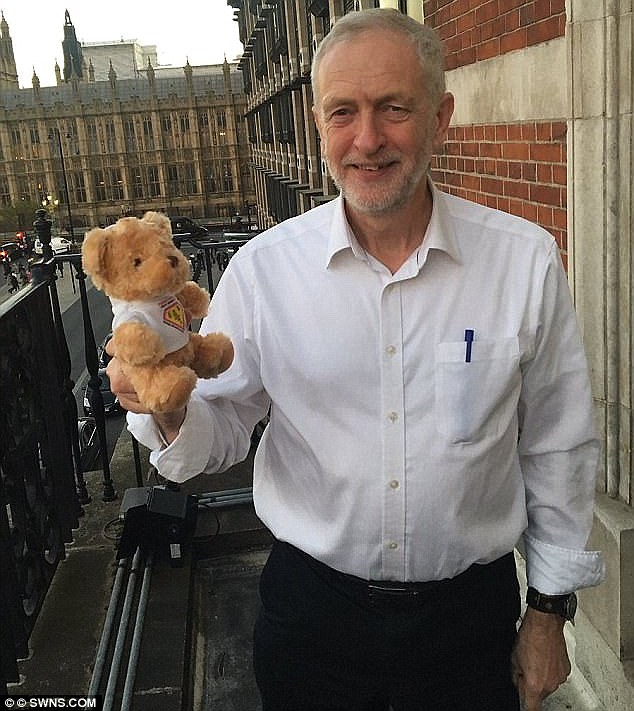 Tireless fundraising and celebrity endorsements, including ones from J K Rowling, Simon Cowell, Olly Murs and Jeremy Corbyn, have seen the Laus raise £221,000 towards Kaleigh’s treatment so far. Labour leader Mr Corbyn is pictured with a ‘Kaleigh bear’ to promote the campaign 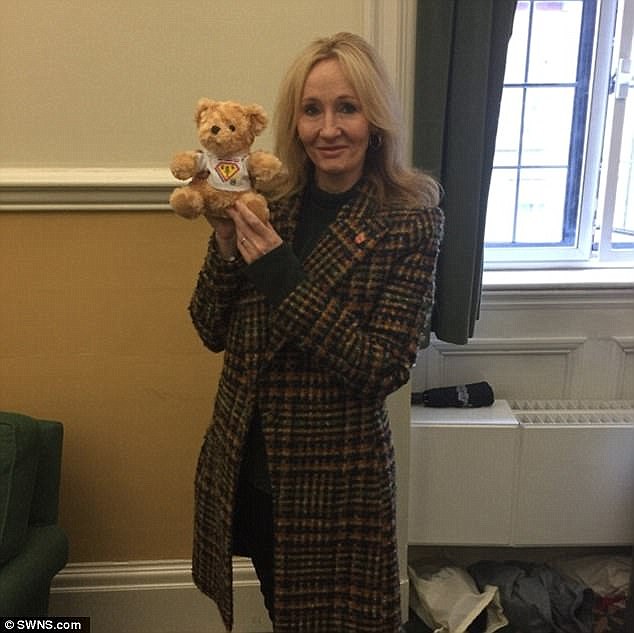 ‘The Laus’ decision to take Kaleigh to Mexico for experimental therapy is a powerful reminder of the lack of clinically proven, effective treatment options for young patients diagnosed with DIPG and the need for more research into the disease.

‘Children with DIPG survive for less than a year, on average, and only around one in ten survives for longer than two years.

‘We are delighted that Kaleigh appears to be responding positively to her treatment in Mexico and we would welcome the opportunity to learn more from the clinic’s medical team about the therapy regimes and progress of all of the children who are being treated there for DIPG.’

She added that the charity is funding DIPG research at Great Ormond Street Hospital, Oxford University and the Institute of Cancer Research.

Kaleigh is back at home with her parents and brother Carson for the festive period, where even the smallest injury or ailment can leave her extremely vulnerable.

But with the support of the Bradley Lowery Foundation, set up in memory of the six-year-old Sunderland fan who died of childhood cancer neuroblastoma, countless celebrity followers and local MP Wes Streeting, the Laus are determined to keep fighting.

Streeting, Labour MP for Ilford North said: ‘Kaleigh and her family have been incredibly brave in their fight against DIPG. It’s been a privilege to help them in some small way.

‘The campaign they have been running to raise funds for Kaleigh’s treatment is impressive, but also shows a real community spirit with friends and relatives but also strangers rallying round to support the cause.

‘I continue to raise this issue in Parliament and with Ministers to get better funding for research but also to make sure families like Kaleigh’s can get the support they need here in the UK.

‘If MailOnline readers could give what they can, it would mean the world to this family.’

Mr Lau added: ‘She’s been to hell and back more than once and she’s still going.

‘If she wants to fight I’m going to be there to fight with her and we’re going to stay positive until we can’t.’