Google Clips smart camera could spy on you, experts warn

Clips sits in the corner of the room and uses AI to identify familiar faces and determine the best time to capture a seven second video.

Google say it designed Clips to be an effortless way to capture intimate moments.

But some commentators have questioned the true price of this trade-off of convenience with our privacy.

Always-on cameras such as Clips can be used to ‘superpower surveillance’ in the future, according to experts.

Smart cameras like the newly released Google Clips could lead to ‘superpowered surveillance’ in the future. Google pitched Clips as a way to effortlessly capture intimate moments with your children and pets, sitting in the corner of a room blending into the background

Technology and culture writer Navneet Alang, based in Toronto, Canada, outlined his concerns over the gadgets in an in-depth commentary published by The Week.

The pocket-sized digital camera, which decides on its own whether an image is interesting enough to shoot, was launched on Tuesday.

Reviews of its performance have been mixed, but some experts are more worried about what it might lead to.

Even devices with seemingly innocent purposes can go on to become more more sinister, he says.

Mr Alang believes Clips is a test-bed for broader applications of ‘smart camera’ technology, including for spying on us.

Writing in his report, he said: ‘Cameras powered by AI will inevitably be used to superpower surveillance.

‘In an age in which facial recognition technology is already being used to apprehend criminals, a smarter camera from one of the world’s largest companies is something impossible to see as merely fun.

‘One must be careful not to dismiss what can seem silly now as it may end up being significant in the future.

Clips is currently only available to customers in the US, who can order it directly from Google.

Prices and release dates have not been announced for other countries, but Google has a history of releasing devices in the US first before rolling them out globally.

Mr Alang is not the first expert to suggest the prospect of Clips and similar devices leading to greater surveillance.

When it was first announced in October 2017, some questioned the wider implications of inviting the technology into our homes.

Speaking to VentureBeat at the time Dan Lohrmann, chief security officer at Security Mentor, said: ‘How will this AI know to filter private moments? What will the software find interesting?

‘Do people have a right to the content if these are used to record in public places? What happens if someone else says delete my video?

‘Remember that these can be used places where a human is not obviously controlling the camera directly.’

The $249 (£180) gadget is designed to clip onto furniture or other fixed objects, automatically capturing subjects that wander into its viewfinder.

But unlike some trail or security cameras that are triggered by motion or programmed on timers, Clips is more discerning. 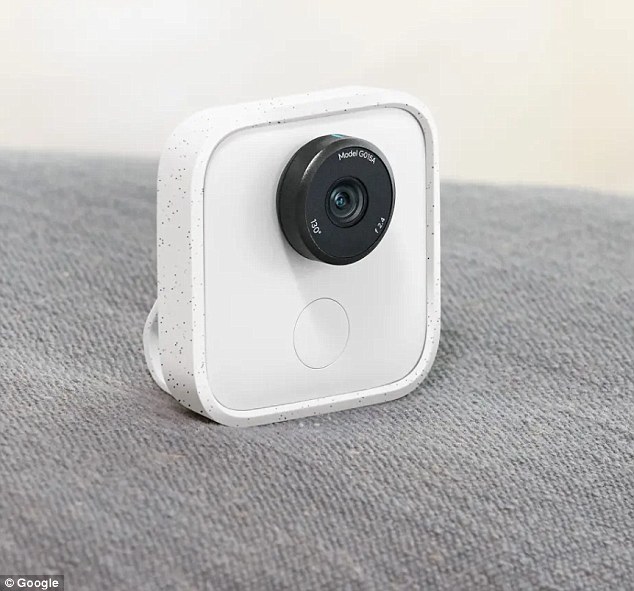 Measuring two inches by two inches (five cm by five cm) and weighing two ounces (56 grams), Clips can be hung from a drawer handle or a tree branch at the playground. Payne said the gadget is not meant to be worn

The company sees big potential with parents and pet owners looking to grab candid shots of kids and animals.

The Clip shoots seven-second videos, without audio, that can be edited into GIFs or high-definition photos.

These images can then be downloaded and shared via smartphone.

But Google’s bigger ambition is the mastery – and commercialization – of artificial intelligence, an area where it is investing big.

WHAT IS GOOGLE’S NEW ‘CLIPS’ AI-CAMERA? 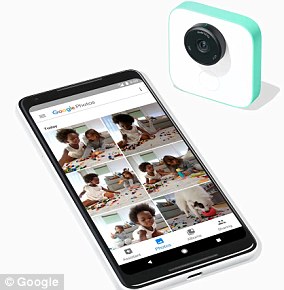 Google Clip shoots seven-second videos, without audio, that can be edited into GIFs or high-definition photos

Google has revealed a $249 hands-free camera that will automatically take photos and video for people looking to catch candid moments of their family, friends and pets.

The small, square device, called Google Clips, can be attached to something stationary so it can capture images of everything within its range of view.

It will rely on artificiall intelligence to know the best times to snap a photo or record video.

The lightweight, hands-free camera can be set on the coffee table or clipped to a chair to get a shot of your cat playing with its favorite toy.

There’s also a shutter button—both on the camera and in the corresponding app—so you can capture other moments or subjects, whatever you please.

When you turn it on, the camera looks for good moments to capture.

Clips looks for stable, clear shots of people you know.

You can help the camera learn who is important to you so when grandma comes in town, you’ll capture the grand entrance.

Google executives say success requires tight integration between hardware and software, which is why the search-engine giant keeps plugging away at consumer electronics.

The company has yet to dominate with its devices, though its Google Home smart speakers, Chromecast TV dongles and Pixel smartphones have all won high marks from consumers.

Each new gadget wires customers more deeply into its suite of services, which will be essential as Google competes with Apple Inc, Amazon.com Inc and Facebook Inc to be a primary hub for entertainment and shopping.

Google is sharpening its focus with each effort. With its Clips smart camera, the company is trying to hook shutterbugs with a soft introduction to artificial intelligence.

‘Being able to have cameras identify what´s happening in the home, without having to filter through recordings, this is where the market for video in the home is moving,’ said Blake Kozak, principal analyst at IHS Markit.

Some analysts are dubious that Clips will be a blockbuster in a marketplace crowded with digital cameras.

Its price could prove too high to justify its narrow uses. Alternatives such as pet camera Petcube, for example, provide more functionality, including remote monitoring. 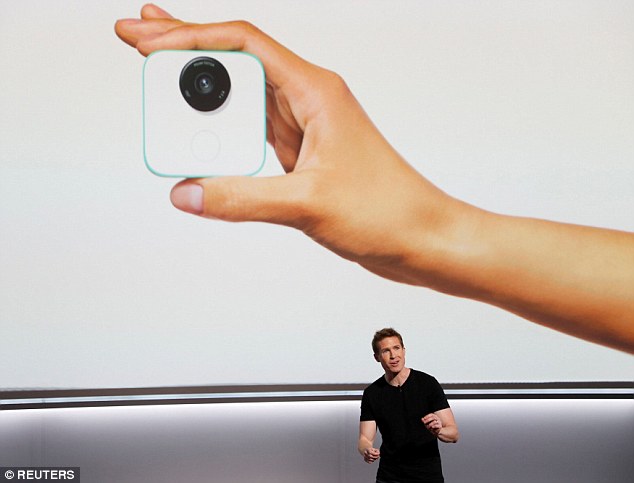 Alphabet Inc’s Google is betting this combination proves irresistible with the Tuesday launch of Google Clips, a pocket-sized digital camera that decides on its own whether an image is interesting enough to shoot. It was first unveiled at a launch event in Fall 2017

But the device is nonetheless an important demonstration of Google´s advances in computer vision, a form of artificial intelligence focused on identifying objects, according to Cyril Ebersweiler, founder of the hardware business incubator HAX.

‘The next thing after sound will be computer vision, and they can’t allow not to be doing something,’ Ebersweiler said.

Google says Clips, which was announced in October, is the outgrowth of years of research into what people like about their favorite images.

But casual photographers often cannot whip out their phones in time to catch the action.

And many subjects become self-conscious when they know a camera is pointed their way.

‘There is gold in between the photos you take’ with smartphones, Juston Payne, product lead for Google Clips, told reporters this month. 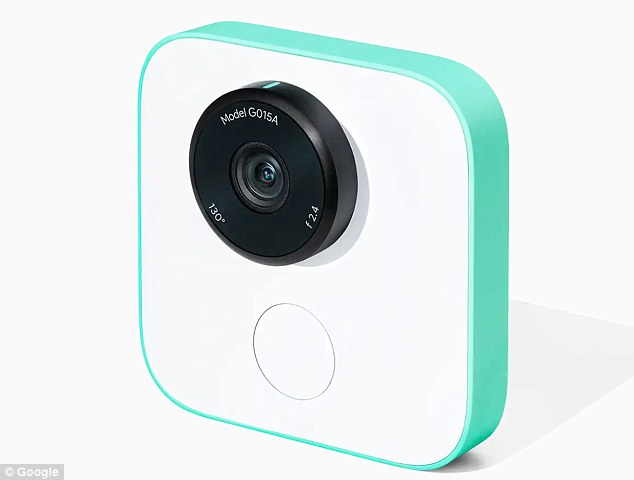 The company sees big potential with parents and pet owners looking to grab candid shots of kids and animals. The images can be downloaded and shared via smartphone

‘This camera gets at those moments.’

Payne said his team had no mandate to develop a stand-alone camera. They could have packed more software into smartphone cameras, for instance.

But he said a dedicated device that could fade into the background proved to be the best solution for naturalistic photography.

Measuring two inches by two inches (five cm by five cm) and weighing two ounces (56 grams), Clips can be hung from a drawer handle or a tree branch at the playground. Payne said the gadget is not meant to be worn.

The camera captures the best shots when subjects are about three feet away and in its frame. It operates three hours on a charge.

Clips is being sold at Best Buy and Verizon retail outlets as well as Google’s online store.

Google says it attempted to address privacy concerns by placing white lights on Clips to alert subjects when the camera is filming. It also intentionally avoided giving the camera a direct connection to the cloud.

The device’s lack of sound may disappoint consumers, but Payne said audio would have encouraged people to film themselves while skydiving or skiing, pursuits the gadget’s auto-capture technology is not yet capable of handling.

Michael Kim, a product design consultant at Kim Advisory Capital, said Clips could be convenient as an ‘ambient photographer.’

But he questioned whether such a pricey ‘novelty toy’ could win a large following.