By Mark Prigg For Dailymail.com

Google has revealed its plan to bring augmented reality to Android in the latest round to its smartphone battle with Apple.

As Apple unveiled the first apps that will use its ARKit software, Google showed off ARCore, a similar system for Android handsets.

It hopes the larger number of Android handsets in the market will give it an advantage over arch-rival Apple.

Android everywhere: Google hopes the software will leads to hundred of new AR apps for its handsets

Motion tracking: Using the phone’s camera to observe feature points in the room and IMU sensor data, ARCore determines both the position and orientation (pose) of the phone as it moves. Virtual objects remain accurately placed.

Environmental understanding: It’s common for AR objects to be placed on a floor or a table. ARCore can detect horizontal surfaces using the same feature points it uses for motion tracking.

Light estimation: ARCore observes the ambient light in the environment and makes it possible for developers to light virtual objects in ways that match their surroundings, making their appearance even more realistic.

‘With more than two billion active devices, Android is the largest mobile platform in the world, Google said.

Google says the aim is for the software to run on 100 million Android handsets by the end of the year.

However, the firm has struggled to get users to update to the latest version of its software because of the huge number of different phone and tablet makers.

It says the AR software will work without any additional hardware, which means it can scale across the Android ecosystem.

‘ARCore will run on millions of devices, starting today with the Pixel and Samsung’s S8, running 7.0 Nougat and above.

‘We’re targeting 100 million devices at the end of the preview, and working with manufacturers like Samsung, Huawei, LG, ASUS and others to make this possible with a consistent bar for quality and high performance.’

Google is also developing its own apps to help users create 3D content for AR or VR.

‘Alongside ARCore, we’ve been investing in apps and services which will further support developers in creating great AR experiences.

‘We built Blocks and Tilt Brush to make it easy for anyone to quickly create great 3D content for use in AR apps.’

Tim Merel, managing director of technology consulting firm Digi-Capital, believes Apple’s entry into AR will catalyze the field. His firm expects AR to mushroom into an $83 billion market by 2021, up from $1.2 billion last year.

That estimate assumes that Apple and its rivals will expand beyond AR software to high-tech glasses and other devices, such as Microsoft’s HoloLens headset.

For now, though, nothing appears better suited for interacting with AR than the smartphone. Google already makes AR software called Tango that debuted on one Lenovo smartphone last year and will be part of another high-end device from Asus this month. 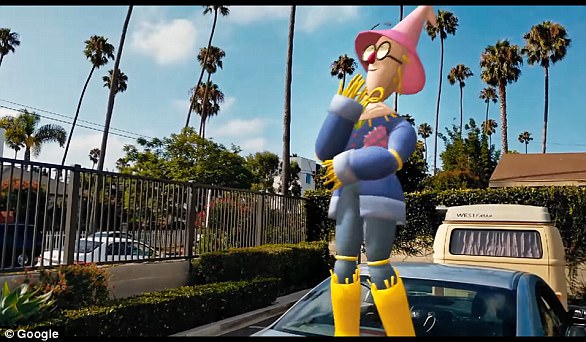 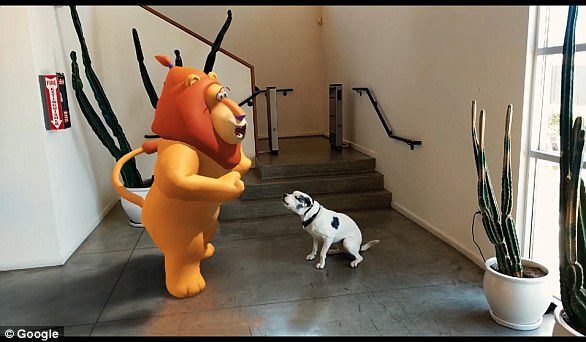 Google showed off several demonstrations of the software, including characters such as a lion and a tin man.

But it will be years before Tango phones are as widely used as iPhones, or for that matter, iPads. Most of those devices are expected to become AR-ready when the free iOS 11 update hits next month.

Nearly 90 percent of Apple devices powered by iOS typically install the new software version when it comes out.

Assuming that pattern holds true this fall, that will bring AR to about 300 million Apple devices that are already in people’s hands.