A small group of white nationalist allegedly stormed the Gosford Anglican church over the weekend while dressed in costumes, brandishing fake weapons and yelling at the small congregation through a microphone.

The Cooks Convicts, which were formed by infamous right-wing leader Neil Erikson, stormed the small church on the NSW Central Coast known across the country for its inclusive messaging and pro-diversity signs, Father Rod Bower said.

The group of five men have since been identified as Erikson, Paul Exley, Rino Grgurovic, Danny Parkinson and Lachlan Spalding.

A video later shared to the group’s Facebook page shows members of the congregation were startled by their presence and one woman screamed out in fright as they entered.

Erikson, who was dressed in a Jesus costume, started saying through a megaphone: ‘What have you done to my house? You’ve desecrated my father’s house.’

He then stood yelling on the altar until Father Bower lead his congregation in a hymn that drowned out the sound of his microphone.

In the video, the group cited Bower’s support for gay marriage, as well as the church’s inclusive signs, which have included ‘bless the burqa’ and ‘Jesus had 2 dads and he turned out OK’, as the reason they stormed the service.

Four members then posed for a photo in front of the sign, which read: ‘Ramadan Mubarak’.

Father Bower said that the attack on his congregation shows just how active right-wing extremism has become in Australia. 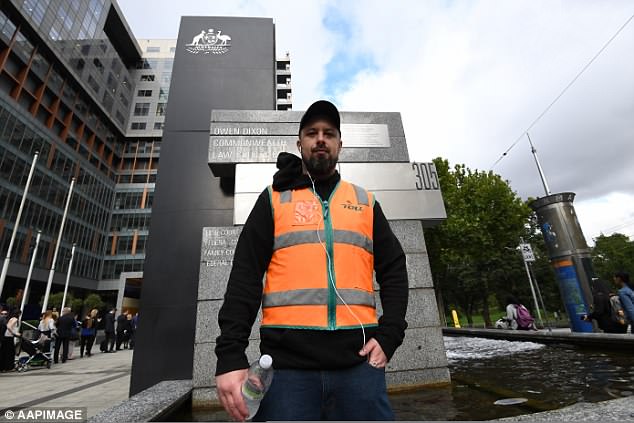 ‘This was an extremely traumatising event. Fortunately many regular parishioners were absent so the devastation was somewhat minimised,’ he said in a statement.

‘This was in my view a terrorist attack. One cannot imagine that had these men been Muslims they would have been allowed to walk away from this act of violence and intimidation.’

‘These people are to Christianity what Isis is to Islam. This attack shows how far we have gone down the road of right wing extremism; such an attack on a church could not have been imagined only a few years ago.’ 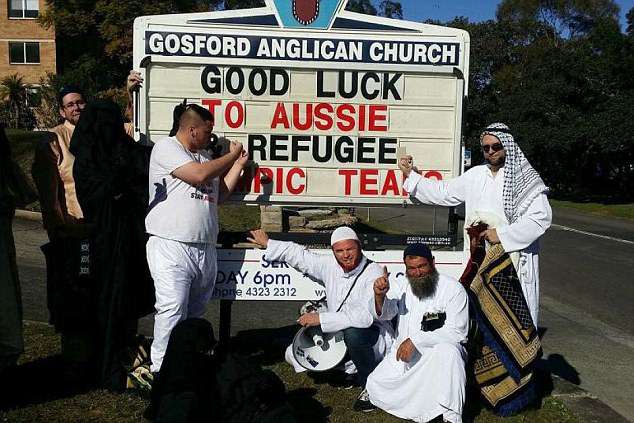 In 2016 members of the now defunct Party for Freedom disturbed a sermon at the Gosford Anglican Church. Eriskon was among the group who wore Muslim attire

Erikson made a name for himself in 2017 by harassing then-Labor senator Sam Dastyari while wearing a uniform from his former employee, Toll.

The company later took him to court over damages where he was slammed as ‘childish’ for attending court wearing a high-visibility vest also labelled with the companies branding.

It is not the first time the known neo-nazi has harassed the patrons of Gosford Anglican church. 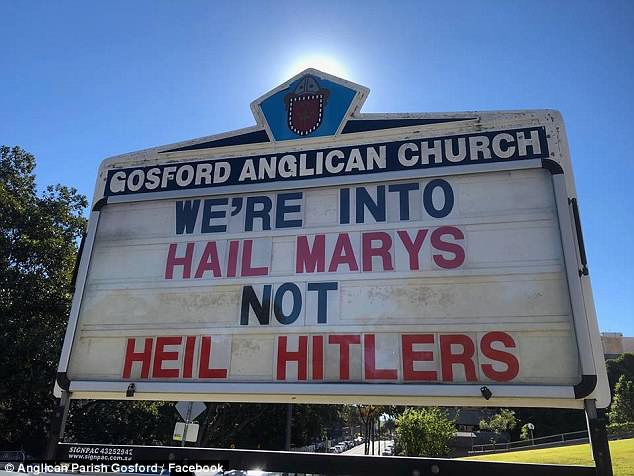 After the weekend incident the church’s sign was changed to ‘We’re into hail Marys, not heil Hitlers’

Erikson was part of the 2016 attack on the church where members of the now defunct Party for Freedom, which centred on being anti-Islam and anti-immigration, disturbed a sermon wearing mock Muslim attire.

In a separate post after the incident Fr Bower said: ‘We will not be silenced.’

‘These ‘Christianist’ terrorists used violence and intimidation to try and silence our message of love and inclusion.’

On Monday, the church’s sign had changed to ‘We’re into hail Marys, not heil Hitlers’.

NSW Police have confirmed they are making inquiries into the incident.