Grandmother, 87, with Alzheimer’s was locked in an Age UK minibus for nearly FOUR HOURS

A pensioner with Alzheimer’s spent hours locked in a charity minibus after the driver forgot about her and went home for the weekend.

The family of grandmother Beryl Harris, 87, fear she could have died after she spent more than three hours abandoned in the Age UK bus after dozing off.

Beryl was left behind by the driver, who forgot to take her home, then returned to a centre run by the charity on a Friday night, locked up the van and left.

Beryl Harris (centre), 87 of Sheppey in Kent, with daughter and granddaughter Tina and Gemma Cunningham (left and right). Ms Cunningham has questioned why the driver was not sacked

Her family claim that, after she was found inside the vehicle, Age UK staff joked about the ordeal, speculating that Beryl had had a nap.

Granddaughter Gemma Cunningham has questioned why the driver was not sacked after she launched a frantic search party at around 7pm that evening, when carers who visited Beryl got no answer at her flat in Sheppey, Kent.

Relatives were initially told everyone on the bus had been dropped off at home – but it emerged Beryl was left in the van from about 3.45pm until 7.30pm.

‘I went down there and realised nan wasn’t there.

‘We thought she had gone walkabout or something.’

She said calls to Age UK went unanswered but she used a private number to contact a staff member.

Gemma added: ‘We really started to panic. She’s usually back before 4pm.’ 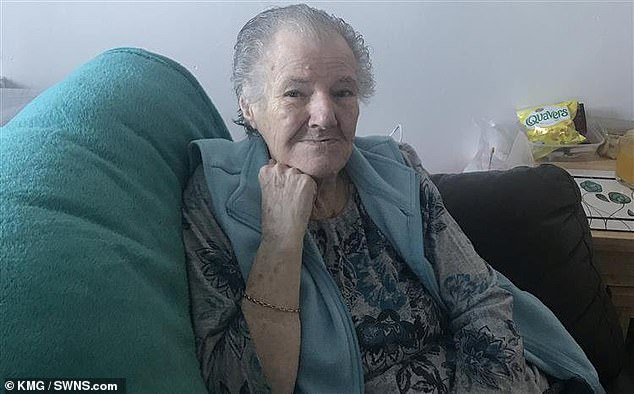 Age UK called to say Beryl was on the bus after a search party had started searching the area for Beryl – and joked about the ordeal.

Gemma said: ‘They were laughing and joking saying nan probably had a kip.

‘I said it’s not a laughing and joking matter.

‘If nan didn’t have family she would have been left on there. She would not have been found until the Monday.

‘An old person wouldn’t have lasted more than a day. She would have been dead.’

The family made an official complaint to Age UK and said they were not happy for Beryl to keep attending the charity’s centre.

She had used the charity’s Sheerness branch but that provision stopped at the end of October, her family said.

An investigation was carried out after the incident in July which resulted in disciplinary action.

The charity also said changes were implemented, but Gemma and Tina say they do not understand how the driver kept their job.

Mother-of-two Gemma added: ‘If I’d left the kids in the car, I’d have had social services on my back. If she’d died they’d be up for manslaughter.’ 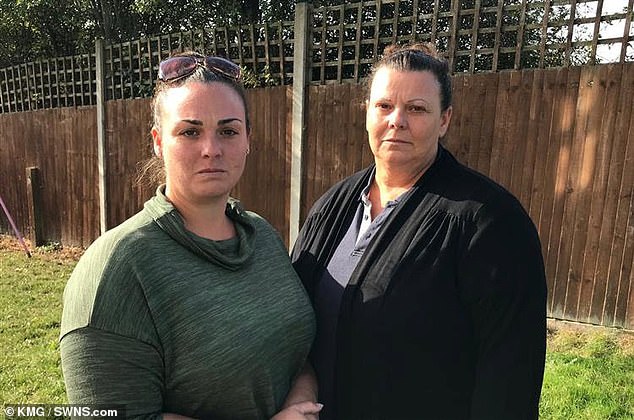 Beryl Harris’s daughter and granddaughter Tina (right) and Gemma Cunningham (left) have both expressed concern over how the incident was handled. But Age UK has assured the family that disciplinary action has been taken and changes made

Age UK chairman Alan Doucy said: ‘We are truly sorry for this incident and the upset caused and have apologised to our client and their family.

‘Our number one priority is to ensure the safety of all older people in our care so we are very disappointed to have fallen short of that.

‘Following the incident we took immediate steps to investigate how this occurred, as well as implementing our formal disciplinary procedure with the member of staff concerned.

‘In line with our regulatory responsibilities we reported the incident to Kent County Council, the Charity Commission and Age UK, and continue to work closely with them.

‘We have now put in place new measures and processes to try and ensure this kind of situation could not happen again.

‘These include, appointing additional drivers, extra training for staff who drive minibuses, updating our record-keeping process, and ongoing discussions with Kent County Council regarding our transport to further strengthen our policies and processes. 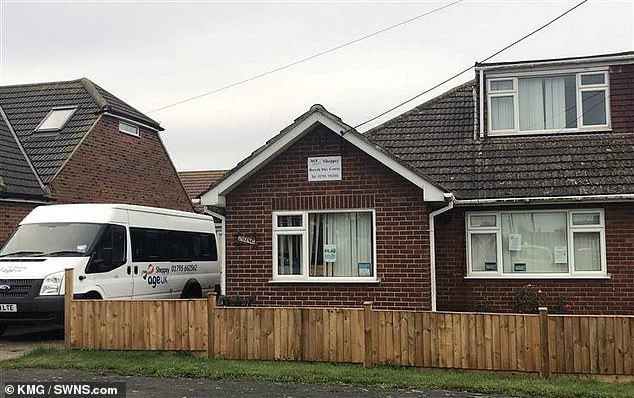 Beryl Harris was abandoned at an Age UK centre at Leysdown-on-Sea, Sheppey after falling asleep in a minibus. The charity has since said new measures and processes have been put in place to try and ensure this kind of situation does not happen again

‘We are also investing in a digital record-keeping system to further improve our systems.

‘We have also met with the family since the outcome of our investigation to listen to their concerns, and took steps to ensure this was as objective and transparent as possible.

‘Throughout this period we have taken every step to ensure our client was supported and that they still visited the centre.’

A council spokesman said: ‘The incident is being treated extremely seriously and a safeguarding inquiry has been launched into the circumstances. This investigation is ongoing.

‘KCC staff are working with the family to ensure the individual concerned continues to receive appropriate care and support.’