Fans will be pleased to hear that filming is well and truly underway for Grantchester’s seventh series.

And recently stepping out on set in the town, located near Cambridge, fan favourite Tom Brittney was spotted rehearsing lines with co-star Robson Green, 56, before interacting with passers-by.

The actor, 30, who plays Reverend Will Davenport in the ITV series, was dressed in character as he stopped to fuss over a fan’s dog in between filming.

Tom was seen beaming away as he doted on the pup, passing by with a dog walker, in between takes.

He was filming outside a church in the village of Grantchester, with filming grabbing the attention of fans as they walked by, as many stopped to interact with the cast.

When he wasn’t charming the locals, Tom was busy gearing up for his upcoming scenes with co-star Robson, who plays Geordie Keating in the show.

The pair brushed up on their lines as they read through a script of a new episode, before stepping out on set as the cameras began to roll. 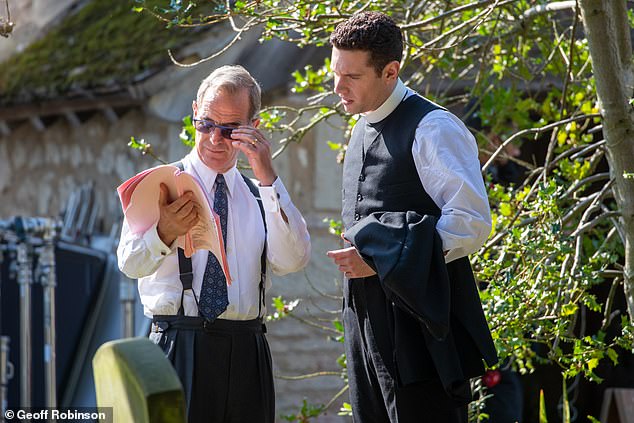 Reunited: He and the cast are already filming for season seven of the ITV series, with the actor, 30, joining his co-star Robson Green on set in the village near Cambridge 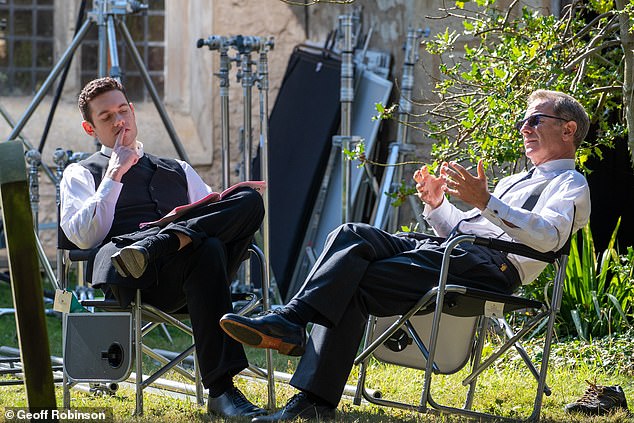 Taking a break: The pair, who head up the cast, were seen rehearsing their lines and having a chat in between takes as they filmed new scenes together

Proving their friendship is just as strong offscreen as it is on, the actors were seen chatting away in between filming as they sat together while taking a break.

They joined Al Weaver and former EastEnders Kacey Ainsworth, who were also seen on set filming scenes for series seven.

The cast looked delighted to be back on set once more as production continues for the new series of Grantchester. Filming kicked off for series seven in July.

It comes as season six of Grantchester plays out on TV screens, with the first episode airing on ITV earlier this month. 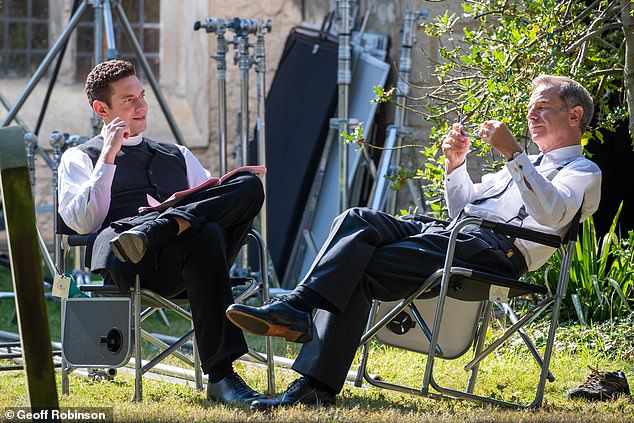 Close: Tom and Robson proved their friendship is just as strong offscreen as it is on 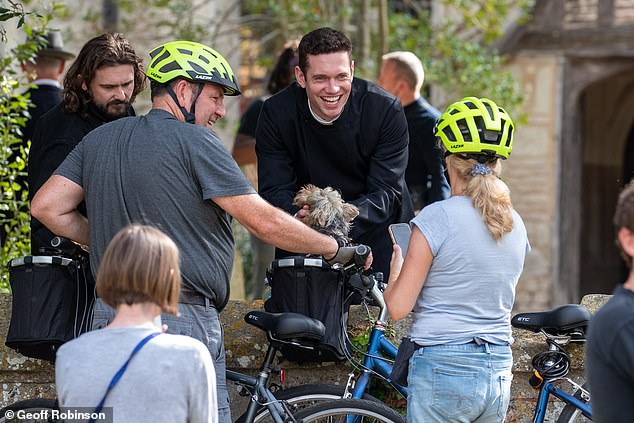 Huge hit: Tom, who plays Reverend Will Davenport on the show, stopped to interact with fans including their pet pooches as they walked by while filming took place 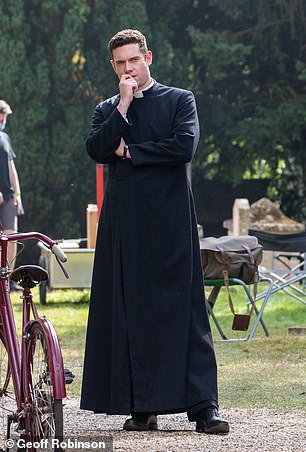 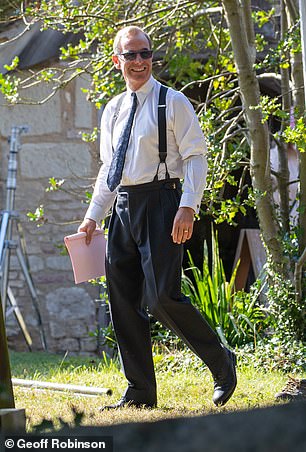 Back in action: Tom (L) and Robson (R) were dressed in character and looked delighted to be back on set once again 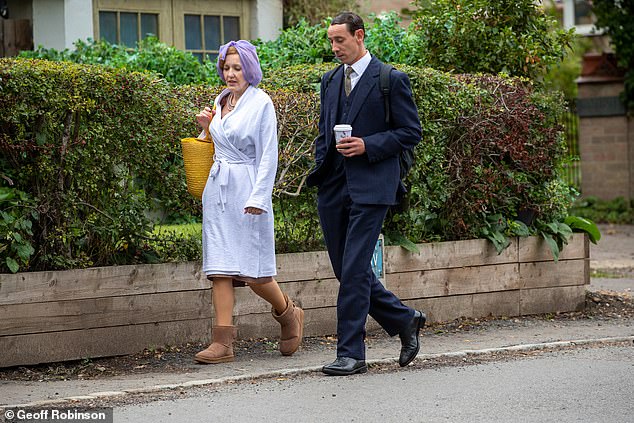 Fans of the show were treated to a dramatic trailer ahead of its release which saw the Reverend’s step-sister causing chaos while the Keatings and the vicarage family were on a well-deserved summer break.

The relaxing break they’d hoped for was not all it seems to be, however, as Geordie and Will soon discover the suspicious death of the camp’s owner, with Will’s step-sister being arrested amid the murder investigation.

The cast have filmed season six and seven of Grantchester back-to-back following filming being disrupted amid the coronavirus pandemic.

In a statement, Executive Producer Emma Kingsman-Lloyd previously said: ‘In these difficult times we are delighted to be able to film another series of our beloved Grantchester. 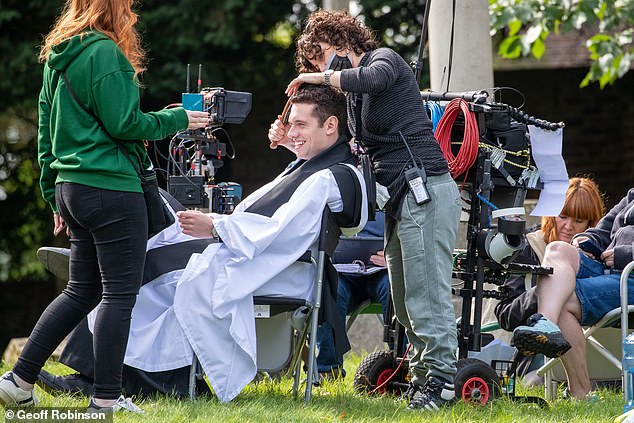 No rest for the wicked: Season six and seven of Grantchester has been filmed back-to-back following disruption to the series due to the coronavirus pandemic (pictured above: Tom Brittney) 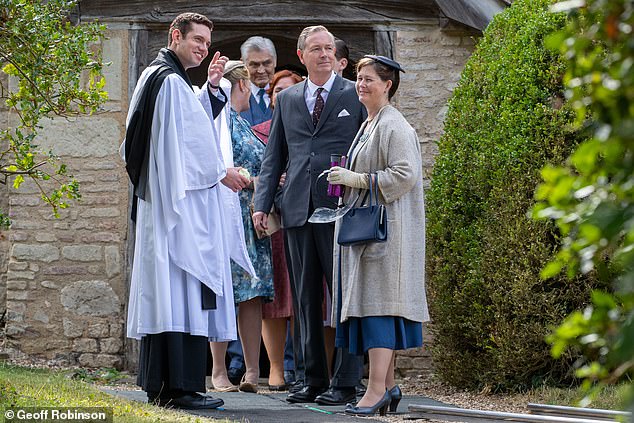 Working hard: The cast have been filming for season seven since July, while series six of Grantchester first hit screen earlier this month 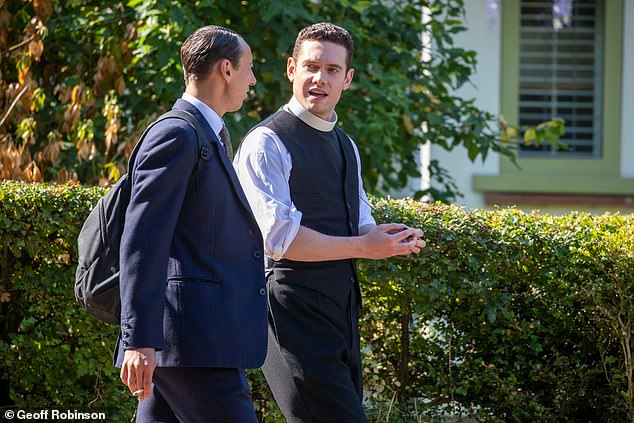 Moving forward: James Norton was previously the lead actor of the show, playing Reverend Sidney Chamber onscreen, until his departure in series four which saw Tom take over 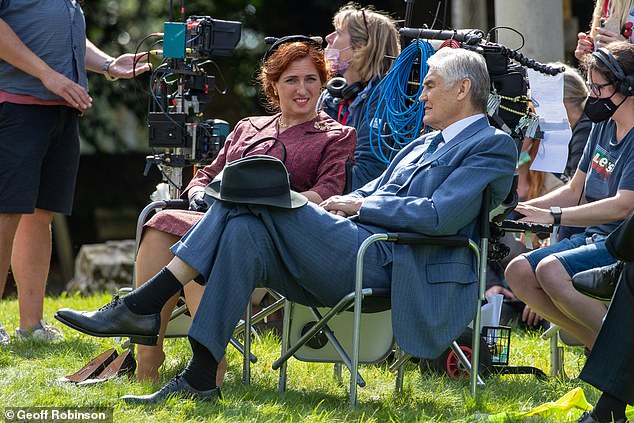 ‘The cast and crew have worked tirelessly to bring the series to the screen and we know the audience are very excited to see what Will, Geordie and the Grantchester family have in store for them.’

The TV series is adapted from the Grantchester Mysteries novels penned by James Runcie and was developed for television by Daisy Coulam.

James Norton was previously the lead actor of the show, playing Reverend Sidney Chamber onscreen, until his departure in series four in 2019

He was replaced by Tom’s character, Will, who has taken over as the village’s new crime-solving Vicar.

Fans can expect to see the relationship between Will and Geordie grow in season six of Grantchester, with the pair’s friendship set to be put to the test.

Sharing an insight into the differences between the pair, Robson told The Express: ‘Will is that kind of son I never had, but also what I went through in the war, he doesn’t understand.

‘You know he believes in marching for peace whereas I see the world as it is. I think that message is really pushed through the series.’ 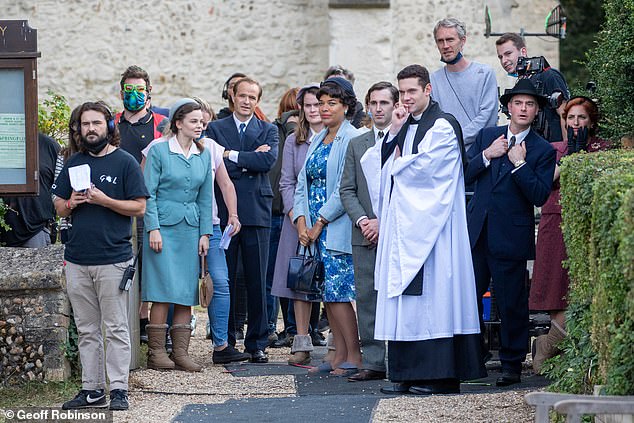 Fan favourite: The TV series is adapted from the Grantchester Mysteries novels penned by James Runcie and was developed for television by Daisy Coulam