She’s known for being a free-spirited Californian who favours wellness and once declared ‘Yoga is my thing’.

And Meghan Markle even has her meditation guru on speed dial in case of emergencies after claiming in her now defunct blog that it ‘makes her happier’.

The Duchess of Sussex was a regular at classes by Light Watkins, who is a meditation teacher for the stars, and said the ‘mystical man’ transformed her life. 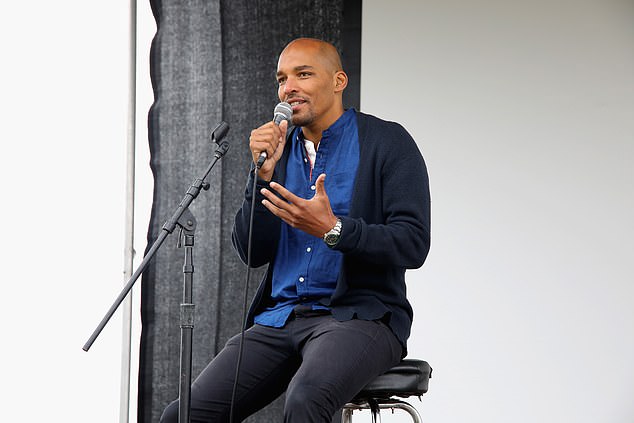 While an actress filming Suit, she wrote on her blog The Tig: ‘I can’t put my finger on the why or the how, but I will tell you this much, for me…I am much happier and meditation has much to do with that.’

Back then she said she favoured twice-daily meditation — 20 minutes in the morning and afternoon.

And it has obviously rubbed off on her husband, in Birkenhead this year Harry, once known as the ‘party prince’, told a Buddhist monk he practises meditation ‘every day’.

Guru Mr Watkins, 45, who teaches mainly in Los Angeles and New York, offers a £750 four-day course which was frequented by the Duchess of Sussex. 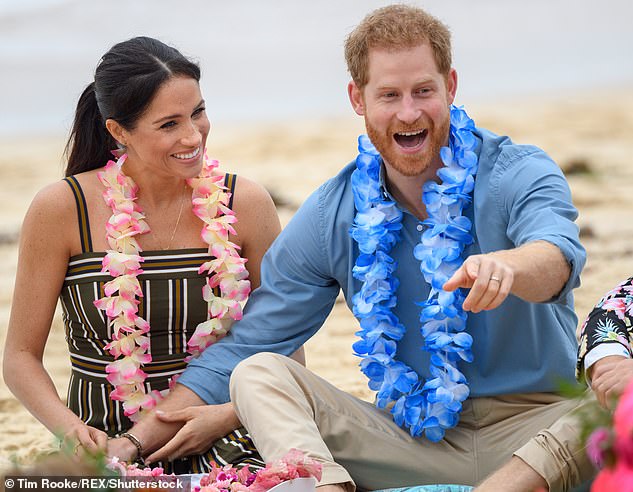 The the mediation guru revealed Meghan still has his phone number and email address in case she needs any help, the Times reports.

He is a celebrity go to for relaxation, having taught more than 2,500 people including Hollywood actors, chief executives and athletes.

He told the Times: ‘If you make meditation your habit it can impact all the other habits you want to have – eating better, being a better communicator in your relationships, being more productive at work, sleeping better.

‘But in order to get the benefits, you have to meditate every day.’

It’s the same sentiment he had for the Duchess of Sussex when he first taught her.

She wrote on her blog: ‘I told Light I didn’t have enough hours in the day to do it, and he told me that’s why I needed twice as much. 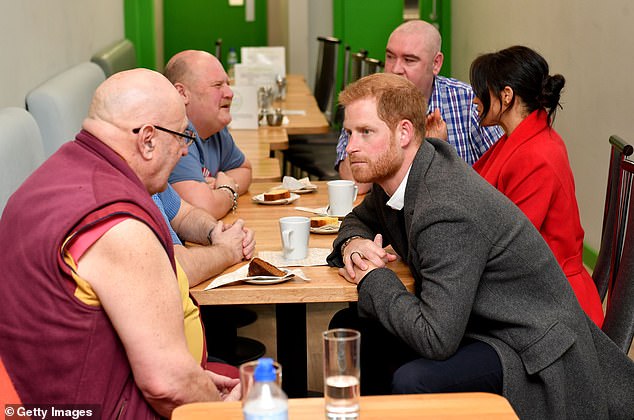 It has obviously rubbed off on her husband, in Birkenhead this year Harry told a Buddhist monk he practises meditation ‘every day’

‘Not gonna lie, I rolled my eyes thinking “Oh give me a break, mystic man.” But lo and behold, this mystical man was right.’

Most of Mr Watkins’ classes involve chanting a private Sanskrit mantra, and he claims his practice helps with sleep, patience and overall well-being.

It’s not just Meghan who has grown to love the ancient practice, as Harry recently revealed that he ‘meditates every day’ while chatting to a Buddhist monk. 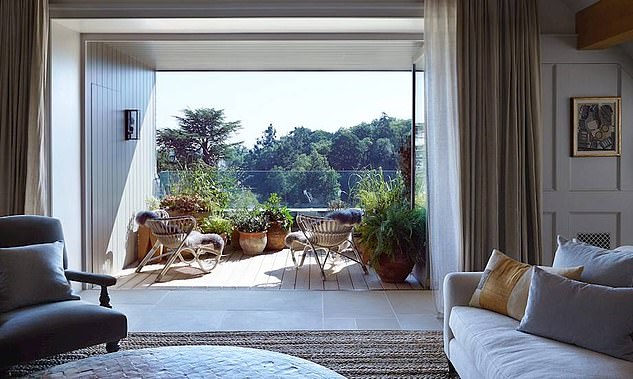 The couple stayed in the £10,000-a-night Long Room for three nights on their recent ‘babymoon’ at Hampshire’s Heckfield Place (pictured)

It may not be just Meghan’s influence. In a 1992 letter, Princess Diana spoke of her interest in the Indian spiritualist teachings of Omraam Mikhael Aivanhov.

Prince Charles has also been on meditative retreats to Mount Athos, in Greece. Even the Duchess of Cornwall is in on the hobby: during an Indian retreat she undertook daily dawn yoga and meditation sessions.

It comes as Meghan and Harry recently checked into Heckfield Place hotel in Hampshire for three nights for a ‘pre-baby honeymoon’.

It boasts an organic ethos, a yoga studio and a spa offering ‘all-natural treatments’, and holds mind-expanding talks on subjects such as ‘How the world thinks’.

Meghan is a well-established devotee of both vinyasa and hot yoga with mother Doria being an avid teacher of the practice. 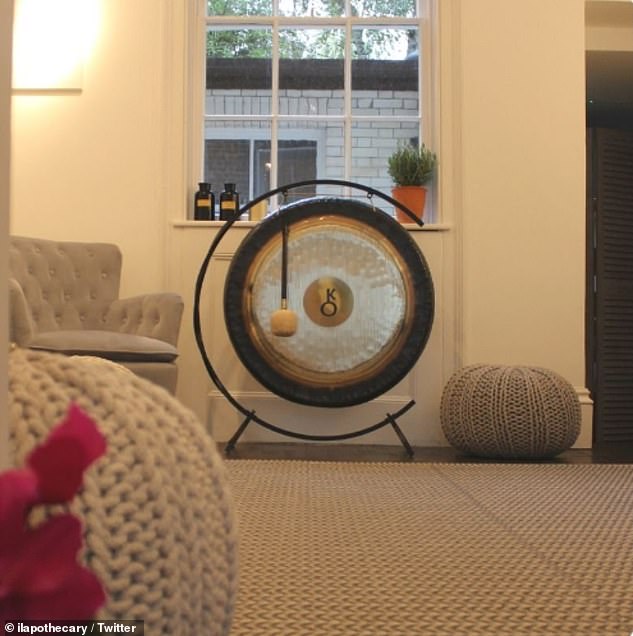 She has continued doing yoga during pregnancy and has even introduced Harry to the mindful pursuit.

The couple’s new home, Frogmore Cottage in Windsor, has reportedly been equipped with a yoga studio.

Meghan has also long been a proponent of acupuncture, which she credited with helping her beat debilitating migraines.

According to Vanity Fair, she has visited celebrity acupuncturist Ross Barr during pregnancy.

Back in 2015 Meghan said: ‘I have been a long-time believer in acupuncture. I used to have debilitating migraines — [I was] hospitalised for them — and acupuncture changed my life.’

Prior to their wedding, Harry and Meghan reportedly both visited Barr, who offers 45-minute sessions costing between £90 and £120.

Last week they were spotted leaving a Notting Hill wellness shop which offers ‘energy healing’ and meditation with ‘singing bowls’.

Just a stone’s throw from Kensington Palace — where Harry and Meghan were living until they moved out this week — Notting Hill’s Ilapothecary wellness boutique could have been tailor-made for Meghan.

Buckingham Palace refused to comment on whether Meghan still uses Light Watkins as her meditation teacher.

The bolthole of the stars: Heckfield Place Hotel

In 1794, Jane Austen’s mother wrote a poem about her daughter not being invited to a dinner given by the Lefevre family at Heckfield Place, an 18th Century Georgian manor house.

The 480-acre estate in the Hampshire countryside has 45 rooms and suites, two lakes, and its own arboretum and staff are dressed as if on the set of a period drama, with billowing skirts, waistcoats and frilly necklines.

The Duke and Duchess of Sussex, who are set to welcome their new baby in just a few weeks, stayed at Heckfield Place hotel (pictured) which is situated in 400 acres of countryside

An entire farm has been created to supply Heckfield, including an orchard with more than 400 fruit trees. The manager of the organic farm even shampoos its pigs in tea tree. All the food – under the guidance of Skye Gyngell – is homemade, from the mustard to the butter.

Hong Kong-born American billionaire Gerald Chan (co-founder of a private equity group) planned to relaunch Heckfield Place after a loving renovation in 2012, but wasn’t satisfied with the finished product.

In October 2018, it finally came to life, with one glossy mag suggesting it could be the ‘most exciting country house hotel to have opened in the past 21 years’.

Chan, who is based in Boston, was dubbed the ‘invisible billionaire’ by the Boston Globe because of his low profile.

The 63-year-old has four university degrees, is on the Forbes billionaire list, and gifted Harvard University some $350 million. As a thank you, Harvard renamed its public health school after Chan’s late father.