Drug-crazed son, 21, climbs on mother’s roof and throws tiles at police during 12-hour siege after she told him to move out

Curtis Green, 21, flew into a rage when Lorraine, 53, told him it was time to move out of their house in Newport, Gwent, Wales

A drug-crazed son climbed on his mother’s roof and threw tiles at police during a 12-hour siege after she told him to move out.

Curtis Green, 21, flew into a rage when Lorraine, 53, told him it was time to move out of their house in Newport, Gwent, south-east Wales.

A court heard Green caused £1,000 of damage by smashing a window, mirrors, door and television before clambering on to the roof of their large detached house.

Mrs Green locked herself in the downstairs toilet to hide away as her husband Norman, 63, called police.

Prosecutor Suzanne Payne said: ‘His father begged officers to take him away as he couldn’t take any more.

‘His mother was hiding in the downstairs toilet such was her fear of her son. He had taken a cocktail of crack cocaine and alcohol. Both his parents were terrified of him.’

Cardiff Crown Court heard Green climbed on to the roof and began hurling tiles off during the incident in March.

A total of 49 police including armed officers were called to the house as Green shouted threats during the 12-hour stand off. 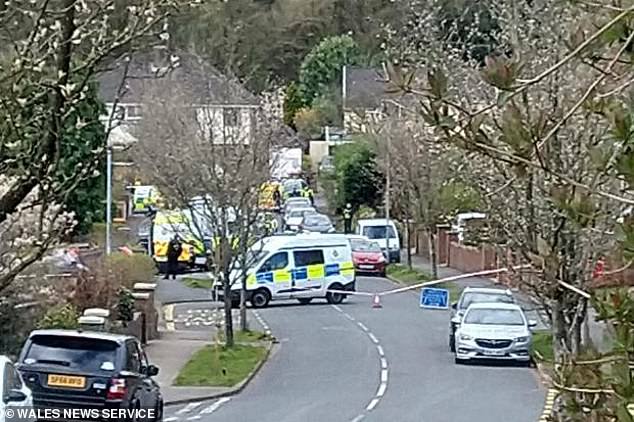 Mrs Payne said: ‘Green climbed on the roof of the porch and threw a tile which damaged the windscreen of his father’s car.

‘He then started shouting obscenities and throwing slates at the police officers who had arrived. One of the slates struck an officer in the leg, causing him pain.

‘A firearms team were deployed. The defendant headbutted a pane of glass, injuring his face and head.

‘He held pieces of glass and was threatening to self-harm and he had taken a cocktail of crack cocaine, base and alcohol. Both his parents were terrified of him.’

The court heard during the rooftop siege Mrs Green hid behind a curtain.

Green stayed on the roof all night but agreed to come down the following morning on March 31 when he was arrested.

He admitted affray, assaulting an emergency worker and two counts of criminal damage.

Gareth Williams, mitigating, said: ‘He caused a lot of damage and is very sorry and remorseful to his parents for that. It was in one way a cry for help. The real risk was to himself rather than others.’

Green was jailed for two years and two months and handed a three-year restraining order from contacting his parents.

Judge Nicola Jones told him: ‘You left your parents terrified and extremely distressed.

‘As a result of this stand-off, 49 police officers attended, including a firearms team and a negotiator.

‘This was a significant amount of police and public resources during the time of a national pandemic.’