Printable stickers and hair dye that react to ultraviolet light can be used to warn people when they’ve been out in the sun for too long, developers claim.

Researchers from the University of Washington worked with Microsoft to find an easy way to alert people with different skin tones to the dangers of lengthy UV exposure.

The team created stickers that can be worn like patches and they change colour from purple to light pink throughout the day to show cumulative UV light exposure.

The hair dye was made from pigments that change colour in the presence of UV light – they go from clear to pink and change in brightness with UV intensity levels.

They say the stickers are more effective as the dye change is permanent so can only show UV intensity at a given moment rather than cumulative exposure over the day.

In a trial, 35 volunteers used the stickers while in the sun and were able to determine whether they were at risk of sunburn 73 per cent of the time.

The patches are made of a special type of ink that is sensitive to UV-light but can be printed in any normal inkjet printer – you just have to swap out the ink packs.

The ink features a compound that produces acid when it is exposed to ultraviolet light and a pH-sensitive dye that is triggered when it detects the acid.

They have been designed to work for people with different skin tones as the tone of your skin determines how much UV light exposure you are likely be able to handle. 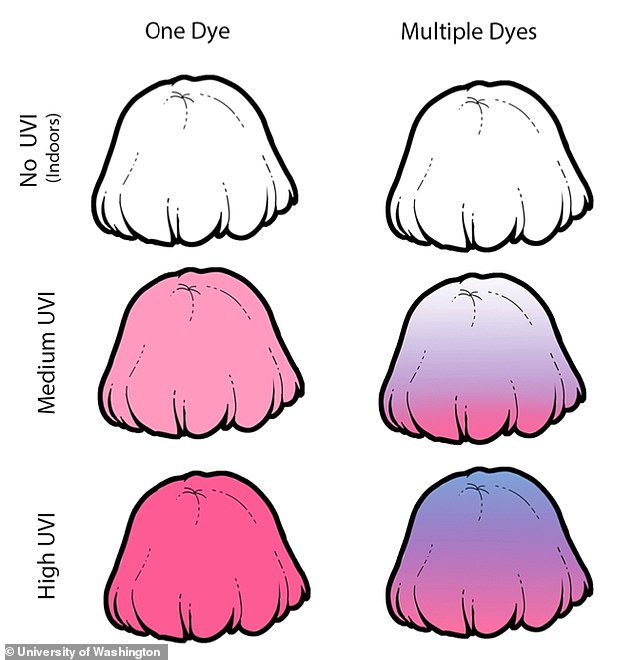 People with very pale skin may burn after about two to three hours of exposure but someone with darker skin would be ok for up to six hours without burning.

The team worked around the different tones by designing three versions of the ink.

Year-round ultraviolet exposure silently causes skin damage that goes unnoticed until sunburn, the team explained, saying they wante dto find a simple way to alert people that they may be putting their skin at risk.

‘Current personal wearables for monitoring UV exposure have not seen significant uptake, which may be attributed to their one-size-fits-all aesthetic or inapplicability to people with different skin tones,’ they explained.

That’s why they worked to create a technology that works effectively for people of a variety of skin tones – a system they’ve called EcoPatches.

They ‘mediate a person’s relationship with their environment by allowing them to create designs and formulations that resonate with them’.

They have been designed in a way that a user can check the colour of the sticker for a brief overview of their sunburn risk but get more details by scanning the sticker with a mobile phone and looking at exposure data in an app.

The hair dye was designed by the Washington team of researchers as a quick and fashionable way to see current exposure risk from UV light.

‘Environmental hazards often go unnoticed because they are invisible to the naked eye, posing risks to our health over time,’ the team said.

Dubbed EchoHair, it uses photochromatic hair dyes that can be incorporated into any existing product to show current UV intensity.

‘The head is often the part of the body that is first exposed to UV radiation, making it a prime location for measuring UV exposure’, the team wrote. 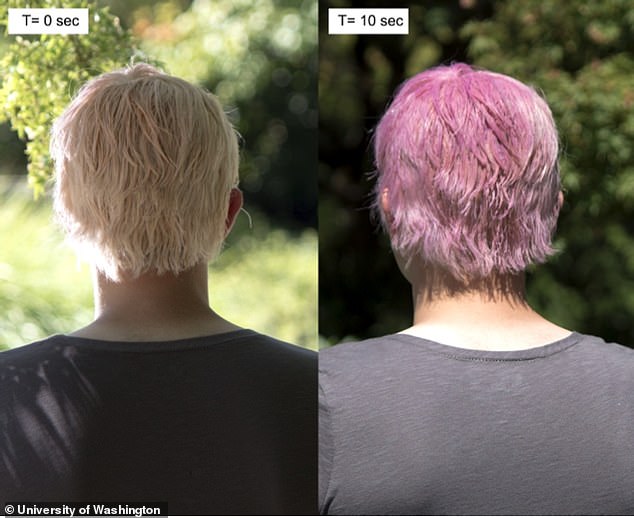 Unlike the stickers it just shows current intensity – basic the UV number often reported on the TV but in the form of brightness of colour.

So far the hair dye approach has only been shown to work effectively on white or platinum hair – rather than on darker colours – but can be used on a wig.

The patches were the more effective of the two technologies as they can work on any skin type and show exposure over time rather than just current intensity.

Details were revealed during the Proceedings of the 2020 ACM Designing Interactive Systems Conference.

MELANOMA IS THE MOST DANGEROUS FORM OF SKIN CANCER