She’s an award-winning singer breaking ground for her electro-pop hits and quirky style.

But on Saturday night, Halsey shared the stage with her rapper beau G-Eazy for a live performance at E11EVEN nightclub in Miami.

The Him & I hitmakers were unable to keep their hands off of each other as they performed their single, which has previously reached the coveted No. 1 spot on Billboard’s Top 40 chart.

Steamy on stage: Halsey and G-Eazy can’t keep their hands off of each other during a live performance at a Miami nightclub on Saturday night 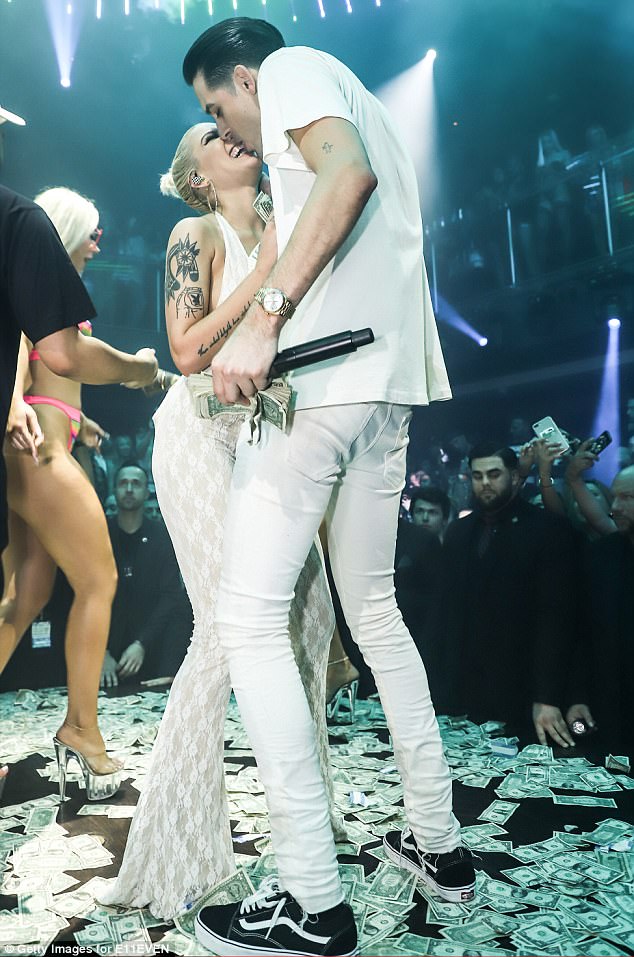 ‘Him & I’: The hitmakers embraced in a passionate kiss in front of the Florida crowd

At one point, the pair – who reportedly started dating back in August – embraced in a passionate kiss in front of their fans.

The blonde beauty showed off her sensational figure in a skin-tight white jumpsuit with lace detailing and a halter back.

Ready to command the stage, her platinum tresses were pulled  back in a tight high bun, which she paired with dramatic eye makeup and silver hoop earrings. 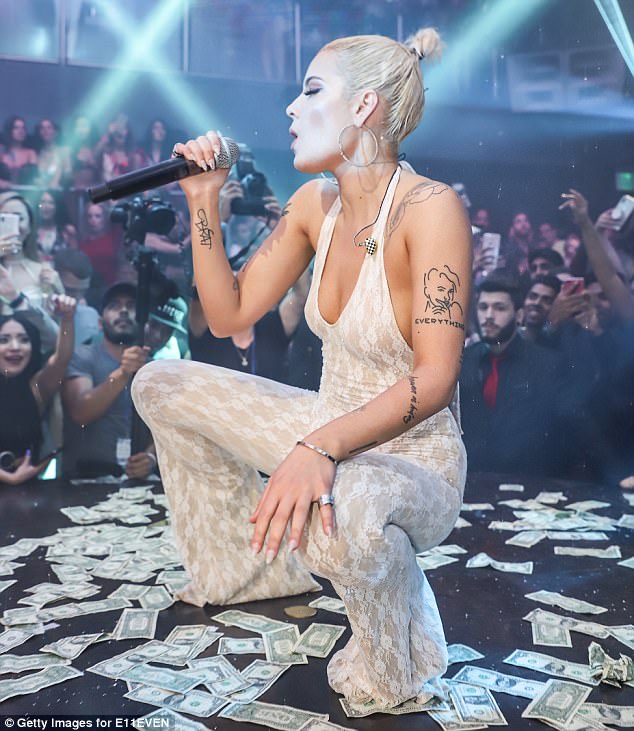 Feeling the music: The 23-year-old singer showed off her sensational figure in a skin-tight bodysuit with white lace detailing

The bombshell flashed at least eight tattoos as she belted out some of her hit songs for the Florida crowd.

Surprising guests at the club, G-Eazy joined his lady love on the stage covered in one dollar bills.

Clad in a cotton white shirt and skinny pants, the rapper kept his arms around his girlfriend during their set. 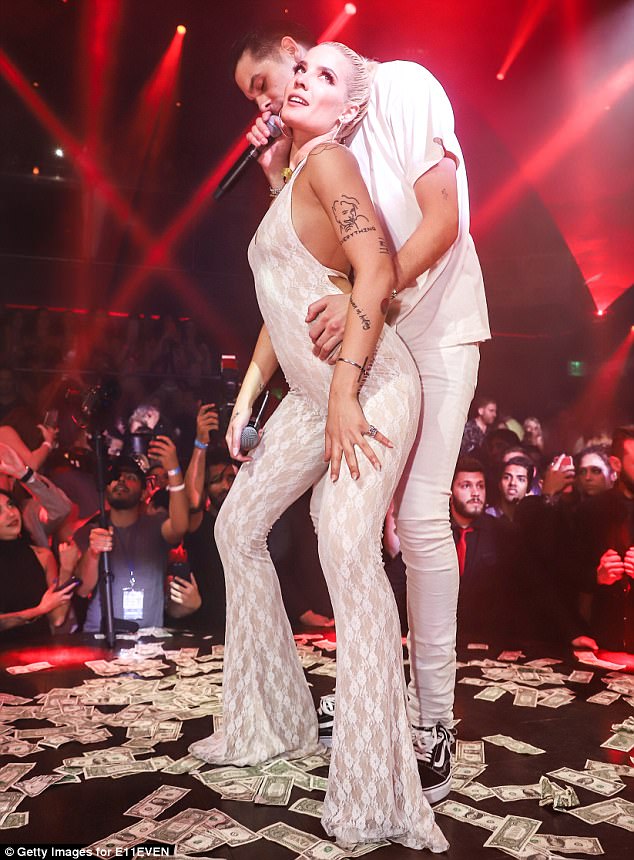 Can’t keep his hands to himself: G-Eazy surprised club guests by joining his lady love on the stage covered in one dollar bills 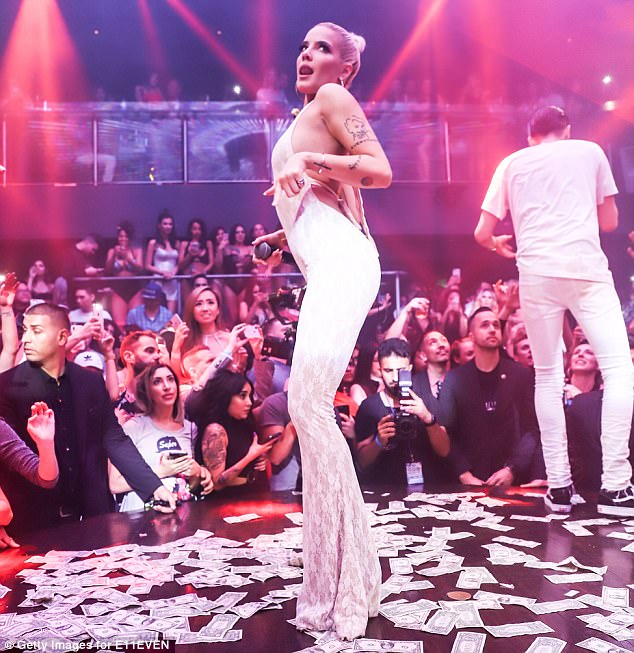 Two is not a crowd: Halsey danced for her fans and kept her blonde locks tied back in a tight high bun 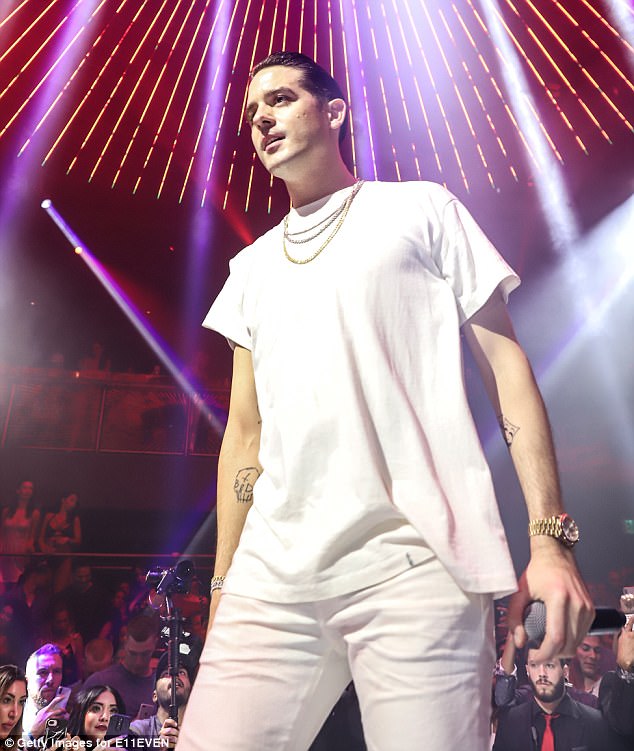 Supportive beau: G-Eazy – whose real name is Gerald Gillum – was ready for the stage in a white cotton shirt and tight pants

G-Eazy – whose real name is Gerald Gillum – topped his look off with a pair of old-school Vans sneakers and a gold watch.

Outside, he added a pop of color to his all-white outfit with a red denim jacket and a trio of silver and gold chains around his neck.

Earlier in the day, Halsey attended the March For Our Lives in Washington D.C. alongside other celebs including Demi Lovato, Miley Cyrus, and Ariana Grande. 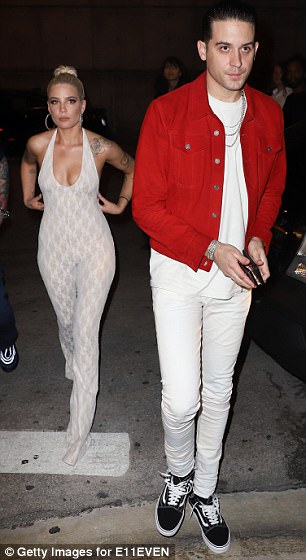 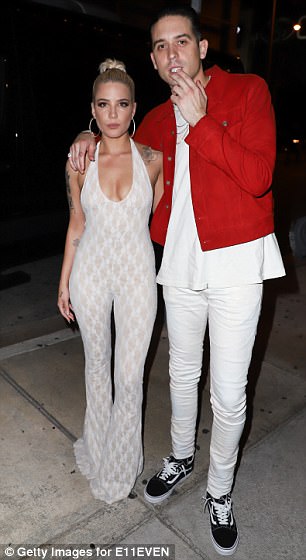 Ready for action: The couple arrived at E11EVEN nightclub in Miami wearing their performance-ready attire 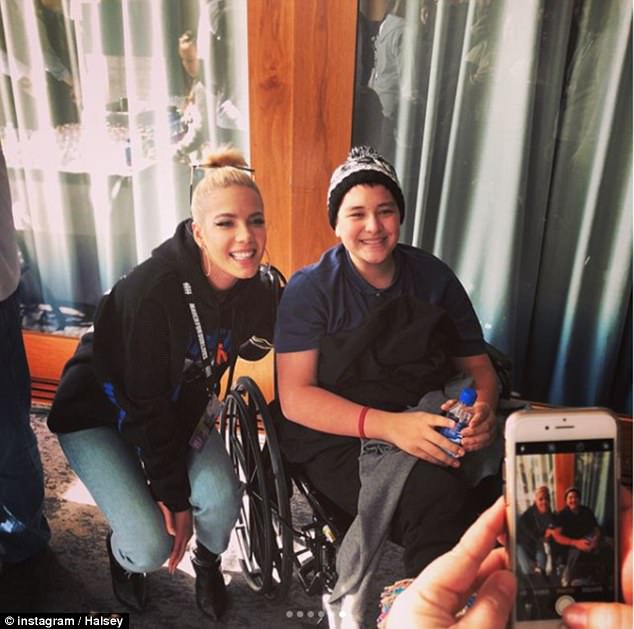 ‘Today I saw the future’: Earlier in the day, Halsey attended the March For Our Lives in Washington D.C. and shared a series of photos to her Instagram

The singer shared a series of photos on her Instagram with students – including several Parkland shooting survivors.

She captioned the post: ‘Today I saw the future with my own two eyes.’

She finished by including the captions ‘#marchforourlives’ and ‘#neveragain.’ 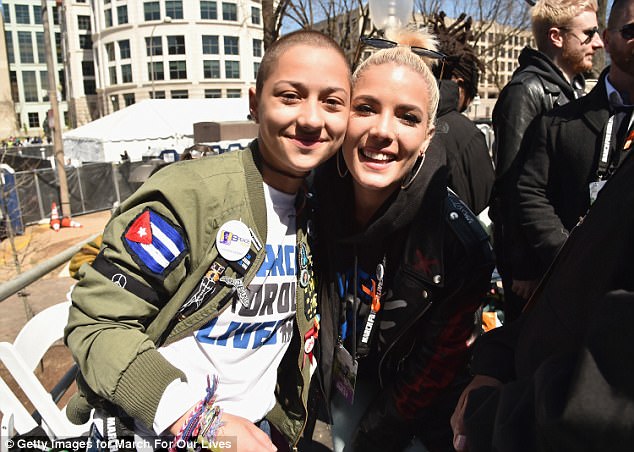 ‘#neveragain’: The songwriter posed with Parkland shooting survivor Emma Gonzalez at the event attended by other celebrities including Demi Lovato, Miley Cyrus, and Ariana Grande