Hammond slaps down Boris over demands for £5bn for NHS

Theresa May delivered a thinly-veiled rebuke to Boris Johnson today after his extraordinary public demand for more NHS funding.

The Prime Minister pointedly warned ministers not to air grievances in public at a tense Cabinet meeting.

The clash came after arch-Eurosceptic Mr Johnson demanded a £5billion ‘Brexit dividend’ for the health service.

Brexiteer ministers such as Michael Gove, Andrea Leadsom and Penny Mordaunt are keen to demonstrate that the Leave campaign’s referendum pledge of significant extra money for the NHS is being kept.

Earlier, Philip Hammond brutally slapped down Mr Johnson by pointing out that he is the Foreign Secretary and insisting he would talk to the Health Secretary about funding.

It is understood Mr Johnson stopped short of mentioning figures during the meeting, after the PM and allies warned minister that conversations should be conducted in private.

But the revolt underlines mounting Tory disquiet at Theresa May’s ‘timid’ and ‘dull’ leadership. Labour seized on the split with glee, saying it was unheard of for a Cabinet row to be leaked before it had even happened.

Mrs May’s spokesman said the Cabinet discussion on the NHS lasted for around an hour.

‘The PM and a large number of Cabinet ministers made the point that Cabinet discussions should take place in private,’ he said. 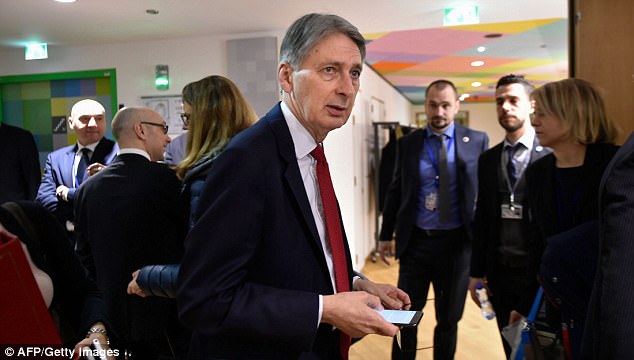 Arriving for talks in Brussels today, Chancellor Philip Hammond dismissed the extraordinary intervention by Mr Johnson – pointing out that he is the Foreign Secretary rather than the Health Secretary 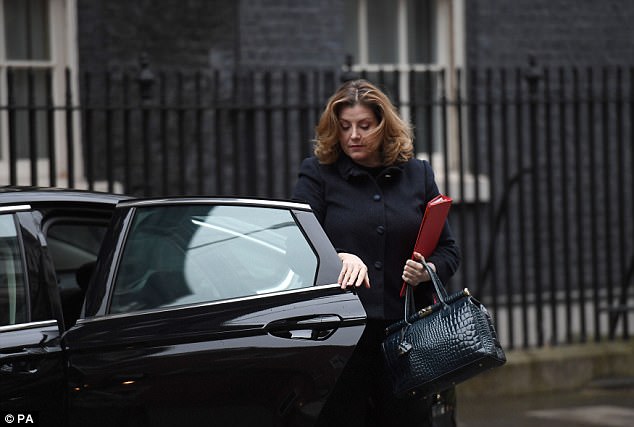 International Development Secretary Penny Mordaunt, who backed Brexit in the referendum, arrived at the Cabinet meeting today (pictured) and is expected to support Mr Johnson

Mr Hammond missed the meeting in No10 this morning because he is holding talks with EU counterparts.

But as he arrived in Brussels he told journalists: ‘Mr Johnson is the Foreign Secretary. I gave the Health Secretary an extra £6billion at the recent Budget.

‘We will look at departmental allocations again in the spending review when that takes place.’

Another Cabinet rival jibed that it was ‘not our job to keep Boris’s promises for him’, while justice minister Philip Lee – a practising GP – delivered a thinly-veiled dig about the need for goverment members to focus on their ‘own jobs’.

‘Breaching collective responsibility and leaking cabinet discussions are bad enough but part of political life. But pre-briefing your disagreement with government policy ahead of cabinet?’ he said.

The Cabinet big beast is said to have raised the NHS issue with Theresa May in private on several occasions – but the Prime Minister believes it would be ‘premature’ to commit cash before the Brexit terms are finalised.

The PM’s spokesman said: ‘The Prime Minister reminded Cabinet the Government has consistently said that we will spend money on our priorities such as housing, schools and the NHS.

‘There will also be other calls upon that money but we will discuss those priorities at that time.’

Mr Johnson’s concerns are understood to have been heightened by a recent visit to a hospital in his Uxbridge constituency, when he was accompanied by Health Secretary Jeremy Hunt.

Friends of Mr Johnson have complained that his plans to give the health service £100million a week are being delayed to prevent him claiming a political victory.

‘We are delivering Brexit and we are going to have to give the NHS more money before the next election, whatever happens,’ one said.

‘Why not link the two and deliver on the promises made to leave voters? The only reason not to is to deny Boris a win.’

Another ally of the Foreign Secretary said he would continue to make the argument for more money for the NHS ‘until it happens’.

‘Boris believes that if the Tories are going to beat Corbyn at the next election they must make the NHS a top priority and deliver new funding,’ the source said. 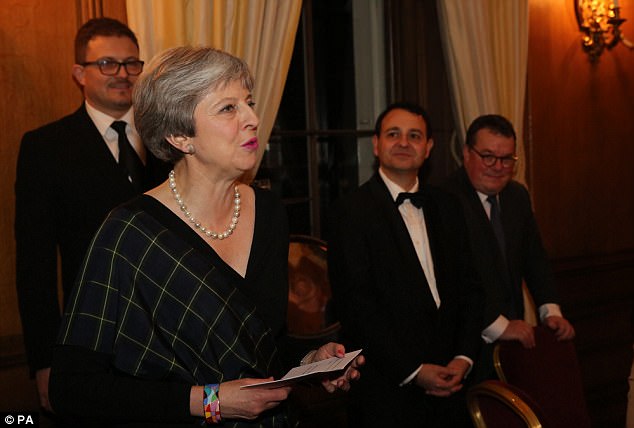 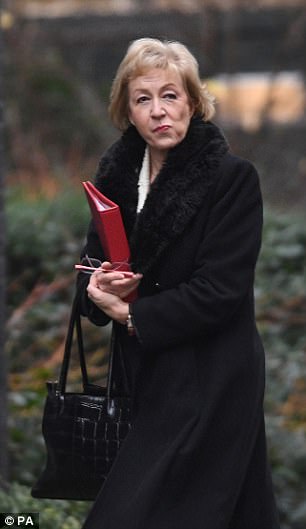 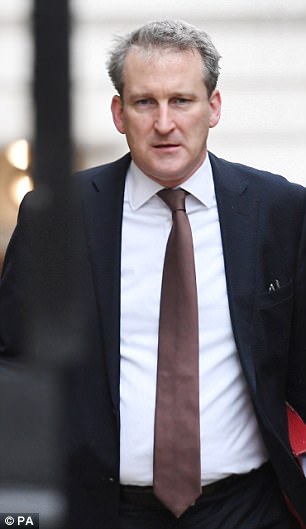 ‘Every poll conducted shows the NHS is top of swing voter concerns and every expert says it needs more money – the Cabinet will have to act and the sooner the better.

‘This isn’t about the referendum – it’s about delivering on the number one concern for the public and beating Corbyn at the next election.

‘Boris has a track record of winning and knows the Tories simply cannot afford to concede the NHS to Labour – which is why he will continue to make this argument until it happens.’

The PM’s chief of staff Gavin Barwell is said to have told Tory MPs there is no point trying to compete with Labour on health, where the Tories trail heavily in the polls.

But former Tory vice-chairman Robert Halfon said it would be ‘madness’ to short-change the NHS for political reasons.

He added: ‘There’s an umbilical cord between the British public and the NHS. They want a government that puts the NHS first and foremost.’ 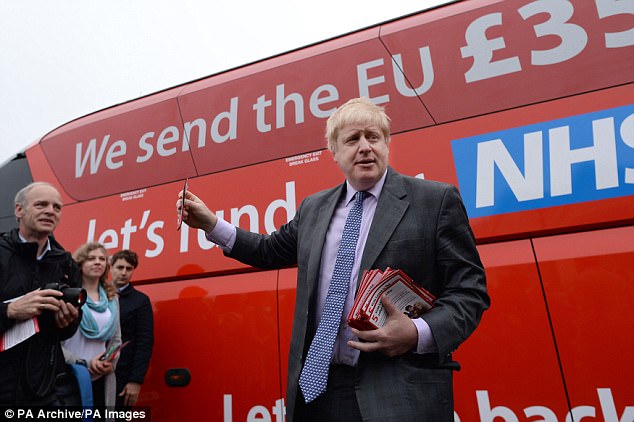 During the referendum, Mr Johnson famously campaigned in a red bus emblazoned with a slogan suggesting Brexit would release up to £350million a week to spend on domestic priorities like the NHS.

However, a Whitehall source said it was too early to start allocating cash from a Brexit dividend that had yet to be agreed.

‘Once we have an idea of the figure we will be saving we will set out what we will do with it.

Uncertainty about Brexit is hitting confidence in the economy, Philip Hammond warned today.

The Chancellor said he hoped to see ‘real progress’ in the negotiations with Brussels in the coming months to give certainty to businesses.

The International Monetary Fund cut the UK’s growth outlook from 1.6 per cent to 1.5 per cent for 2019, the year it quits the European Union.

Mr Hammond, in Brussels for a summit of European finance ministers, said there was a ‘degree of uncertainty about our future direction’.

‘Because of the negotiations that are going on there’s a degree of uncertainty about our future direction and our future arrangements for trading with our European partners and that’s bound to have an impact on thinking about the economy,’ he said.

‘The sooner we can generate certainty, the better, and that’s why we are keen to build on the momentum that we generated in December and get the negotiations moving forward now in a steady way so that we can see real progress over the course of the coming months.’

‘In the meantime, we are already getting on with giving the NHS more money – such as the £2.8 billion announced in the Budget.’

Suspicions are mounting of another coordinated bid by Mr Johnson’s supporters to force him into Downing Street.

He added: ‘It really won’t be enough to get people to vote against (Corbyn). They must have really sound reasons to vote Conservative. We really need to get on with this.’

‘He’s not really concerned about those patients waiting on trolleys in corridors and those elderly people in the backs of ambulances in the freezing cold waiting to be treated. It’s just about Boris Johnson’s tedious political games.’