A handwritten note used to break the news of the Peterloo Massacre to the government 200 years ago has been uncovered by archivists.

The torn scrap of paper contains the first panicked description of the deaths in Manchester, where cavalry charged at a crowd of 60,000 peaceful protesters who’d gathered to demand parliamentary reform.

Seventeen people, including four women and a child, were mowed down and killed by horsemen armed with sabres during the clash at St Peter’s Field. 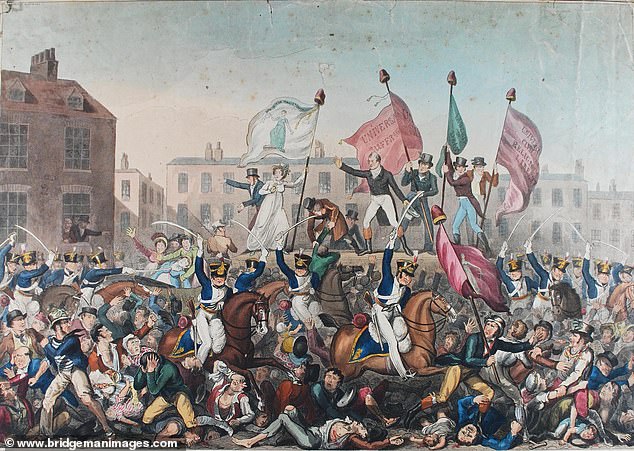 Seventeen people, including four women and a child, were mowed down and killed by cavalry i Manchester in 1819 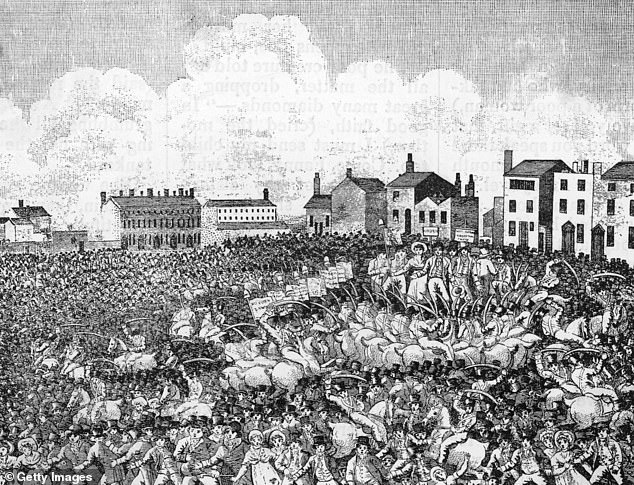 Horsemen armed with sabres charged at a crowd of 60,000 peaceful protesters who’d gathered at St Peter’s Field in Manchester to demand parliamentary reform

It’s estimated that a further 650 men, women and children were injured.

The message was found in a box of Home Office documents stored in the National Archives before it was transcribed and digitised in 2012.

But its existence was only made public yesterday, ahead of the 200th anniversary of the massacre on Friday.

What was the Peterloo massacre?

The Massacre occurred during a period of immense political tension and mass protests. Fewer than 2% of the population had the vote, and hunger was rife with the disastrous corn laws making bread unaffordable.

Around 60,000 to 80,000 protesters gathered and most were supporters of parliamentary reform. Areas like Manchester had become increasingly industrialised yet disenfranchised. Inspired by men like Henry Hunt and the journalist William Cobbett, they began to campaign for suffrage.

They argued that extending the vote to working men would lead to better use of public money, fairer taxes and an end to restrictions on trade which damaged industry and caused unemployment.

Yet soldiers rode in, slashing at protesters with sabres. Many were trampled as they tried to escape

Huddersfield magistrate Haugh Allen witnessed the violence on August 16, 1819, and scrawled his message on the piece of paper before sending it via mail coach to the Home Office.

It arrived on home secretary Lord Sidmouth’s desk the following day, on August 17, at 11pm.

In it, Allen writes: ‘The meeting took place at 1 o’clock.

‘Hunt in the chair with 16 flags and 7 caps of Liberty [radical symbols] hoisted up amongst upwards of 60,000 people, the cavalry has just broke in upon them, the flags are taken, Hunt and his party secured, several lives are lost and a number wounded.

‘The cavalry are now securing the streets in all directions, ½ past 2 o’clock, Yours, H. Allen.’

Men, women and children had gathered in St Peter’s Field in the town centre of Manchester at 1pm on August 16, 1819, to call for parliamentary reforms.

They held flags and banners woven in bright silk and waved placards that read, ‘Annual Parliaments’, ‘Universal Suffrage’ and ‘Vote by Ballot’.

The well-known radical public speaker Henry Hunt addressed the crowd and called for increased representation of the working classes.

But cavalry were ordered to move against the peaceful crowds to arrest Hunt and maintain order.