Head teacher and secretary are jailed for almost 10 years after defrauding school of £500,000

A corrupt head teacher and a school secretary have been jailed for almost ten years after defrauding their school out of £500,000 that they splurged on oil paintings and shopping sprees.

While she was pocketing the cash she told staff at the school they had to buy their own supplies and refused requests for pay rises from the teachers.

She was helped by Deborah Jones and the pair blew hundreds of thousands of pounds of school funds buying designer goods.

In one transaction Hollingsworth, spent £9000 on re-upholstering furniture at her home while corrupt secretary Deborah Jones admitted her husband’s firm was paid around £74,000 for phantom work at the school.

Hollingsworth, 55, and Jones, 57, used the school’s cheques and bogus purchase orders to take the money, Wolverhampton Crown Court was told.

Prosecutor Mr Mark Jackson said the pair travelled hundreds of miles to exclusive boutiques and stores selling expensive designer goods while Hollingsworth was telling her staff the school had no money because it had been short changed by the local authority. 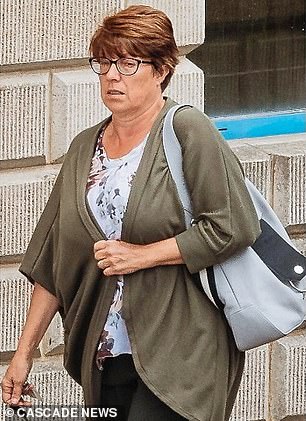 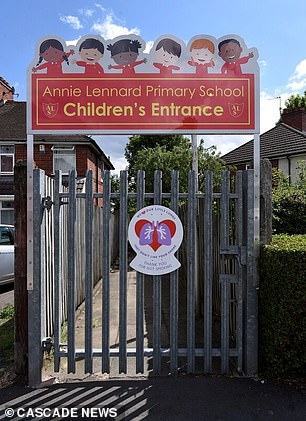 Staff had to buy basic materials for pupils with their own money and a pay rise was rejected to try to help balance the books while the two women and other defendants were, ‘defrauding hundreds of thousands of pounds from the school’s budget,’ said Mr Jackson, prosecuting for Sandwell Council.

Hollingsworth spent more than £2,000 of the cash-strapped school’s money on two oil paintings, one of a beach and the other entitled Barge at Moonlight said Mr Jackson who added: ‘When questioned she seemed to say that she bought them for the school but kept them at her home.’

Hollingsworth who was jailed for five and a half years and Jones who received a four year three month sentence made 180 visits to boutique stores on shopping sprees funded by cheques from the school.

They plundered more of its money in kick back deals during which tradesmen were paid for work that was either overpriced or invented and shared the profit with one or both women.

The 55-year-old head teacher’s builder husband Joseph, aged 58, was also imprisoned for a year for his part in the racket and an attempt by him to pervert the course of justice. 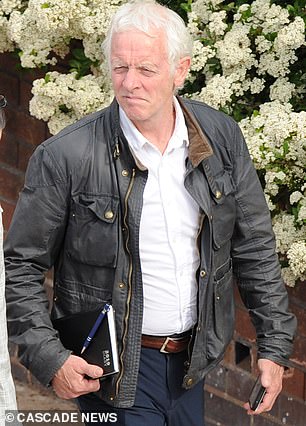 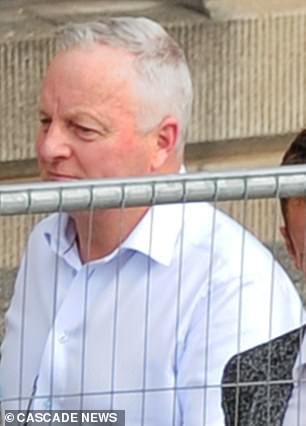 Stephen Roberts (right) aged 60, was found guilty of being involved in the conspiracy with the head teacher during which he laundered money for her. Joseph Hollingsworth (pictured left) aged 58, was also imprisoned for a year for his part

The court heard that Hollingsworth, from Cannock, was responsible for the school losing at least £513,000 while Jones from Cradley Heath, was involved in at least £439,000 of the loss.

Judge Simon Ward, sitting at Wolverhampton Crown Court, told the shamed head teacher: ‘You had great responsibility at the school, were in a position of great trust in charge of the finances to ensure best value for the school. It wasn’t your money and it had to be spent wisely not generously on yourself.’

The judge continued: ‘These series of conspiracies would not have existed without you. You abused your position of power, trust and responsibility to become the lynch pin for all this offending. You amassed a small network of people who each became involved in your dishonest scheme. 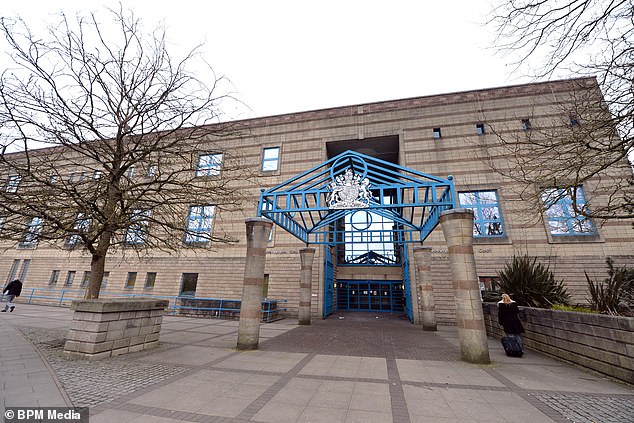 ‘As a result the school is having to rebuild itself, not with bricks and mortar but with different financial procedures and other changes to raise moral from its parlous state caused by the two people running the school turning out to be criminals.’

Jones admitted creating over £70,000 worth of work which had supposedly been done by her labourer husband.

She also pleaded guilty to conspiring with the head teacher to defraud Sandwell Council which funds Annie Lennard Primary. She was also convicted of two further charges of conspiring to defraud with other workmen.

Hollingsworth was found guilty of conspiring to defraud with five other people and an attempt to pervert the course of justice by trying to get one of those involved – carpenter Robert McKeown – to take all the blame for his involvement in their deal that involved payment for non-existent work that ran up a further £40,000 loss for the school.

McKeown, aged 35 from Hednesford, pleaded guilty and gave evidence against the head teacher at her trial. He received a six month jail sentence suspended for two years with 120 hours unpaid work.

Sports teacher Nathan Cooper, aged 28, from Cannock, who was convicted of conspiring with Jones and Mrs Hollingsworth to defraud the school and Sandwell Council out of at least £17,000 was given a 14 month prison term suspended for two years with 120 hours unpaid work.

Kitchen fitter Stephen Roberts from Great Saredon, Shareshill aged 60, was found guilty of being involved in the conspiracy with the head teacher during which he laundered money for her – got nine months jail suspended for two years with 120 hours unpaid work.

Michael Dewsbury, aged 54, who lives next door to the Hollingsworth family, was convicted of conspiring to pervert the course of justice, was given a three month prison sentence suspended for 18 months and ordered to do 120 hours unpaid work and pay £10,000 costs.