Britons in their fifties and early sixties won’t be eligible for flu jabs this winter, as health chiefs stick to their ‘reckless’ decision to cut back the vaccination scheme.

A record 35million people were offered the jab over the last two winters amid fears about a double-whammy of Covid and influenza outbreaks.

But the NHS announced last month that it was shrinking the programme back to pre-pandemic levels, with 10million fewer people set to be eligible.

A source close to the rollout said the decision was ‘extremely reckless’ because the next pandemic ‘might be caused by the influenza virus’.

Despite the backlash, the Department of Health today confirmed the newly eligible groups will no longer receive the jab for free through the NHS.

Experts today told MailOnline the move is ‘short-sighted’ and said they feared it could mean the Covid autumn booster rollout will also exclude 50 to 64-year-olds. 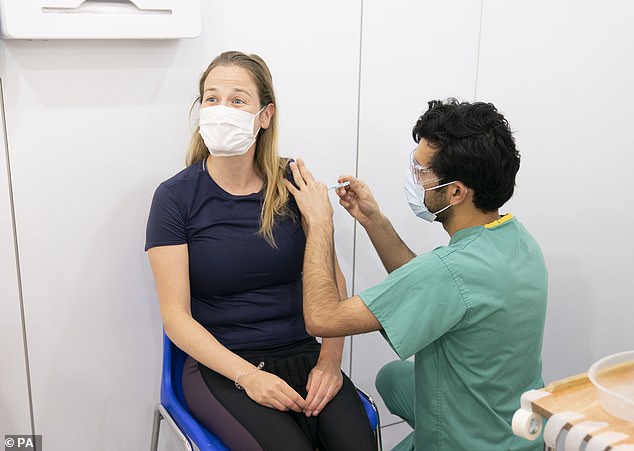 A record 35million people were offered the jab over the last two winters amid fears the UK could face one of the worst flu seasons in history. Pictured: Kayleigh Kitson at a Covid vaccination centre at Elland Road in Leeds in December

Face masks, social distancing and travel ban rules brought in during the Covid crisis to control the spread of the virus also drove flu rates to historic lows around the world.

But experts have warned cases could soar to all-time highs as social mixing returns to pre-pandemic norms.

A letter to health bosses from the Department of Health, NHS England and UK Health Security Agency today confirmed 50 to 64-year-olds and 11 to 15-year-olds will not get flu jabs on the NHS as they have done over the last two winters.

Margaret Keenan, the first person in the world to receive an approved Covid jab, today received her spring booster.

The grandmother-of-four, who likes to be called Maggie, is one of the 2million Britons who have so far come forward for the latest dose.

Ms Keenan, 91, made history on December 8 2020 when she received a Pfizer dose at University Hospital Coventry in Warwickshire.

More than 121million Covid jabs have been dished out since then, with health experts estimated around 186,0000 hospitalisations thousands of fatalities have been prevented.

Ms Keenan, a former jewellery shop assistant who only retired five years ago, said she was ‘delighted’ to get her latest vaccine jab and encouraged others to do the same.

She said: ‘I am really pleased to get my Spring Booster and feel I will be better protected against Covid as a result.

‘Now we are all out and about, it is even more important for older people to keep up with all their vaccine doses and I would encourage anyone aged 75 and over to book their vaccine now.’

She added: ‘I am delighted that today, Maggie has received her extra dose of protection against the virus.

‘When it is your turn to get vaccinated, follow in Maggie’s footsteps and get your spring jab – the NHS has worked hard to ensure that people can easily get their vaccination and it remains the best way to protect yourself and those around you from the virus.’

This is despite the health agencies noting that ‘there is likely to be a resurgence in influenza activity in winter 2022 to 2023 to levels similar to or higher than before the pandemic’.

It also noted ‘a late increase’ in flu cases in the coming months ‘cannot be ruled out’.

And co-circulation of Covid and flu, along with other respiratory viruses, could ‘add substantially to pressures in the NHS’.

Carers, close contacts of immunocompromised people and frontline health and social care workers are also able to get the vaccine.

The recommendation is based on advice from the Joint Committee on Vaccination and Immunisations (JCVI), provides ‘direct protection’ to those most at risk from flu and will reduce fatalities in this cohort.

But the letter justifies excluding 50 to 64-year-olds, saying: ‘The programme aims to provide direct protection to those who are at higher risk of influenza associated morbidity and mortality.’

It adds: ‘We will continue to keep the JCVI’s advice for the influenza vaccination programme under review, but for winter 2022 to 2023 those aged 50 to 64 years will not be offered a free influenza vaccine through the NHS.’

Even though the JCVI called for all under-16s to be given the jab, ‘this will not be taken forward’ for the upcoming winter, health bosses said.

It is unclear how much money is being saved by scaling down the programme.

Four million secondary school children will no longer be eligible for the free shots and neither will around 6million people aged 50 to 64.

Those within those age groups who still want to get vaccinated against flu will need to pay up to £14.50 for a shot this year.

The decision comes despite the JCVI keen to maintain the expanded rollout.

Nearly half (45.7 per cent) of healthy 50 to 64-year-olds came forward for the flu jab last autumn, only slightly less than those in a clinical risk group (52.9 per cent) who are encouraged to get vaccinated every year.

A record 35million invites were sent out this winter — compared to 25million pre-Covid.

The health agencies said higher than usual uptake has likely been due to pandemic concerns and increased awareness of how vaccines prevent illness.

The letter orders GP surgeries and schools to offer the flu jab to every single person eligible for one to at least match uptake from the last two years and ‘ideally exceed them’. 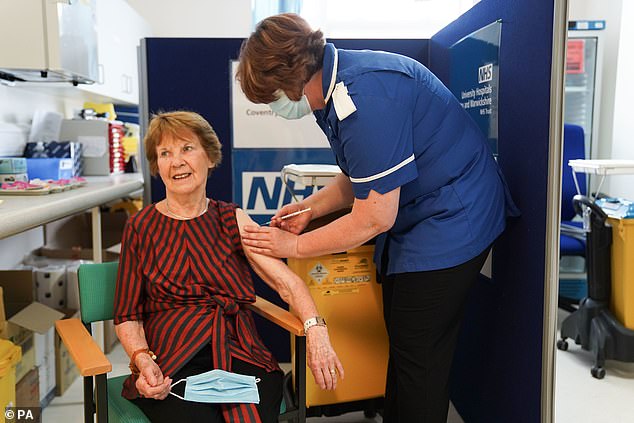 Margaret Keenan, the first person in the world to receive an approved Covid jab, today received her spring booster

It also urges pharmacies to ‘proactively offer’ the flu vaccine to every eligible patient who visit their shop.

One source working with the rollout told The Telegraph last month that there were concerns the decisions appeared to be financially driven.

He said: ‘Given that the next pandemic might be caused by the influenza virus it seems extremely reckless to cut the flu vaccine programme.’

Dennis Reed, the director of Silver Voices, a campaign group for the over-60s, told MailOnline not offering 50 to 64-year-olds the vaccine is ‘really short-sighted’ because there is likely low immunity among the cohort.

‘My guess is the decision is just economics to reduce the public spend on vaccines, probably with the Treasury instructing the Department of Health to cut back on the vaccine programme,’ he said.

The cohort will likely remain unprotected against influenza and ‘not even think about’ privately paying for the jab as they have ‘always relied on the NHS for vaccinations’, Mr Reed said.

He said the move raises questions about whether the group will be included in the autumn Covid booster programme as a combined flu and Covid vaccine was being considered.

‘Has that been dropped or why are they not being included in the fourth vaccine rollout, which would be serious as far as we are concerned,’ Mr Reed said.

A British taxpayer-funded vaccine manufacturing centre was supposed to be looking into combining the jabs, but it was bought by a US pharmaceutical giant earlier this month.

And Novavax this week revealed that its combined Covid and flu jab is ‘safe and effective’.

During the booster rollout last autumn, Britons were offered both a Covid and flu shot at the same time in different arms.

A Department of Health and Social Care spokesperson said: ‘Thanks to the success of the Covid vaccination programme and treatments available to individuals most at risk, we are now able to live with this virus and it is right that we return our other vaccination programmes such as flu back to pre-pandemic levels.

‘We are incredibly grateful to all the staff across health and social care who played their part in the successful flu campaign over the last year.’