With shows like Love Island littered with bikini-clad young women with enviable figures, it’s hard not to become judgmental of our own bodies.

If we’re honest, many of us would admit to dreaming of changing a certain physical characteristic, whether that’s boosting our bust or adding a few abs to our stomach.

But according to Harri Rose, a health coach and mindfulness facilitator who specialises in ‘unapologetic body acceptance’, this attitude can have a very damaging impact on our mental health.

Harri teaches her clients how to love their bodies, find more self-compassion and discover what food and movement makes them feel good.

She has recently released her first book, appropriately titled You Are Enough. Here she discusses one of its key themes with FEMAIL, and reveals how to ‘let go’ of that fantasy body dream in eight steps…

Harri Rose teaches her clients how to love their bodies, find more self-compassion and discover what food and movement makes them feel good

If I had a magic wand and told you that I could change a part of your body (or even your whole body), I’ll bet you wouldn’t miss a beat in telling me which part you’d want to change.

In my job as a body acceptance coach, I meet people every day who tell me how much they hate their body and wish they looked different. The dislike they have is often fueled by ‘the fantasy body’.

The achievement of reaching your ‘dream body’? All your problems will disappear! You’ll never have to diet again, you’ll have all the hot sex you could wish for and you’ll finally be happy, healthy – glowing even.

How to visualise the loss of the ‘fantasy body’

This exercise needs a pen, paper and some time when you can use your imagination. Carve out 15-10 minutes and revisit the visualisation as often as you like. You can even do it in two parts – the lists and then the visualisation.

Step one: Write a list of five things you’ve been holding yourself back from doing because of your body hang-ups or because you haven’t got your dream body yet.

Think about how your life would change if you could let go of this fantasy goal.

Step two: Next, write five things you would like to do more of if you could embrace the body you have right now (baby rolls and all).

Step three: Now you’ve got your two lists – one list is what you’re moving away from and one list is what you’re moving toward. Time to let go of the fantasy body. I know, it’s kinda painful. It may be emotional, but don’t forget what we’ve learned so far. It doesn’t mean giving up on being happy, fit and healthy. It’s just about ridding yourself of a vision of yourself that’s likely unrealistic and makes you feel bad.

Step six: Say goodbye to the fantasy (blow her a kiss as you make her disappear) because the joy you feel in yourself in this technicolour reality is way, way better. Smile, actually, because you’ve found ways to feel happy and healthy that don’t involve the guilt and shame that the old fantasy body used to give you.

Step seven: When you’re ready, come back into the space and write a few notes about the feeling. Use this visualisation to motivate you further on this path.

Step eight: Whatever comes up, no judgement. It’s all part of the healing. Do everything with curiosity and compassion. Stop as much as you need. And explore how it feels to show yourself some kindness. 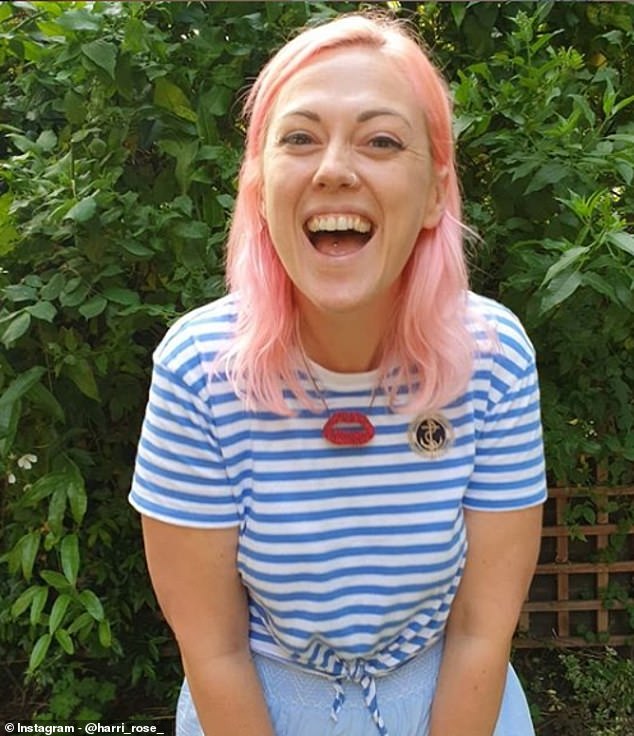 Maybe you spent weeks ogling the Love Island contestants fantasising that one day you’ll be that toned, sculpted or abs’y.

You definitely aren’t the only one, given its millions of viewers, but how good for our mental health is it to continuously hold up a different, and often unobtainable, body as something to aim for?

We live in a beauty-obsessed society where having ‘the perfect body’ is seemingly the most important thing about you (spoiler: it’s not). We can coin this obsession with thinness and fear of fat as ‘diet culture’, which is a catch all term for anything trying to sell us the idea that there’s one correct way to have a body.

At the moment, our social zeitgeist paints an one-sided picture of worth that puts a white, thin, feminine and cisgendered body at the top of the hierarchy. 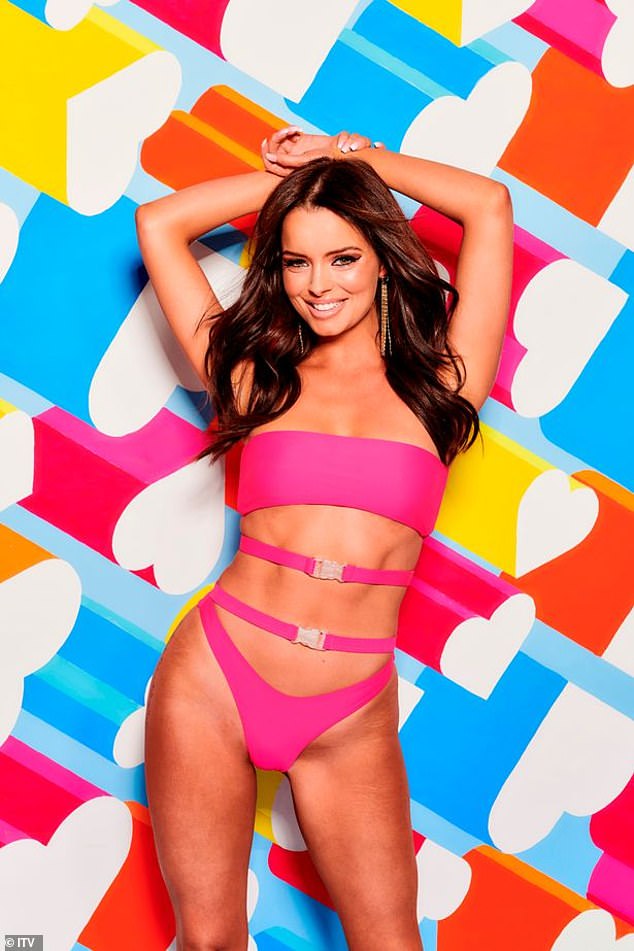 Harri pointed out millions of viewers who tuned into Love Island may have found themselves  ogling the contestants and fantasising that one day they’ll be that toned. Pictured: Maura Higgins

Body trends change over time, so while women in the 90’s where striving for ‘heroin chic’, today we’re all squatting for days and plumping our lips to the max, thanks to the Kardashians. The body goal posts are always moving, but we think it’s our fault we can’t reach body nirvana.

Diet culture isn’t just in the media, diet industry, cosmetic industry and beauty industry – it’s also in our schools, places of work and homes because it permeates into every aspect of our everyday conversation.

We have normalised body judgement and we are socialised to criticise not only other people’s bodies (fatphobia is a real and awful reality for many) but also, our own body too.

Give yourself a break if you’ve been beating yourself up about your appearance – it’s really not your fault. Every day we’re bombarded with messages that tell us our bodies are not good enough and that if we could only follow the rules then we’d be able to achieve the body of our dreams (abs, thigh gap, you name it).

But there’s a mounting body of science and millions of personal dieting failure stories, that say diets don’t work (Let’s be honest, if they did, we’d all look like Love Island contestants). They mess up our internal systems of balance, create a fixation about food and shrink our worth to a number. 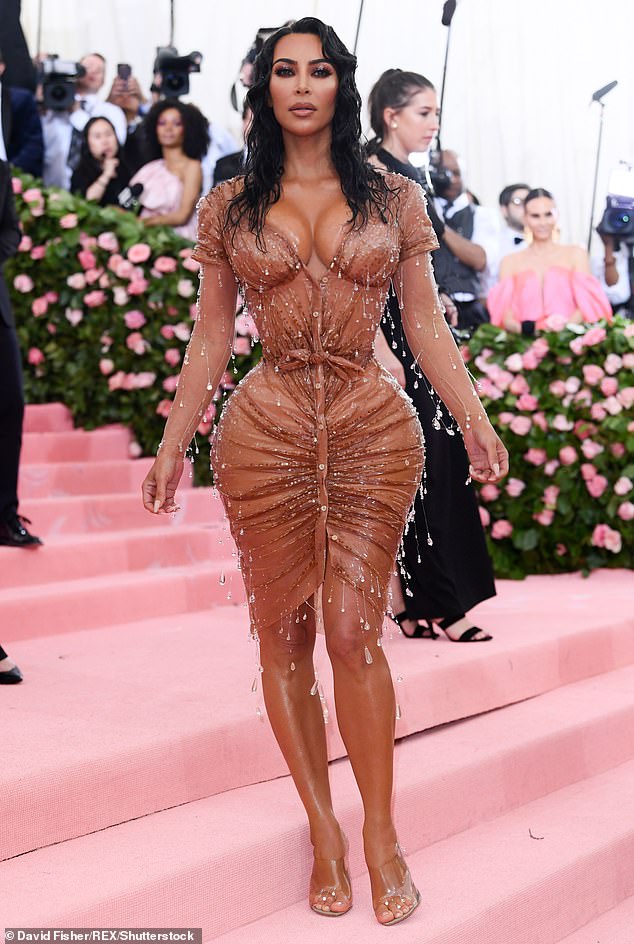 Today we’re all squatting for days and plumping our lips to the max, thanks to the Kardashians – according to Harri (pictured: Kim Kardashian at the Costume Institute Benefit in May)

The problem with reality TV is that the contestants are held up as ‘normal people’ which we can aspire to be like. However, Love Island is doing anything but holding up a realistic interpretation of body diversity with its array of models, personal trainers and social media influencers who have spent months preening themselves into perfection for our entertainment (who has the time for that IRL?!)

If your feed is full of ‘before and after’ transformation photos then it’s normal to be thinking ‘why can’t I get a body just like that too?’ But rarely do we ever see the ‘after’ photo taken 18 months later when statistically, that person is likely to have put the weight back on – plus more. 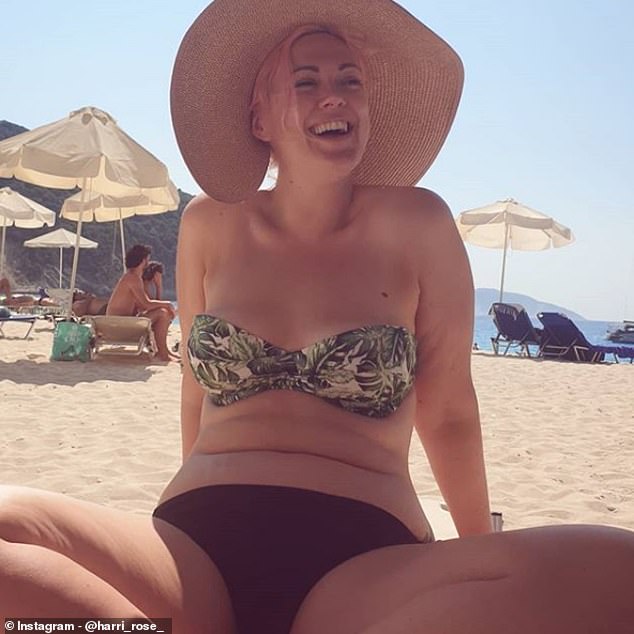 Harri, pictured, suggests many of the photos shared by influencers and models on Instagram are ‘filtered to f***’

We think we’re using our ‘fantasy body’ or hashtags like #strongnotskinny as motivation, but what many of us don’t realise is that they’re actually making us feel bad about ourselves.

The Mental Health Foundation recently reported that body anxiety in young people is being fueled by reality TV. According to the YouGov survey of 4,505 UK adults released by the foundation in June this year, almost one in four people (24 per cent) aged 18-24 say reality TV makes them worry about their body image.

This is so saddening when there really is no right or wrong way to have a body.

The key to feeling good in your body long term is to let it go of any fantasy you’re holding on to and accept the skin you’re in. Easier said than done though, right?

Letting go of a future imagined body is hard. There’s a misconception that if you let go of diet rules, you’ll sit on the sofa eating all day and have to winched out of your house. This is not true. It also doesn’t mean you and your body will never change.

Acceptance isn’t the end of happiness. It’s the start of freedom.

Just think about how much brain space wishing you looked different is taking up. Imagine having all the freedom to eat what you want, wear what you want, live how you want – and not giving a single precious f*** about what anyone else thinks of you.

That is true freedom. Breaking free from societal expectations that you need to be thin to be happy – that’s real joy. 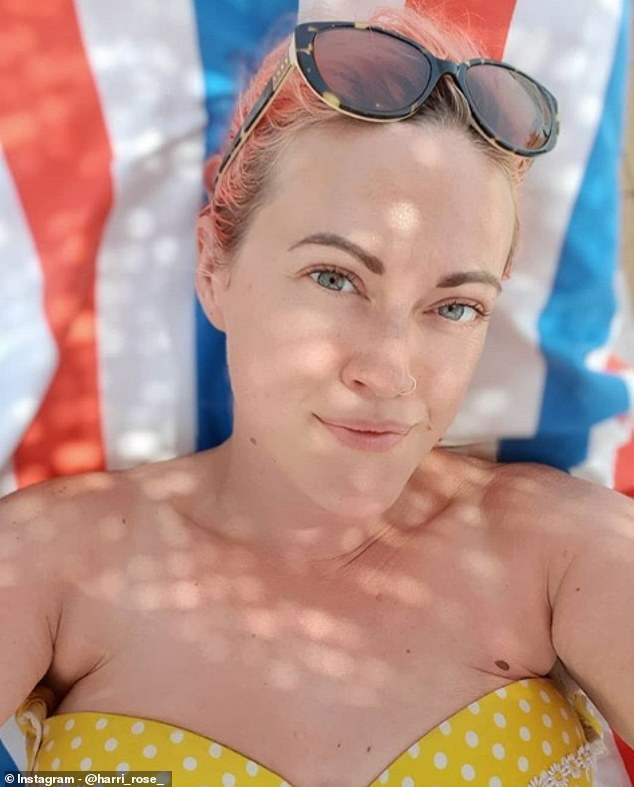 Letting go can be painful, full of despair and loss of hope. However it’s important to acknowledge this as part of the process. The fantasy body you have in your mind is made up of unrealistic ideals that are incredibly hard to achieve. In truth, the body you have now is more than worthy of love, kindness and acceptance.

This body is the only one you’ll ever have. You may as well learn to be friends with it, right?! 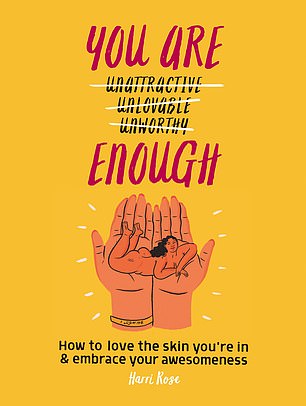 Harri’s first book ‘You Are Enough’ is out now

When you can learn to be kind to yourself, it’s much, much easier to learn to eat and move in a way that makes you feel good – without the guilt, dread and sorrow of weight loss being your prime motivation.

You are also so much more than your body! You are your hopes, dreams, ambitions and weird party tricks. You don’t love your bestie for how sculpted their calves are – you love them for all the ways they’ve almost made you pee yourself with laughter over the years.

It’s only diet culture that makes us feel that our worth is in our appearance and that there’s only one way to be beautiful. I call BS.

It’s time to realise how damaging the fantasy is on our mental health and let it go. Watch the language you’re using about your body to yourself and with your friends. Unfollow anything that makes you feel like c***. And show gratitude for the incredible shell you live in, that’s doing its best to keep you alive. How magical is that?

Harri’s first book ‘You Are Enough’ is out now on Octopus publishing (£9.99). For more information, follow her on Instagram.