Powerful, highly addictive painkillers will have to carry warnings under a new Government crackdown.

Health Secretary Matt Hancock unveils plans for the measure today in a bid to prevent a US-style epidemic of people hooked on ‘opioids’ – drugs derived from opium.

It follows a huge increase in the use of the drugs here, with opioid prescriptions soaring by 60 per cent in the past ten years.

Under the new plans, all such medications will now have to carry a clear warning on their labels, stating that they can cause addiction and contain opioids.

As well as prescription-only medicines that contain opioids, over-the-counter codeine-based painkillers must also carry the warning under the measure.

Mr Hancock said today that painkillers were a ‘major breakthrough in modern medicine’ and were ‘hugely important’ in helping people manage pain.

But he voiced alarm at the recent rise in the number of people becoming addicted to them.

The Health Secretary said: ‘We know that too much of any painkiller can damage your health, and some opioids are highly addictive and can ruin lives like an illegal drug.

‘Things are not as bad here as in America but we must act now to protect people from the darker side to painkillers. 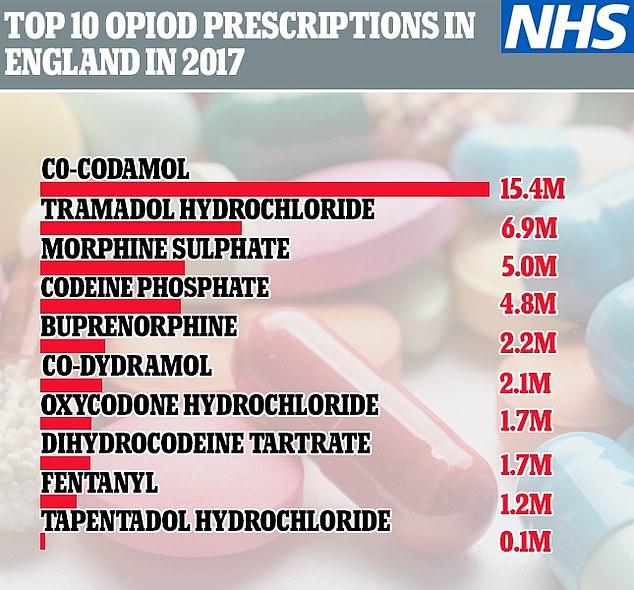 ‘We need to place a greater focus on making sure that these medicines are used appropriately and for pain management alone, and make sure people are fully aware of the risks.’

Figures show that, in the past decade, the number of prescriptions of opioid painkillers dispensed across England and Wales outside hospital treatment has increased from 14 million in 2008 to 23 million last year. At the same time, the number of codeine-related deaths more than doubled.

According to official figures, 11,500 people are admitted to hospital a year for overdosing on opioids.

Professor Dame Sally Davies, Chief Medical Officer for England, said: ‘I am delighted to see measures put in place to raise awareness of the risks of codeine and prescribed drugs.

‘It is vital that anyone who is prescribed strong painkillers takes them only as long as they are suffering from serious pain.

‘As soon as the pain starts to alleviate, the drugs have done their job, and it is important to switch to over-the-counter medication such as paracetamol which do not carry the same risk of addiction that comes with long-term use.’

Public Health England is already undertaking a review into prescription medication addiction, due to be released later this year.

Last week, US President Donald Trump admitted the US had a ‘big problem’ with its opioid epidemic but claimed ‘we’re handling it’.