A dramatic shootout between police and a man who led them on a high-speed chase has been captured on security cameras.

The footage was taken on Wednesday as the driver tried to evade authorities in the small Bay of Plenty township Te Teko, 300km southeast of Auckland.

It shows several police vehicles tailing behind the man’s car before he sudden open’s the driver door and begins shooting towards them.

His car rolls to a halt and he jumps out, firing at police as he runs towards another a vehicle parked on the opposite side of the road.

He lunges into the car, dropping his gun as police gunfire shatters its rear window.

The man manages to start the stolen car and drives off with police in hot pursuit.

The saga unfolded at 11.25am when the man fled a Kawerau property in a vehicle while police were searching the place, the NZ Herald reports.

Officers took chase, and spikes were deployed but the driver continued on State Highway 34 towards Te Teko, 11km away.

Once he took of in the getaway vehicle at Te Teko, he headed to Awakeri, but didn’t get far before he came back towards Kawerau again.

A witness in Kawerau said the man rammed into a police car in front of a row of shops, nearly ran over elderly people including one man who was knocked off his mobility scooter.

Police officers eventually forced the vehicle to stop and the 28-year-old man fled.

He was later arrested and charged with dangerous driving, unlawful possession of a firearm, failing to stop, using a firearm against police, and unlawfully taking a motor vehicle.

The Independent Police Conduct Authority has notified because police firearms were discharge.

Investigations into the incident continue. 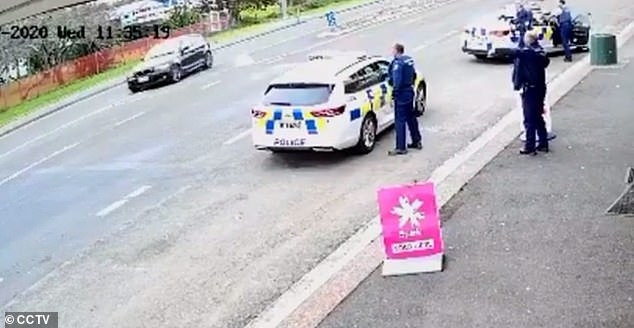 He said it was the loud noise of the first car driving on its rims after the tyres separated that alerted people in the shop to the incident.

‘There were no tyres left on the car,’ he said.

‘He stopped at the intersection of Te Teko Rd, jumped out and started shooting at the cops. At that stage, there was a car parked outside, one of the locals.

‘He saw the car and went into it, police shot I think three rounds at him.’