These heartbreaking images show a severely injured seal being strangled by plastic waste on a beach.

The young animal was pictured in Pembrokeshire, southwest Wales, with plastic fishing netting tangled around its neck.

The images were captured by Sharon Lawrence who said she was ‘heartbroken’ to see the seal in such distress.

This seal was found on a beach in Pembrokeshire, Wales, with fishing netting wrapped around its neck

She said: ‘When I got home (as there’s no mobile phone signal at Strumble) I got advice as to who to contact from the Strumble Head Seawatching Facebook page and rang the Sea Trust to inform them.

‘They said that they would pass on the information to their ‘seal guy’ and hopefully get some help for him on the next low tide.

‘It was heartbreaking to see the injuries that the plastic netting had caused. The poor seal kept raising his flipper to his neck – he must have been in a lot of pain. 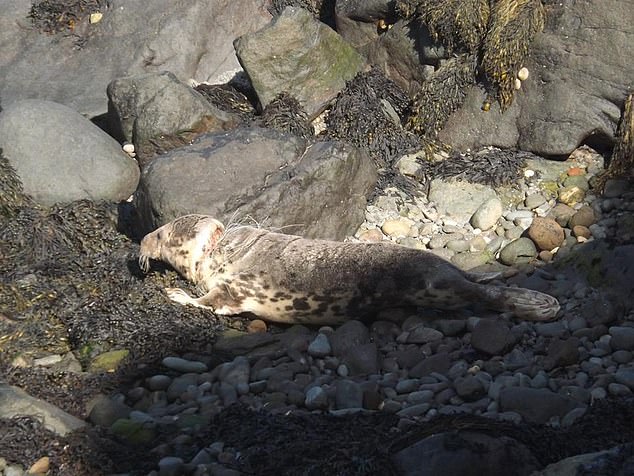 ‘It appeared that in this instance it was caused by some plastic fishing netting, but something like this can happen with all types of rubbish and plastic that is thrown away.

‘I hope that people are starting to realise the actual impact of these thoughtless acts.’

Ms Lawrence found the pup at around 1.30pm on Friday.