Hurricane Irma’s full-forced winds and rainfall are expected to hit south Florida this weekend forcing hospitals and care homes to scramble to protect their patients.

More than 1.4million people in Florida and Georgia have been forced to evacuate so far due to the impending storms.

This includes hospitals and care homes who have patients that need around-the-clock care.

To prepare, hospitals in the Keys have been discharging patients that aren’t as serious and evacuating others to areas such as north Florida, North Carolina and Georgia,

Miami is one of the cities with the most concern as it will be hit right in the center of the category 4 storm.

This forced Mercy Hospital in Miami to start evacuating more than 200 patients to areas in the north of Florida and close its emergency room.

Other hospitals are remaining open with more than two weeks of supplies available to get them through the storm.

Nursing homes have also been advised to have prepared at least seven to 10 days worth of drugs and supplies for each patient in case a need to evacuate occurs.

But people in the state of Florida are worried that this might not be enough to protect those who are elderly or chronically ill from the damage of the storm.

Hospitals and care homes in counties such as Monroe, Miami-Dade and Broward have been forced to evacuate their patients to areas in north Florida, Georgia and North Carolina in anticipation of the storm. Hurricane Irma is expected to hit Florida this weekend

Some hospitals close their doors for safety

Many hospitals in the Florida Keys and Miami are taking precautions such as closing their doors and evacuating patients to higher ground.

This is in anticipation of the hurricane that will hit the lower half of Florida with hard wind and rain to cause significant damage.

How one Texas hospital go patients out during Hurricane Harvey

Baptist Beaumont in Beaumont, Texas, was forced to transport its 243 patients after the water pump in the city failed.

The hospital evacuated and canceled all of its services.

This required firefighters and emergency medical technicians to help transport all of the patients safety to other areas.

Ambuses (bus-sized ambulances) and ambulances traveled from Weslaco, Texas, to transport all 243 patients to hospitals around the state, including some in Houston.

Some patients even ended up in Louisiana to receive the care they needed.

The hospital was able to find a place for everyone during Hurricane Harvey.

It started admitting patients again on Tuesday after a back-up water system was installed in the hospital.

But prior to the closures, hospitals also experienced an increase in patients from people getting injured.

Wayne Brackin, executive vice president and chief operating officer of Baptist Health South Florida, told to CNN that a lot of people have gotten injured while preparing their homes for the hurricane.

‘People fall off ladders; they cut themselves; they break bones,’ he said.

The seriously ill are the patients hospitals are most concerned about because they aren’t healthy enough to be discharged.

Hospitals in Monroe County, which includes the Keys, has been evacuating patients to north Florida, North Caroline and Georgia.

Lower Keys Medical Center even got help from the North Carolina National Guard to help evacuate its patients.

Some patients have also been evacuated to Baptist Hospital of Miami. This hospital is staying open for emergencies and patients who are too ill to be discharged.

But it is prepared for the storm with more than two weeks of food and supplies to survive if need be.

The hospitals in southern Florida have also been busy putting shutters on windows, picking up supplies, loading up on food and making sure generators are working.

Mercy Hospital in Miami is one hospital that is shutting down its operation in anticipation of the storm.

They have evacuated more than 200 patients and are closing their emergency room as a precaution.

But even these precautions might not be enough. While the hospitals in Florida are more used to storms like Irma than other states, there hasn’t been one quite like this.

With winds at 185mph, hospitals and other facilities could be in trouble for this coming weekend. 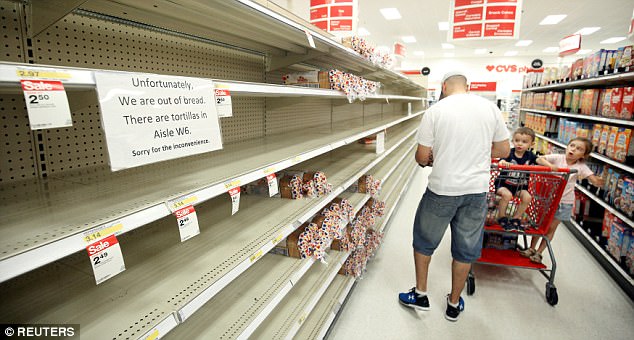 Stores across Florida have been wiped out as people anticipate the storm. Hospitals and care homes have increased the amount of food and medication they have in order to provide the best care for their patients. This is a store in Kissimmee, Florida on Friday

Florida has the largest elderly population with more than 19 percent over the age of 65.

And a study in 2009 revealed that 60 percent of the deaths in Hurricane Katrina were of people who were 65 years and older.

Elderly people are a concern during natural disasters because they are more likely to have a chronic illness and a need for medications or medical supplies.

They also are more likely to suffer from memory impairments, frailness and limited mobility.

Most Florida nursing and care homes are hunkered down in anticipation of Irma if that county has not been ordered to evacuate.

Each facility, whether it is evacuated or not, is required to prepare at least seven to 10 days worth of supplies and medication for every resident.

This is to help get them out quickly if an evacuation is required.

Other retirement communities, such as Shell Point in south Florida, have hurricane shelters that are prepared to be used if the storm gets bad enough.

Children and adults with chronic illnesses

Living with a child or adult who has a chronic illness can cause a lot of problems during an emergency evacuation.

These chronic illnesses require medication, supplies and special conditions that can be hard to achieve when traveling away from the home.

Some hospitals such as Arnold Palmer Hospital for Children in Orlando, Florida, released a guide to how to prepare for an evacuation due to a natural disaster.

It is recommended to prepare at least one weeks of medication if you are anticipating being evacuated from your home.

The hospital also advises for people to load up on gas, food and other necessary equipment in case they are trapped somewhere.

Extra batteries are necessary if there is any medical equipment that needs energy in order to stay functioning.

If a child or adult has a serious illness that requires immediate medical attention, it is recommended to go to the nearest emergency room or medical shelter that is open.

Hurricanes cause not only an extreme amount of damage during  but can also be damaging to the health after it is done.

Officials have warned people to be careful when returning to their homes to help avoid these risks.

The floodwater combines with sewage, chemicals and other diseases to make it very dangerous for anyone.

People need to avoid ingesting food or drinks that have touched the water because it could cause a serious illness.

Also, toys and items that come in contact with the floodwater should be sterilized or thrown out.

These bugs love floodwater once it has stopped storming because it is the perfect breeding ground.

People need to wear bug spray when returning home to help protect themselves against mosquito-borne diseases that carry from their bite.

Natural disasters can be damaging on a person’s mental health.

It is hard to see all of your personal possessions getting destroyed and having to build again.

Researchers have noticed an increase in people suffering from depression or PTSD after natural disasters like hurricanes.