Idaho cops still have no suspects in quadruple-slaying of students

Police in Idaho say they still have no viable suspects in the massacre of four University of Idaho students in their home last month, while the two roommates who survived the attack have spoken out in gut-wrenching statements.

Killed in the November 13 stabbing attack in their off-campus home were: Kaylee Goncalves, 21, Maddie Mogen, 21, Xana Kernodle, 20 and Ethan Chapin, 20.

In a statement on Saturday, the Moscow Police Department said it had received thousands of tips, but that ‘at this time, no suspect has been identified.’

Local cops and Moscow Police Chief James Fry have faced sharp criticism in recent days, including from the families of the victims, over the lack of apparent progress in the case.

In the new statement, the department said that ‘only vetted information that does not hinder the investigation will be released to the public.’

‘There is speculation, without factual backing, stoking community fears and spreading false information,’ the statement added.

Survivors Dylan Mortensen (left) and Bethany Funke (right) have broken their silence on Friday in heartbreaking statements after the murder of their four friends: Kaylee Goncalves, Madison Mogen (on Kaylee’s shoulders), Ethan Chapin, and Xana Kernodle 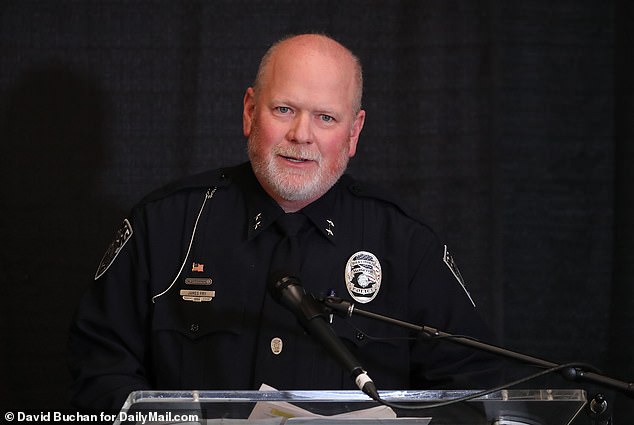 Moscow Police Chief James Fry is seen. Police in Idaho say they still have no viable suspects in the massacre of four University of Idaho students in their home last month

The department said it has received 2,645 email tips and more than 2,770 calls to the tip hotline, as well as 1,084 digital media submissions to the FBI.

Investigators are poring over 113 pieces of physical evidence and about 4,000 crime scene photographs, the department said.

Meanwhile, survivors Dylan Mortensen and Bethany Funke, who were asleep on the first floor of the home as the killings unfolded on the upper floors, broke their silence in heartbreaking statements, which were read aloud by a pastor at Real Life Ministries on Friday.

Mortensen wrote touching tributes to her friends, saying that Kernodle and Chapin, who were a couple, were ‘the two best friends but perfect pair together.’

‘They had this unstoppable, loving relationship. They both would look at each other with so much love. Everyone knew they were the perfect duo,’ she wrote.

‘They both had this fun, passionate, crazy but good energy. They both were the kind of people who cared about everyone and would help anyone.’

She went on to describe Mogen and Goncalves as ‘an inseparable duo’ who were ‘like second moms to me.’

In her own statement, Funke said she wished she could give each of her roommates ‘one last hug’ and tell them how much she ‘loved them.’

‘You always told me that everything happens for a reason, but I’m having a really hard time trying to understand the reason for this,’ Funke wrote, addressing her slain roommate Mogen.

The Moscow Police Department has not yet named a suspect or made any arrests.

Investigators have also not yet found a weapon, the department wrote in a news release Wednesday.

All four victims were friends and members of the university’s Greek system.

Xana Kernodle, 20, was a junior studying marketing. She was from Post Falls, Idaho, and joined the Pi Beta Phi sorority on campus. She lived at the rental home with the other two women who were stabbed, and she was dating Ethan Chapin, who was visiting the night of the killings.

Chapin, also 20, was from Mount Vernon, Washington and was a triplet. His brother and sister also attend UI, and both Chapin and his brother were members of the Sigma Chi fraternity.

Kaylee Goncalves and Madison Mogen were both 21 and friends who grew up together in northern Idaho. Mogen worked with Kernodle at a local Greek restaurant in Moscow. She was also a member of Pi Beta Phi.

Goncalves was a senior majoring in general studies, a member of the Alpha Phi sorority and was planning a trip to Europe next year.

Police have released statements revealing the movements of the victims on the night of the killing, in a plea for any information from the public. 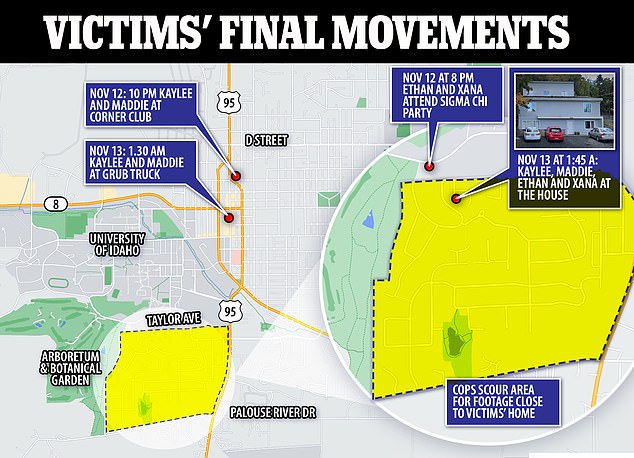 Goncalves and Mogen went to a local bar, stopped at a food truck and then caught a ride home with a private party around 1.56am, according to a police timeline of the evening.

Chapin and Kernodle were at the Sigma Chi house – just a short walk away – and returned to Kernodle’s house around 1.45am, police said.

Two other roommates who live in the home were also out that evening, but returned home by 1am, police said. They didn’t wake up until later that morning.

After they woke up, they called friends to come to the house because they believed one of the victims found on the second floor had passed out and wasn’t waking up.

At 11.58am, someone inside the home called 911, using a roommate’s cell phone. Multiple people talked with the dispatcher before police arrived.

Police found two of the victims on the second floor of the three-story home, and two on the third floor. A dog was also at the home, unharmed.

Autopsies showed the four were all likely asleep when they were attacked, some had defensive wounds and each was stabbed multiple times. There was no sign of sexual assault, police said. 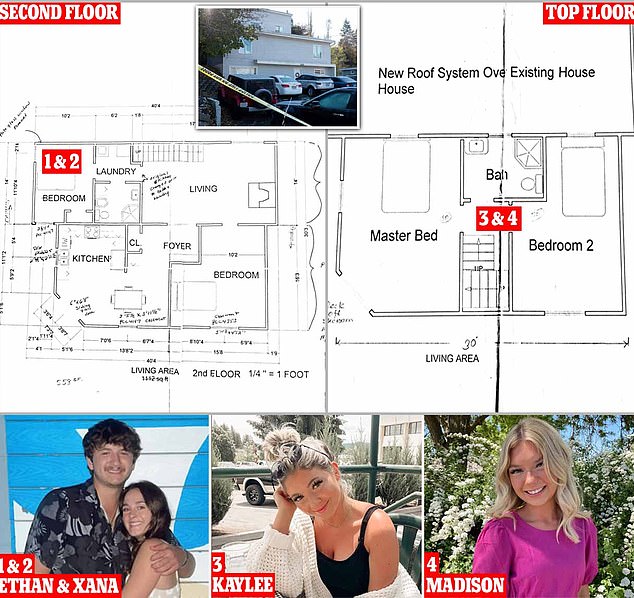 Before Steve Goncalves said Wednesday that his daughter Kaylee died in the same bed as Maddie, this is where it was believed the college students had died – however it is still not know which bedroom on the top floor they were in 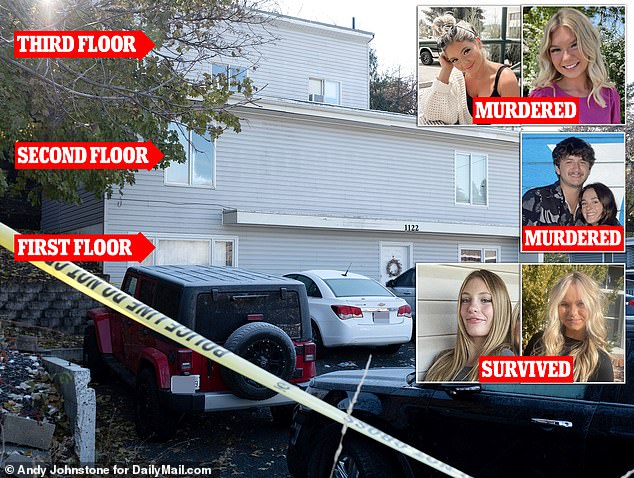 On Wednesday night, detectives revealed they were not sure if the slain University of Idaho students were targeted by the killer, contradicting Chief James Fry who previously insisted they were.

‘We believe they’re targeted because we take a totality of all the circumstances we’re looking at,’ Fry had told reporters on November 20, a week after the murders. The statement was recently echoed by Latah County prosecutor Bill Thompson.

But the department has since filed a correction, stating: ‘Detectives do not currently know if the residence or any occupants were specifically targeted but continue to investigate.’

Nearly three weeks after the grizzly murders, few answers have come out despite the father of one of the victims stating that the killer was ‘sloppy’ and left a ‘mess’ of evidence behind.

Anyone with information about the murders is urged to contact the Moscow Police tip line at 208-883-7180.