Wildlife campaigners have filmed the ‘inhumane and callous killing’ of a rare bird of prey on one of Britain’s most iconic grouse shooting moors owned by the Queen.

The ‘Ban Bloodsports on Yorkshire’s Moors’ group released footage of a rare goshawk being illegally killed after being trapped in a cage in North Yorkshire.

The campaigners captured the scenes with an undercover camera after a tip-off at the Duchy of Lancaster’s Goathland Estate in May.

The video shows a masked man releasing the goshawk into a cage trap and then appearing to deliberately kill it, before removing the body in a bag.

Goshawks were nearly extinct as a breeding bird in the UK by the end of the 19th century, but they were reintroduced and there are now estimated to be about 500.

Police have questioned three people under caution in connection with the incident and they have had their gamekeeper licences suspended while inquiries continue.

Luke Steele, 30, a spokesman for Ban Bloodsports on Yorkshire’s Moors, said the killing ‘shames Yorkshire’ and called for more stringent regulations against the sport.

How there are just 500 goshawks left in the UK

They can hunt at high speed thanks to their broad wings, while their long legs and talons can catch prey in flight. 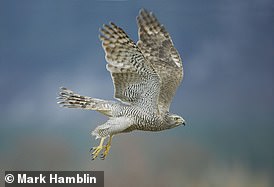 Goshawks were nearly extinct as a breeding bird in the UK by the end of the 19th century, but they were reintroduced and there are now estimated to be about 500.

Mr Steele, from Leeds, said: ‘The video is disgusting and inhumane, and just shows how deeply ingrained bird of prey persecution is on grouse moors.

‘Not even the Queen’s wildlife is safe from criminals illegally destroying it to boost game bird populations for shooting.

‘These birds are being decimated, the wildlife and environment is being completely destroyed and left like a wasteland to allow these people to shoot for sport.

‘We need to save these animals and save our environment. These vile actions are antiquated and Victorian, and I would suggest to these people to get with the times.

‘Things have to change. We cannot allow these callous actions to destroy our wildlife in Yorkshire. It shames Yorkshire and it’s unacceptable.’

The illegal persecution of birds of prey on moorland managed for grouse shooting is still a major issue more than 60 years after laws were passed making it illegal.

‘These are senseless killings and they need to stop.’

Despite the game shooting industry pledging in January to exercise better self-regulation, a number of attacks associated with grouse moors have been reported over the spring and summer by police forces across northern England.

This includes five dead buzzards – four of which had been shot – discovered hidden in a hole on Bransdale Moor in April – a poisoned buzzard in Nidderdale in March and a buzzard found shot on Saddleworth Moor in May. 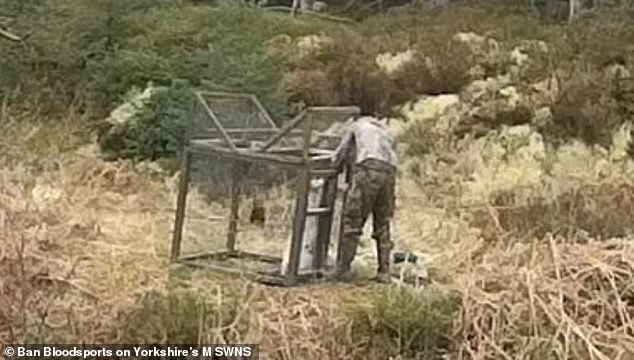 The video shows a masked man releasing the goshawk into a cage trap and then appearing to deliberately kill it, before removing the body in a bag 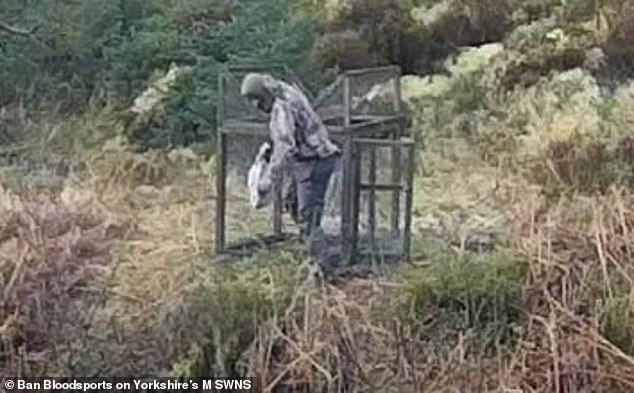 Cage traps, which are also known as box traps or live traps, are used to capture animals alive.

They are in the shape of a box, with the intention an animal entering the trap and the door shutting behind it. 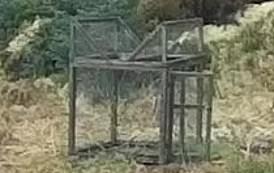 The traps do not grip the animal and therefore make release easy, and they are often used when there is a high chance of capturing an animal.

They are sometimes used to remove the likes of raccoons, opossums or skunks from buildings – but do not normally work with foxes.

PC Jeremy Walmsley, wildlife crime officer North Yorkshire Police, said: ‘The goshawk is one of the most protected species of bird in the UK and it is extremely distressing that an individual would choose to kill any bird of prey.

‘I appeal to anybody with information about this horrific crime to get in touch with the police and help us find the person responsible for the death of this magnificent bird.’

He added: ‘We see far too many incidents of birds of prey killed or injured in North Yorkshire and as a police force we are doing all we can to put a stop to this inhumane and callous crime.’

North Yorkshire has been named by the RSPB as the top spot in the UK for bird of prey persecution – accounting for 10 per cent of all incidents nationally since 2007 – because of the prevalence of wildlife crime on its grouse moors.

Scotland has committed to introducing mandatory licensing of grouse shooting moors within the next five years after facing a similar wave of wildlife crime, although it is anticipated that ministers could move sooner.

Despite the National Wildlife Crime Unit having briefed government and law-enforcement agencies since 2013 that ‘intelligence continues to indicate a strong association between raptor persecution and grouse moor management’ there has been no similar pledge in England or Wales.

Killing a bird of prey is an offence under the Wildlife & Countryside Act 1981 except in certain circumstances, like during the open seasons for game species or under the authority of a licence.

The Countryside Alliance have also argued that grouse moor management plays a key role in producing landscapes rich in both wildlife and biodiversity – and without it, the landscape of many upland areas would be threatened.

The UK is also legally bound to protect heather moorland under the 1992 Rio Convention on Biodiversity, and the evidence suggests that the reason the UK has largely retained 75 per cent of the world’s heather moorland is due to the presence of management for grouse shooting.

A spokesperson for the Duchy said: ‘The Duchy expects all shoots operated by tenants on Duchy-owned land to be professionally run and managed using skilled and experienced game-keepers.

‘Our tenancy agreements make it clear that we require the highest standards of professional behaviour and compliance with national standards and codes of practice.’