An Illinois museum has opened a theater where visitors can have conversations with Holocaust survivors through 3D holograms and sophisticated voice recognition technology.

The Illinois Holocaust Museum and Education located in Skokie just outside Chicago opened the theater as part of its new Take a Stand Center.

Fritzshall is one of 13 Holocaust survivors who tell their stories through holographic images.

On stage, Fritzshall’s holographic image nods, tilts her head and appears to listen to questions.

The technology not only supplies answers about her two years in Auschwitz, but if a child asks about her favorite color or food, the hologram can respond to that too.

This exhibit is unique as it marks the first time that 3D holographic technology has been combined with the voice-recognition technology.

‘We are the first in the world to have this and show it like this,’ said museum CEO Susan Abrams. 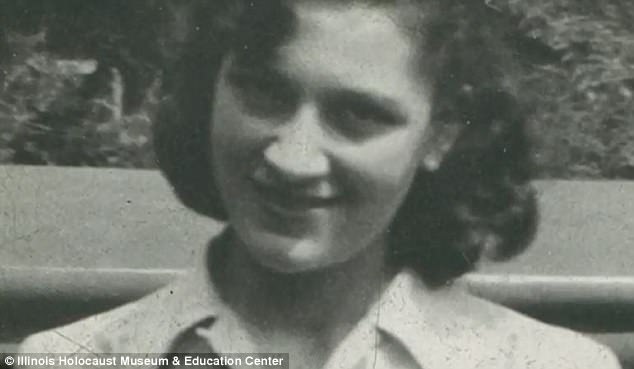 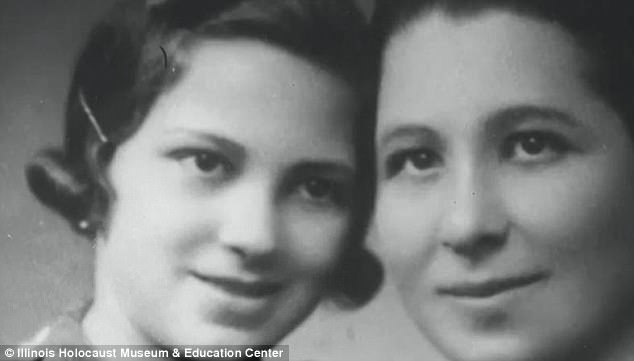 ‘We will be working with the Shoah Foundation to license this globally so that it can be seen by as many people as possible.’

The Shoah Foundation is based at the University of Southern California Hollywood and was founded by director Steven Spielberg to preserve as many survivors’ stories as possible.

It has been a three-year, $5 million project using New Dimensions Testimony technology.

Fritzshall had to answer around 2,000 questions about her life including the tragic night in Czechoslovakia when German soldiers banged on her door and held her family at gunpoint ordering them to pack and leave. 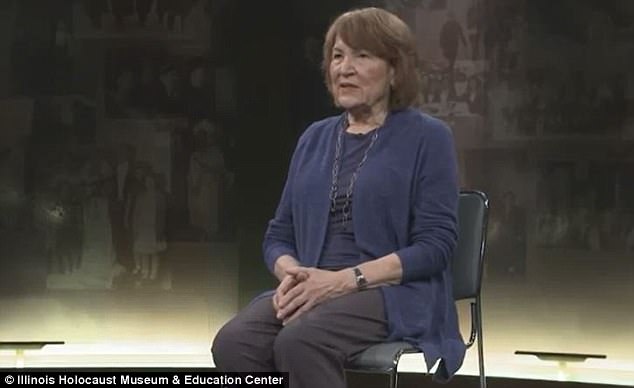 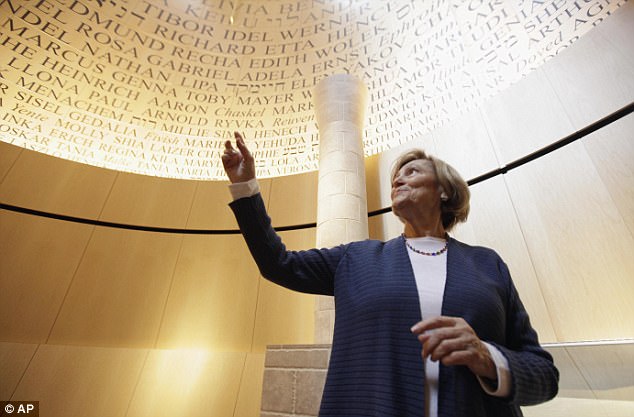 In this photo taken April 2009, Holocaust survivor Fritzie Fritzshall finds the name of a relative who perished in the Holocaust in the Room of Remembrance at the Illinois Holocaust Museum

The technology impressively turned her answers to those 2,000 questions into 30,000 responses.

Fritzshall was born in Czechoslovakia in 1929 and she remembers her evacuation from her home very well.

She said soldiers approached her door and her mother was ordered to take warm clothes, her valuables, to take whatever food she had and to march outside.

‘After many hours they took us to what was known as a ghetto area. They told us we were going to be relocated. They lied. And we believed.’ 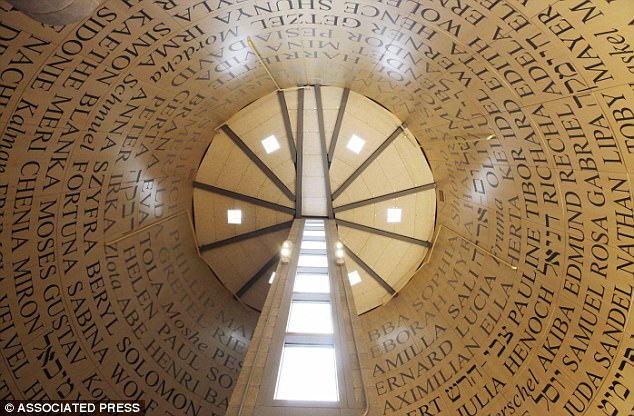 Pictured here are the first names of Holocaust victims written in Hebrew, Yiddish and English 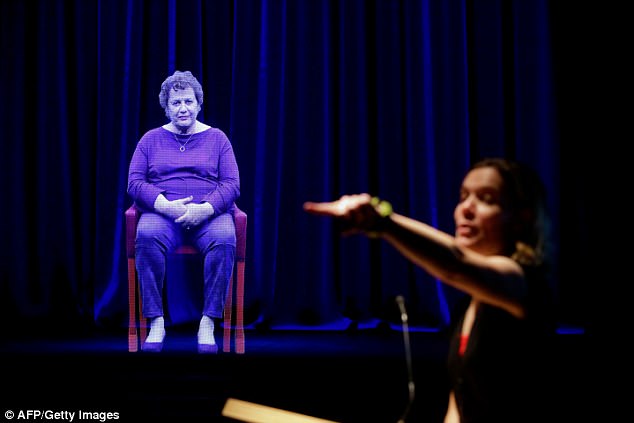 ‘When I am sitting in that chair I am back on the train, I am afraid,’ Fritzshall said.

‘I see the women holding infants, dead infants. I’m watching the entire scene at Auschwitz. I’m watching my brothers leave me, I’m hungry and cold and I see the trains coming in day in and day out.’

She spoke about arriving at Auschwitz with two younger brothers who then went missing forever. Her mother and brothers died. 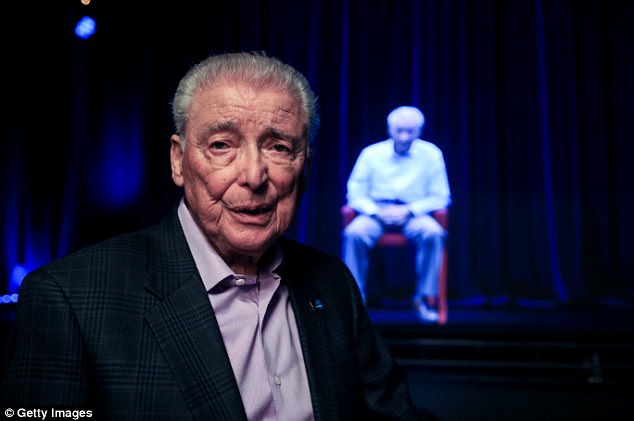 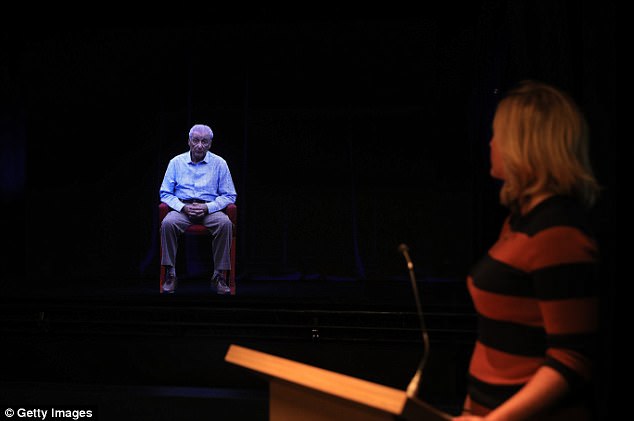 The 3D holograms have over 30,000 responses ranging from topics regarding Auschwitz and also simpler questions about their favorite color or food

She recalled the confusing ‘separation,’ where prisoners were ordered to get into separate lines. She remembered the moment she told her mother she was in the wrong line, not knowing it would send her to her death.

‘I have carried this for all this many years the guilt of my mother, that maybe she would have lived had I not sent her into that line,’ she said.

Fritzie survived by pretending to be older than she was, therefore a stronger worker. She recalled how a man told her to say she was 15-years-old when she got off the train even though she was 13.

‘I didn’t know that at the time but that man saved my life.’ She said otherwise she would have gone with the other children and gone directly to the gas chambers. 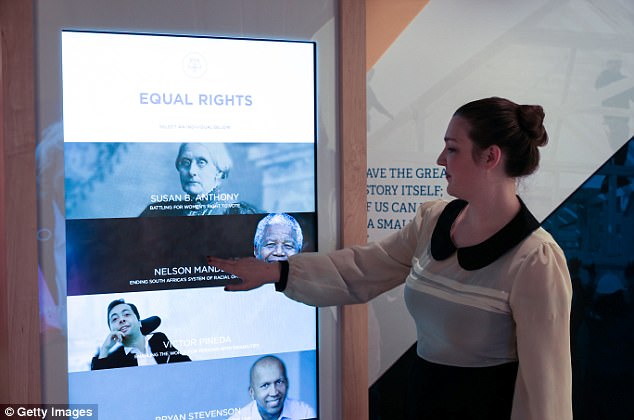 There are also touchscreen panels featuring historical and contemporary inspirational figures, among them Nelson Mandela of South Africa (pictured above)

On a death march from Auschwitz, she ran into a forest, where she was later freed.

She argued this type of exhibition is crucial in the current climate we are in: ‘Charlottesville totally brought that fear back into me,’ she said.

‘I see that and I think what happened to me can happen to your children, your grandchildren if I don’t speak out.’ 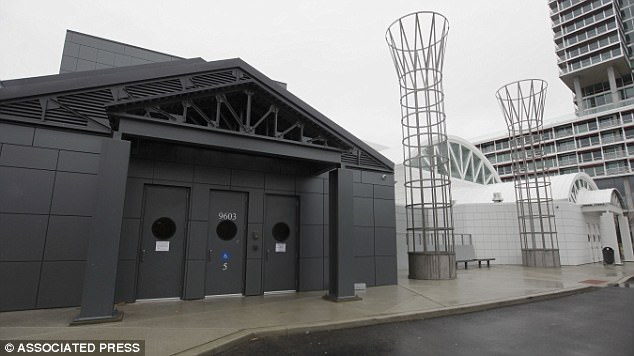