A violent tornado wrecked havoc on farmland as it touched down in western Canada on Friday evening, killing two teenagers and injuring another man.

Incredible video and images from storm chasers tracking its path showed the wave of destruction that followed as the storm formed into its dangerous spiral and tore across fields in Scarth, Manitoba.

Surrounding property and machinery was torn asunder in what is claimed to be one of the strongest tornadoes people in the area have seen.

Rescue services were called after a 54-year-old man became trapped in a vehicle that was flipped over by the tornado.

Two 18-year-old were also killed, the Royal Canadian Mounted Police confirmed Saturday afternoon, in a seperate vehicle close to where the man was trapped. 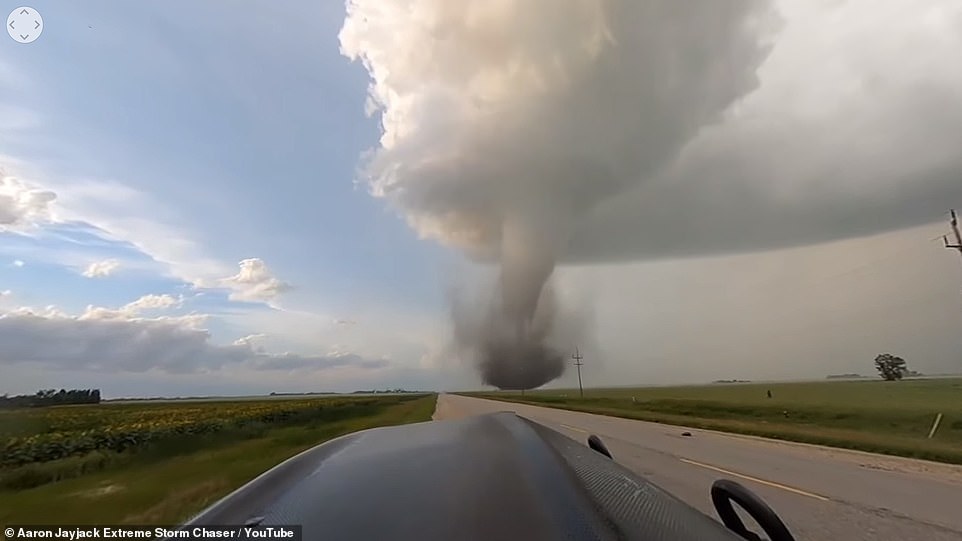 Two were killed in the deadly storm that storm chasers described as ‘surreal’. Another man was also injured

The teenagers – one male and one female – are believed to have been thrown from their vehicle when their car was flipped, said CBC.

Environment Canada confirmed that the twister hit at around 8pm Friday near Virden.

Video footage shared to social media showed the dark clouds forming as the storm swept down the highway and the majestic tunnel emerged.

Residents closer to where the twister hit shared terrifying videos of the dark gray wall of wind closing in on their homes.

The tornado is said to have ripped through several farms and thrown a few vehicles from its path.

‘It threw two different vehicles, one into the ditch. There were two occupants trapped in there plus there were downed power lines around the vehicle also, so that hampered the rescue operation,’ storm chaser Sean Schofer told CTV News.

‘Then the other field, I would say about 200 yards from the field, it threw another vehicle into the ditch… Unfortunately as it threw into the field, its occupant was thrown from the vehicle.’

Fellow storm chaser Aaron Jayjack also posted videos of the storm to social media, many showing the extent of the damage caused.

‘This funnel came down and it fully condensed down in the field,’ he said. 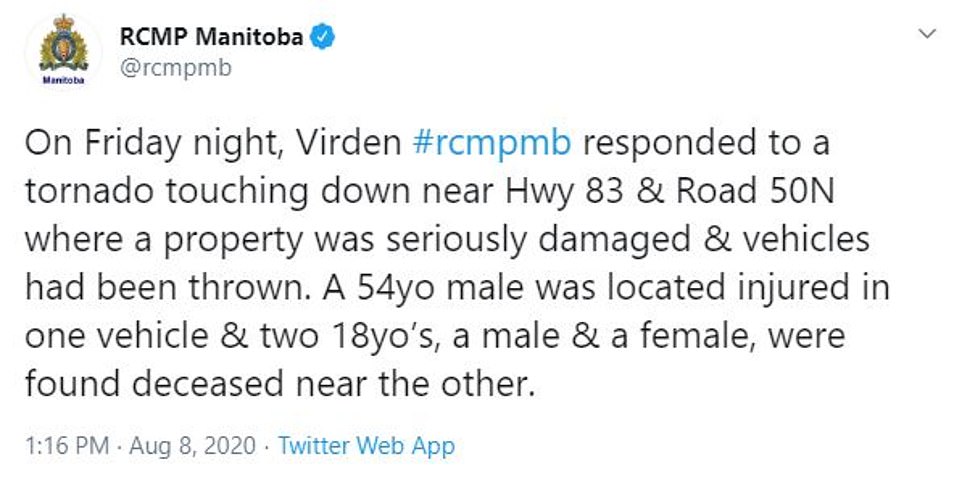 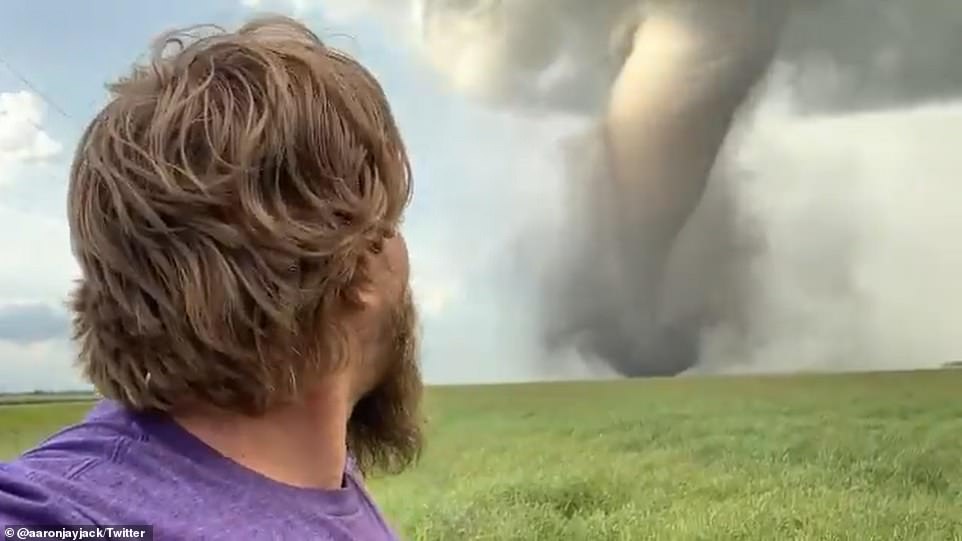 He added that a tornado of this scale is rare to see and that it was on land for between ten and 15 minutes.

‘It was an incredible tornado. It was very powerful, very big. Unfortunately, somewhat damaging.’

His fiance Misheyla Iwasiuk, also a storm chaser, told CBC  she was overcomes with emotion on seeing the storm touch ground.

‘It was an amazing sight to see,’ she said. ‘Then, unfortunately, we witnessed it doing some pretty severe damage, which was really gut-wrenching to watch happen.

‘We really didn’t have to move; it was coming right for us, so we just sat on the highway and watched this very large storm cross the highway behind us.’

‘I wouldn’t be surprised if it got a really high rating,’ she said of the storm’s power. ‘It was very big, and quite violent.

‘It was a very surreal scene. I’m still having a hard time wrapping my brain around it.’ 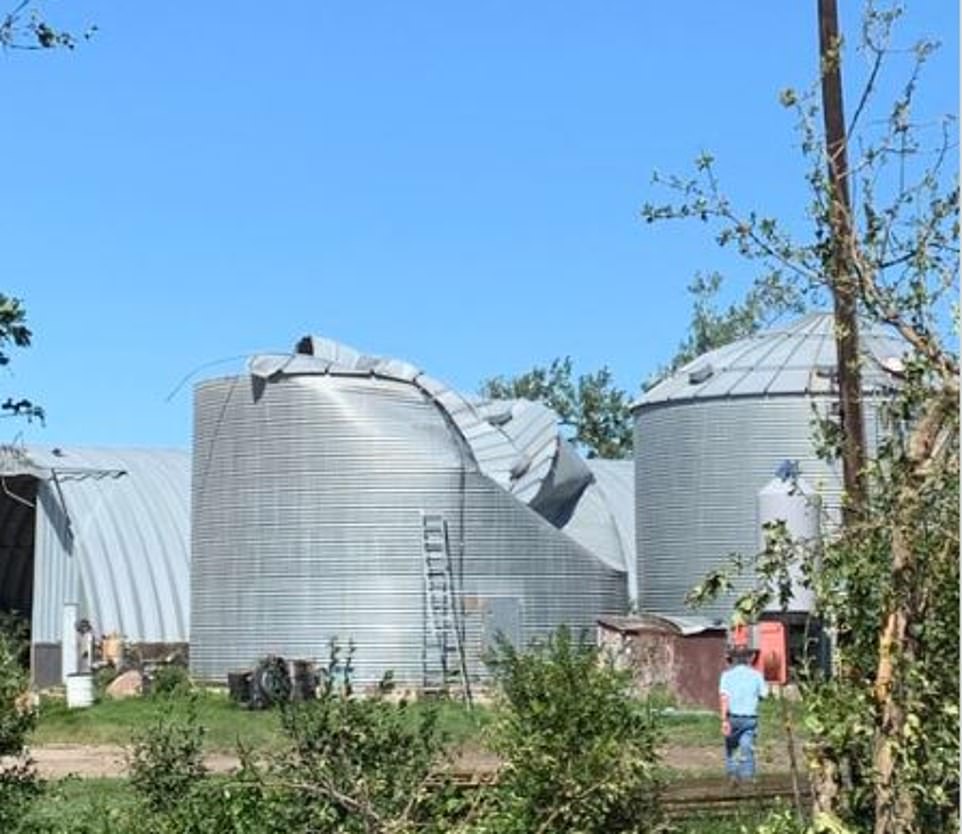 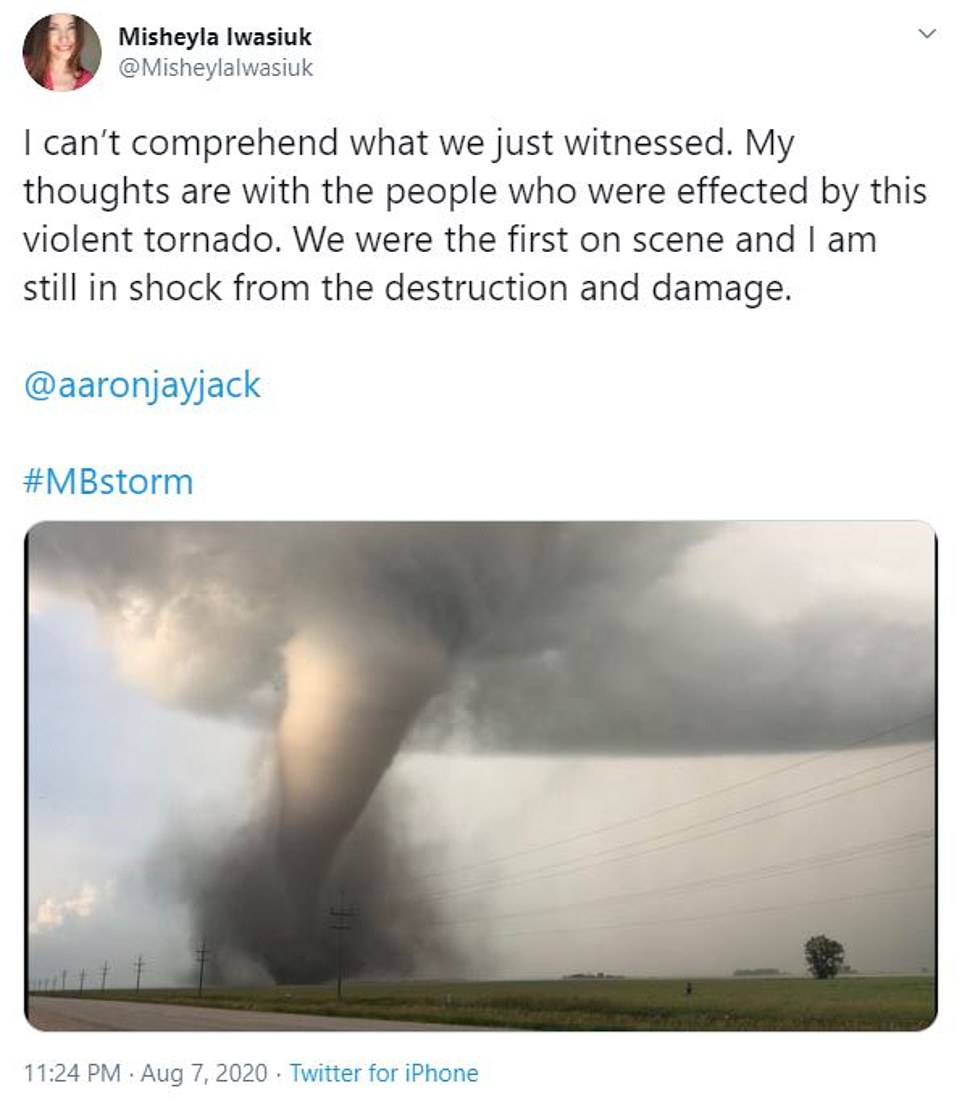 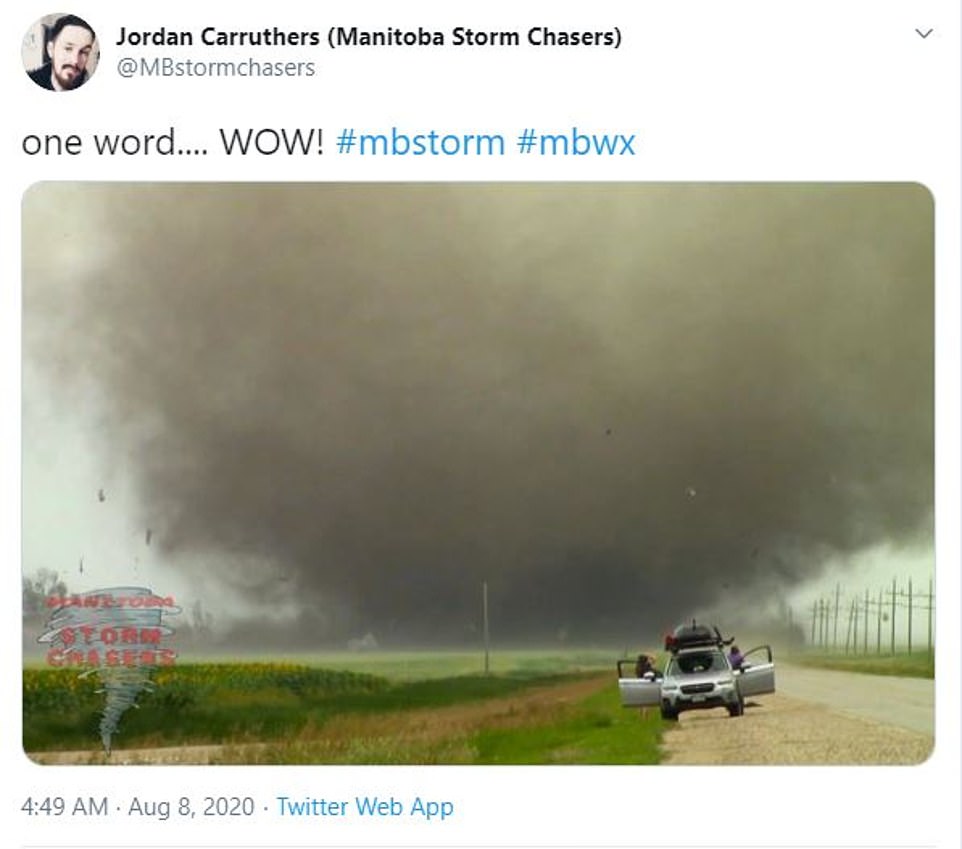 Jayjack said that the twister first looked ‘like a cloud of smoke on the ground’ but quickly shaped itself it a full funnel as they watched it approach the nearby farmhouse.

He said that they were the first on the scene once the storm had passed on but that nobody was home.

The couple shared imaged of a red Jeep Grand Cherokee that was found upside down in the driveway of the farmhouse with a person inside.

‘We yelled out to see if there was anyone there, and that’s when I heard that someone was strapped into that vehicle,’ said Jayjack, who quickly called 911.

STARS Air ambulance said they were dispatched to the area shortly before 9pm because of a person trapped in a car but called back.

According to Wallace District Fire Department, the man from Sioux Valley Dakota First Nation was successfully taken from the car and brought to hospital with non-life-threatening injuries.

The vehicle belonging to the deceased teens was found more than a mile away. 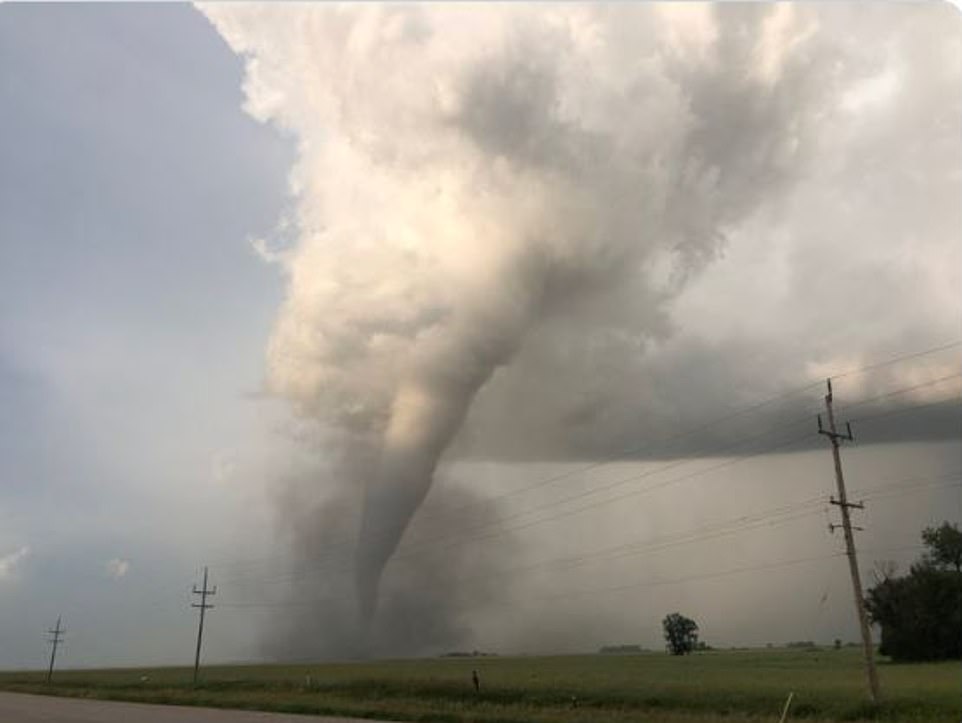 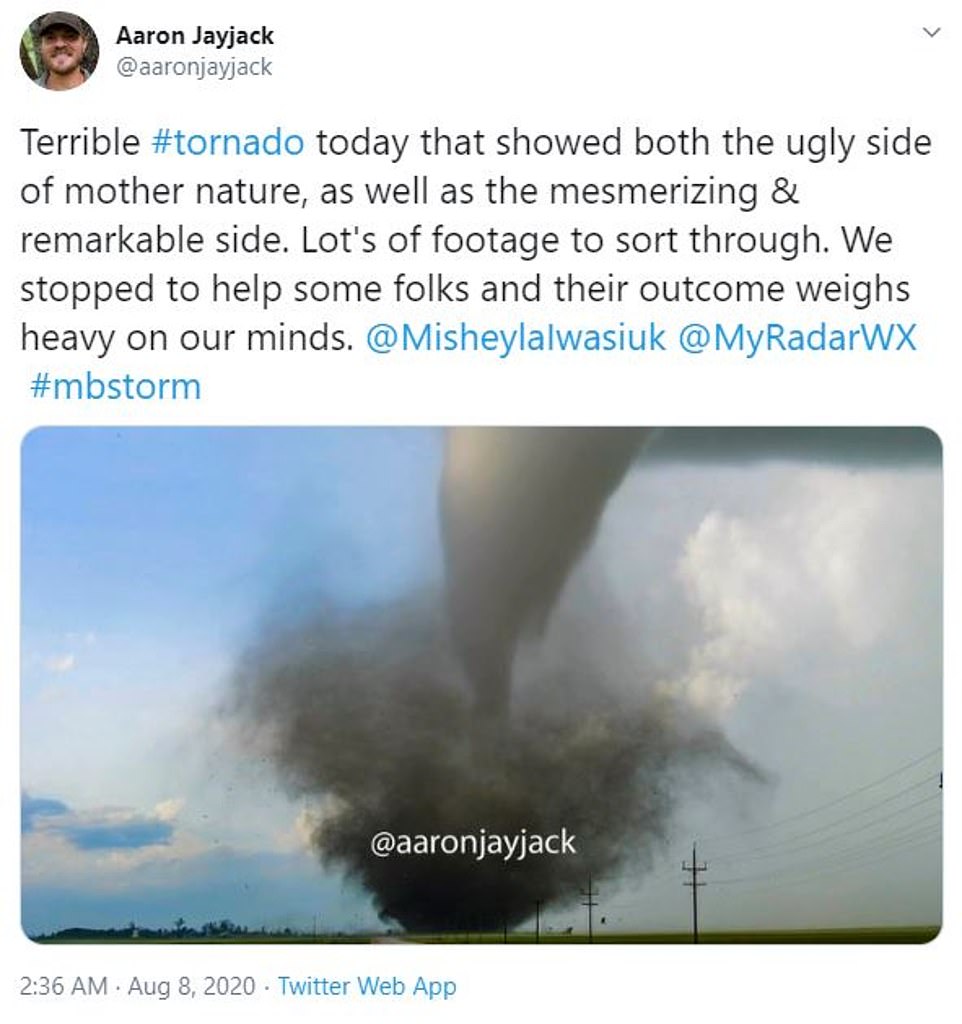 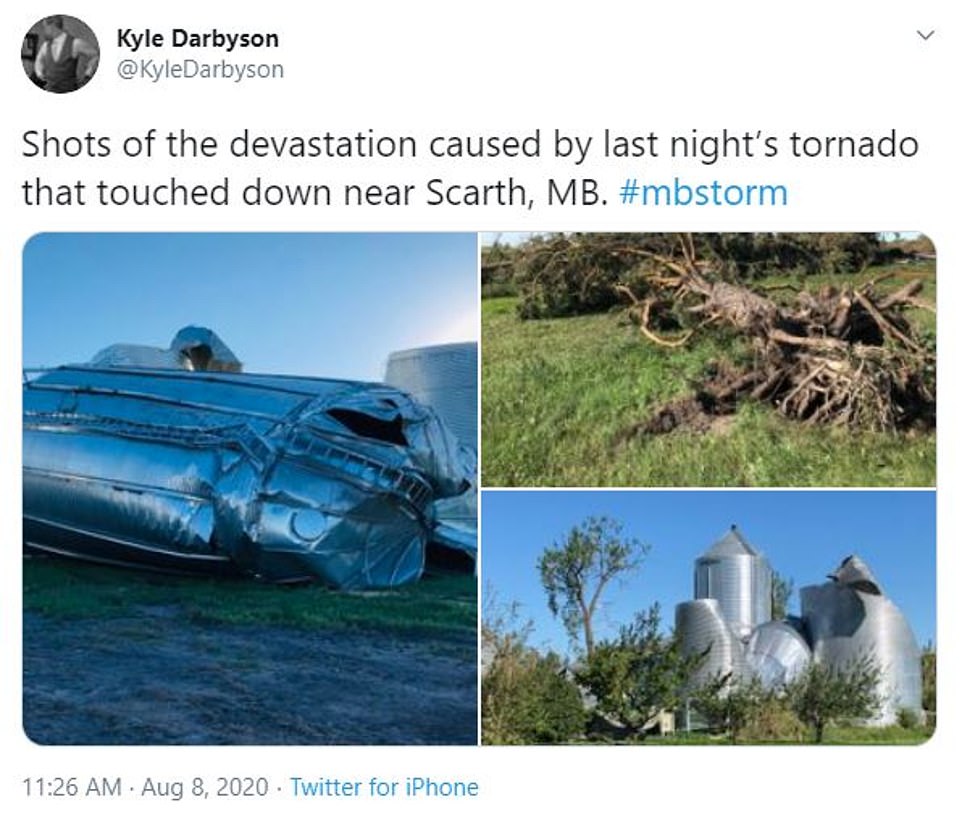 The tornado tore down trees and destroyed machinery, killing two and injuring one other person

Jayjack, who storm chases for MyRadar Weather, said that the man had asthma but was otherwise unharmed and they kept him talking until the first responders arrived.

‘As much as it’s incredible to see [a tornado], it’s really hard when there’s destruction and damage, and people’s lives have been impacted,’ Iwasiuk said, adding that the pair left the farmhouse as soon as help arrived.

‘It’s very sombering and my thoughts are with everybody.’

Fire Chief Brad Yochim confirmed a local farmyard took a ‘direct hit’ but that no injuries were reported.

‘Several grain bins were destroyed but the home was not damaged,’ he said.

A search dog was also taken to check the area.

The tornado caused damage to power lines cutting off electricity for 500 customers and making search and rescue attempts more difficult. 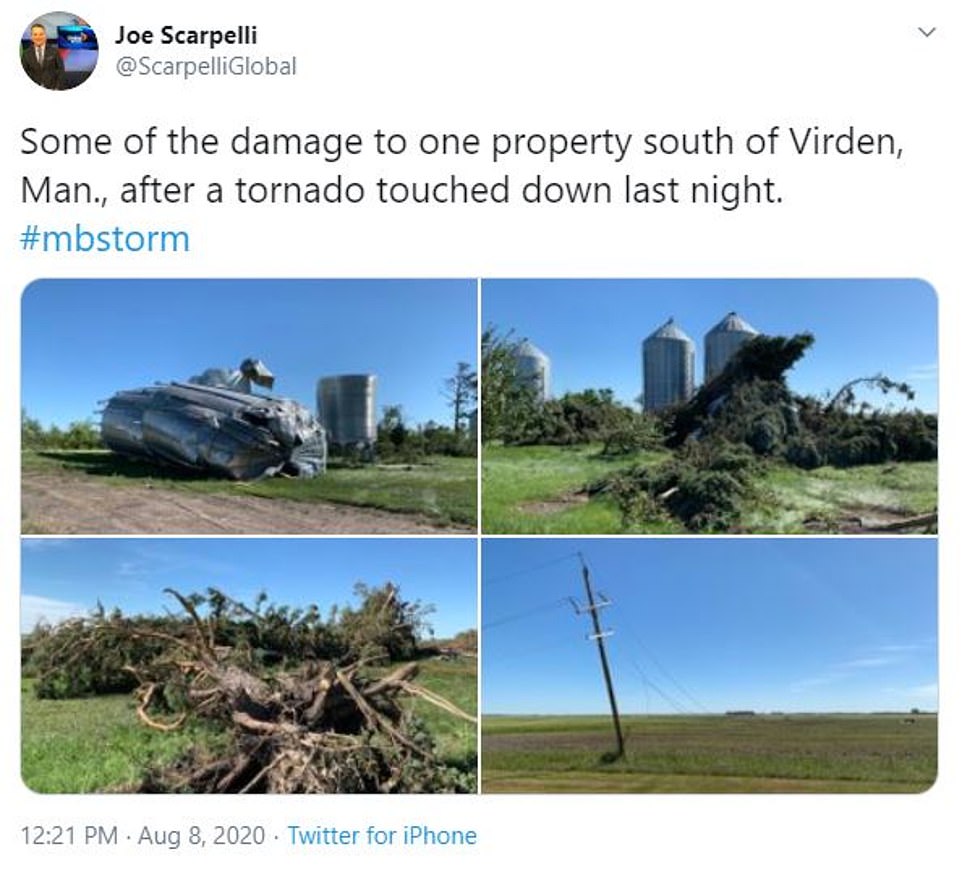 The aftermath of the storm showed horrific damage to local farms 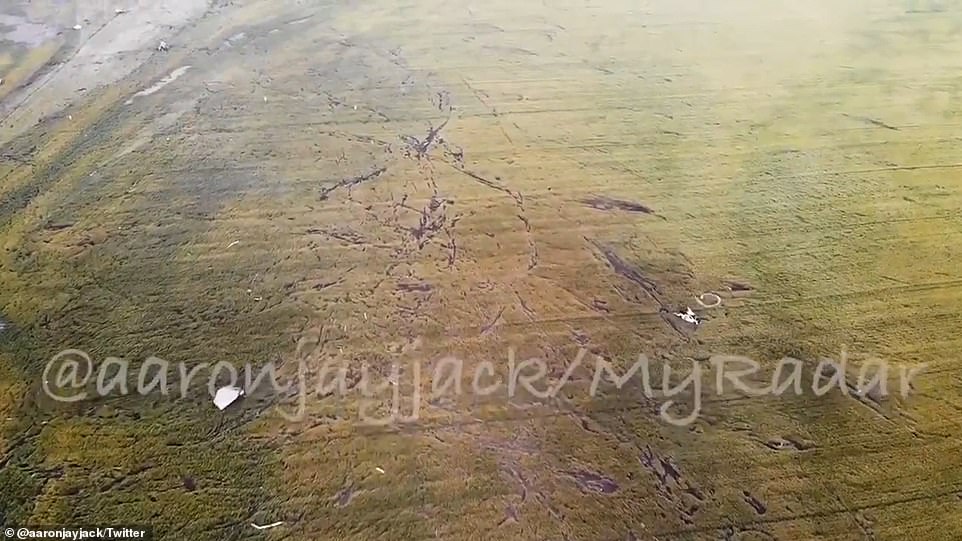 As of Saturday morning, power to all but six customers had been restored.

‘All but a half dozen customers are restored. Fortunately, the tornado missed critical transmission lines, but we have to replace a number of wood poles and power lines to get all customers restored.

‘The tornado scattered poles, wire, transformers and other hardware.’

The storm continues to move southeast and residents who see severe weather are urged to take shelter.

Another tornado watch was issued for the Rural Municipality of Pipestone and Sifton, but was later downgraded to a sever thunderstorm watch.

On Friday night Manitoba Premier Brian Pallister sent out a tweet in support of the community hit by the storm.

‘Our thoughts and prayers go out to the residents of Virden and the emergency responders dealing with the aftermath of the Tornado – please stay safe,’ he said.